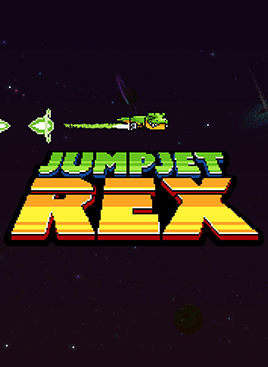 There are certain natural combinations that, once discovered, change the very nature of the world.  Peanut butter and chocolate, camp fires and ghost stories, summer and superhero popcorn movies.  JumpJet Rex adds a new one to the list, and that’s dinosaurs and rocket boots.  It turns out they were made for each other all along.  Who knew?

Dinosaurs, as it turns out, were a technologically advanced group of species, and Rex was the first into space.  While up there he discovered an asteroid heading straight for earth, and now has to plow through dozens of levels using only the power of rocket boots to… um… yeah.  The internal logic is a bit nonexistent on this one.  The point is, you’re a little t-rex with rocket boots that let you perform both an infinite-jump (like double-jump only way more) and dash.  Each use also shoots out a puff of exhaust that doubles as a bullet, slowing down the invulnerable enemies or destroying the weak ones, but for the most part you’ll be using the boots to fly through a huge number of 2D free-scrolling mazes and obstacle courses.  Finally, Rex can do a quick fall that doesn’t do much in the way of offense but is a great way to shave a few seconds off a drop.  Complete the level, earn enough stars based on your performance to open up the area boss, beat the boss, get more levels.  Nothing fancy but it gets the job done, and the creativity is saved for the variety of level styles and challenges.

While the building blocks of each level are roughly the same, every one requires creative use of Rex’s abilities to not only clear but race through at high speed.  In the standard mode there are three stars to chase after per level- one for clearing it, another for making it through on a single life, and the last for beating a target time.  JumpJet Rex is designed around the idea of perfecting its levels, practicing the timing of laser gates, falling goo blobs, or icy stalactites while taking risky shortcuts by dashing through thin gaps in thorny blocks.  Checkpoints are generous but even so, if you die you’re not getting either the one-life or the speed stars.  The requirements for advancing are fairly generous, but even so you’ll want to maximize the take from the earliest levels to make up for how difficult that later ones are. 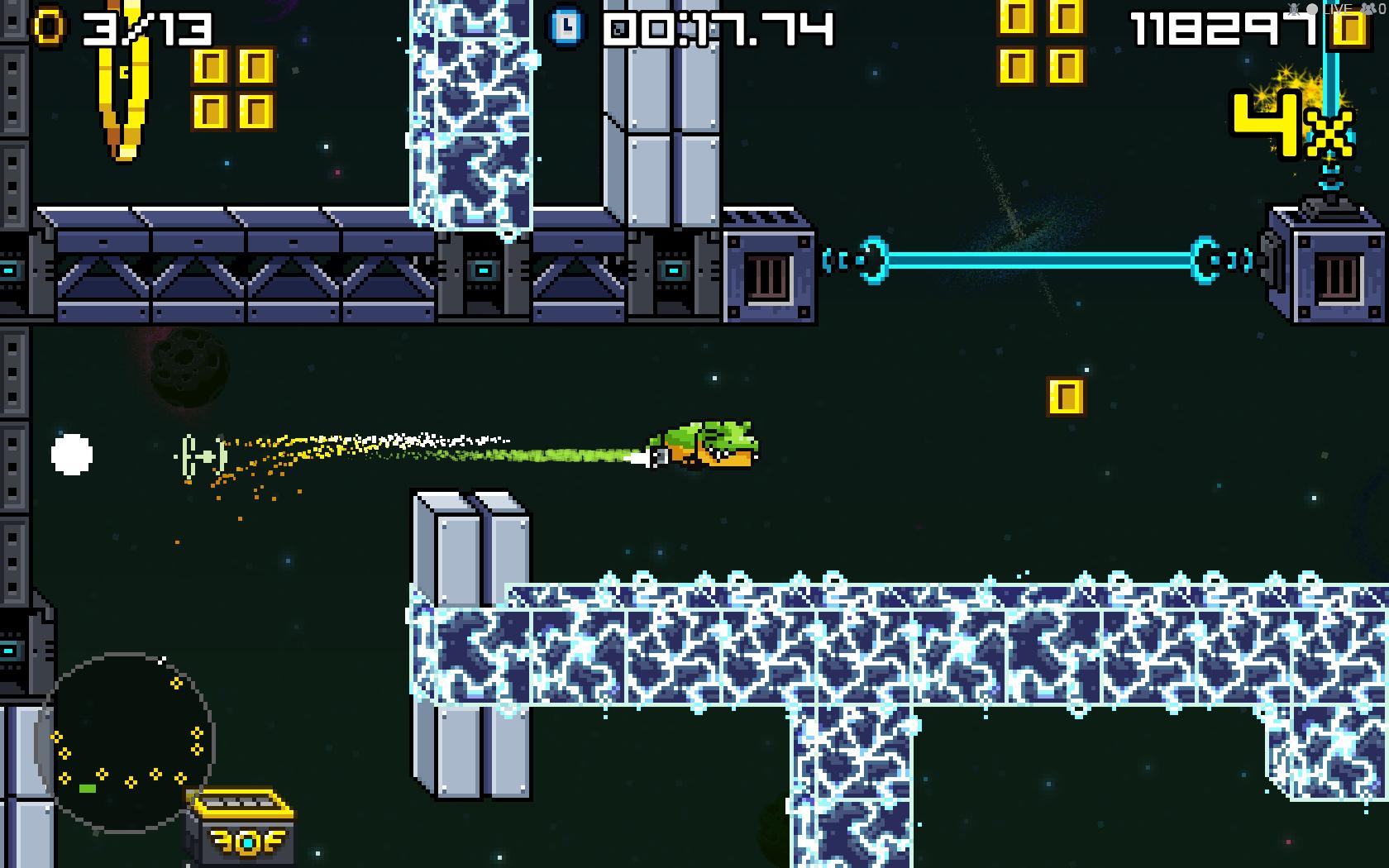 Progress through each level is measured by the number of large gold rings Rex has flown through.  Some levels are traditional “point A to point B” run while others are more open, and a few are even designed as small, tight circuits through repeating hazards.  Get all the rings and the gate opens, but it’s hard to focus on racing everywhere when there’s secrets to chase after.  Each level has a secret area or two with bonus coins or a package hidden in it, each of which has their uses.  Rex may be a cute little green and yellow t-rex but after a bit of shopping there’s any number of things he could be.  Different colors are available, as are many types of head, although I have to admit my favorite look was the default.  Rex is a cute little guy and doesn’t need a lot of dressing up to enhance his appeal.

Much as I like Rex as a character and enjoyed the idea behind the game, though, I never really took to JumpJet Rex.  The pixel art is fantastic, the level design is creative, but the difficulty level for a speed-runner is tuned just a little too high for enjoyment.  Once you get to roughly the halfway point, earning at least two stars becomes a matter of trial and error and error and error, and too often the feeling from completing a level was less that of victory than relief.  Dashing through a string of falling goo-balls, between a spiked gap half a block wide, straight into the firing zone of an unfriendly robot is a nice challenge when the clock isn’t ticking and you aren’t being graded on survival, but add that pressure to the run and the endless restarts start wearing you down.  This can be dodged by choosing Speed Run mode, where each level only has one star to earn and the clock is ticking away timing how long it takes you to complete the whole game, but then it feels like the game is penalizing you for exploring its secrets.  The game and its goals are slightly out of synch, leading to the feeling that playing it according to its rules is a very different thing from playing in a way that’s actually fun. 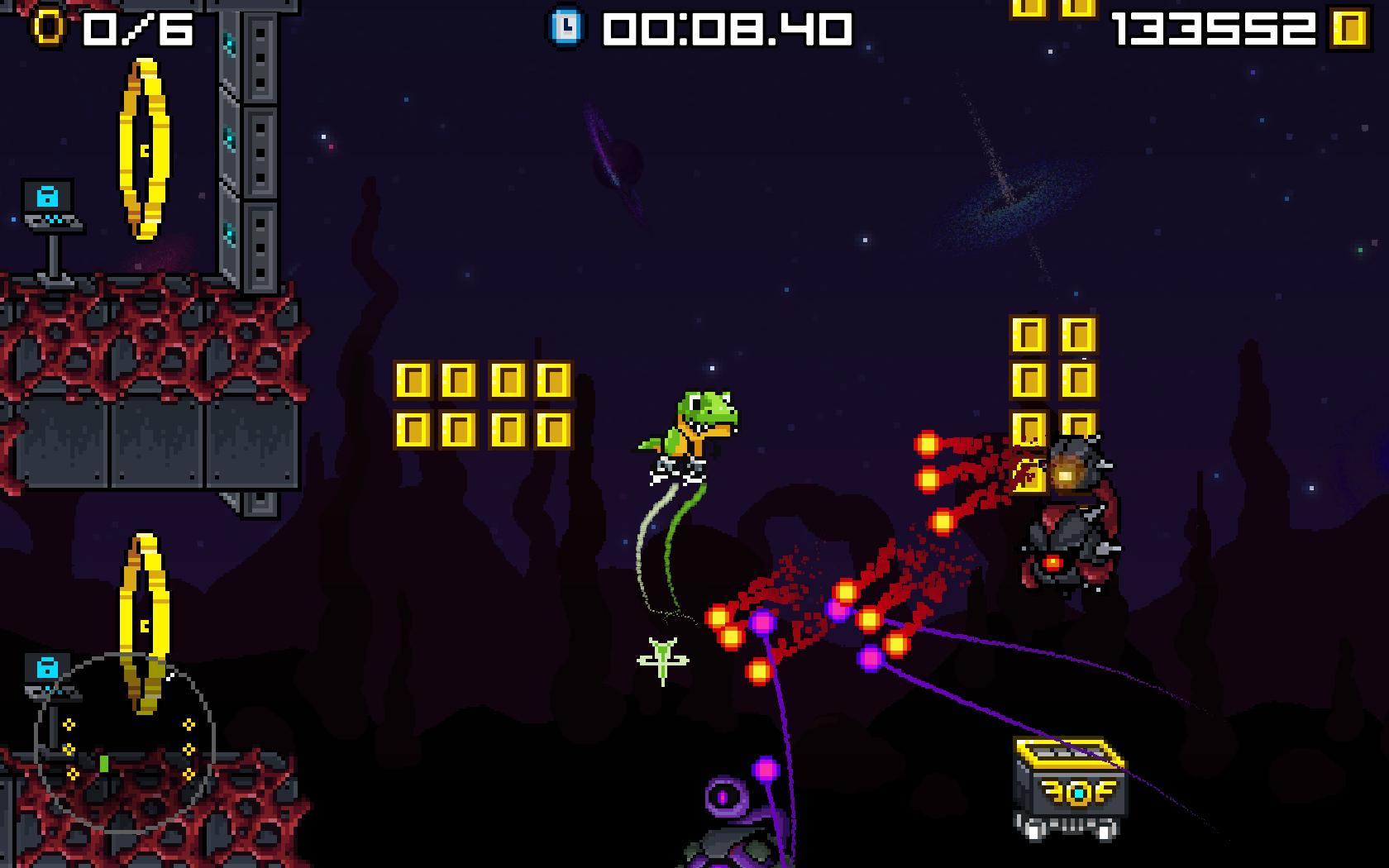 JumpJet Rex should be a resounding success.  It’s got all the elements there but they don’t quite fit together right.  The level design is excellent, Rex is a really cute little guy, and his move-set is well thought out.  Put together a good combo of dashes, multi-jumps, and fast drops and Rex flies through the level never touching the ground.  It’s great when it works, until a single hit ruins the run and requires restarting the level yet again.  Ignore the goals and play for the fun of it and JumpJet Rex is a great little platformer (that doesn’t need platforms, oddly enough), but play it in the way it’s designed to be played and it feels like the game is fighting against you every step of the way.