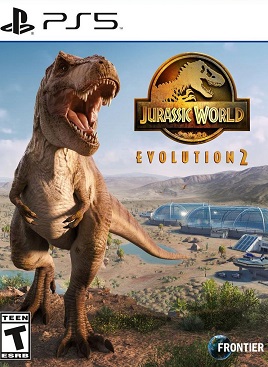 For someone who never watched the movies but understood the concept, creating a “Theme Park” styled game based on the idea of building and maintaining a dinosaur themed makes a lot of sense. Management games are fun, and the idea of filling a park with extinct creatures just works. Of course, basing the property around a film series that highlights the inability to control a natural force beyond man’s understanding and the ruinous effects of greed kind of undermines the undertaking. Game developers have applied this formula to this franchise before and it came down to “ignore the message and enjoy the roars.” Alternatively, I may be assigning more meaning than intended to a series of popcorn flicks with two good entries. Fortunately, Frontier Developments does a great job with Jurassic World Evolution 2 by building a game that acknowledges the themes of the series while allowing players to build a park of their dreams.

There is a story behind the game beyond park planning, taking place after the events of Jurassic World: Fallen Kingdom. For those that don’t remember anything from that film beyond the mischievous smile of the hybrid dinosaur immediately before it pounced, you’re not alone. Basically, it ended with dinosaurs escaping into the United States, sending the country into a state of chaos. The player of Evolution 2 is tasked with cleaning up the mess while working with the Department of Fish and Wildlife and the CIA. Building up parks in various locations around the nation, it’s up to players to capture and display the creatures to learn more about them in hopes of being better able to adjust to the new natural order. With a focus on conservation, the tale actually serves as a primer on the need for animal conservation in the real world, which is cool.

While the above covers the basic plot, it must be admitted that the campaign serves more as an extended tutorial for the other modes in the game. First is Chaos Theory, which tasks players to basically accomplish the tasks that the characters in all five films were trying to do, but actually succeed. There’s also a challenge mode that drops players into a difficult situation, demanding a decent level of proper delegation, budget management and smart planning. The real meat of the game comes in the sandbox mode. As the name implies, this allows the player to run a park in proper tycoon fashion, building the perfect enclosures to captivate visitors, keeping on top of maintenance and earning enough to keep expanding. This mode is likely to become the destination mode after finishing the campaign as it scratches the business game itch in a surprisingly accessible way. 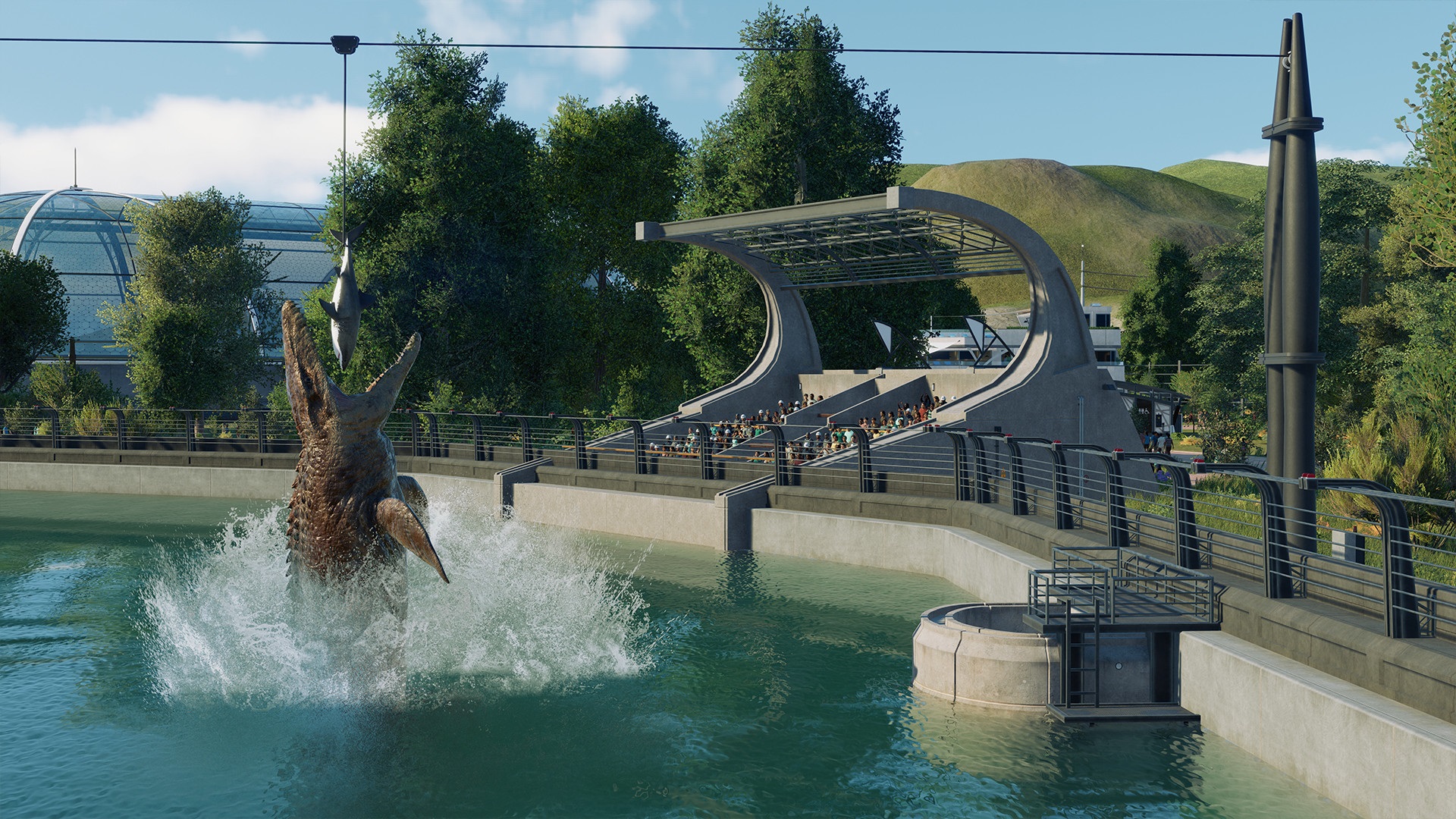 To circle back to the story stuff for a moment, Frontier Developments managed to get many of the film actors to reprise their roles as voice actors, and they do a great job. With all due respect to the likes of BD Wong and Bryce Dallas Howard, it’s likely that most would be interested in Jeff Goldblum because it’s Jeff Freaking Goldblum. He is here and it sounds like he really wants to deliver a firehose deluge of Goldbluminess. In other words, he hams it up. This might have been just a paycheck for him, but he tries to earn it. On the other end of the spectrum would be the Chris Pratt soundalike. Whatever your opinion of the Pratt is, the character of Owen was nowhere near this obnoxious in the movies. Sounding like somebody who took too much espresso, his dialogue is just the worst. Same goes for new character, Cabot Finch, who brings down the experience.

To be sure, no one is coming to a management game for the story; they want to build. This is where Jurassic World Evolution 2 shines. Everything is laid out in an intuitive manner, making figuring things out easy after the basic explanation of where things generally are is complete. As an example, I ran into a situation during the second campaign setting where the player has to capture a rampaging Allosaurus and get it comfortable before the story proceeded. Because I was stupidly trying for a longshot hit with the tranquilizer dart (to earn an achievement), the dude managed to break a bone in the forest before I got him home. So, before I could get its comfort level up, I had to figure out how to build a medical facility, transport the creature there, assign a scientist with the proper medical level and heal it. Without being shown the ins and outs of this system, this was accomplished with no hang ups. In other titles of this ilk, it would not have been so easy. Of course, when this task was accomplished, it went back to its enclosure and the next story task started: the stupid thing broke a bone and needs to be healed. One would think such a fearsome creature would be more sturdy. 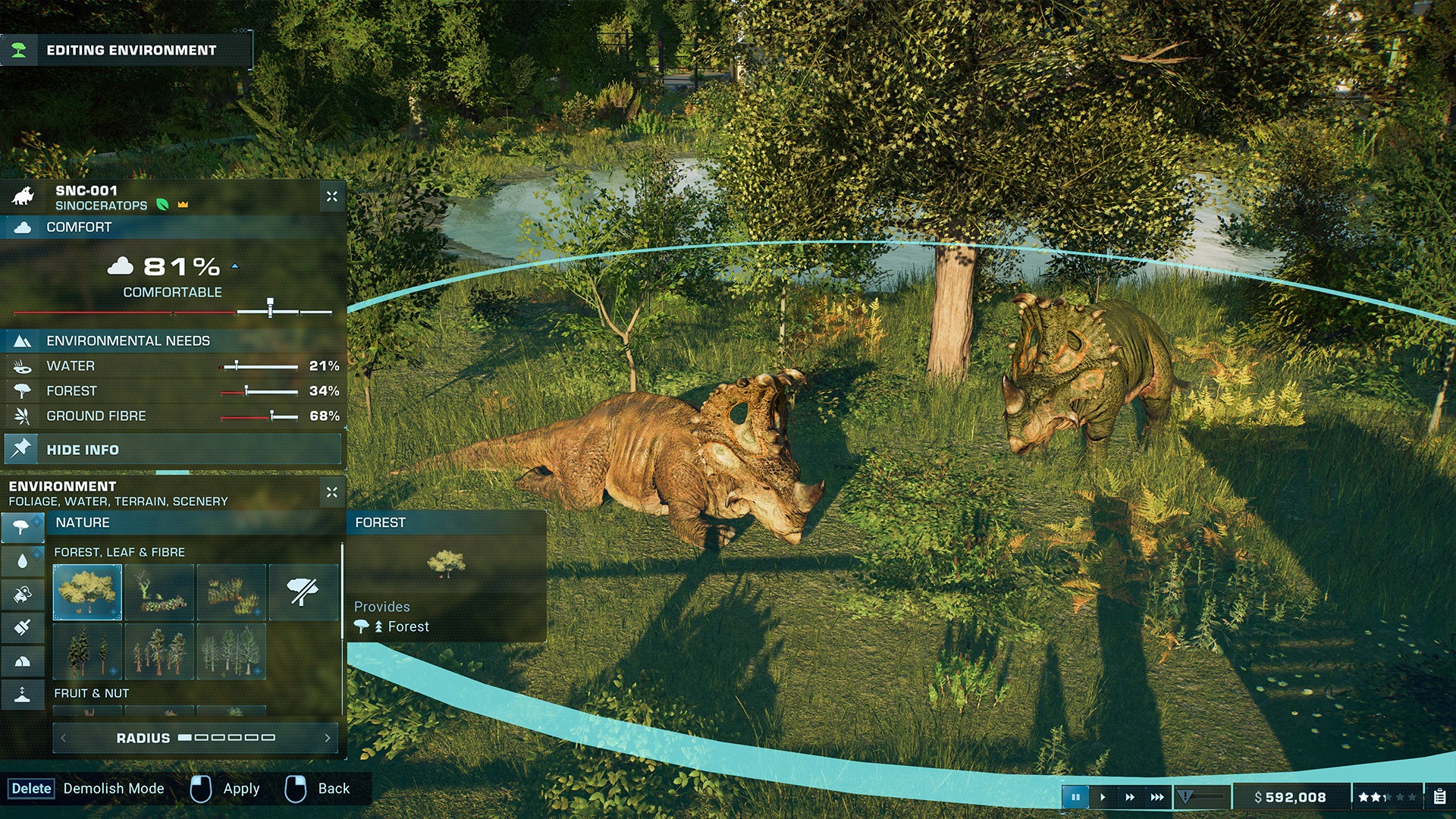 It’s not all great, though. Part of the tasks is building the enclosures and getting the environment just right for the inhabiting beast. The game would tell me that the thing wants some ground nuts, which fine. A dinos gotta eat. So, it’s a simple matter to plant tree nuts all around the space. Apparently, I overdid it, though, as it was now missing open space. Fair enough. Narrowing the radius of the circle so as not to go overboard, I clicked once to remove a small swatch of the ground nuts. Then I was informed that in needed more of the nuts. I added the nuts right back and was told about the lack of open space. Expanding the already large enclosure seemed like the next logical solution, so that was done. All sorts of open space right there, and it can chow down on nuts to its heart’s content. But wait, the open space is two feet outside of the radius that the dino registers, so that wasn’t good enough. So now I am left with trying to figure out how the heck I’m supposed to satisfy this thing with the soundtrack of my wife’s laughter bolstering my mood. This particular issue managed to pop up a few times during play, and I never figured out an efficient way to balance the differing animal’s needs, which lost too much money. In a game with a heavy emphasis on stacking cash, this is frustrating.

Also holding the game back is the vehicle modes. Players will be able to commandeer ranger jeeps and helicopters, allowing them to get an up-close view of the dinosaurs and perform jobs like administering tranquilizers and medications or performing status checks. Sadly, doing this is simply no fun. The land vehicles feel sluggish and unresponsive; the physics not conveying any sense of the joy that should come through zooming after an escaped Tyrannosaurus. The helicopter functions slightly better, but still detracts from the experience. It’s best to just suffer through when the game forces the player to do these tasks and assign the AI to handle it the rest of the time. 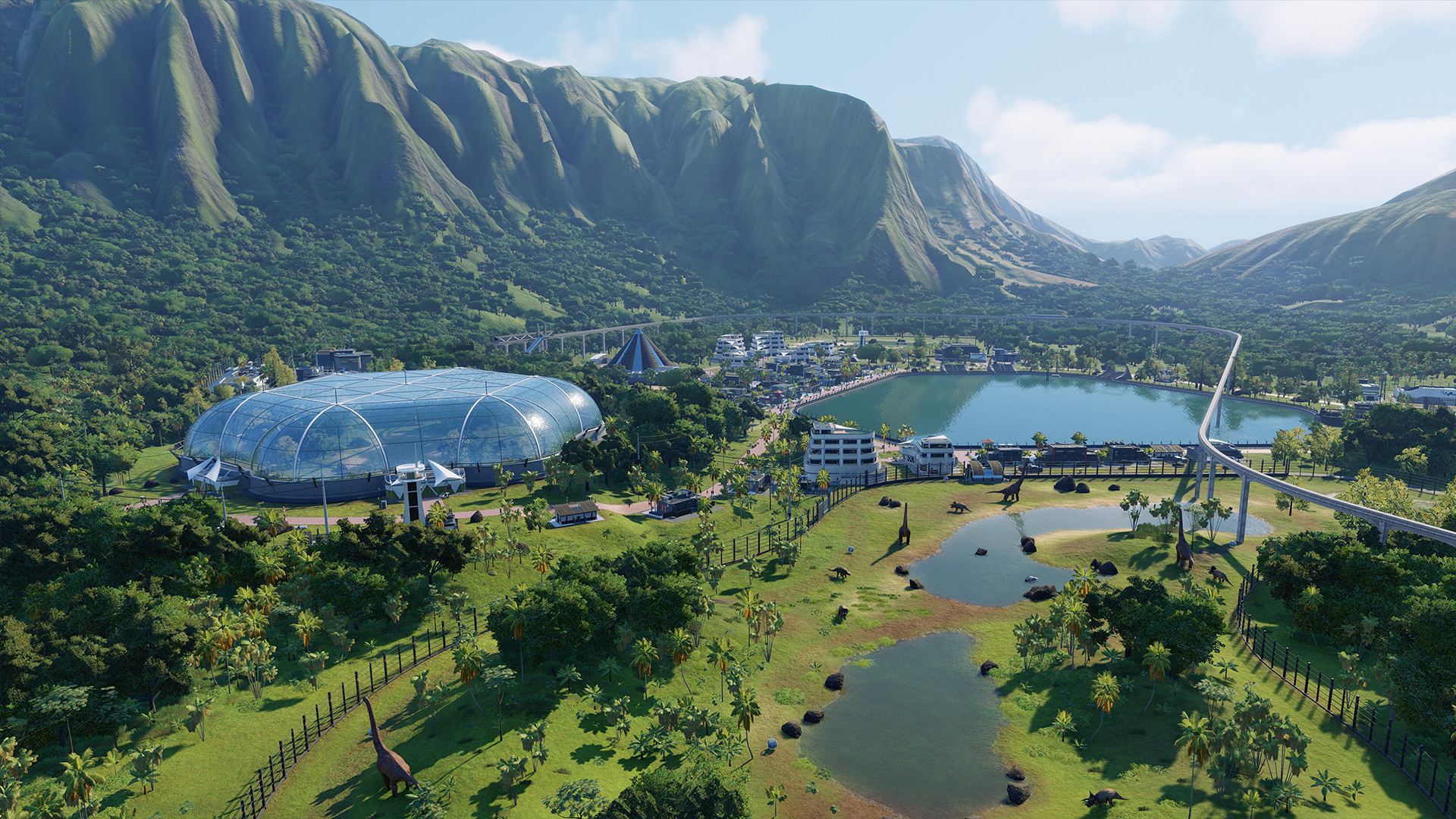 One thing that adds to the wonders can be found in the various dinosaur’s animations and behaviors. While the texture work on the PlayStation 5 version was slightly underwhelming, the way the creatures move and act sells the majesty of the prehistoric beings. The aforementioned Allosaurus managed to find itself a longpig nummie, and watching it toss the hapless visitor in the air and catch it in its slathering jaws shouldn’t be as funny as it is. Watching a pair of Ankylosaurus poke around their environment was relaxing and interesting the way taking in a friendly nature documentary can be. When things are running smoothly, it’s fun to zoom in and just watch the dinosaurs do their thing.

There’s also a decently robust tech tree in the form of the research system. During the course of the game, players will need to recruit scientists. These employees will be able to research building upgrades to enhance training, protect against storms and so on. Medicines for new diseases will need to be created. The most interesting is in learning to dig into the wide variety of creature’s genetics to unlock new traits or create hybrids that only a moron would think is a good idea. With the system and the constant drive to add more and more dinosaurs to the menagerie, it will take a long time before everything worthwhile is seen and done. There’s a lot of meat on this game’s bones.

One last thing to note: as this is a dinosaur-based game, some kids are going to interested in picking this up. Parents who are paying attention may take umbrage with the T rating. While I’m not a parent, I would have no issue with my nephew giving this one a whirl. There are some scratches and damage to the dinos’ skin, and people do get eaten bloodlessly, but the game doesn’t focus on this. In fact, it’s an educational experience. As someone with an active interest dinosaurs, I was surprised to be introduced to beasts that I had not heard about before. As the game is easy enough to pick up, this might be a good fit for family night. 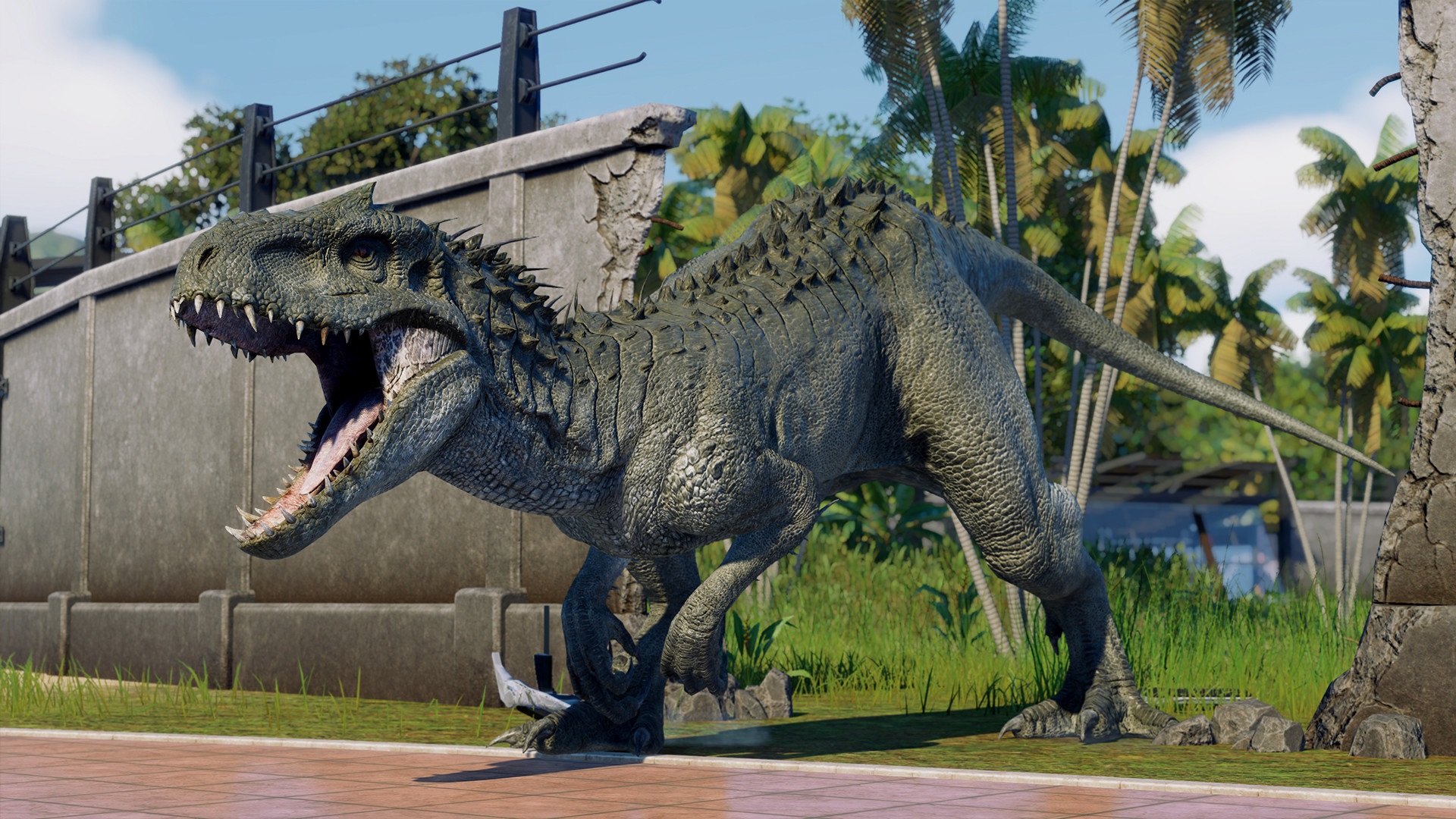 The fact that Jurassic World Evolution 2 is a worthwhile game isn’t surprising. Frontier Developments has a fantastic track record with this kind of game, as proven in Planet Zoo or the first edition of this title. What works in this game’s favor is the expanded roster of dinosaurs, the new challenges and the fantastic animations and behaviors of the exhibits. Being a licensed game, the temptation towards being simple had to have been strong. Some would argue the first game swung to hard in the accessible direction. With this newest iteration, the game walks the line of easy to understand but deep enough to remain engaging. Despite frustrations, Frontier Developments, much like life, found a way.