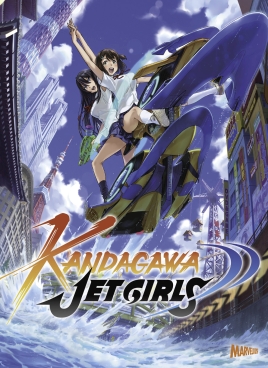 The Kandagawa Jet Girls anime is tailor-made for a gaming experience. It’s a team-based watercraft sports-themed anime with all kinds of long-range weapons being used during races. It’s also got some cheesecake mixed in, so it checks a lot of boxes and manages to stand out when it comes to concepts being used for anime-themed games. While action RPGs and Warriors-esque games are the most common, there aren’t a lot of watercraft-themed games on the market and that concept alone is what excited me about this game — especially with the addition of weapons truly making it unlike anything else in the racing sub-genre. In video game form, the fanservice is downplayed in favor of focusing on the relationships between the characters and the core racing action.

This shift in tone is jarring at first, but when you come into the game as an exploration of the characters with a wrapper of a more action-packed water-racing game on it, the change in tone works out better. The main characters are Rin and Misa, with the former being a bubbly young aspiring jet machine racer and the latter being a bit of an ice queen. Her sister was always better than her and rather than be in her shadow, she quit — but still has the skills to make Rin a better racer while she shoots crafts and the water expertly to win races. There are quite a few stories told here, with Rin and Misa first becoming friends, building that bond up, and then expanding on their rivalries and uneasy alliances with the other characters. There’s a lot of slice of life comedy thrown into things and the story mode is a mix of visual novel and racing action with a 60/40 split. The visual novel portion of things works out shockingly well given that the anime could make this part seem redundant, but instead of just retelling stories told there, they go into more depth on threads mentioned in the show – making the game a worthwhile piece of content for fans of the show.

Like the anime, the game has you pilot a jet machine with both a shooter and driver — with the player controlling both roles at once, but a button press allows you to control the shooter with more accuracy. The racing action is a blend of kart racing with combat and a touch of WaveRace mixed in. Tricks are possible and help you with end-stage objectives and boost perks, but aren’t something you have to rely on to win. Proper weapon usage, a touch of power-ups and old-fashioned skill will win the day here. Kandagawa’s racing mechanics may seem cumbersome, but they all flow from one skill to the next easily in the heat of battle. Shooting is a breeze and allows you to use your baseline gun to slow your enemy down a bit — while a power-up can enable things like mines or water missiles to deal out more damage and keep them down for a longer period of time. While these won’t help you a ton in the early going, they can save your bacon during the final lap of a race that isn’t going your way. You can also get some help from turbo boosts both saved up and in boost pad form. The latter can be tough because you can wind up slinging past an enemy with one, but doing so and then smacking right into a corner won’t do you much good. 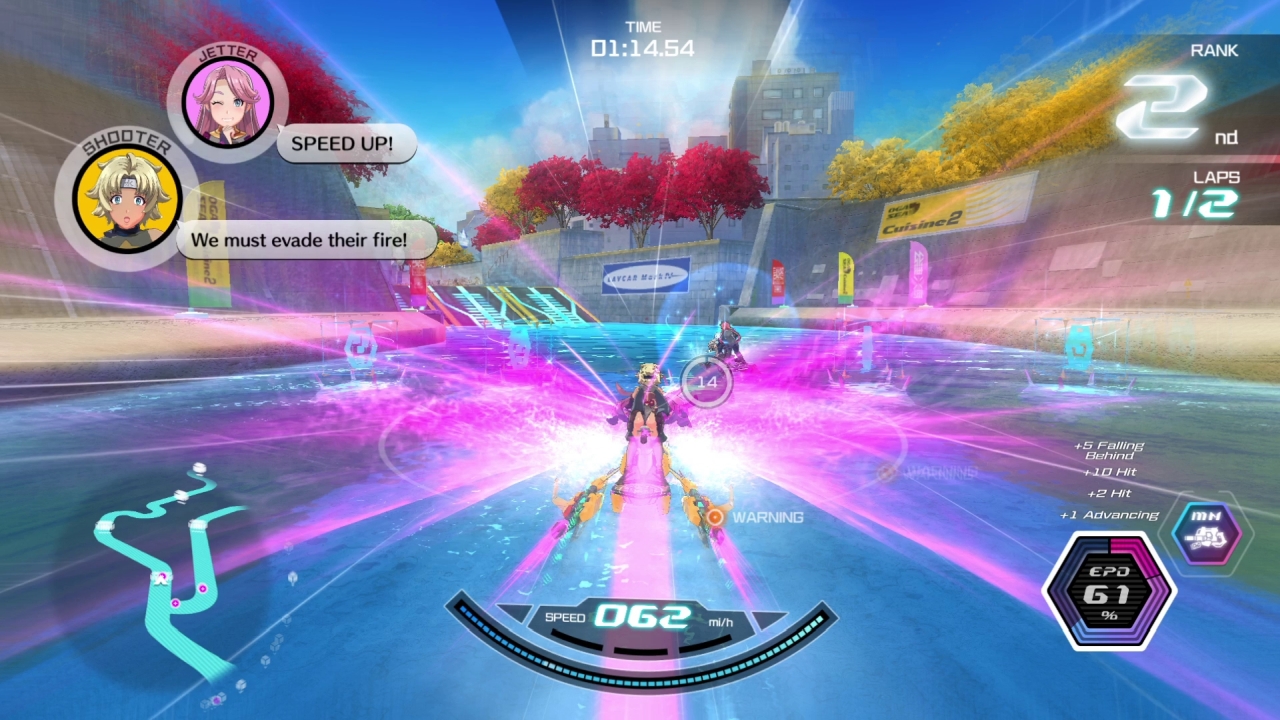 Victory is a balancing act that requires using pure racing skill more than anything else, because while things like upgraded firepower will help you in the short term, they won’t always be available. Your regular guns have a cooldown to them and while you can spam them, doing so will mean that you won’t be able to pop the balloons that litter the track and slow you down. Going through them is a risk because you might get a power-up or some coins to buy new outfits and other cosmetics, but you could lose a place due to them too. You have to weigh being able to use the guns on them and hope enemies don’t show up with maybe letting your rivals get a minor lead and try to catch up — which can be a smart strategy if you’re overtaken in the early going.

The core racing action is surprisingly good. Even without relying on things like kart racing tropes, playing time trials reveals a lot of depth to the track design that isn’t readily apparent when you’re just playing to finish a race and move on in the story. There are shortcuts, alternate routes and little tricks to shave seconds off by properly timing jumps in conjunction with a boost to go through hoops and boost a bit off that. You can also experiment with some of these elements in races, but it’s easier to do so after the fact and then go back and try the races again with all the knowledge you’ve gained. Doing so allowed me to go from wanting to just progress the story to challenging myself to complete all of a stage’s objectives — at least to some degree. 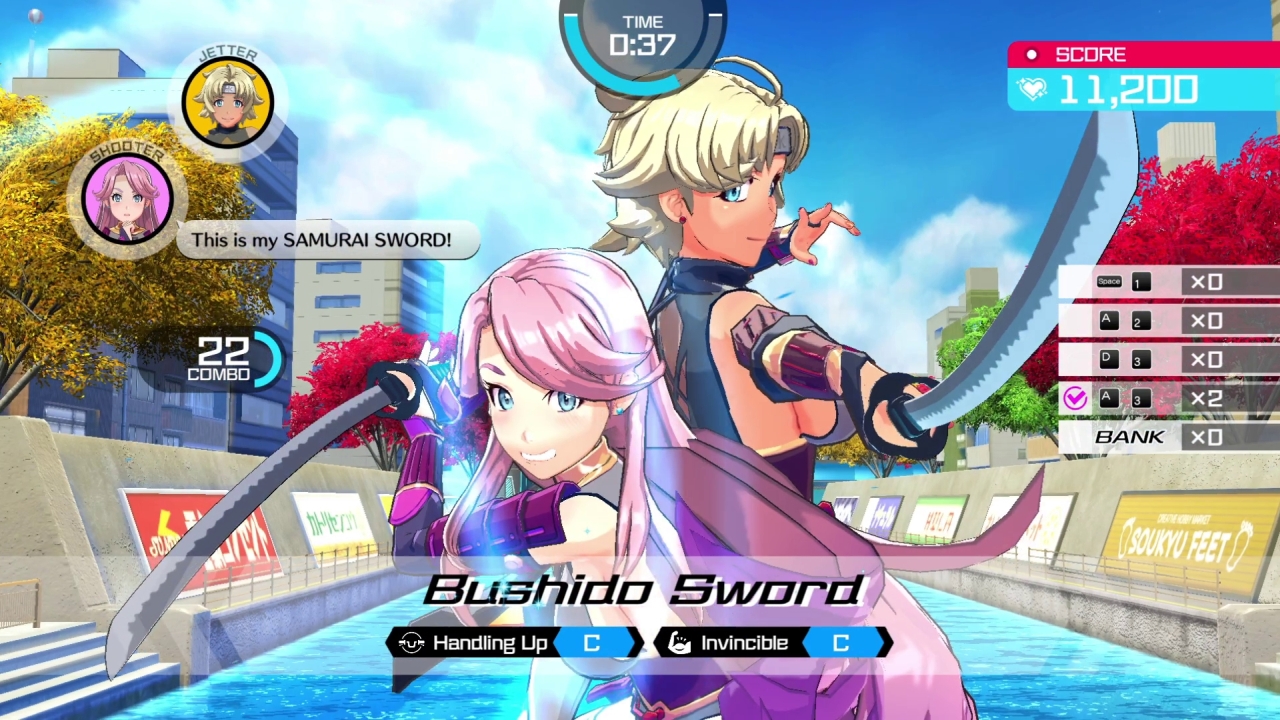 Visually, Kandagawa Jet Girls looks above average overall with a few visual flourishes that are worth noting. The cel-shaded character designs work out well, while the more realistic-looking environments show off things like impressive lighting effects for neon-lit nights and sunny days. There’s a decent amount of variety of locales as well, and having camera shifts for different kinds of weapon attacks winds up working out far better than expected — with a Burnout-esque real-time switch back to what you’re doing to prevent losing track of where you are in relation to the track and your enemies. The anime’s soundtrack is put to good use here, resulting in a lot of action-packed songs to make the racing more intense, while somber and more relaxed fare is saved for the visual novel portions.

The Japanese voice acting is retained whether you’re playing in Japanese or English, but the subtitle work is fantastic. The text is nice and large, easy to read and the voice cast’s tone fits the characters nicely — so the ice queen Misa wounds vulnerable and shaky at times, but in ways that fit her wanting to defrost a bit while Rin’s enthusiasm for everything makes you understand why Misa would be justified in her annoyance. 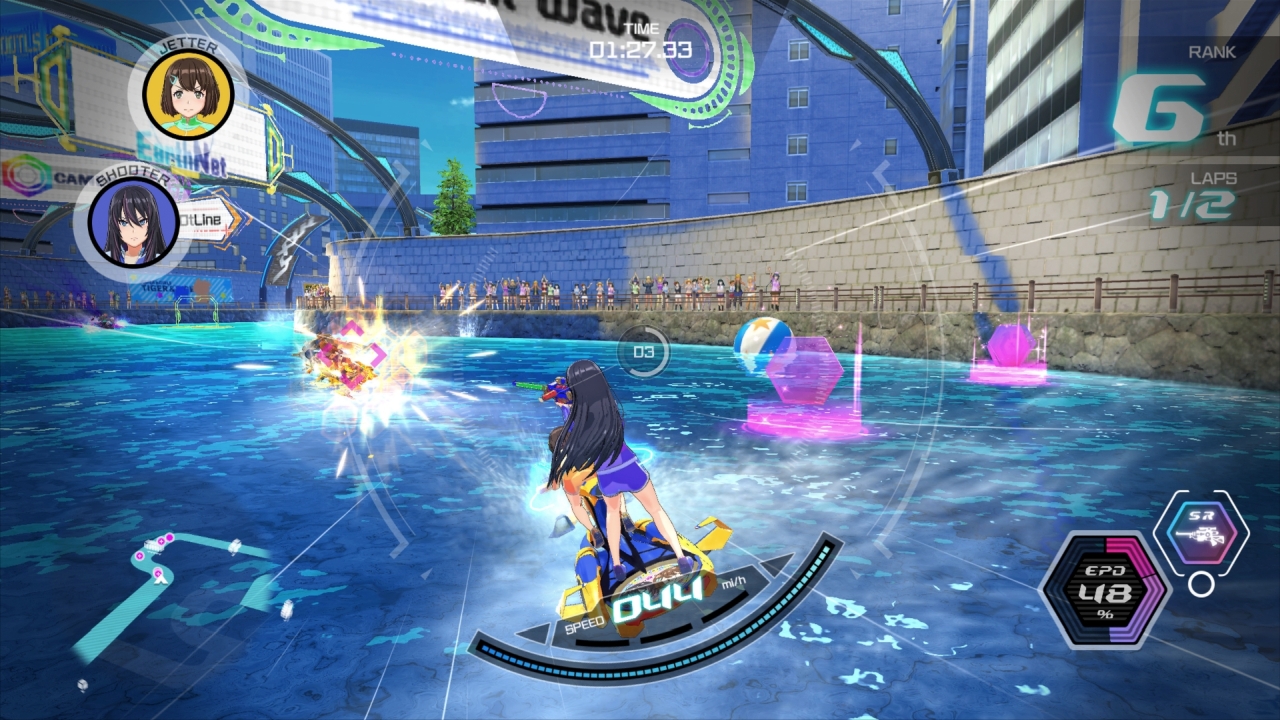 Kandagawa Jet Girls has some rough edges to its presentation, but the core racing action is far better than expected. Many anime-based games wind up getting old quickly due to a limited concept, but by going with a time-tested genre and mixing gunplay in with racing, power-ups and tricks, you wind up with something that’s a lot of fun to play. Fans of the anime will find that it pays homage to it nicely, while even non-fans can give it a go and have a lot of fun — especially since there aren’t many water-based racing games out there and none with combat like this one has. The blend of visual novel and racing helps keep the races feel special, while the multi-layered track design adds a surprising amount of replay value. The graphics aren’t top-shelf, but get the job done, while the voice work and soundtrack are solid and nicely fit the characters and the action.