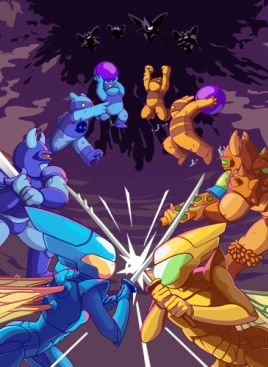 Having previously checked out BumbleBear and Liquid Bit’s home port of the cult arcade hit Killer Queen Black at various events earlier and loving it then, I could not wait to try out the full version. Maybe it was just that I had finally felt excitement over a popular arcade game hitting consoles again, a feeling that has become a relic from my childhood in the early ’90s. We’ve had several indie games so far that emulate classic arcade games, but not one that is itself a modern arcade classic. So I started things up and immediately began having fun. Indeed, it truly felt like a modern take on the likes of Joust, but with even more depth.

In a colorful single-screen arena, two teams of bees battle it out for control of the hive. One player controls the team’s Queen, the others control Workers/potential Soldiers. Each team aims for one of three win conditions and things quickly get nicely chaotic. The action is fun and fast-paced, requiring each player to properly play their part and pay close attention in order to secure victory, managing several different areas in offense and defense in quick, best-of-three matches, all with some solid platforming and flying controls. It’s just as fun as I remembered it as an adult, it delivered the same kind of arcade thrills I remember as a kid, so the end result was one of this year’s finest retro experiences.

Alas, I have run into the same problem with Killer Queen Black that I did with Heave Ho. Not the problem with finding additional players, mind you. Thankfully, proper time periods were set up for the best matches. No, instead I refer to the fact that again, the core gameplay here is so perfectly simple, elegant and easy to get into that elaboration really isn’t needed and thus my preview from earlier this year arguably already covers everything. Possibly even moreso, since with Heave Ho, I at least had more levels to check out and a few flaws to note. Here, though, I had already played through every map during that previous hands-on experience with the game, so now I’m at a loss for words, as I would just be repeating that praise. 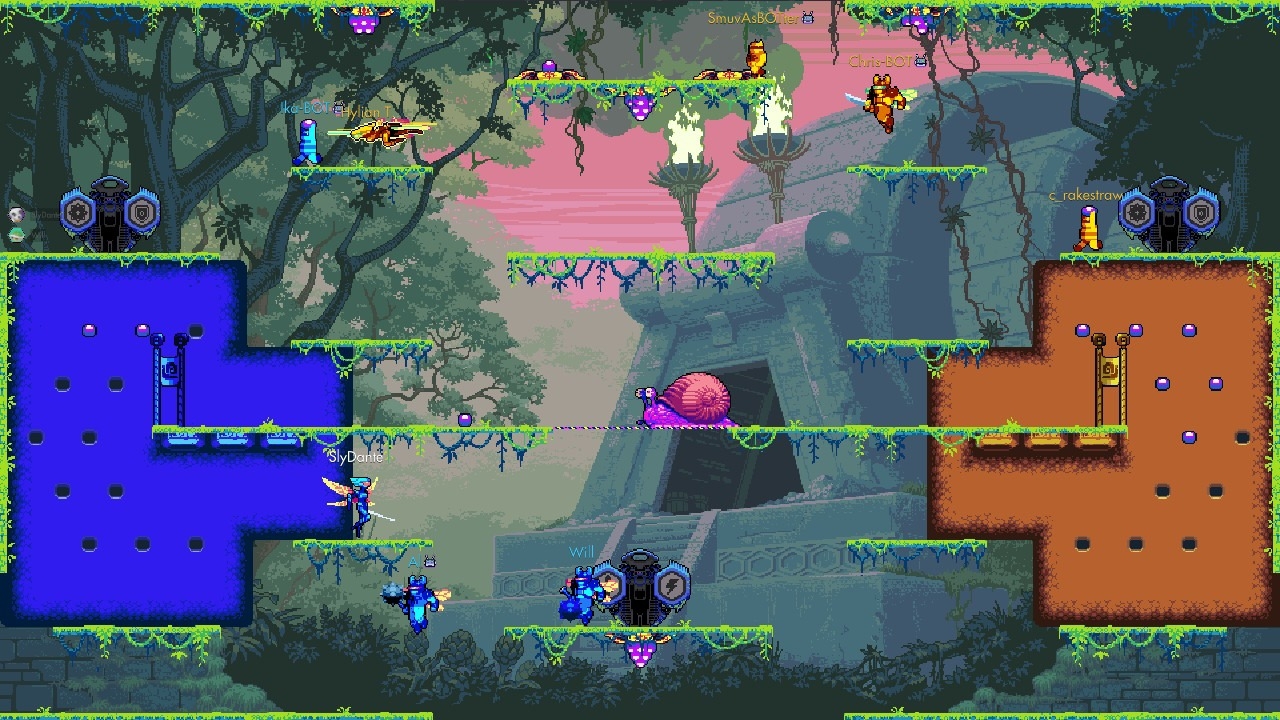 Actually, the fact that I went through every map in about half an hour or so should pretty much tell you what the only real flaw with the game is. Namely, that it’s kind of a bare-bones experience at the moment. There are only six battlefields available right now, with three victory methods and three different costumes for the workers. More maps and character skins are to be added in the coming months, but it feels odd to release a game without them. In fact, the feature that actually helps provide Killer Queen Black’s name, the Black Team who gets all of their matches streamed online and that any team can become via defeating them, isn’t active as of the time that I write this. Again, it is quite the odd omission, to say the least.

There are a few additional things worth mentioning that add nice touches to the game. First off, in a move that I will gladly congratulate any multiplayer-focused game for these days in a world where couch co-op is emphasized more and more, Killer Queen Black made the wise choice to actually include custom matches that allow you to add bots. So yes, even if you can’t find anyone else, you can indeed have yourself a few solo matches. It is, of course, not completely as rewarding as playing against human beings, but it works perfectly fine. And as seen in the screenshots here, bots are also there to fill out any online sessions if players are needed as well, ensuring you don’t have to spend large amounts of time waiting for a full team of eight to be online. Players who even drop out or get disconnected are immediately replaced by bots for the time, making sure the action doesn’t get interrupted. 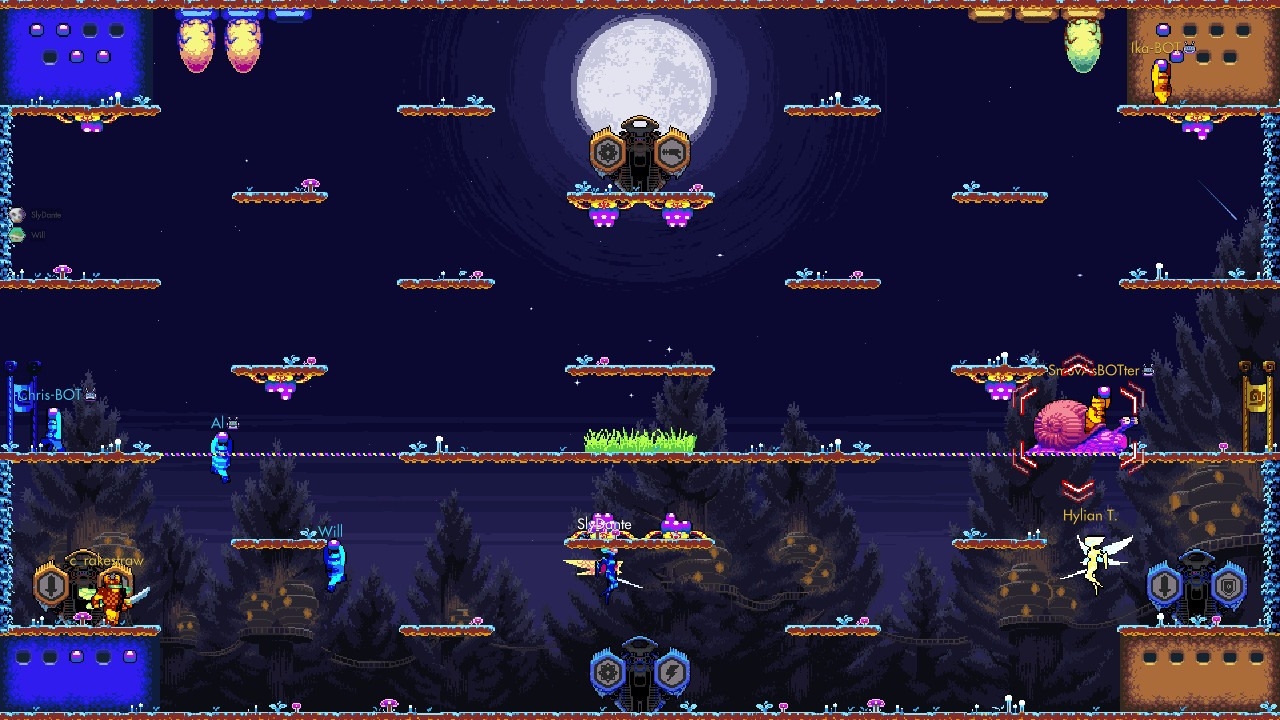 Also, I noticed that there’s a good amount of strategy in-game concerning the balance between Soldiers and Workers. Each team starts off with three Workers, and when a Queen marks one of the gates lying around the area with their team color, one of the Workers can grab a berry, enter and upgrade to become a powerful Soldier with one of four weapons to wield (at least until they die and come back as a worker). And as mentioned earlier, there are three win conditions: either kill the opposing queen three times, jump on a snail in the middle of the battlefield and ride it to your team’s finish line or collect enough berries and bring them back to your home base.

Now, it may be tempting to immediately have all of your team’s Workers become Soldiers ASAP, but the catch is that while Workers can kill Queens and other opposing team members, they also can’t collect berries or ride the snail. Meaning they can only go for one out of the three victory conditions, or prevent the other team from reaching theirs. As such, success relies upon players being able to properly coordinate a proper mix of Soldiers and Workers. And while I wasn’t using voice chat, the game also allows players to rig certain buttons to serve as alerts, immediately encircling other areas on the field for your team to target. Again, a particularly nice touch.

So yes, there’s a notable level of strategy required for what may just appear to be a simple arcade game. Between that and the quick matches, it’s easy to get addicted, easily spending a good hour or so at a time on several matches. The backgrounds are also still as detailed and vivid as they were before, Powerglove’s metal tunes still make for a killer soundtrack and the character sprites have some nice animations. Despite what appears to be a lack of content at launch, it is still a truly refined arcade experience in practically every way imaginable, especially with friends. 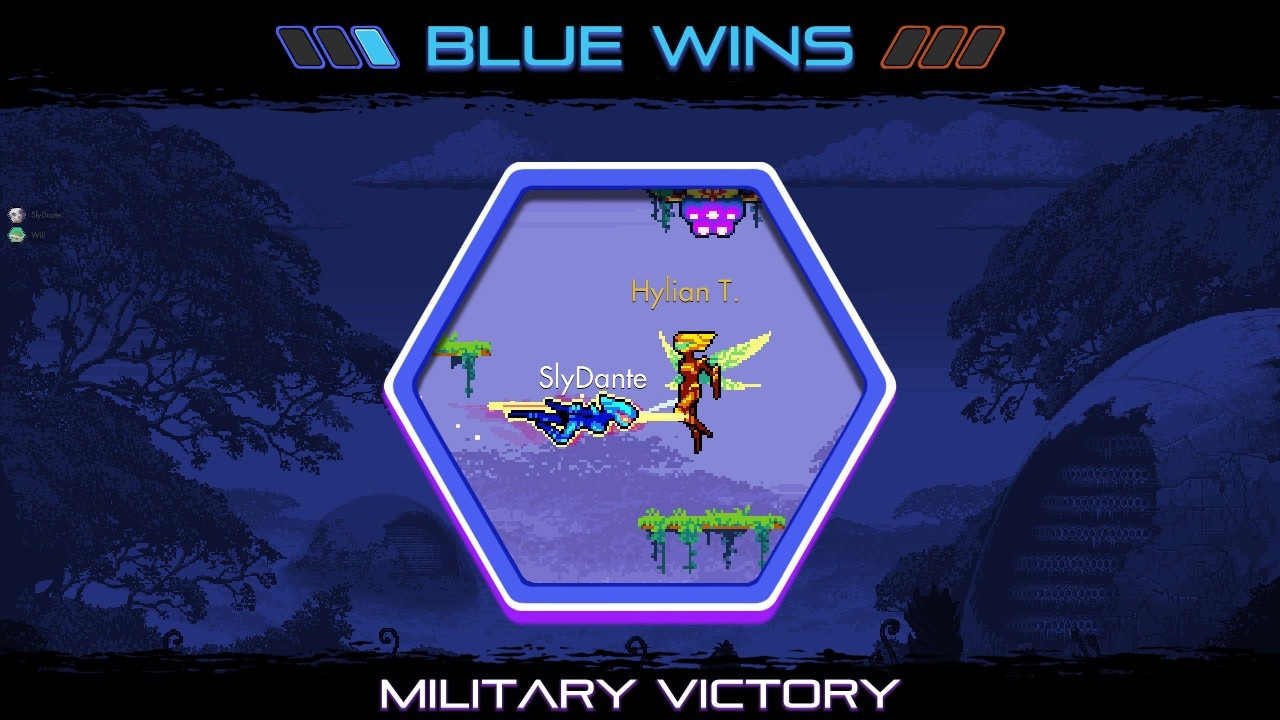 It would be easy to say that you should just wait until later to pick up Killer Queen Black once more content has poured in, but no, you should check it out as soon as you can. The action is still quick and intense while requiring a healthy dose of strategy, it’s visually stunning and it’s another stellar example of “easy to learn, hard to master.” Top it all off with the insane amount of fun that can be had while playing with friends and Killer Queen Black a no-brainer. Much like the NBA Jams and Mortal Kombat IIs of the ’90s, what we have here is an impressive home version of an arcade hit that can easily keep you tied up for a while.