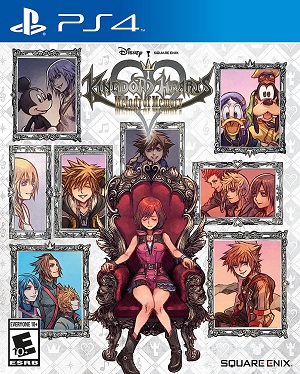 Kingdom Hearts: Melody of Memory picks up after the events of Kingdom Hearts III. Sora is missing and his friends are frantically trying to find him. Playing her part, Kairi enters a deep sleep to enter a dream world made up of memories from the past games. It’s her and Ansem the Wise’s hope that a deep dive into memories can unlock secrets to Sora’s whereabouts.

Kingdom Hearts III and its DLC, Re Mind, left players with lots of questions regarding the franchise’s future. Unfortunately, Melody of Memory does little to answer them. In fact, there’s hardly any story at all. The majority of the plot retreads old ground, covering every game from Kingdom Hearts through Kingdom Hearts III. It isn’t until the end of the game that any new exposition is delivered. If you came here for the story, you’re going to have to wait a long time to get anything new. 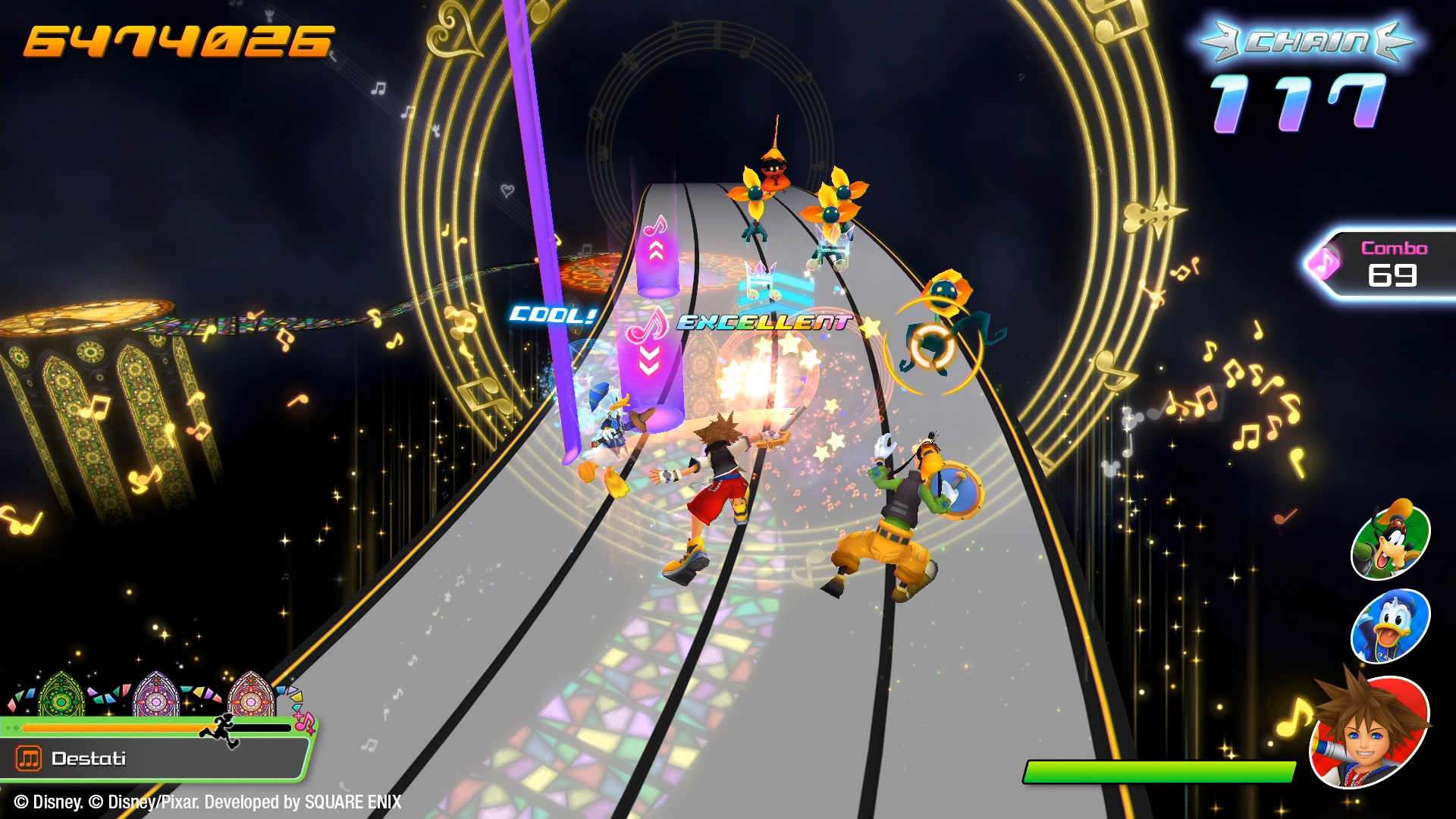 Probably more disappointing is Kairi’s role. Despite being marketed as her game, Kairi is notably absent from Melody of Memory. Asides from a bit of narration here and there, Kairi doesn’t appear in any capacity as a playable character, nor does she get any moment to shine. Much like previous games, Kairi gets nothing to do, which is a huge shame considering this was supposed to be her game.

Lasting anywhere from 8-12 hours depending on the selected difficulty, World Tour tasks players with completing songs in each world, with every world containing 1-2 songs. In total, there are three different styles of missions in the game. Field Battles are your standard missions, tasking players with following the rhythm as they careen through the worlds. Memory Dives have players soaring through music video sequences usually set to the tune of full songs, like Simple and Clean. Finally, Boss Battles are rhythmic battles against the franchise’s most infamous bad guys. Each style is well done, though there aren’t many Boss Battles, which is a shame because they’re fun. 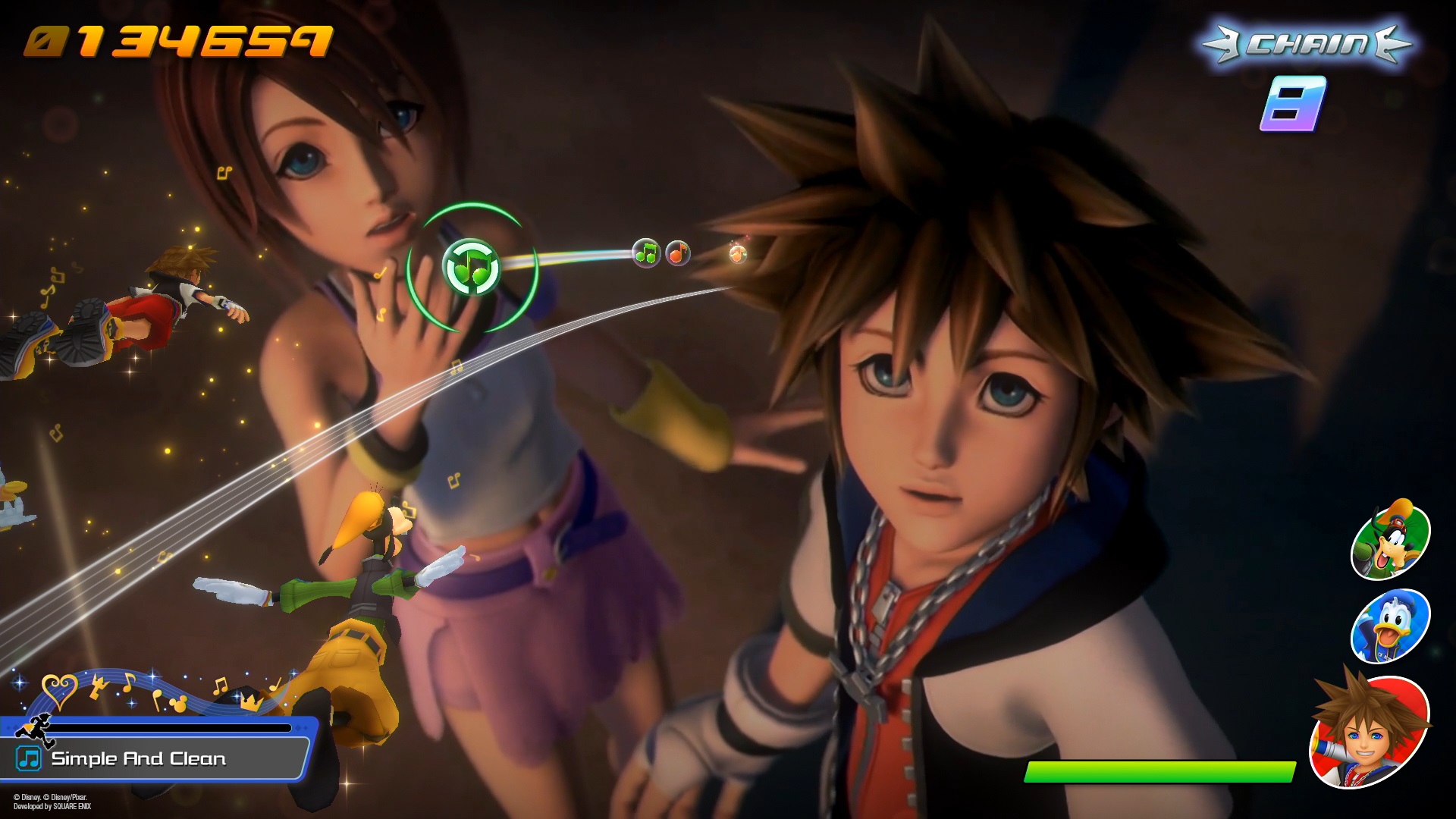 Outside of World Tour, there are options to replay select tracks, co-op and multiplayer. In Double Play, players compete locally (only on Switch), online or against computers to get the highest score. It’s a quirky mode worth trying, but it won’t keep you hooked that long. A free-for-all battle royale mode does exist, but it’s unfortunately exclusive to the Switch version. Indiezero’s work on Theatrhythm Final Fantasy managed to turn a turn-based RPG into an addictive rhythm-based game. Somehow, they’ve managed to do the same thing with Kingdom Hearts’ action-RPG gameplay. It sounds simple on paper as you press buttons to the rhythm to earn score. Every hit note results in an attack and every miss a hit against you. Simple, yes, but indieszero has managed to create a system that works well with the property.

The action takes place across a stage with your three-person party. As enemies get closer, a circle begins shrinking in on the series’ targeting reticle, and once it’s close enough to the reticle, you hit the attack button like in the main games. Command Icons and gliding are similarly tied to the same controls as they would be in a traditional Kingdom Hearts title. It all comes together in way that makes each stage look like a typical Kingdom Hearts battle. It’s impressive how smooth and fluid the system is, evoking the best parts of the series while getting players to follow the rhythm.

Three-person parties are the de facto, but players can’t choose who is in what party. Four different party compositions unlock as you progress through the story and can be swapped to at any time. You have your usual mainstays like Sora, Donald, Goofy, Roxas, Xion, Axel, Aqua, Terra, Ventus and Riku. Sadly, as mentioned above, no Kairi. In specific worlds, players are joined by a Guest character, who brings their own sounds to the mix. Then there’s King Mickey, who can be summoned with the King’s Call item to heal and boost your earned points. Despite all the different characters and guests available, who you play as doesn’t change much outside of how attacks look. 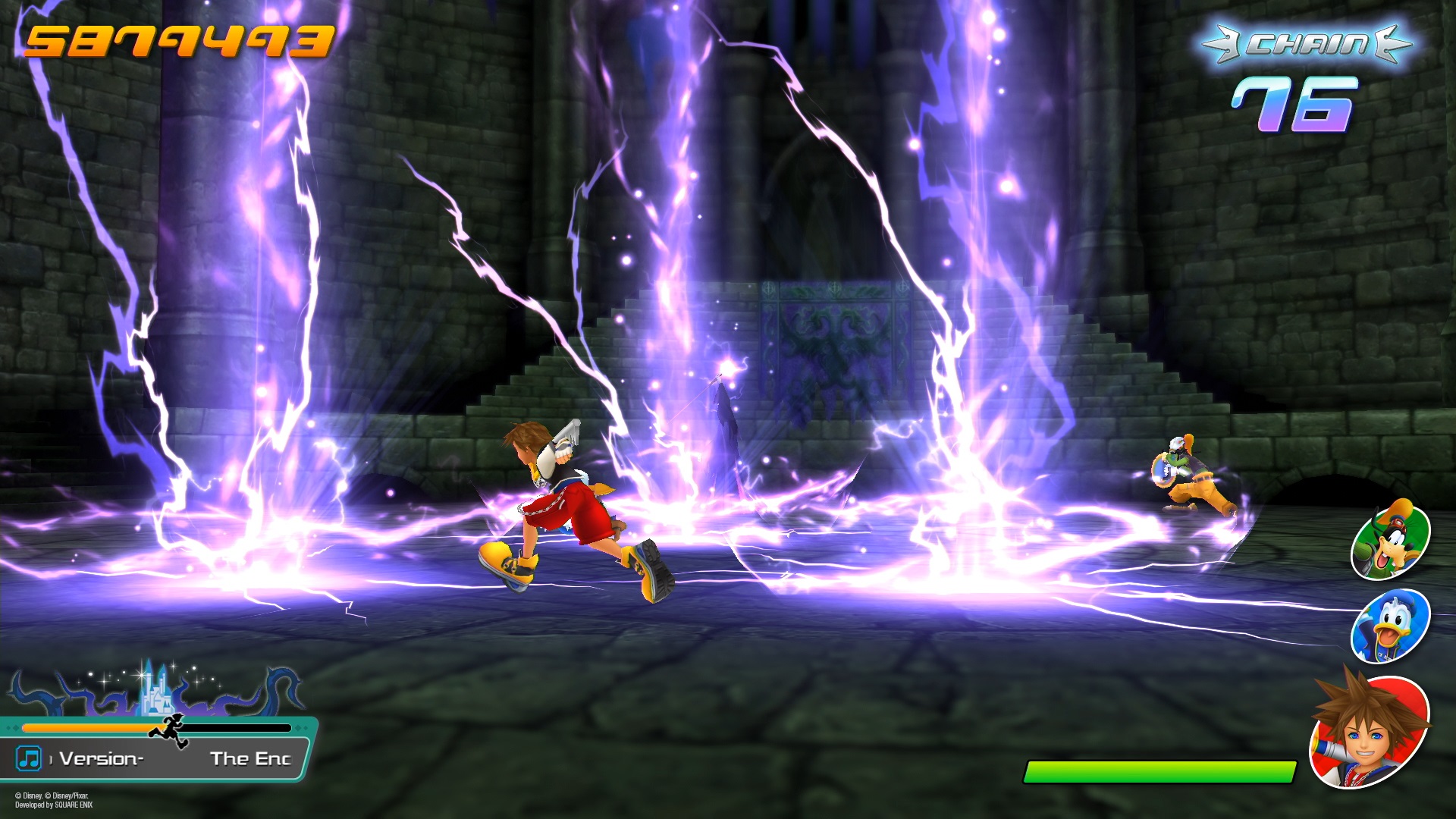 Kingdom Hearts: Melody of Memory does feature a generous difficulty system. All songs can be played in Beginner, Standard and Proud, and most of the objectives can be completed on any difficulty. Considering many players may want to rush towards the end for the new story content, being able to run through on Beginner is nice. The real fun and complexity of Melody of Memory’s combat system, however, lies in the more challenging modes. It’s a fun system, but it’s just too bad players might skip it to get to the story at the end.

As a pure nostalgic trip, Kingdom Hearts: Melody of Memory’s presentation hits the spot. Developed in Unity rather than Unreal 4, the game follows the same cartoonish art style of previous games rather than the CG-like art style of Kingdom Hearts III. The game overall looks good enough, though it isn’t that ambitious with its graphics. What’s disappointing is how the game handles Kingdom Hearts III’s worlds, opting to use Memory Dives rather than actual Field Battles. The different art styles between the games are undoubtedly the culprit, but it doesn’t make the situation any less disappointing.

The visuals are alright, but it’s the music that’s most important, and Kingdom Hearts: Melody of Memory no doubt knocks it out of the park. Yoko’s entire library is here to play and listen through. The amount of feelings Yoko can convey through her music is astounding and never has it been so easy to listen to it all. If you listen carefully, you may even hear some new tunes. While the visual presentation isn’t that grand, the audio is simply fantastic. 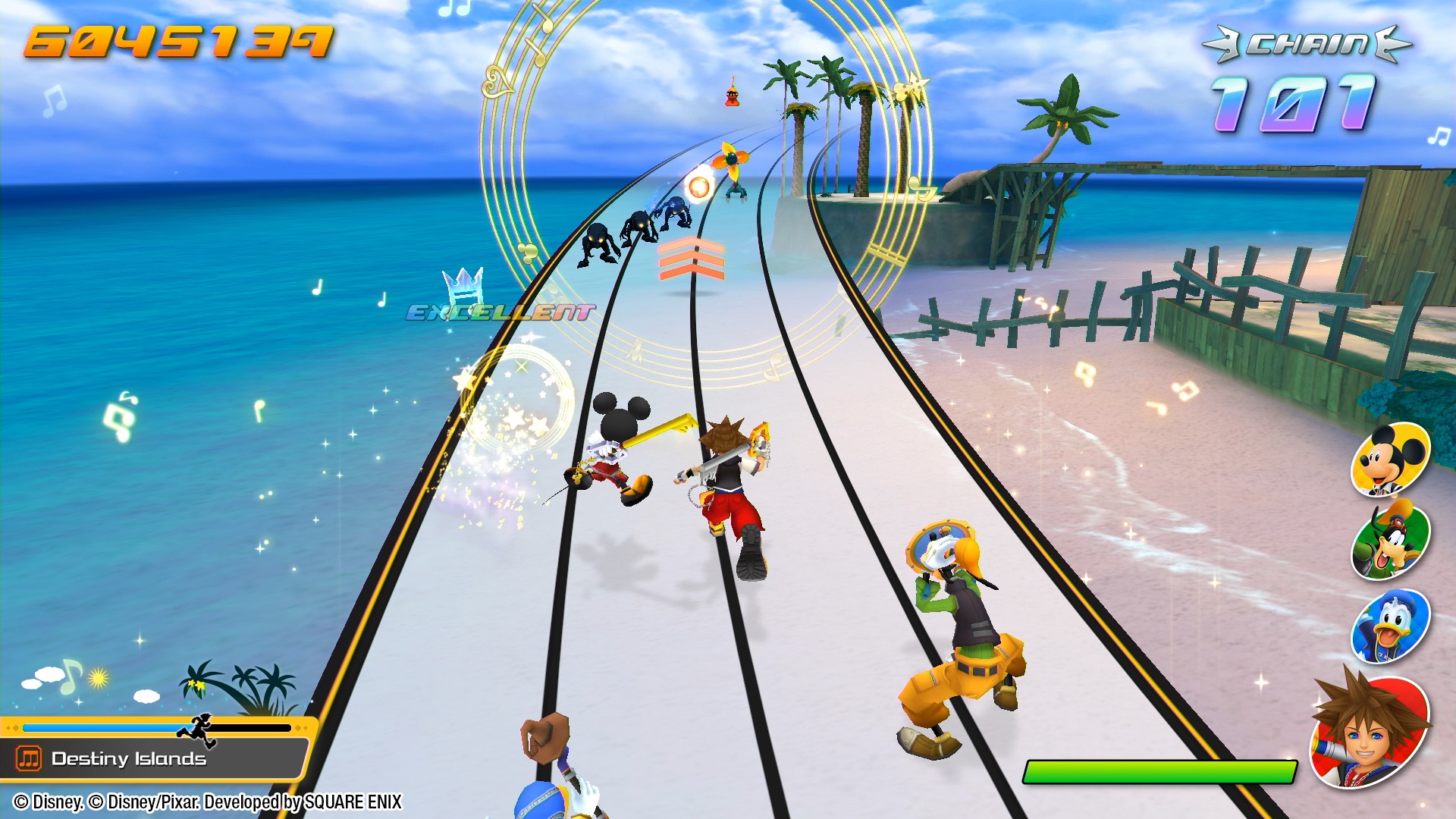