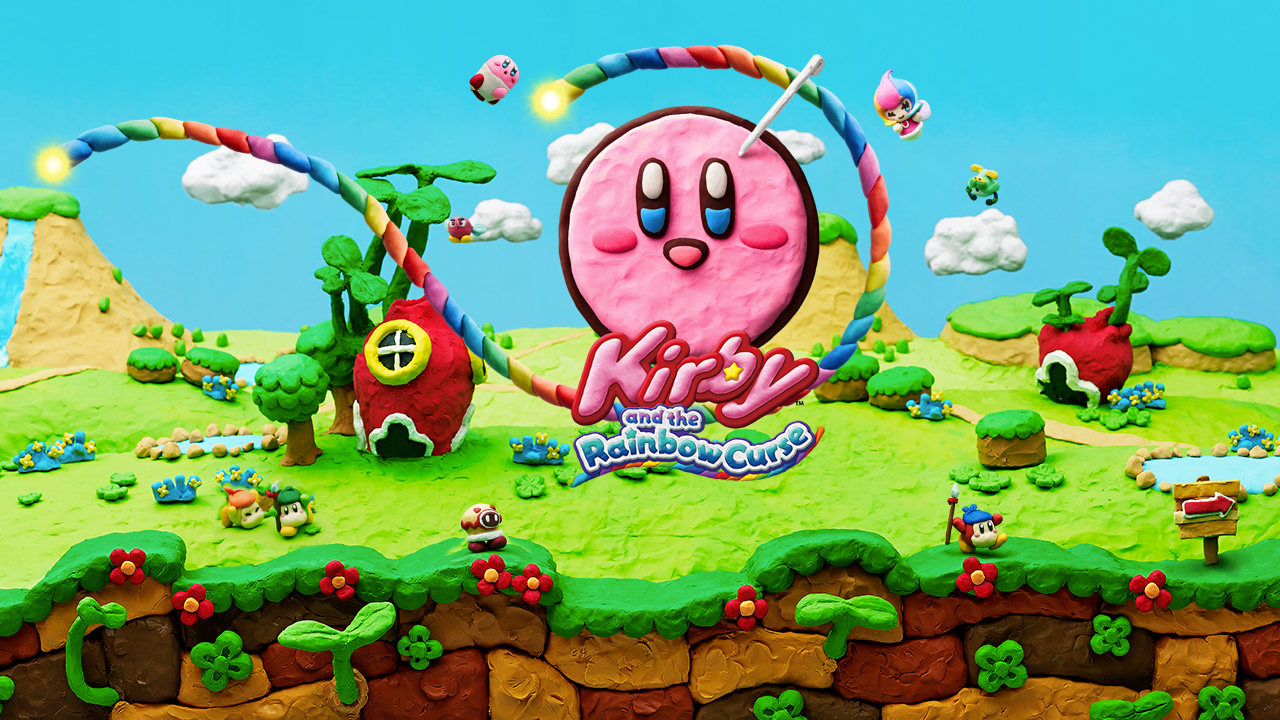 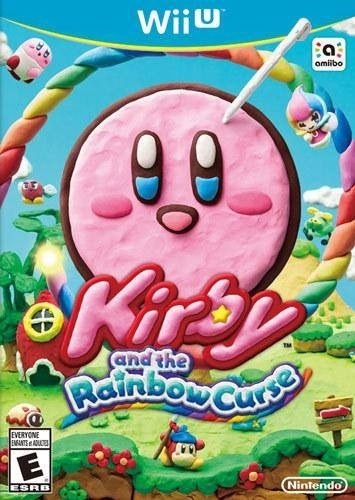 Kirby and the Rainbow Curse

Kirby and the Rainbow Curse is a special game. It marries staggeringly beautiful visuals with a unique approach to traditional platforming, and is almost guaranteed to charm its way into the heart of anyone who gives it a try. HAL Laboratory likes to experiment with new concepts for its pink hero, but Rainbow Curse might just be the best adventure Kirby has been on for quite some time.

Unlike most Kirby games, Rainbow Curse isn’t about sucking up enemies and using awesome powers. Instead, Kirby is controlled entirely with the stylus, tapping the pink hero to roll or perform a spin attack and drawing rainbow ropes to guide him through the dangers of each stage. Those who played the fantastic DS title Kirby and the Canvas Curse will feel instantly familiar with Rainbow Curse’s stylus-driven approach, but the unique control mechanic feels better than ever on the Wii U gamepad.

Rainbow curse differs from most platformers by giving the player a rare opportunity for creative expression. You can draw your rainbow ropes in any shape or direction you want, and I had a great time experimenting with different approaches to each platforming challenge. The controls can take some getting used to, but once you really grasp them the game becomes a fabulously graceful experience. Once I’d mastered the physics and mechanics of Kirby’s movement I found myself falling into a hypnotic rhythm, guiding Kirby through stages unharmed while reaping the rewards laid out for talented rainbow rollers.

The pink hero’s vehicular transformations are great too, and each introduces an intelligent and unique approach to the game’s established mechanics. Rainbow Curse doesn’t rely on them, though, doling them out as timely dashes of variety, instead focusing most levels on Kirby’s rolling physics. The entire design of the game just feels so novel, and despite being the second Kirby game to adopt a platform-drawing premise, Rainbow Curse feels fantastically fresh. 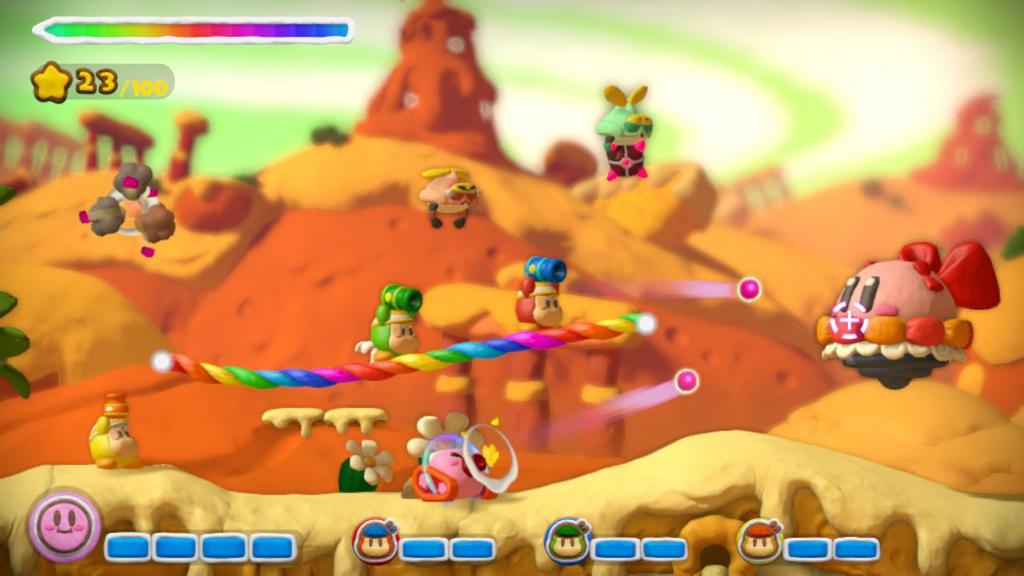 Much of that is thanks to the title’s incredible claymation visual style. It enjoys a hand-molded appearance unlike anything you’ve seen in a game before, and imbues Kirby and his world with an almost impossible level of charm. Rainbow Curse is endlessly adorable, and often feels like something pulled straight out of a child’s brain. Those visuals are also backed up by a notably excellent soundtrack, created by long-time Kirby composer Shogo Sakai. It’s playful, lighthearted, and positively infectious, and dabbles in numerous genres on its way to nestling firmly in your brain’s pleasure center. The soundtrack really ties the experience together, and along with the clay-mazing visuals elevates Kirby and the Rainbow Curse to something truly special.

Unfortunately, you won’t get much chance to enjoy those visuals in their full glory because Rainbow Curse is played entirely on the gamepad, so your eyes rarely get a moment to wander towards the television. It’s an unfortunate compromise for the game’s unique stylus-controlled gameplay, but it was a sacrifice I was ultimately willing to make, especially since everything still looked great on the smaller screen. Rainbow Curse also lets you play with up to three other friends, each controlling their own Waddle-Dee. These extra participants don’t have to worry about touch controls or gamepad screens, instead enjoying the experience on the big screen with traditional platforming controls. However, they must rely on the platforms drawn by the gamepad player to complete each level, adding an interesting element of responsibility and cooperation to the gameplay. 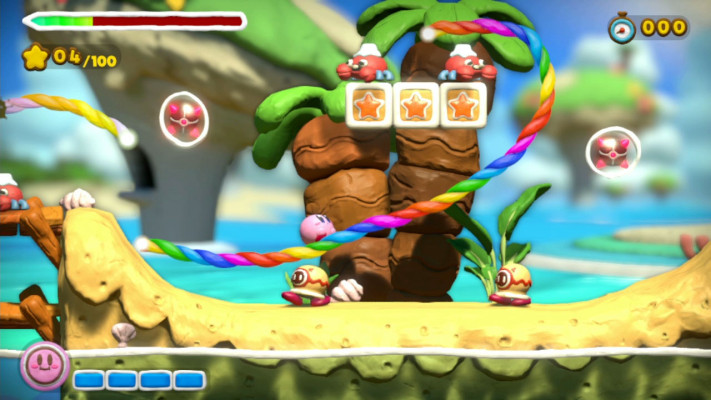 Kirby’s latest adventure boasts only 28 levels, but each one is substantially longer than your typical Kirby stage. Instead of bogging down the flow, however, that extra length allows each stage to explore a unique idea or approach to the game’s marvelously flexible mechanics, making each one surprisingly memorable. They might have overstayed their welcome on a handheld, but the extended stages feel right at home on Nintendo’s home console. I loved the anticipation of seeing what each new level had in store, and was consistently impressed by Nintendo’s creative twists on the game’s central mechanic.

Even so, it’s hard not to feel the Japanese developer could have done more with the game. I appreciate the designer’s decision to allot each level a bespoke and memorable spin on the game’s rainbow-drawing gameplay, but many of those great ideas appear once and are never seen again. However, while there’s definitely untapped potential in Rainbow Curse, there’s also lot to be said for leaving a player wanting more. Not one level in the game felt like unnecessary padding or filler, and while relatively brief it maintained an incredible sense of fun from start to finish.

Of course, the game also gives you plenty of reasons to return to each level for a second try. Apart from the stellar level design and fantastic soundtrack, each level also contains up to five treasure chests and a collectible diary entry. The loot isn’t just tacked on trinkets, either – each chest either contains a track from the game’s sublime soundtrack or an incredibly detailed clay figurine, both of which can be enjoyed in the game’s gallery. The level of craft and detail on the figurines and the childish diary entries really illustrated the immense amount of care that went into Kirby and the Rainbow Curse, and I loved poring over each one. 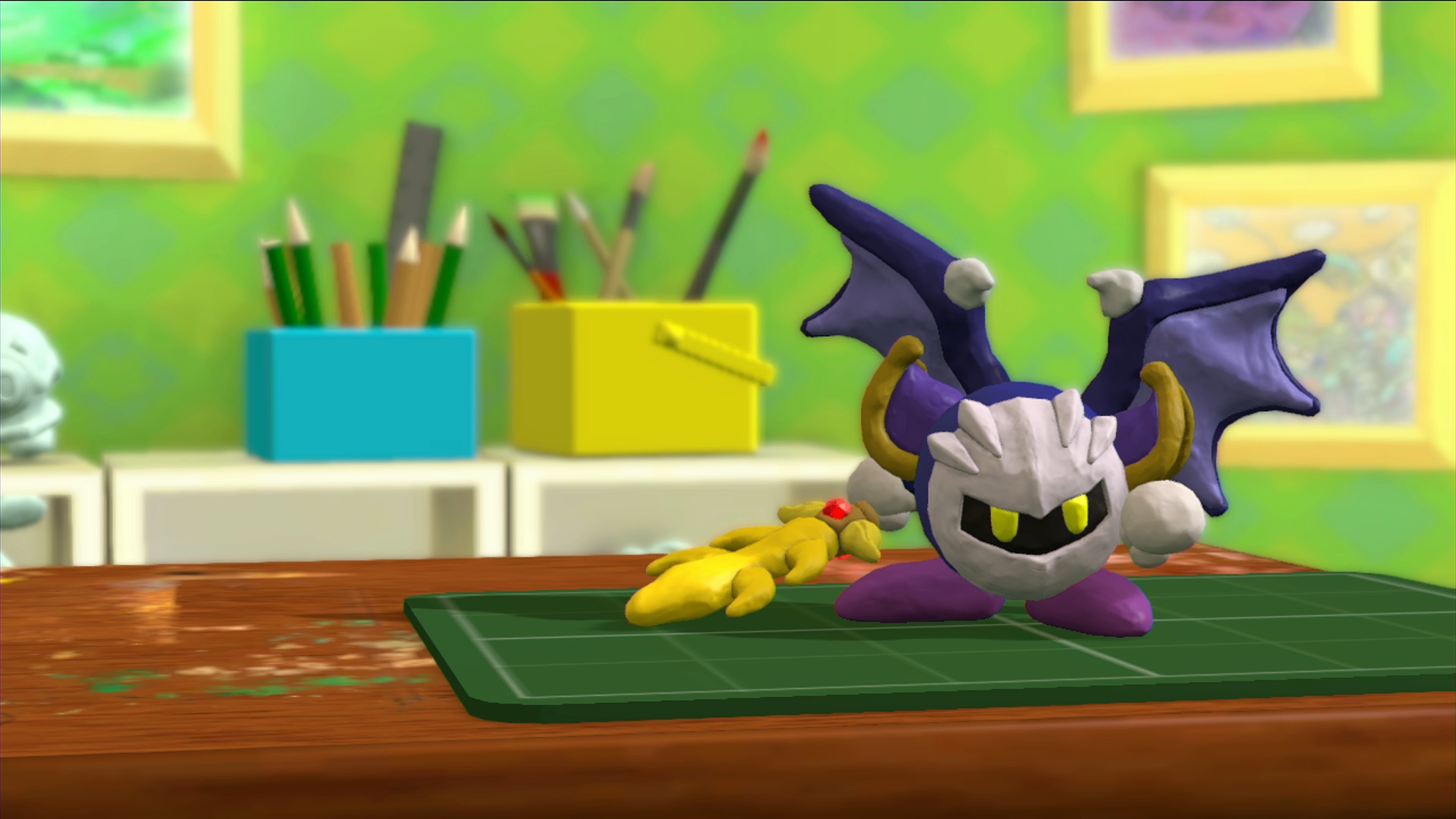 Much like Captain Toad: Treasure Tracker, Kirby and the Rainbow Curse is a constantly creative adventure that offers players something they won’t find anywhere else. Its claymation visuals are astoundingly beautiful, and while brief, Kirby’s latest adventure is never anything less than satisfying. There’s a wealth of collectibles and challenges available for players looking to extend the experience, but the sheer quality of the level design provides more than enough reason to cover the world in rainbows all over again.