Only recently have we seen the concept of “dating sims” really starting to be accepted by Western gaming culture. Even then, there’s still a huge stigma around the prospect. Most of these titles play out as visual novels, with a focus on developing your character’s stats to make them more appealing to NPCs. It’s certainly not an accurate simulation of dating which has always made the naming convention a bit odd. Kitty Powers’ Matchmaker is no visual novel, but it may be closer to an actual dating simulator than most other titles on the market. In this game you run a dating agency which pairs up strangers and puts them on dates. If the dates go well then you’re paid handsomely – if they flounder then it’s your company’s reputation on the line!

Here’s how a session of Kitty Powers’ Matchmaker typically goes. First, you invite a sad, loveless sack into your humble agency. After learning a bit about them (hobbies, astrological sign, “type”) it’s time to pull out your little black book and pair them up with a suitable person. It’s possible to take a complete gamble, but the best bet is often to go with appealing to each character’s shallowest tastes. For example, match two folks up who have a thing for each others’ hair or eye colors. Better yet, send two lovesick folks out who happen to share one hobby in common. They need to find something to like about the other or they’re almost certain to walk out during the date. Don’t fret too hard; if you stink at this whole matchmaking gig then Kitty Powers herself will lend a helping hand (or at least, hints) to whip you into shape.

Dates themselves are a smattering of minigames that you’ll need to pass to do well. These games range from memorization to luck to math. Sometimes it’s required to pick out the waiter for the evening to call them to the table. On other occasions a great big wheel pops up to gauge whether a little white lie goes unnoticed or not. The least enjoyable of minigames is when the game asks to calculate a tip. Beyond that, it’s a funny gamification of real first (and second) dates between awkward parties. Each date lasts only a few minutes, meaning you can really hammer tons out in one gameplay session. Some will dislike this repetition, as there’s no way to escape it via extraneous activities. 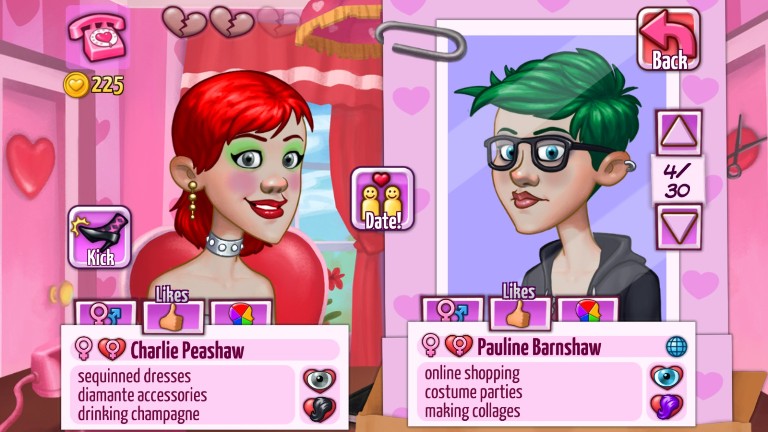 The main reason for their brevity is because Kitty Powers’ Matchmaker was initially a mobile game. As is the trend with most smartphone titles, the goal is to provide a gameplay hook to keep people coming back minutes at a time. This game certainly has that hook and thankfully is free of paid unlockable features. Instead, each positive date pays out with reputation and coins. Reputation helps increase the agency’s size and potential clientele. On the other hand, coins are used to buy new restaurants, black book pages, and salon options. Salons have the potential to make a client completely match the visual profile that someone is looking for. Again, it’s super shallow, but works within context!

So we’ve got mostly simplistic, but enjoyable gameplay parceled out in small dates. One of my favorite aspects of Kitty Powers’ Matchmaker is not inherently related to the gameplay, but to its visual design and openness to sexualities. Unlike most Western-released dating sims, there’s absolutely nothing barring gay and lesbian relationships. No matter who they love, each character is equally as lonesome and goofy as everyone else. Heck, Kitty Powers herself is quite a positive drag queen who doesn’t rely on mean-spirited insults to get her jokes across (they do have some distinctly British humor, though). The cartoony visuals, and Kitty Powers’ saucy tongue-in-cheek comments help establish the dating landscape as fun rather than horribly depressing, which is definitely a good thing. 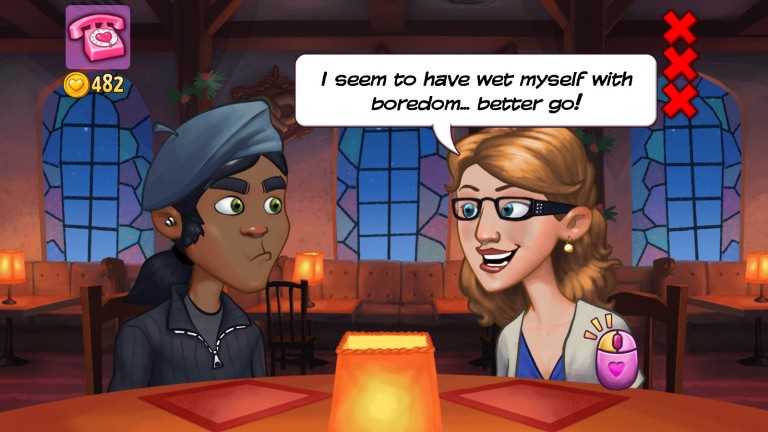 Kitty Powers’ Matchmaker falls under the umbrella of casual game, and that’s where its value inherently lies. Once you get into the rhythm of gameplay, it provides a reliable burst of digital dating with flair between more samey titles. With that said, in this instance it might be best to go mobile as long as you’re not desperate for PC play. It’s much cheaper ($2.99 versus $9.99) and the brevity of play jives best with smartphones. If you do opt for the Steam release you get extra commentary from Kitty Powers herself. In any case, Kitty Powers’ Matchmaker provides a solid casual title for those looking to play cupid.