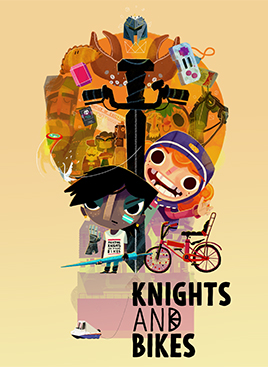 Even to those adamant on looking at things from as critical — as apathetically blunt — a perspective, there’s still that willingness to see a particular aesthetic or setting’s personal relevance. As it states in the accompanying fact sheet to his studio (of which he makes up half of its total head-count) Foam Sword’s debut project, Knights and Bikes, co-creator Rex Crowle admits to drawing plenty of inspiration from the coastal British county of Cornwall. Particularly the seaside town life-style and the way a child’s imagination can be bolstered by such a setting. How real-life struggles can be universal and that despite the innocent exterior, its central themes of family and friendship are ones even adults can relate to in some capacity. There’s plenty here across its six-chapter, optionally co-op adventures to suggest Knights and Bikes has at least done its homework and to an extent, the collage-esque visual style of felt-tip colored objects set against doodled details is charming.

For anyone who’s ever read something akin to The Very Hungry Caterpillar, Knights and Bikes is bound to evoke even a smidgen of fondness for that same textile, illustration of shape. Even if some of the brief cutscenes — and homing in on particularly zoomed-in segments — do dig up a few unwanted, low-resolution assets or moments that unfortunately work against the charm and nostalgia being crafted. For the most part, the game is predominantly built around the childish perspective protagonists Demelza and Nessa partake in on their quest for an illusive treasure on the fictional island of Penfurzy in the mid-1980s. Meaning the game can take a liberty or two on what is presented as “real” or “imaginary” in the context of its world, but it also means Knights and Bikes can revel in a case of the surreal when such things like puzzle-solving and enemy encounters (which often run the regular mill of clearing out a set number so as to proceed on) pop up. It’s disappointing that enemy encounters don’t deliver on the same odd distorting its set-up paints — the “combat” if you will, relegated to little more than mindless button-mashing as numeric values litter the screen to denote damage output.

It would be more forgiving if these were treated with less relevance, yet sadly such is the consistency and repetitive nature of these moments, and it’s hard not to consider this a major oversight on the game’s part and one that works against the player’s experience when so much time is spent locked into these many engagements. Particularly when the game finds that pivotal moment to draw you in with the tale of Penfurzy’s history or there’s that brief spark that may lead to some interesting character development. But alas, Knights and Bikes doesn’t pull this off, instead repeating the same motif of giddy exaggeration and illusion to some greater dramatics further down the line, but never fulfilling its early promise. While the general gameplay structure of these segments aren’t anything to write glowingly about — mostly revolving around figuring out which of the characters’ abilities, slowly unlocked over the course of the story, are required and how they should be best combined to progress forward — it does allow for a spot of the absurd to be sprinkled in amidst the usual ventures from one self-contained, dungeon-like region, to the next. 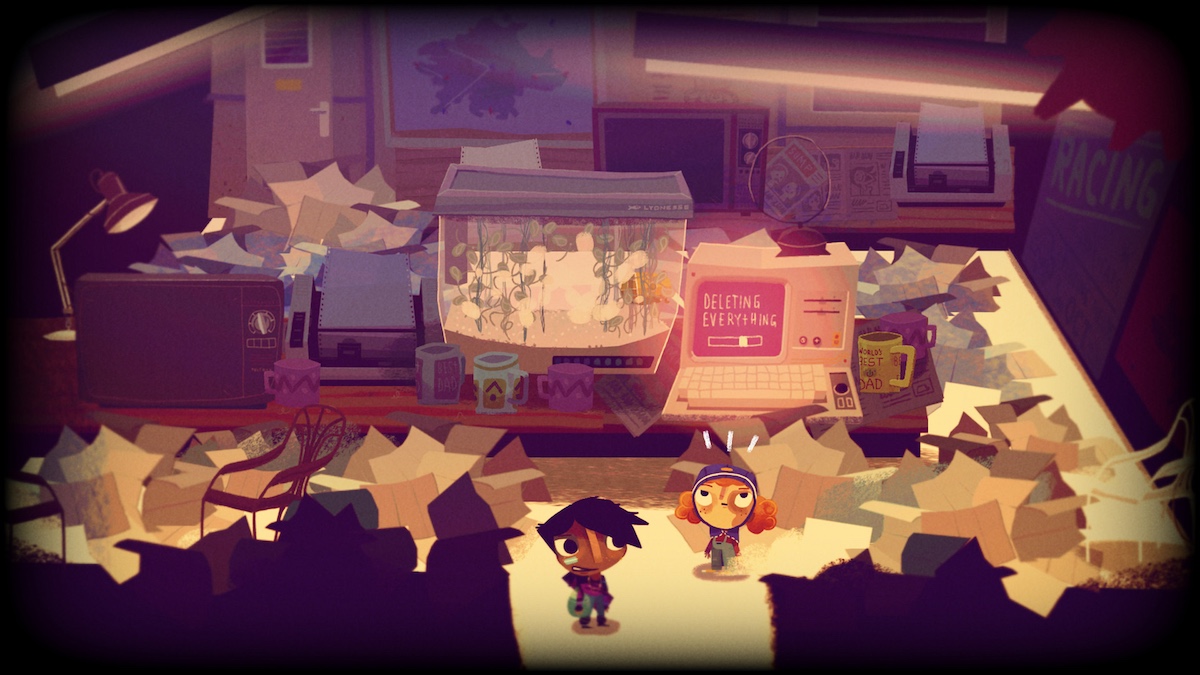 To Foam Sword’s credit, Knights and Bikes does manage to ascertain and deliver on that childish outlook on things and it’s for this reason why there remains a genuine sense of intrigue as to where the tale will eventually end. From the way “abilities” are acquired and enacted to the very scenarios with which both characters land themselves in, and imagine for themselves to supposedly land in. While the writing may not capitalize on this pleasant carving-out a tone — a few late-on revelations and moments never really delivering on their supposed impact, fizzling out with little of the emotional punch — Knights and Bikes’ playful silliness and reveling in such young naivety does have its brief, bright spots. Even if it’s something as simple as seeing both characters making stupid noises as you hold down the sprint button or the way doodle-like animations come into view during a spot of exposition. While a little too persistent, even some of the facial expressions and reactions Demelza and Nessa show is pleasant to an extent. When it sets its sights on unifying its story with its art-style, Knights and Bikes shines.

The problem then, is that the game — as previously alluded to — does little with its other components. Notably, and the biggest problem/frustration coming out of it, its gameplay and how Foam Swords attempt to hide the ambitions of their narrative behind mundane moments that, for all intents and purposes, could’ve and should’ve been cut down significantly. The very act of getting from point A to B on one’s bikes can feel a tad prolonged, while the optional “upgrading” of your character’s bikes, while purely cosmetic and never treated as an essential, even then seems to be as easily dismissed by the game itself. Even the co-op component doesn’t illicit any benefit that two human players are essential when one can so easily swap control of either character on-the-fly. Solo mode meaning that an AI controls the one not run by the player, though the odd moments where said AI finds themselves stuck on a piece of the environment — or at the very least, unable to deduce how to move/run around a particular area — even then, can throw up a few issues. 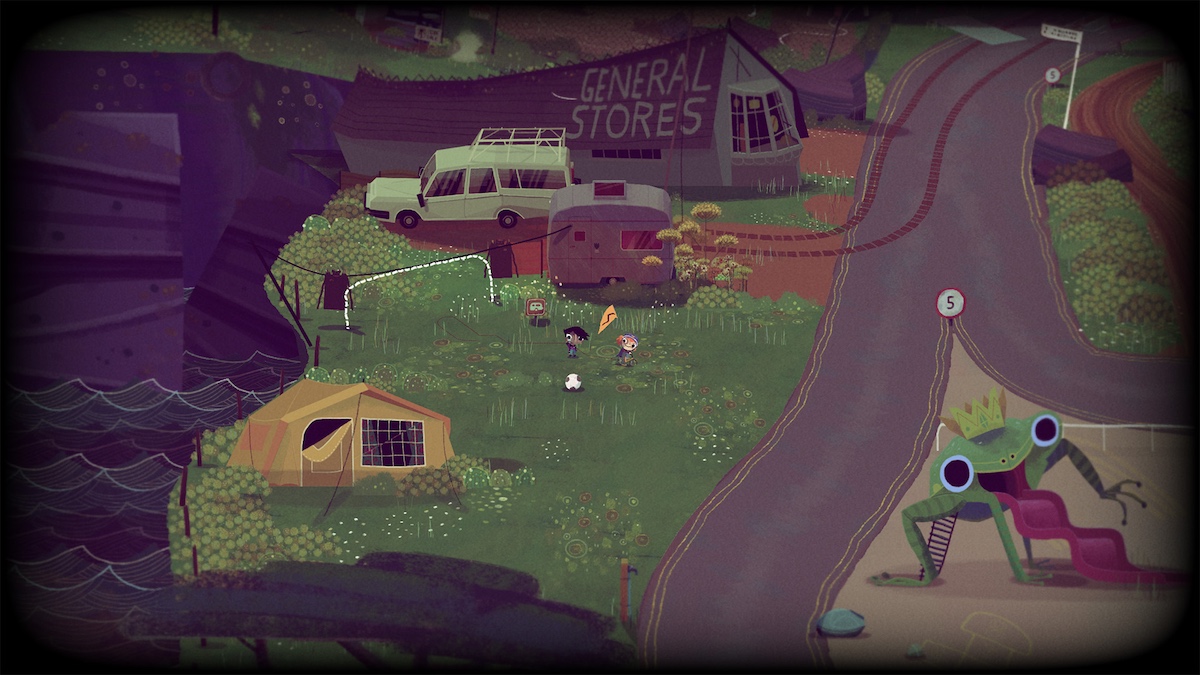 The general performance, on a technical side, doesn’t help proceedings either with the game constantly hit by some manner of frame-rate snag. One minute the game functions fine, the next it descends into a slight slideshow-like, sub-30FPS performance. The added flair of visual effects and explosions particularly during enemy encounters — and some “boss” segments — so too causing the frame-rate to take a hit. Add all these frequent irks up and unfortunately you come to the realization that, disappointingly, the game — in all its heart-warming appearance and evident understanding of how to use visuals to set a scene — doesn’t quite meet the mark it’s aiming for. Knights and Bikes knows what it wants to set up and where it wants to go, but the growing issue is that it rarely feels like it spends much time devoting itself to fleshing out our two protagonists’ relationship — either with each other or the other individuals dotted about the island. There are hints here and there, but it all comes together rather rushed and lacking any real hard-hitting conviction.

A greater frustration when such scenes are spread apart by the usual foray of clearing out rooms of, what eventually mounts to, the exact same type of enemies who can be banished by a simple mashing of the X button. Despite the game’s sincerest attempts to inject a feeling of genuine co-operation — the two characters having to “high-five” in order to recuperate one another’s health — rarely does it offer up challenge for this mechanic to be used or at least seem worthwhile. And as noted, outside of hunting down optional collectibles hidden about the islands, as well as gathering currency of a sort which you spend at the bike customization menus (though the game never explains if and when you have enough for a supposed upgrade or alteration), many of the longer-stretches come off merely to pad the run-time. It doesn’t help that the game will even force you into that dreaded slow-walking moment, or that late-on particularly, the encroaching similarities of surroundings and further enemy encounter begin to overstay their welcome and feel placed to just wall off the rest of the adventure. There are brief excursions into competitive mini-game sequences like getting to a finish line first or beating your co-op partner at similarly button-mashing 1v1s; maybe more of these moment, or simply cutting-back on the trek could have proven beneficial as even these spats between friends, or childish dialogue, are endearing to an extent. 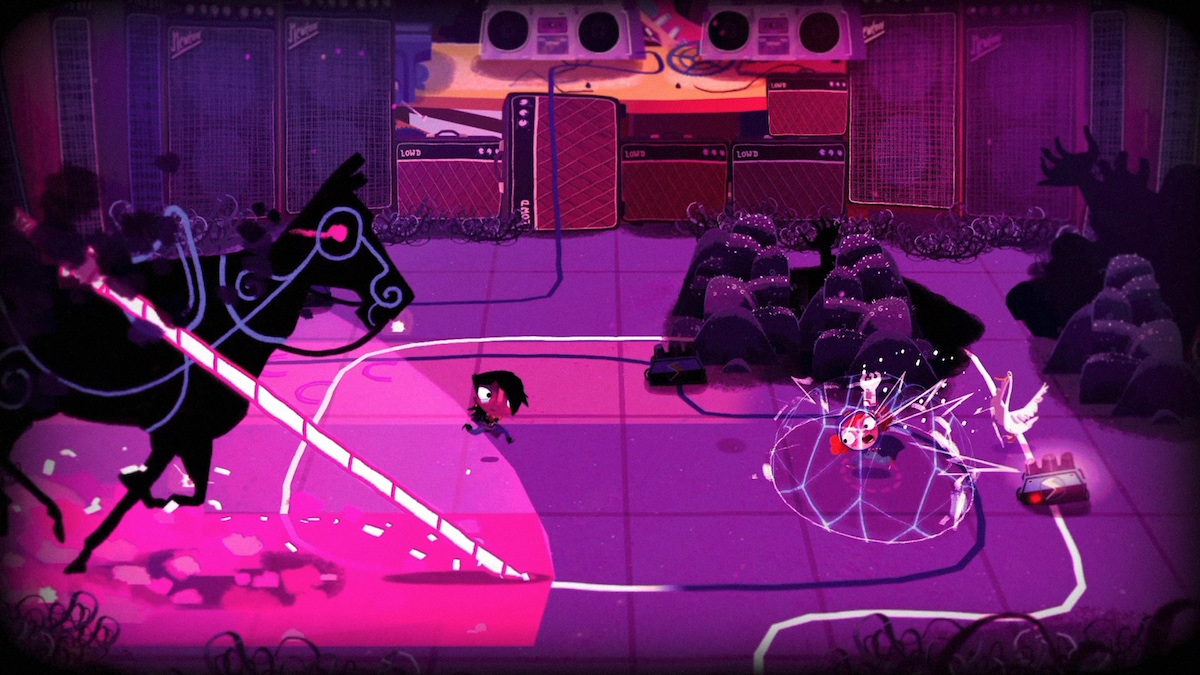 For those who are fans of this kind of colorful, semi-abstract, exaggerated style of visuals, Knights and Bikes lives up to the promise of reflecting both the silly as much the sincere side of two friends off on an adventure. Foam Sword’s use of child-like imagination and stretching the “realism” of its game world’s scenario to suit the situation is well-placed and there’s an appreciation to be had for the way their game’s aesthetic combines with their main protagonist’s wild-and-naive strive for adventure. But where Knights and Bikes meets the pass-mark for a sufficient, story-focused adventure title, it unfortunately falters with its insistence on a gameplay front that’s ultimately lacking and too often reliant on a repeated formula. If you can look past its formulaic moments of enemy-routing and the dead air that are its A-to-B travel, the tale being told in Knights and Bikes is pleasant enough and one that’s sure to raise a smile or two.