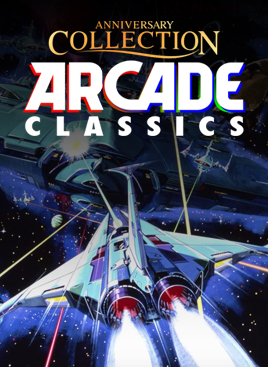 Whatever you think of Konami in 2019 (perhaps justifiably for many a reason), even the most despondent or sheer enraged of consumers — former fans of the company or not — wouldn’t deny that Konami are deserving of their place in industry history as one of the pioneers of the medium. Maybe not as high in the echelons of hardware as Atari or Nintendo, maybe even not residing atop the highest pedestal of software output that Sega and Capcom may rightly claim, but certainly up there. While it may be that bit harder to see past the abhorrent messaging and assumed abandoning of conventional AAA PC/console development (outside of the annual PES series, which shouldn’t be sneered at, or a muddled Metal Gear spin-off that still to this day makes little sense), Konami were, if you can cast your mind’s eye that far back, once in a position where seeing the mere logo alone almost certainly guaranteed quality.

Despite the changes to upper management — as much the drastically-altered philosophies and intentions as a result — a look back on the Japanese company’s early-to-mid legacy is always welcome. And with Konami reaching that pivotal 50 mark this year, the Anniversary Collection trilogy does seem like a fitting concept — a look back on Konami’s strictly pre-2000 back catalog. The first part of the trifecta, the Arcade Classics as they’re referred to, serving as eight hand-picked offerings representing the company’s earliest pre-90s arcade cabinet-focused ventures. At least, that’s the pre-release, marketed intention. In truth, Arcade Classics comes off more a hurriedly-compiled mish-mash of games while entertaining in parts, brilliant in others and incalculably wrong on the rare occasion, doesn’t seem to hold a key throughline with which the anthology holds up as its underlining intent.

A compilation that, at points, seems at odds with itself in the theme posed. Does this serve to reflect the best of the best Konami dished out in the 1980s…or is this a thinly-veiled (and half-hearted) Gradius Collection? One that, oddly enough, serves as a better suited representation of what Konami got right in more-than-modest doses. Yet just as you settle into things and you slowly-but-surely come to understand how the mighty side-scrolling, weapon-swapping genius that was the original Gradius (or Nemesis as it was dubbed outside of Japan) came to be through sheer experimentation and pure desire to try something new, the Arcade Classics hits you with that awkward whiff of corporate apathy. The sterile, almost hyper-simplified home menu, and worst of all, the bitmap compression that ruins what should be an insightful delving into behind-the-scenes concept art and early stage sketches, confined to low-resolution scans. 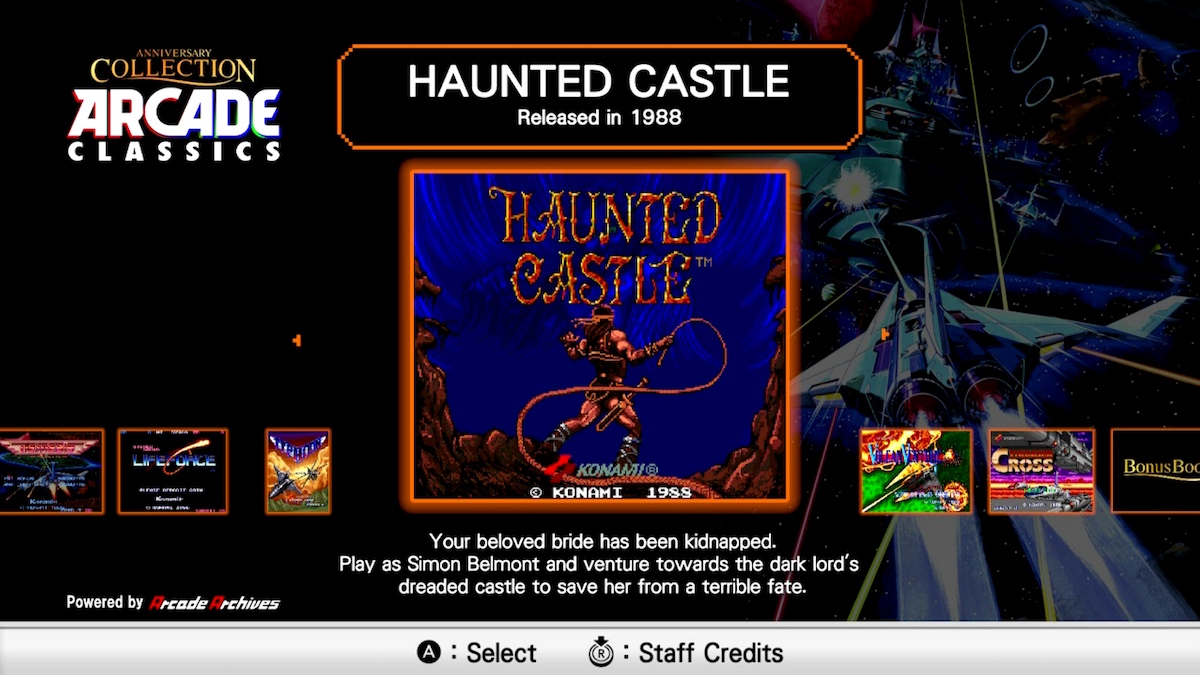 You might as well dub this the not-quite-Gradius Collection, for Arcade Classics practically serves as a retrospect as to the life-cycle of ’80s Gradius and Konami’s other ventures into the shmup genre. The progenitor that was Scramble, with its strategic emphasis on taking out foes both airborne and confined to the sloping grounds beneath — one’s fuel meter as much a critical component as staying alive. And it wouldn’t be the last you’d see of Konami’s two-weapon system either — the warranted focus on both sky and land alike — with the cutesy (if not entirely graceful in its aged controls) TwinBee. Titles that may not have posed much longevity or means for lengthy investment, but key touchstones that here grant additional context to Konami’s creative development. Touchstones that eventually feed into what is the original entrant in one of shmup’s most celebrated IPs: Gradius.

A game that to this day holds up so far as controls, soundtrack, mechanics — namely the “power up” system where weapons must be earned through accumulation of capsules, as opposed to the traditional stacking of weapons seen in many shmup titles — and thankfully, Arcade Classics‘ faithful emulation serves the three-decade old title with respectful grace. Fitting for a game that went above and beyond in introducing a new way to look at scrolling shooters. An uncanny expanding of space allowing you to weave up and down with what are essentially more vertically-open stages; previously mentioned, the weapon-switching system, rather than the typical upgrade ladder seen in many releases thereafter, giving players more to think about. A case of when to upgrade, as much how one goes about it. 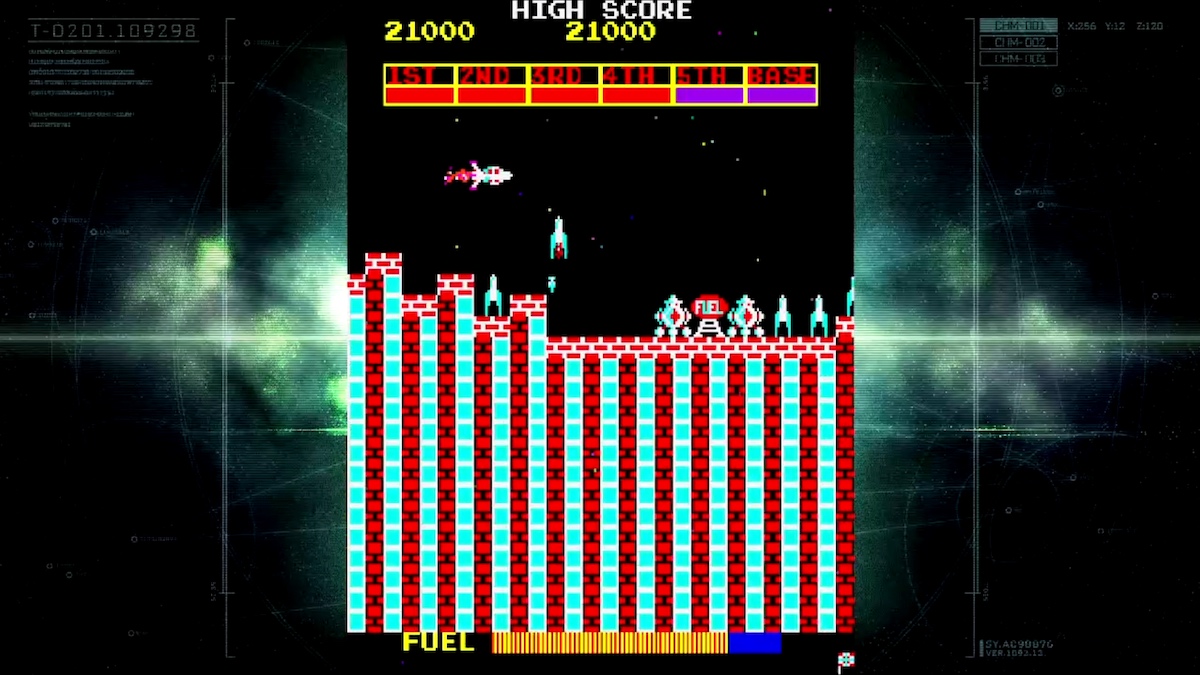 Even down to the little aesthetic touches that are its slow-downs during hectic and visually-heavy moments — be they of a horizontal or vertical persuasion — Arcade Classics does at least prevent tarnishing the look and feel of such phenomenal iterations. There’s even an option to increase the “grain” effect if the sharp, clean look isn’t your cup of tea, though the lack of support for wide-screen (outside of a horrid stretching effect for 16:9 ratio) as well as, more bafflingly, the lack of an option to play “tate” mode with the vertical-shooting titles on the Switch when rotated ninety degrees, feels like an obvious but missed opportunity. If a game like Ikaruga — a fellow great of the genre that’s been ported many a time to many different platforms — can stop to consider the novelty in this approach, surely Konami and the Arcade Classics can, right? Apparently not, and it’s this blatant bare-bones approach, much like the mandatory-like presentation greeting you on the home screen of the PlayStation Classic, that really hits home for all the wrong reasons.

If you were to casually browse the chronicling of Konami’s ventures through the early era of shmups, there’s an argument to be made that Arcade Classics proves sufficient in its offering. If you were a dedicated follower of the genre, you might be best served here, providing the brief, short-term spells of play prove less bothersome. Providing the idea of spending a mere twenty/thirty minutes at a time on the likes of Scramble or TwinBee isn’t an issue or the collection’s [chronological] closer Thunder Cross — in its streamlined simplicity and fairly anti-climactic progression to its final boss encounter — will be measured more so on its place in the timeline, rather than the quality of its stand-alone content. 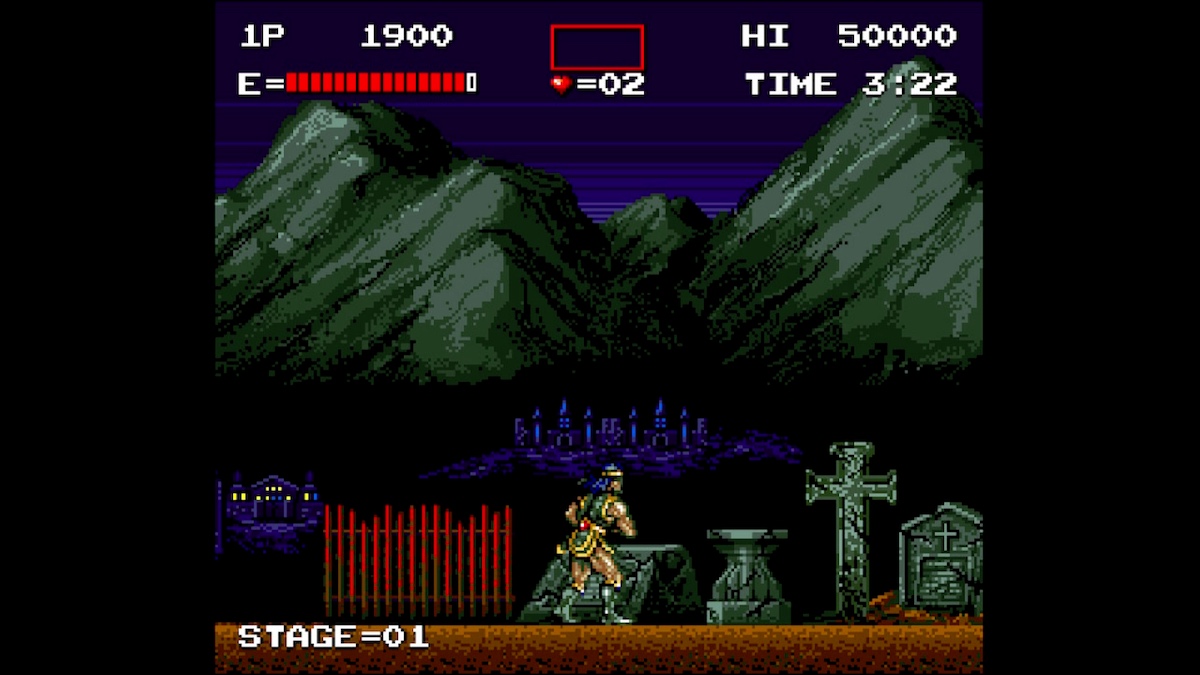 How the implementation of on-rails segments and a painstaking restriction on bullet-fire landed Ajax its moreish “one more go” addiction; how Salamander’s seamless switch between horizontal and vertical scrolling kept proceedings feeling consistent and intriguing. How Vulcan Venture — Gradius II to many people, regardless of localization — with its excellently-improved artistic design and increased liberty of movement (to so easily sway and glide in and out of many a channel, regardless of the threat looming) proved, to this day, it was a marvel in technological ingenuity and genius level design. Where the equally-monumental R-Type III was a show of sound, rhythm and subtle instruction to the player, Gradius II instead a sign that shmups could be about so much more than spamming bullets.

As enthralling and wonderful these experiences are to relive again and again — to watch as Konami so freely dabbled in experimentation, without cause for concern as to the resulting end product — there remains that air of thoughtlessness and even carelessness about truly giving the company’s arcade era as fitting a celebration it deserves. And while you could point to simply the black-sheep oddity that is Haunted Castle, the arcade remake of the original Castlevania that serves neither the series it attaches itself to, nor the collection on show here (given its stiff controls and wildly-darting difficulty curve), the fact that the games on show span many a localized variant, resulting in increased/decreased challenge and even some absent content on occasion, you can’t help but allow that more distrustful/present-day tarring of Konami’s true intentions here (at least what one may perceive to be their intentions) to creep back in. 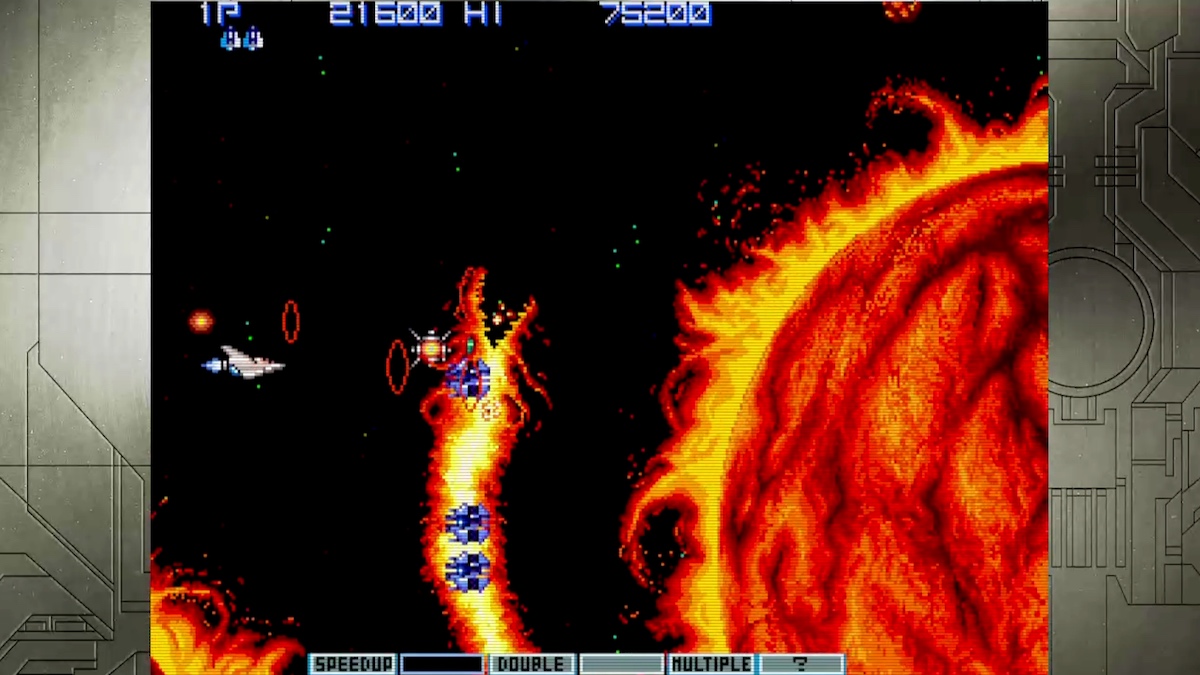 It’s hard to say how thorough and genuinely in-depth Konami went when it came to representing the best of the best here, but it’s clear that the Arcade Classics Anniversary Collection is not the flying start fans would’ve hoped for. For what is the first in a 50th anniversary repackaging of Konami’s finest, the Arcade Classics does the job at emulating/returning players back to the glory days of creative, inventive and (for the most part) long-lasting entrants in the shmup genre…yet little else. But beyond that, beyond the not-so-subtle emphasis on a genre as niche — if interesting — as this, beyond even the hurriedly-scanned in artbook, there’s a whiff of general apathy that lingers over what should be a scour through some of the most creative and surprisingly innovative endeavours the genre has witnessed. As pleased fans will be to see Gradius and company (most of said company anyway) return in pristine, faithful fashion in such a welcomingly retrospective admiration — add to this the barebones features and basic presentation — beyond the most embedded of shmup enthusiasts, the Konami Arcade Classics Anniversary Collection doesn’t quite come across as celebratory as you might think.