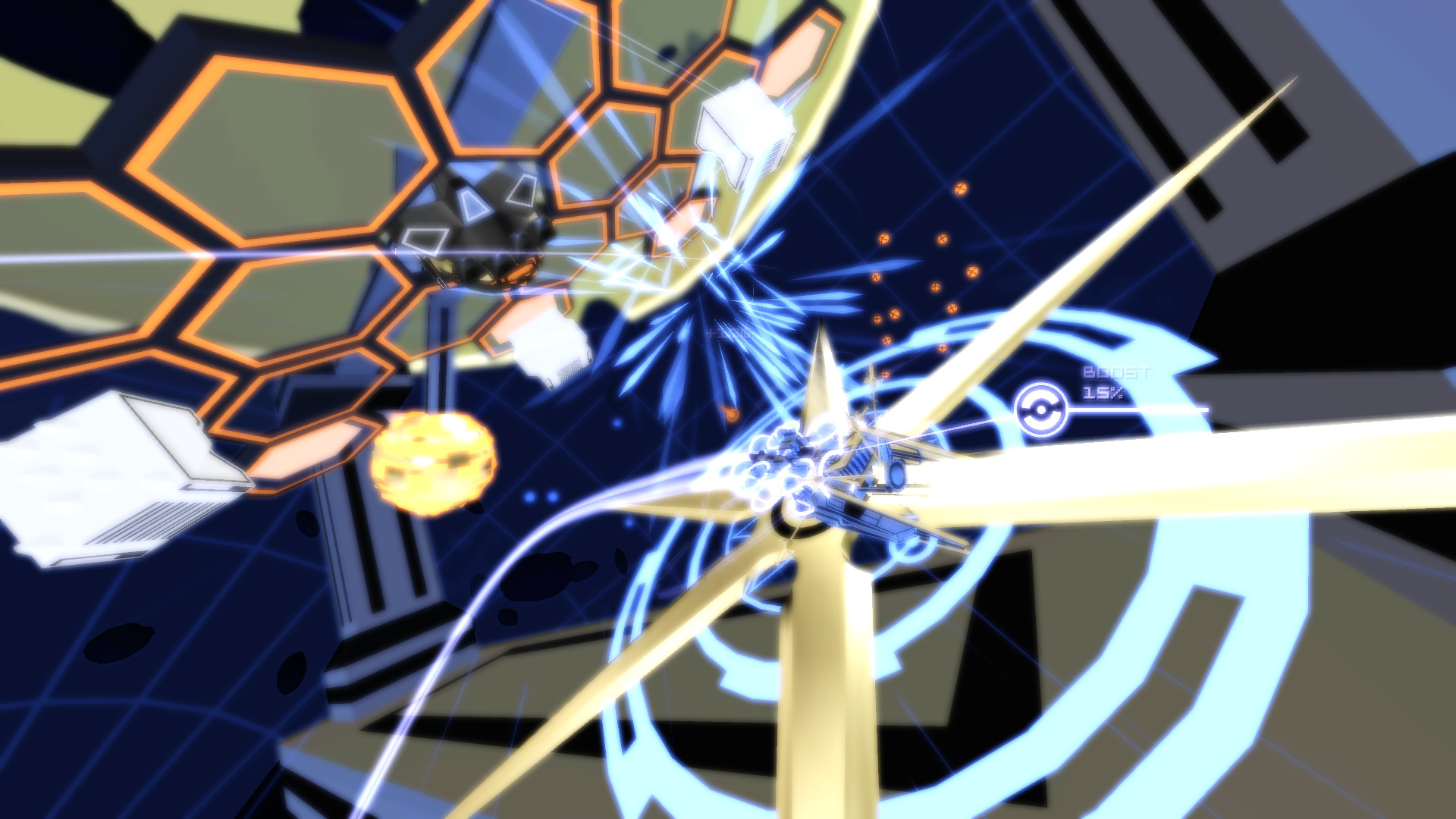 In the beginning there was Space War, and it was good.  A very long series of “begat”s followed, from Space Invaders to Galxian to Wolfenstein to Doom to Descent, but the arcade shooter’s basic DNA remained unchanged despite evolving in complexity and viewpoint.  Here is you, there is them, lets trade firepower!  The jump from overhead to first person was immensely successful, and there are still literally hundreds of games exploring that space in endless variations.  Lose the ground and gravity, however, and all of a sudden the pickings are incredibly slim.  Kromaia is a pure arcade shooter with six degrees of freedom, and while it doesn’t have a lot of company in its genre it does a great job of showing off what’s possible when you really start playing with true 3D action.

There’s a bit of a plot in Kromaia, just enough to hang the shooting off but not enough to worry about.  You’re up against four gods plus a fifth final boss, avenging the mysterious voice of your father who urges you on towards multiple deicide.  At Kromaia‘s start you’re in a small room piloting a craft armed with a high-speed, low accuracy main gun and a burst-fire scattergun for the secondary weapon.  It’s very grey in there and the screen glitches in bursts of static, so the first thing to do is shoot out the door locks and go flying off looking for some color.  A bit of exploration turns up a temple with four gates, one of which is open and bursting with orange light, plus a huge tower that houses the doorway to the eventual final encounter.  Clearing out the level behind the orange gate opens up the green gate, green opens the red gate, and red opens up blue.  Each gate also leads to a new ship with a different weapon loadout, and you’ll need to beat each level with all four ships to open up the final boss, who’s fought in the hub world.  It’s a good thing Kromaia is a fantastically fun lightshow of hyperactive shooting action because otherwise that kind of artificial padding to game length would be completely unacceptable. 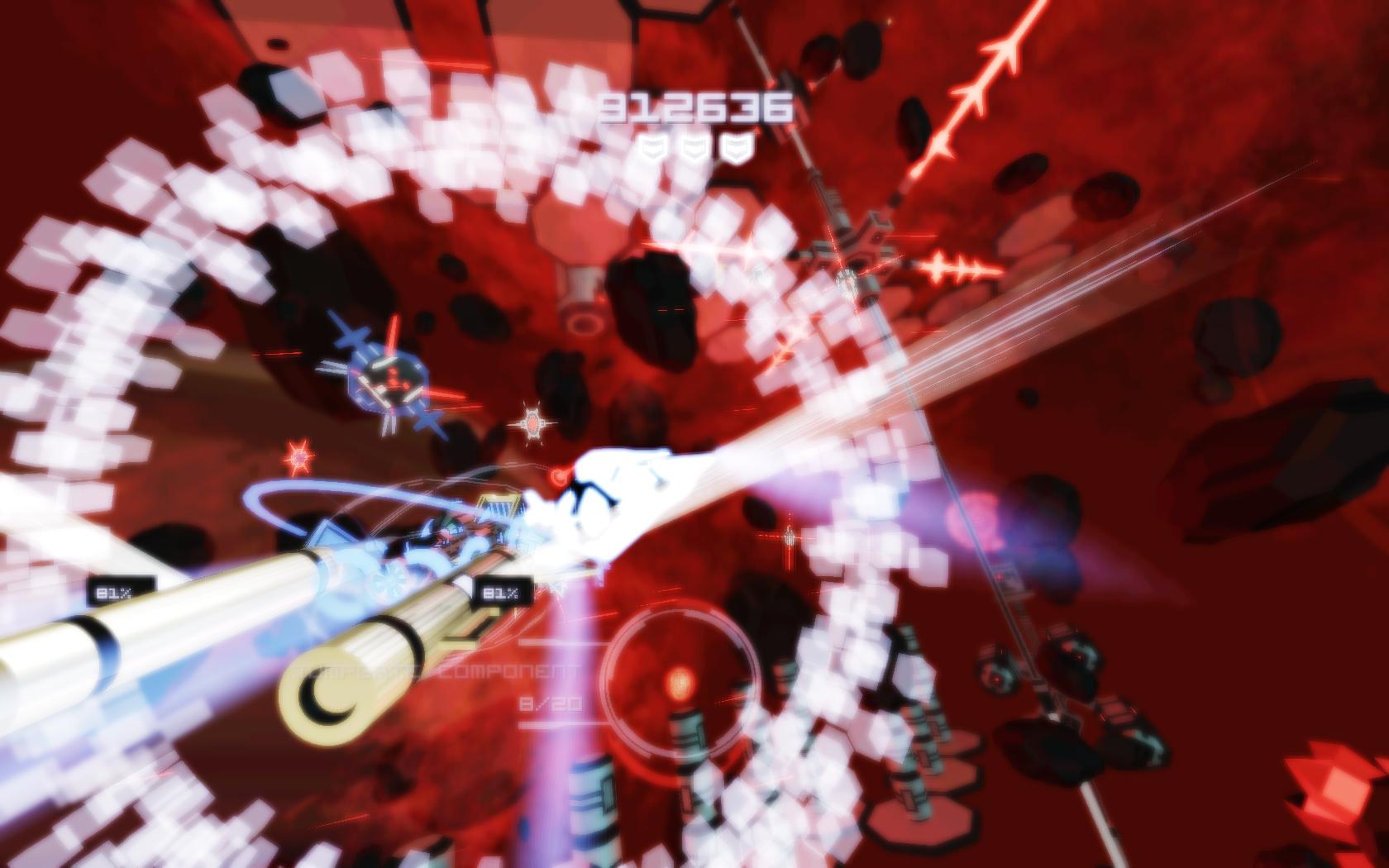 Thankfully, despite a few small issues still being ironed out in various updates, Kromaia delivers pure arcade goodness in six degrees of freedom.  Each level is a series of buildings and paths floating in an endless space between planets, a giant yellow sun hanging in the background.  The objective is to fly through all 20 gate fragments in the levels to awaken the giant sleeping god at the end, and then take it apart piece by piece.  Each level has its own unique architecture and, when you can take a few seconds from blasting and dodging, you can see that they’re filled with paths, machinery, and a logical flow that’s easy to miss amidst the chaos.  There’s a unified style that ties together all the enemies, buildings, various runes, and even the graphic flourishes of the explosions together.  The depth of field filter makes it tricky to take a decent screenshot but, when seen in action, all the color and visual noise integrates with the art to make a perfectly readable shooter that’s more than happy to pick you to pieces if you get distracted by sightseeing.

One of the marks of a good shooter is its range of enemies, ranging from unthreatening to “drop everything to kill it before it can kill you!”.  While most of Kromaia‘s fleet of baddies tends to fall in the middle of that scale, they also swarm in large numbers to amplify the threat and pick away at the ship’s stock of shields until you’re flying along defenseless hoping like mad that the next gate pickup doubles as a level checkpoint.  The occasional mausoleum along the way might end with a spare shield pickup, but you’ll also need to unlock its gate by shooting a set of triggers in sequence and also fight through the small swarm of enemies (plus a camera that’s much happier when not restricted by close walls) to earn the single health drop.  Kromaia is a relentless onslaught of enemies who ram, shoot, bombard, and harry you at every move, and even if you blow apart fifty in a row there’s no promise that number fifty-one won’t sneak through and remove a shield or two of health.  Attacks come from all directions, necessitating continual movement and keeping an eye both on the goal and anything approaching from every possible direction.  Even if you do manage to maneuver out of the way of an incoming swarm of laser-shuriken it won’t do a whole lot of good if you use the boost to slam full speed into one of the countless asteroids littering the levels. 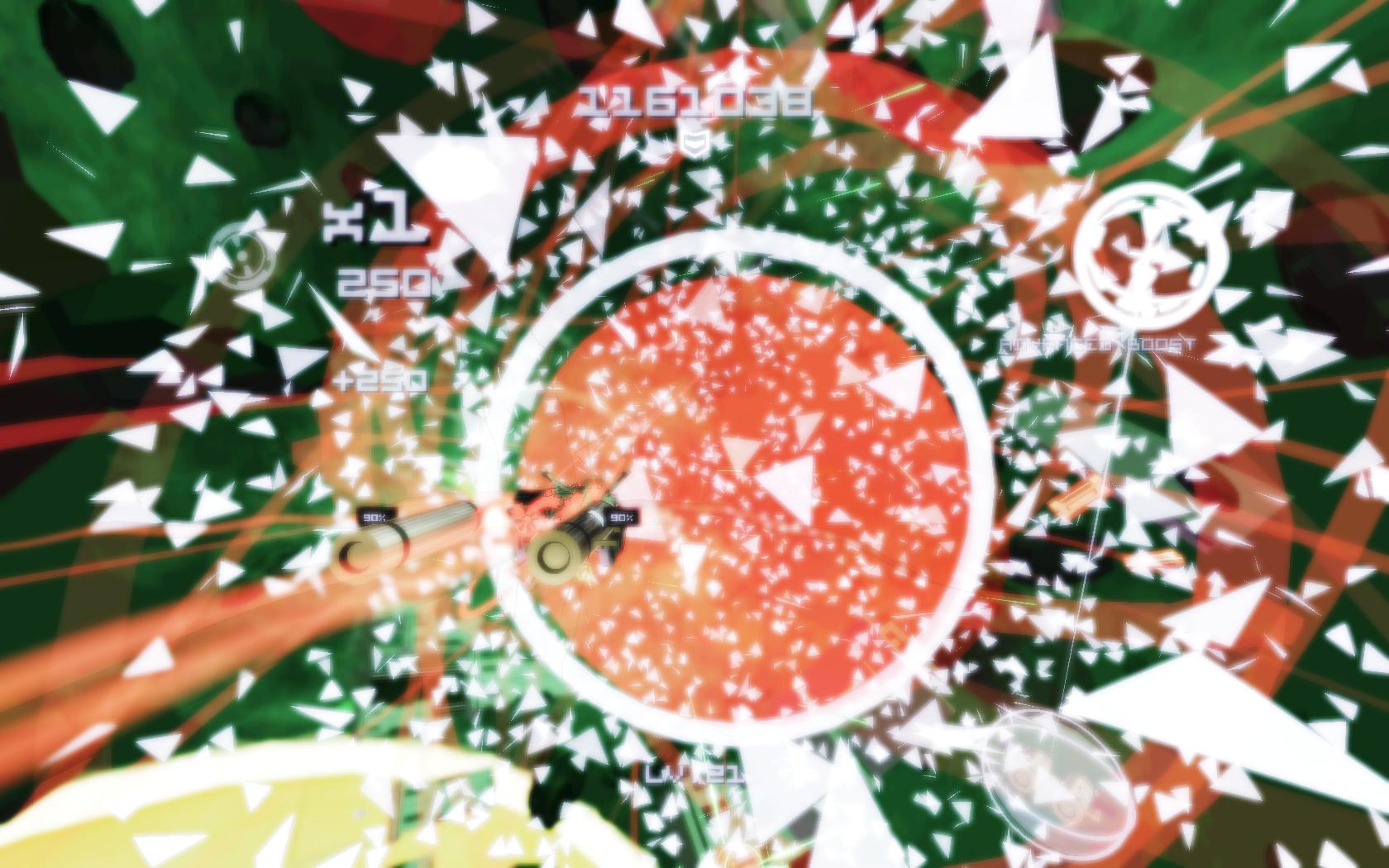 Kromaia is by no means a perfect game, but the action at its heart has an excellent flow.  The camera hates being near walls, I never found any practical use for the hookshot, one of the checkpoints is right under a swinging pendulum that will instantly knock off a shield if you don’t boost out of the way the second you respawn, and the penalty for grazing something (asteroid, enemy, random wall) is to get turned around in a random disorienting direction, but when everything is working, the combat runs hot.  A swarm of spinning stars hovers in the distance, waiting for an opening to charge while off to the side an enemy platform made of interconnected cubes you can shoot off one by one charges up a laser barrage and a pair of light-spear launchers are charging up to turn into a serious threat.  Using the concentrated laser power of the red ship takes out the central joint in the cube-platform, scattering its pieces in a single sustained shot, and then boost takes you out of the line of fire of the spears and charging stars.  Friendly fire is always on, so one of the stars explodes against a spear, and a few precise shots of the regular laser thins the rest of the star herd while the spear-shooters recharge.  By then your secondary charge laser is ready to shoot again to take them both down, but more enemies are flying in to replace the ones you’ve dispatched.  In the meantime there’s another gate fragment in the distance and an interesting structure off to the side that might house a much-needed shield.  It’s been under ten seconds since this encounter started, and the next ten don’t look to be any simpler.  Kromaia is a giant hyper-saturated burst of color, speed and heavy firepower, as stylish as it can be difficult, and it’s impossible not to forgive a few questionable design elements when the enemies are swarming and the action takes off.