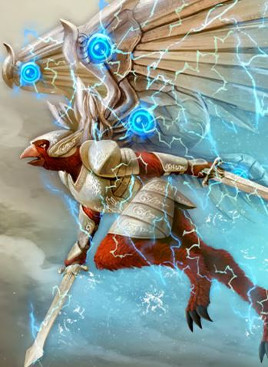 Games based on popular movies have a spotty track record. They run the gamut from near greatness to absolute garbage, with many fitting into the latter category. Krut: The Himmaphan Warriors is a 2018 CGI animated film from Thailand that doesn’t appear to have amassed a following in the western world. I didn’t know the film existed until learning about the game Krut: The Mythic Wings, which is based on the film. Knowing nothing about the film when starting to play may actually be advantageous where there’s no preconceived notions about what the game should be like, making it easier to just judge on its gameplay merits.

Krut begins with the avian race Garuda, or Krut, fighting off an invasion from the race of ogres known as Raksod. The Raksod are victorious, taking over the Krut land and scattering their warriors. One of these warriors named Veera wakes up in an unfamiliar land, grievously wounded from the encounter. An elder Krut had nursed him back to health and gifted him with the ancient mythic wings. Unfortunately, the wings’ great power was lost over the time and the Veera needs to fight his way through the island to meet the leaders of other societies to unlock the full power of the wings and reclaim the Krut land from the Raksod.

Krut is a 2D action platformer inspired by soulslike games. This means that even on the easiest of the three difficulty settings running in and trying to button mash the way to victory is an ill advised way to approach things. Many of the threats encountered on the island will make short work of Veera, whether it be armed warriors, fire-spewing plants or worst of all, giant crabs. Taking a more patient approach to learn their behavior patterns and making judicious use of the dodge button can make things a lot easier. The checkpoint system isn’t the most forgiving one, but if the player is paying attention, subsequent tries are much easier than the first even on higher difficulty levels. 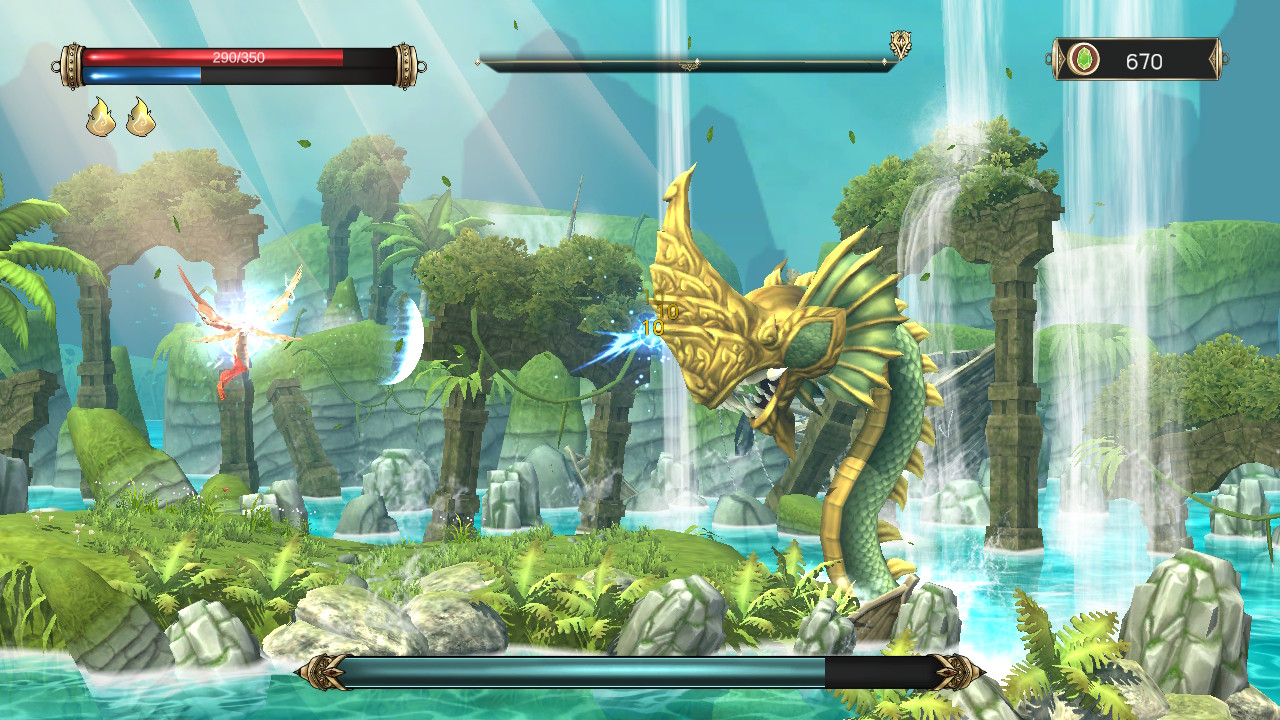 Each level has three different checkpoints where Veera will spawn if he’s slain. The first is at the beginning of the level, the second is right before the miniboss and the third is before the end level boss. The first checkpoint is free, but the other two cost green energy to unlock. Choosing to unlock the checkpoints depends on how brave the player is feeling, but unlocking them also gives the opportunity to become more powerful by purchasing greater attack power, increase maximum health or extra lives, among other power ups. The appearance and environment of each level is varied, whether it be a beach, desert, shipwrecks or city, but the progression is the same. Each level has a midway boss halfway through and an end-of-the-level boss, which has dialogue that results in Veera having to battle them in order to get what he needs, though the circumstances behind each fight vary.

The gameplay of Krut is a retro-style 2D action platformer. Veera dual wields swords and because of his wings is skilled at jumping. When he powers up his blue spirit meter, Veera can temporarily gain the power of flight and shoot projectiles at his enemies. This boost to power is short lived, but can used to gain an advantage against whittling down the powerful bosses health bar. The levels are a mix of platforming and battling various enemies. The platforming can be tricky in some cases where it’s not always immediately clear what’s a solid surface, but beyond that there’s nothing too difficult when it comes to platforming. Every enemy should be treated as a threat, but by studying their behavior dispatching of them can become easy with patience and strategy. 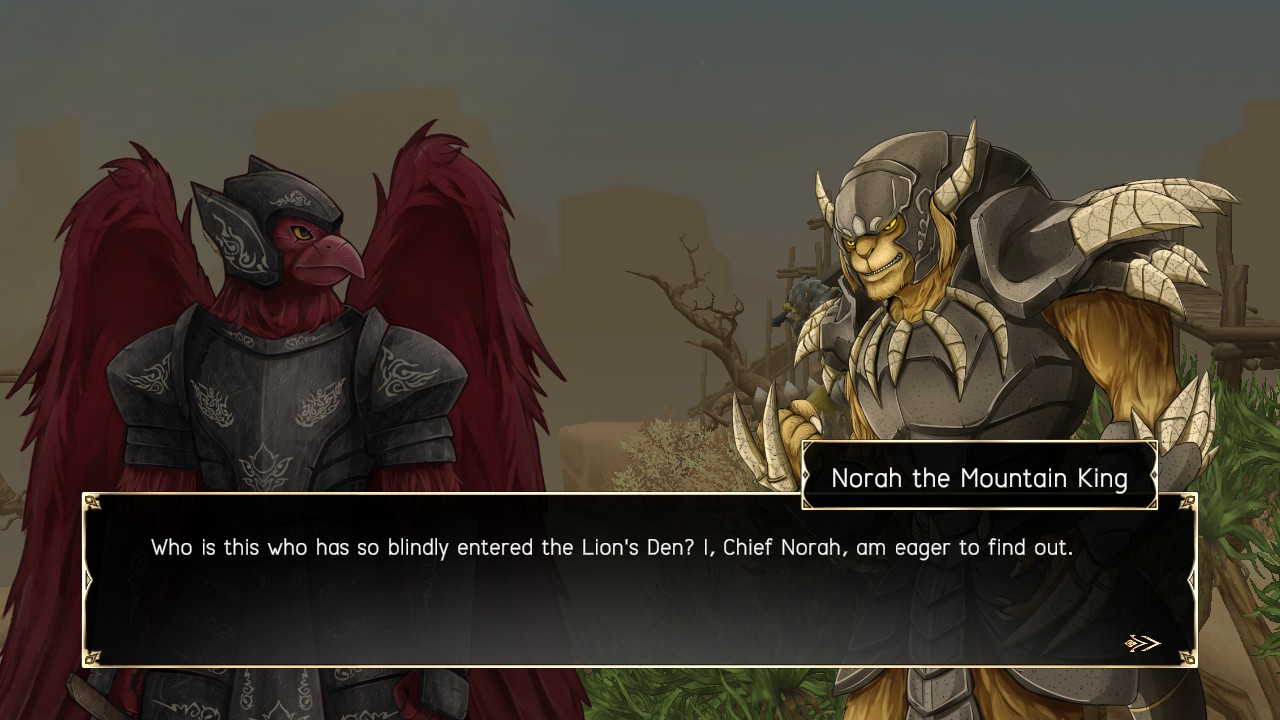 Krut: The Mythic Wings is an enjoyable throwback to the action platformers of yore. Aside from a few tucked away treasure chests there isn’t a whole lot of reason to travel off the beaten path. The mostly-linear progression through the six levels offers difficult combat challenges and some not-so-difficult platforming. Most of the challenge comes from the boss battles, but it doesn’t take too long to figure out the best way to dispose of them. One peculiar design choice is there isn’t a save feature. When the game over screen rears its ugly head, players can continue from that level, but once they exit the game they need to start from scratch at the next playthrough. This isn’t a huge deal given that Krut can be completed in under two hours, but it would be nice to have the feature included.

The graphics of Krut aren’t going to be putting too much strain on any machine built in the last decade, but are gorgeous nonetheless. The character models and environments create a rich and vibrant world that’s a joy to view. The game does an admiral job of copying the visual style of the film that influenced it. The gameplay isn’t too complex which works for shorter games like this. Jumping, dodging and attacking are the three main things the player needs to be concerned with it’s simply of matter of timing of everything. Unfortunately the challenge is enhanced by the controls not being as tight as they should be. Veera doesn’t always turn around or change his attacks up as quickly as the button inputs suggest he should. The load times were virtually nonexistent on PC, but lasted about 5-10 seconds on Switch whenever Veera needed to respawn or start a new level. 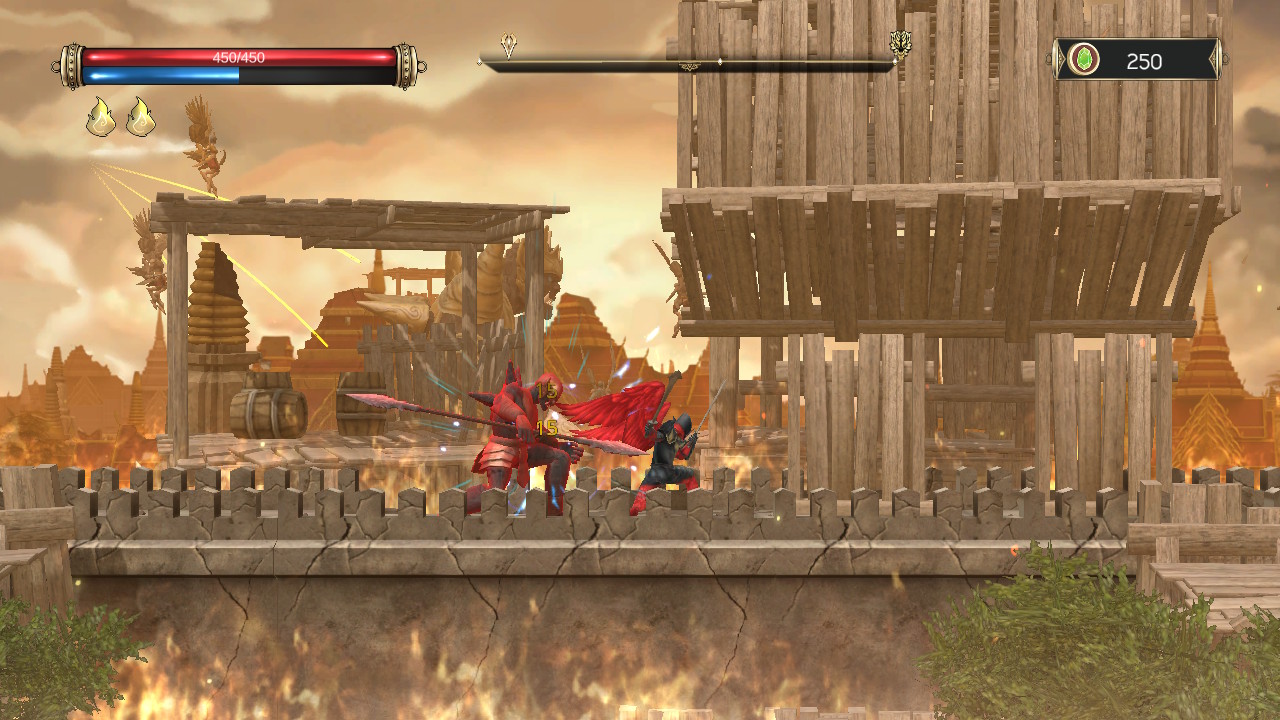 Krut: The Mythic Wings uses an animated Thai film to create a 2D adventure. The story’s theme of having to gain the favor of other tribes through combat isn’t the most original, but its execution with the different creatures helps make the presentation more interesting. The simple gameplay of Krut suits the relatively short length of the game. Like many classic games it tries to use challenging enemies to extend the playtime, but it doesn’t take long to figure out the game mechanics and enemy patterns, making boss encounters challenging at first but still beatable on the first or second try. The enemies change their appearance throughout the levels, but don’t really change their behavior pattern, making every battle feel pretty much the same. Most of the difficulty comes from substandard control response. Krut: The Mythic Wings‘ price of entry can make it worthy for fans of this style of gameplay, but as the price tag suggests, there isn’t a ton of depth or replay value.