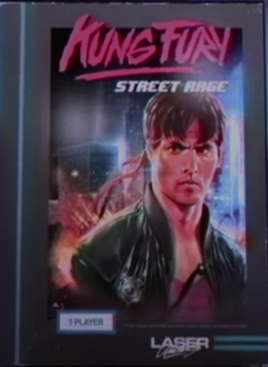 Kung Fury came to life via crowdfunding and delivered a loving homage to ’80s action movies. With a ton of bloodshed, a bit of sex appeal, slick cars and The Hoff, it’s just about perfect. It’s free on YouTube and El Rey gave it a network home, where it’s a perfect fit for a place with Lucha Underground and Kung fu movie marathons. Alongside the movie, a game was released with the subtitle “Street Rage.” Of course, such a title evokes Sega’s legendary Streets of Rage games, and that brings out about some interesting comparisons. Unfortunately, this doesn’t work in Kung Fury‘s favor.

Kung Fury: Street Rage is a two button brawler that blends beat-em-up gameplay with a bit of rhythm gaming. There are no movement controls and every attack is done by either pressing left or right, or using the X and Y buttons instead. Given that you’re just attacking to the left and right, going with the d-pad directions makes the most sense during gameplay and allows for slightly snappier movement. There’s also a bit of a shooting game’s score multiplier thrown in too. The more successive shots you land without hitting either left or right without landing a blow, the higher your multiplier goes up. The end result is that you’ll get a massive score if things go well, and once you get the hang of the game, it’s a lot of fun in short doses.

The key is to worry less about being hit and more about hitting as many enemies as possible. You’ll fight off evil nurses, Nazi sympathizers, and of course the Nazi experiment kung fu robots. The core game blends the look of Streets of Rage (with more lush environments) and One Finger Death Punch’s gameplay. Unfortunately, while that had twitch gaming down pat, this doesn’t quite get it right. Movement is controlled by d-pad or button presses, but moving without attacking resets the multiplier. Going to the right is something you’ll instinctively want to do, but with only three hits until a game over, you’ll want to avoid it because that sics harder enemies on you. 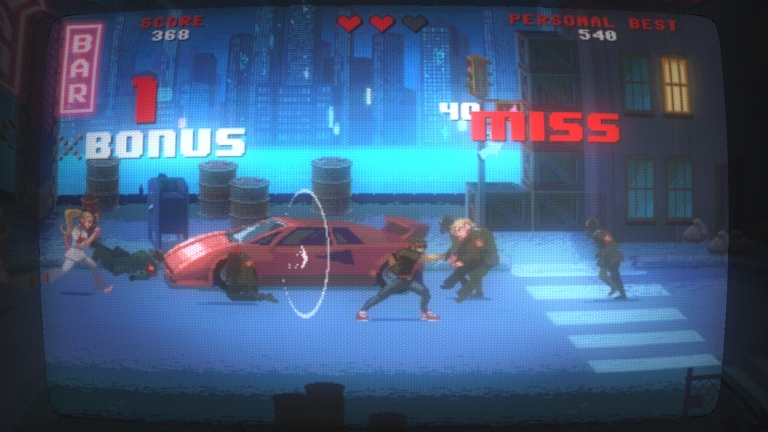 With only three hits until a game over, a ton of death happens in the process of learning. There is still some fun to be had before death, however, as the action is quite fast. Unfortunately for Street Rage, beat ’em ups gave you a lot of variety in their prime. Double Dragon had a good mix of weapons and enemies, Streets of Rage raised the bar for soundtracks and gameplay, while Final Fight is probably still the best overall looking franchise in the genre and it got far more advanced by the third game. While the genre was never known as having depth, they at least gave you more than a few ways to skin a cat and you could pick the way you wanted to beat enemies. Here, you can nut punch folks, kick them, punch them, or shoot them — but you can’t pick what attack you use. You press an attack and things just happen without much rhyme or reason.

Kung Fury nails the graphics and overall feel of the CRT TV days, though. It’s pretty much perfect, with some impressive on-screen scanlines and lighting that accurately reflects how a TV would look with a light source on it. The limited animation for moves are great as you get some fluidity, but not so much that timing becomes impossible. The developers struck a good balance there and deserve credit for it.

The game features outstanding sound design. The whole idea of Kung Fury is to show adoration for the ’80s and the use of chiptunes here works marvelously. The music is limited, but catchy. There’s also a ton of voice work, and while that was uncommon for beat ’em ups, games of that time did have speech — especially in arcades, so it works. It’s unlikely that it would be as clear as it is here though, but since they’re going for more postcard version of the ’80s instead of an accurate version, it’s effective. Attacks are satisfying, with grunts and clanks sounding like they’re at least doing a solid amount of damage. The electrocution sound effect is hilarious, and even comes with a comedy joy buzzer x-ray à la classic cartoons. 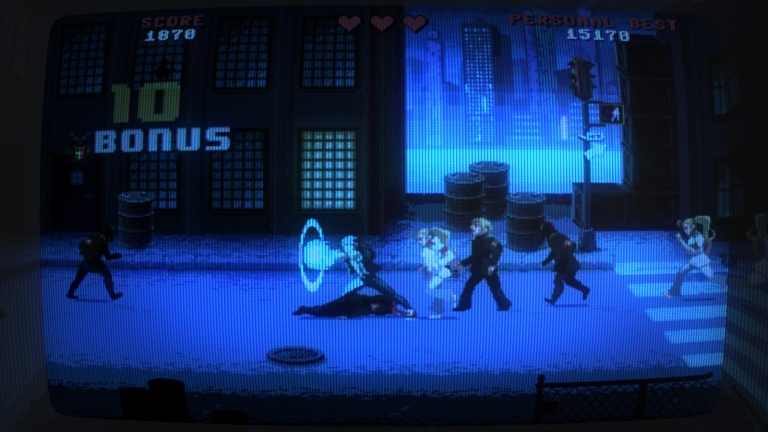 Kung Fury: Street Rage doesn’t do much, but what it does is done well. In terms of being an homage to past beat-em-up classics, however, it falls quite a bit short. It gets the look right, but little else. The super-limited gameplay underdevelops the concept of “a beat ’em up using the Kung Fury license” and only makes you want a proper beat ’em up instead. As an appetizer, it works, but isn’t something that is going to leave you all that satisfied. Hopefully, this was just a test run for a more fleshed out experience, because the ingredients are there to make a great game — this particular formula just didn’t result in one.