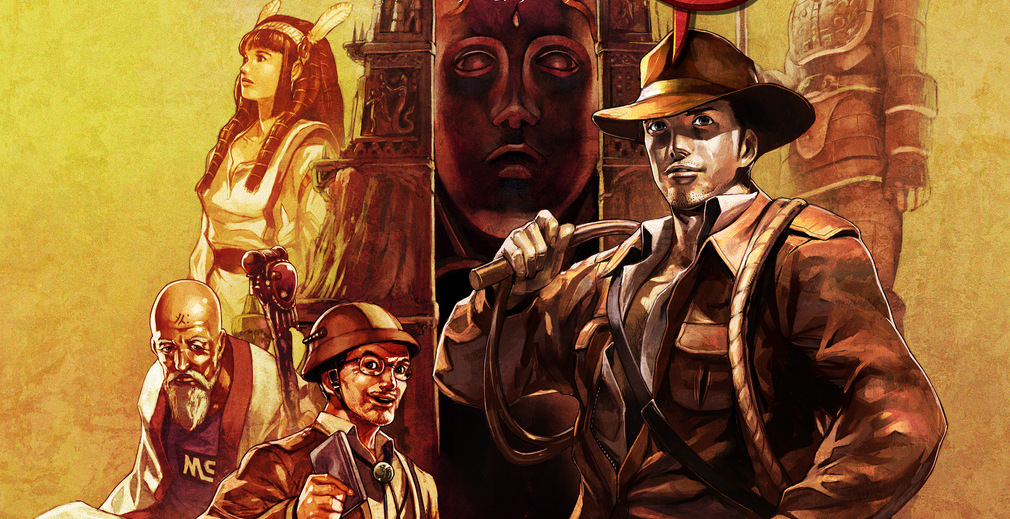 Remember those 8-bit games that used to kill you a lot, then kill you some more, and after that keep on killing you until finally you figured out the right blend of enemy behaviors and puzzle solving to reach the next checkpoint? The 2D side-scrolling series of interconnected rooms requiring constant backtracking and re-exploration, just in case something new opened up? That’s La Mulana in a nutshell, and it’d be easy to just walk away after putting a (high) point score at the end, but that’s a bit much like cheating. So, here’s the rest of it- 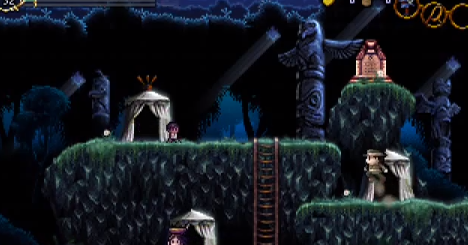 The ruins of La Mulana hold many secrets, and like all curious archeologists, you’ve got a whip and an unwavering determination to see what’s at the bottom. The ruins are loaded with enemies, puzzles, and traps, though, and, as has been mentioned, will cheerfully kill you stone-dead. The only way to progress is to learn from experience and try everything. Sometimes you’ll get rewarded, other times trapped in a room with no way out but the Reset function, but every death teaches you a bit more about how not to fail so much.

Take a room in the Egypt-themed section of the ruins where there’s a pedestal sitting at the bottom of the room. After clearing out the enemies, the logical thing to do is to put a weight on it to see what happens. Sure, there’s skeletons all around, but you can’t just leave it alone. The logical thing to do is to place the weight and be ready to run at the first hint of danger, but in this case “danger” isn’t a falling chunk of debris, it’s a pair of gates closing on either side of the pedestal. Nothing for it but to reset back to title and reload. You learn very quickly to save after every new boss defeated or item found. 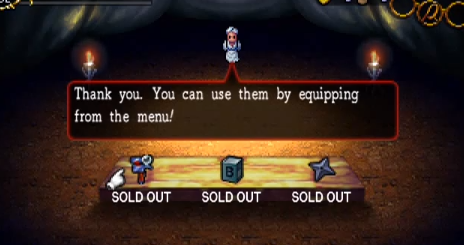 The reason you’d have tried this in the first place, other than an obsessive-compulsive need to trigger every switch just to see what happens, is because gathering the items necessary for advancement requires endless experimentation. The tablets in each area give hints on what to do to open the numerous blue treasure chests, but you’ll also need to use your handy scanner to check on all background objects as well to find out where to use this information. The background details aren’t there just to make the level look pretty, but rather to identify a statue, carving, or other bit of ornamentation. La Mulana is every bit as much about solving the ruins as it is about whipping monsters and platforming.

Which isn’t to say there isn’t plenty of good platforming to be had. The ruins are filled with jumps, spikes, drops, and any number of creatures determined to bounce you into them if you’re timing is off. The controls take a bit of getting used to, primarily due to some odd in-air inertia, and you can’t jump on to or off of a ladder, but once you get the hang of it you can pull of some very precise platforming, whipping bats out of mid-air and just missing the spikes on the way down. Thankfully, you can’t take damage from falling, but dropping too far will leave you stunned for a second or two. 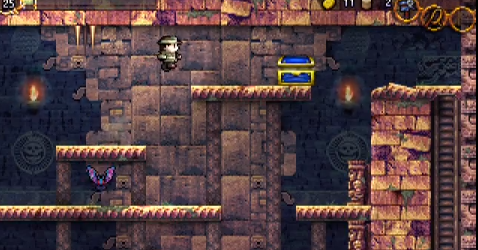 What makes La Mulana work is the way all its elements come together. It’s never about straight combat, or platforming, or even puzzle solving, but rather a combination of the three at all times. Each room has something in it worth looking at, even if you’re just passing through. It might be a clever platform layout, or a tablet to double-check in case further experience throws some light on its message, or even a treasure chest still locked and waiting for its puzzle to be solved. La Mulana is hard, and it will kill, trap and frustrate at every opportunity, but every bit of progress is a further temptation to keep on exploring. You’ve got a whip, a hat, and a computer. What more could you want?