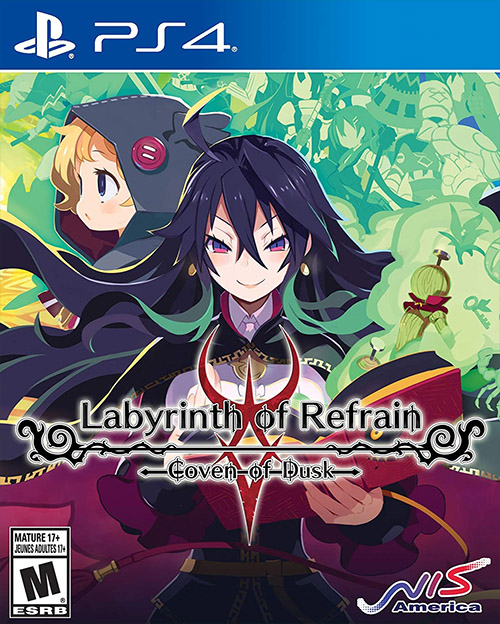 Labyrinth of Refrain: Coven of Dusk

There’s plentiful investment to be had in a game like Labyrinth of Refrain: Coven of Dusk — as much a mouthful that name might be. For a game that takes a more traditionalist approach to dungeon-crawling — a sub-genre of RPG that has existed for nearly four decades now, finding notable popularity in both sides of the gaming world — and executes it with a serviceable approach, Nippon Ichi’s dedication to that often slow, patient, grid-based traversal and all the uncertainty that comes with it, is at least commendable. Despite renowned and notable series like Wizardry, The Bard’s Tale and even Phantasy Star often confined to the past so far as status goes, that’s not to say that recent efforts aren’t leading the charge to keep the sub-genre from feeling forgotten.

Atlus’ dual franchises a la Etrian Odyssey and Shin Megami Tensei have long maintained the first-person aspect (though the latter, it can be argued, has tended to push its story/narrative elements more so than its structure) and while games like Darkest Dungeon may not implement a first-person perspective, few would deny that the notion of a slow-crawl through treacherous environments hasn’t been influential in crafting such experiences. Part of the charm of this sub-genre — and one Labyrinth of Refrain at least manages, even in its most sluggish of crawls — is that very risk:reward mentality. Of deducing when it might be potentially rewarding to sink further into the labyrinth layout of a given floor and knowing when it might be wise to consolidate what one has acquired thus far and retreat back to ground level.

With an ounce of strategy thrown in for good measure, as well as some intriguing (if cumbersome) mechanics sprinkled in, Nippon Ichi’s latest effort to deviate away from their prime Disgaea fame isn’t without its quirks. Warranting a fair sinking an hour or two into its multi-floor dungeons and while a little heavy on the screen furniture, does at least throw up some neat ideas. Despite the art direction — namely the character design with its exaggerated details — remaining relatively unchanged. Once, of course, you get past assembling your team of puppet soldiers and the many menus of text that the game is sadly littered with. A relatively mind-numbing asset of RPGs in lofty supply here as it turns out and one you’re, like it or not, going to have to tackle eventually. 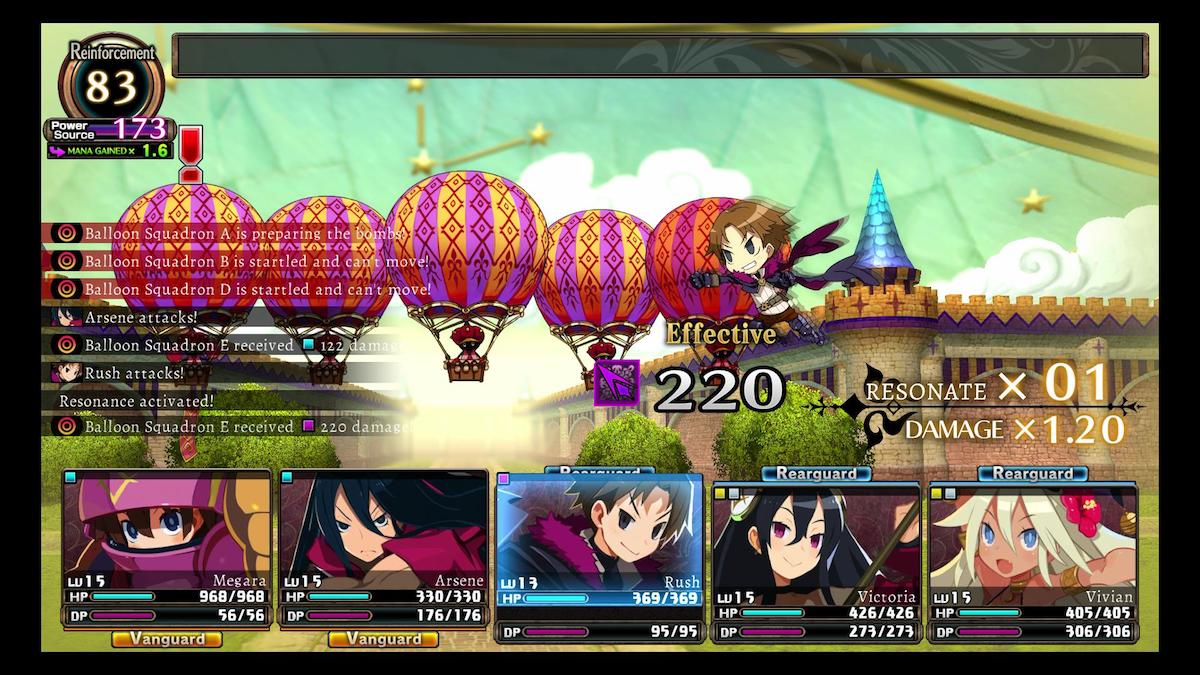 Let’s start proceedings at the beginning of one’s preparations then: players are required to build an army of puppet soldiers from a selection of six classes. The difference between this and the conventional set-up of RPG parties is that soldiers are placed into groups called Covens with a maximum of five Covens able to enter a dungeon at any given time. This mechanic expands/complicates further still with latter-acquired Pacts — the means at which Covens are established, which offer particular bonuses and perks that better service particular classes — allowing for a maximum of three acting fighters per Coven to partake in combat (a potential fifteen attackers) with a further five units providing ability-buffing support for each thereafter. We’re not even past the early proceedings and already the game throws so much at you to consider purely on party set-up alone. This is before you even get into the real meat of combat where such things like chaining Resonance (to increase attack power), Donum (the game’s substitute for magic/skill points) and identifying the best weapon types to use add even more layers to what should be a simple trudging through grid-based dungeons.

Perhaps the best thing you could say about Labyrinth of Refrain as an RPG, is that despite all this, it gets away with it…just. Part of the reason for this is in its flexibility and the way it which it opens up to plentiful amounts of customization. From establishing how a newly-crafted soldier levels up to where they’re positioned in a given Coven, you can’t fault Nippon Ichi’s passion in versatility as much their desire to offer as many tools for a player’s disposal both in and out of the very dungeon-tackling process. Because of this, investment in the depth of control quickly becomes a necessity rather than an optional add-on, but Labyrinth of Refrain (eventually) warrants itself that further investment. The problem then, for the game as a whole, isn’t that there’s a lot of elements and subtle, reactionary mechanics to consider — though the densely-packed menus and generally cluttered interface admittedly doesn’t help. 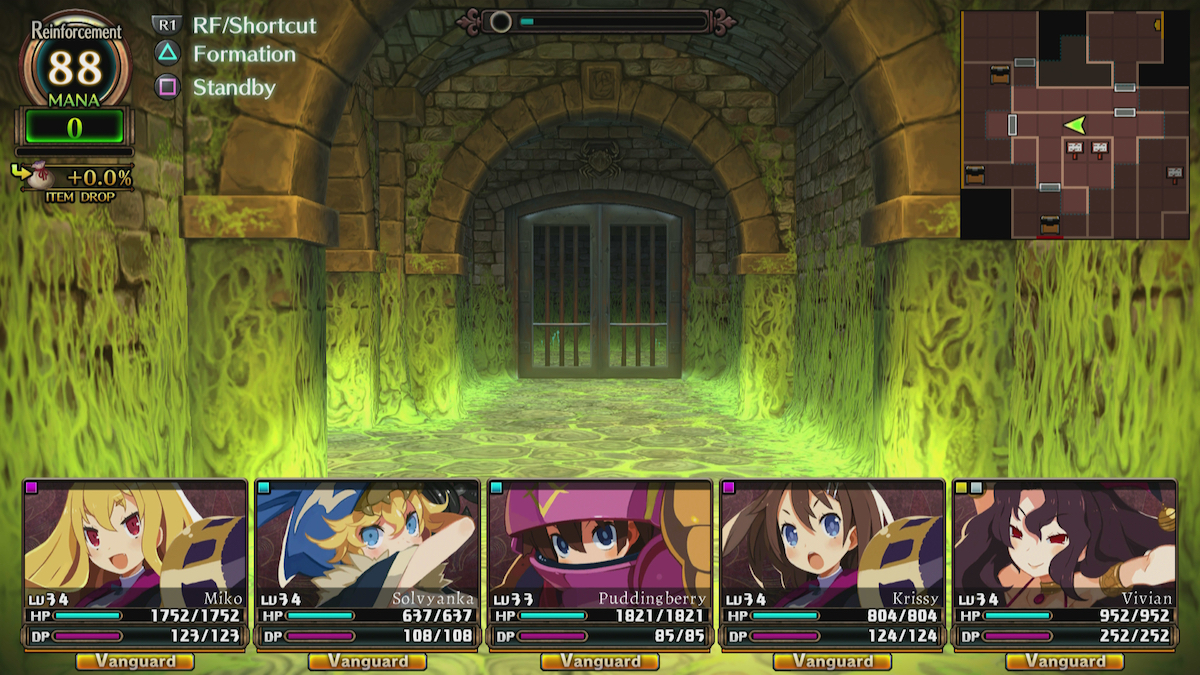 The problem, is that very few (if any) of these additions feel impactful on the gameplay as a whole. Similarly to another NIS-published title, the combat finds itself ironically confined to mere frantic spamming of the attack button — soldier characters dealing with most enemy encounters without ever delving into class-based skills or the like — before the players return once more to the plodding nature of moving through dungeon floors — eventually taking notice of the sub-par resolution of certain environment textures in part. Curious it might genuinely be to mix-and-match units, working out which characters best suit a given role or position in a team (even deciding whether it might be best to have a Coven suited to the upfront Vanguard stance or supportive Rearguard by contrast), in the end, Labyrinth of Refrain — on top of heaping so many statistics on a player’s shoulders early on — does a terrible job at implementing these in an impactful way. Of course the argument can be made that Nippon Ichi at least serve that dedicated base of people who relish the kind of RNG, number-crunching, loot-heavy, role-playing that relies entirely on switching out weapons/armour at seemingly every waking turn.

But in contrast to a whole host of grand JPRGs (where, worse case scenario, menu-hopping becomes all-too-common an affair), Labyrinth of Refrain’s own encumbering the experience with jumping in-and-out of menus feels not only mandatory, but ultimately pointless. It wouldn’t appear so confounding had the combat itself feel structurally sensical. But again, Labyrinth of Refrain’s presentation seems fixated with its aesthetic, rather than its practicality or ease of use. Even such things like the action prompts that appear center-left of the screen (an obvious throwback to the original roster of 80s/early 90s dungeon-crawlers) or the scurried animations that pop up during a successful chain attack/critical hit feel tacked on. They’re simply present for aesthetic purpose and distraction, rather than serving some practical use. Even modern-day necessities like illustrating the order of player/enemy turns (something even a recent release like Octopath Traveler makes sure to implement, in all its visual attraction) are disappointingly absent. 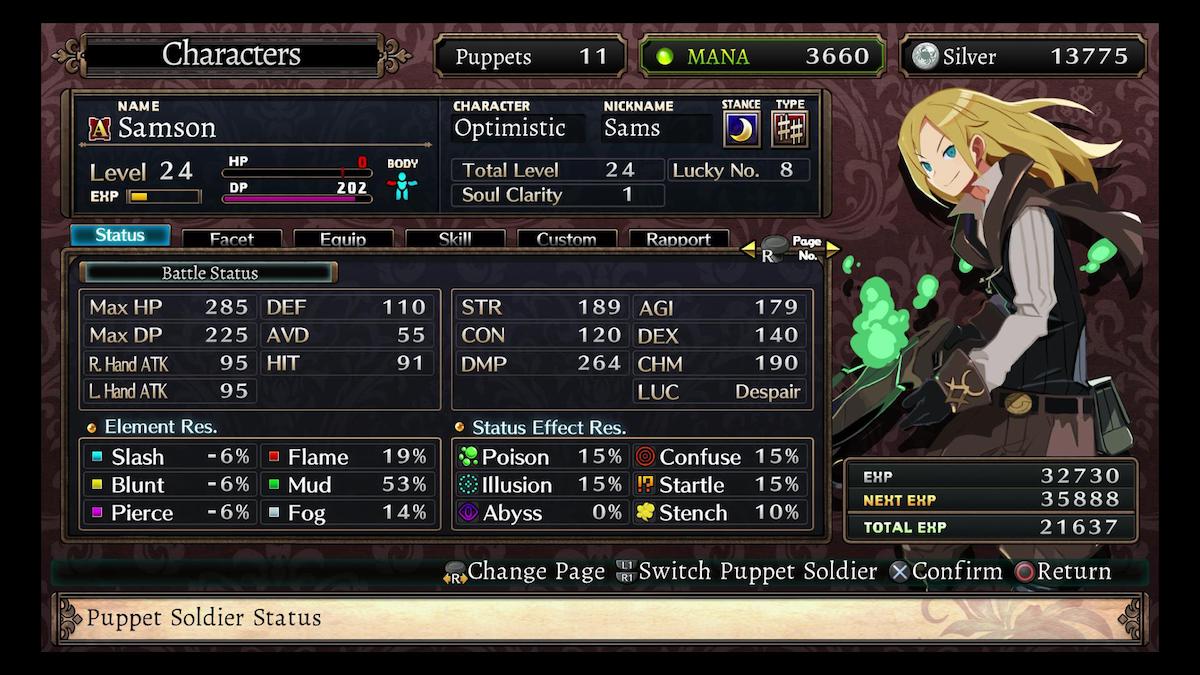 But all this pales in comparison to what might be Labyrinth of Refrain’s biggest criticism and one that, sadly, puts an almighty dampener on the genuinely fair and modest enjoyment one can find in short spells. And that is of course the means at which the game structures its objectives and translates to the player the requirements needed, as briefly mentioned previous. Or rather, what it doesn’t translate; indeed, one of the biggest complaints of this game as a whole is its dire communication and at points forcibly walling off progression for the sake of meeting some arbitrary requirement. Some of which are confined, for example, to acquiring a set number of a randomly-generated item drop.

A mere “explore more of the labyrinth” (or words to that effect) is what flies as an explanation to one’s objective, which could mean anything from mapping a required amount of a dungeon floor, to beating a particular higher-ranked monster, even reaching a particular point before the game stops you and proclaims that, yep, you’re done and now it’s time to head on back to ground floor. Only then does the game allow you to progress the story — or what one can deem is a story — so as to trigger the next cutscene which in actuality serves so little purpose outside of occasional exposition and plot backstory (not to mention some poor attempts at comedy and fan-service alike), the two polarized elements, the story and the gameplay, might as well be two completely standalone games. 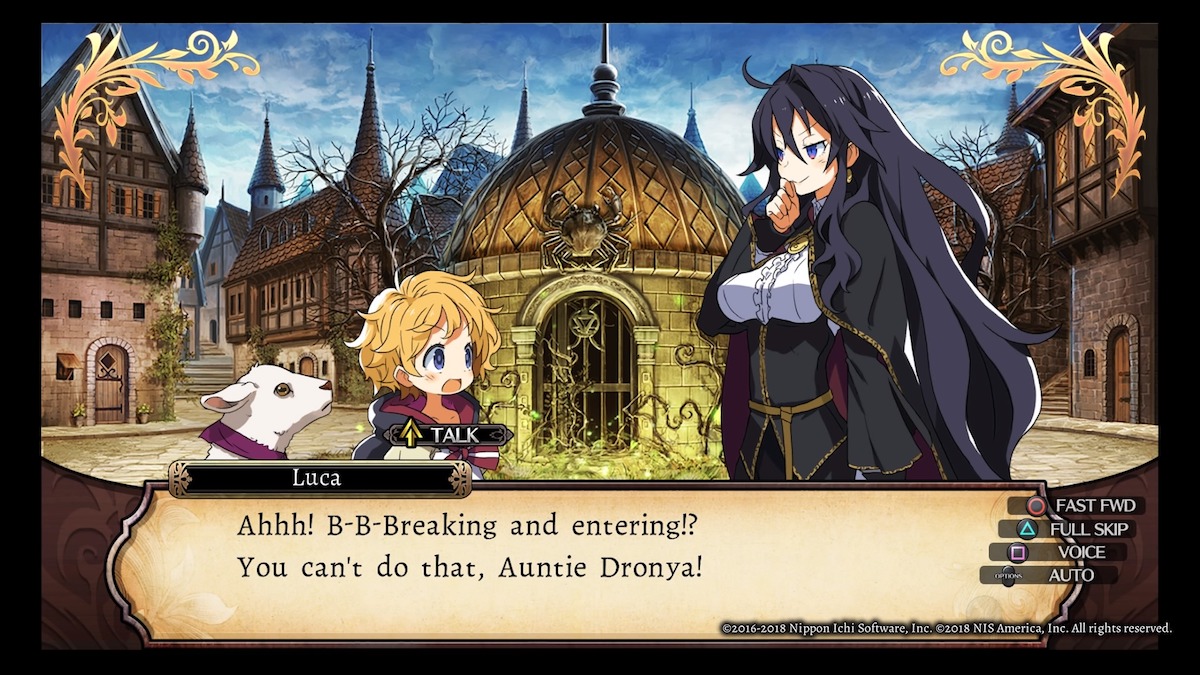 There are nice ideas and a plentiful amount of passion put into replicating the look and feel of classic first-person, dungeon-crawling in Labyrinth of Refrain: Coven of Dusk. If one were to approach this with the intent of short, couple-hour bursts with little aim other than the acquiring of more loot or leveling up one’s disposable units, the game services those eager on that aspect of dungeon-crawling. Sadly, Labyrinth of Refrain is a game far too convoluted with illusionary depth to be considered wholly enjoyable. With a dispensable story, poor mid-game communication (that often feels like a deliberate attempt to waste player time) and a hefty number of interfaces requiring a fair amount of cleaning up, Nippon Ichi’s attempt to alternate from their usual Disgaea forte, though intriguing in a few areas, ends up being frustrating and cumbersome to the point of cancelling out the enjoyment it initially creates.