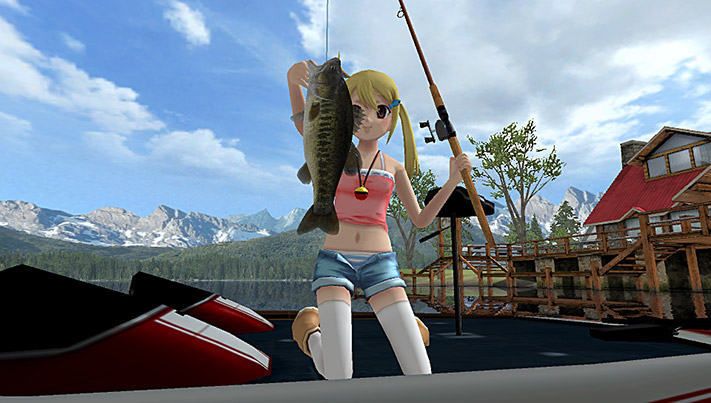 Alright, so a fishing game is not exactly the killer app PS Vita needs right now, but while finicky gamers are holding off buying the console until that one special game comes along (as if Gravity Rush, Lumines, and Persona 4 Golden weren’t enough), current owners are simply looking for fun titles to warrant busting out the system as much as possible. While “fishing” may be synonymous with watching paint dry for some (both of which, granted, can be done simultaneously), games like SEGA Bass Fishing have proven the genre can offer an entertaining experience to even the most adversed to the sport/livelihood/method for dinner. Let’s Fish! Hooked On takes the usually serious genre and adds a layer of Hot Shots Golf style casualness that only the Japanese could do.

Let’s Fish! is not the sort of game that can be picked up and played with no prior knowledge of the genre. While it’s far from complicated, there are many controls and nuances at play that are challenging to figure out without a tutorial. A tutorial is included, but it’s simply a basic environment with no time limit that displays all the controls before starting; there’s no correction of technique or tips of any sort throughout. While this glorified manual is a necessity to play, as it’s the only way you’ll figure out the controls in game, it’s an enormous oversight in a game dependent on knowing exact combinations. 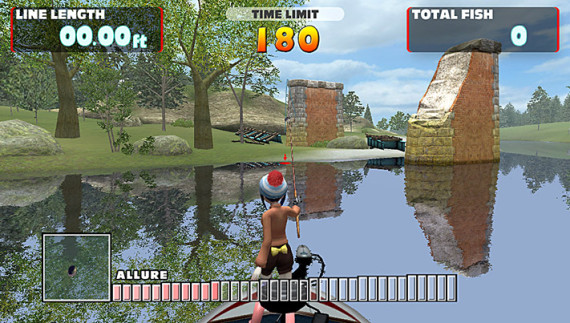 Two game modes are included: Challenge and World Tour. Challenge gives various goals on stages to complete, such as catching six pounds between two fish, which can be uploaded to an online leaderboard. The mode is really just a progression free version of the main game for advanced players. World Tour is the main draw, which features 35 Amateur, Professional and Master Class tournaments to take on. The adventure begins by selecting four characters comprising of Jamie, Ryuji, Kano or AI — all ranging in age from 17-19. Jamie, the female that inexplicably has fangs and her panties exposed at all times, is arguably the main character of the game, while her crush Ryuji is the sole character with testosterone. Surprisingly, each character features their own unique story played out in voiceless cutscenes, which while largely disposable, are commendable simply for existing in a fishing game.

After choosing a character, it’s time to spoil them by grabbing a rod and hitting the boats. Each class features multiple tournaments that are cleared by completing goals almost always including a certain amount or weight of fish. No matter what the goal is, you’re simply catching fish, so it truthfully doesn’t make a difference. If you’re in first place after 12 events (representing a year), you advance to the next class. Skill points are rewarded that increase player ability, while bonus lures are granted along the way. 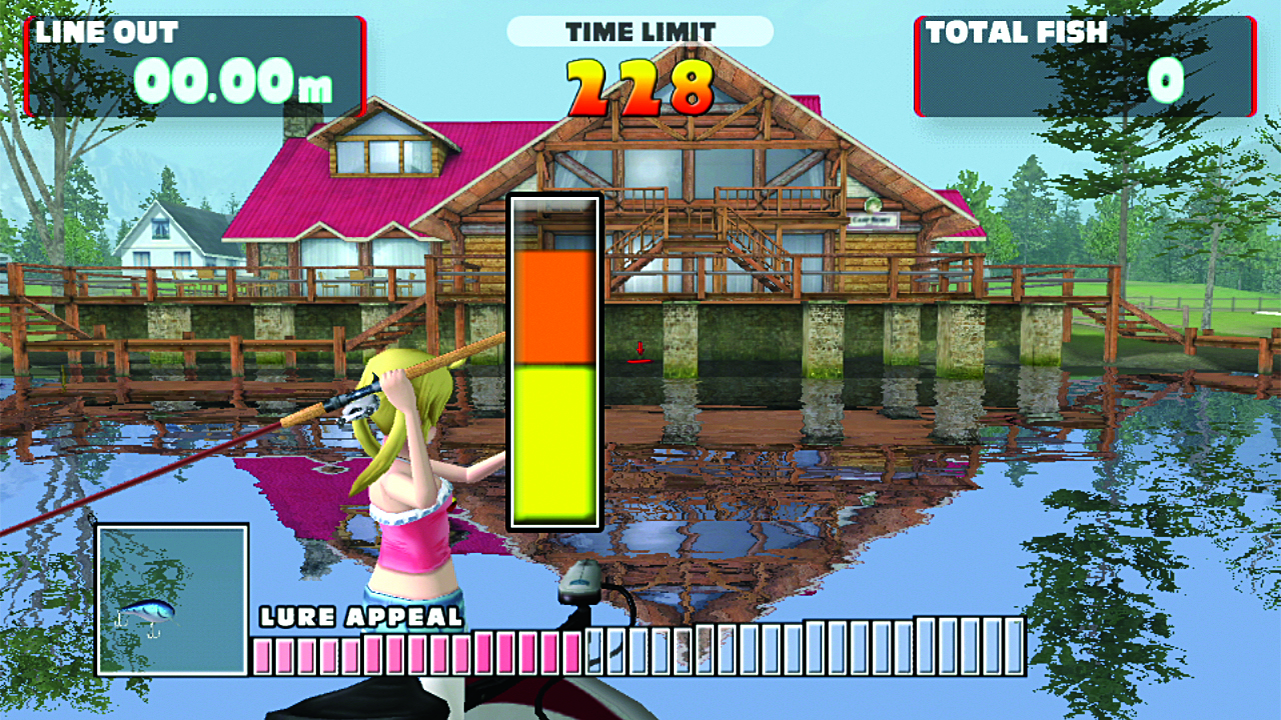 Gameplay utilizes either touchscreen or button controls, with touch controls rendered largely disposable due to complete inanity. The face buttons do a fine job controlling the game, which is relatively simple for its genre. Pressing circle brings up a cast gauge which goes up and down and must be stopped by pressing the button again depending on the desired distance. After casting, the line is reeled in either with circle for speed or x for more control. Fishes are attracted by a lot of movement from the lure and open their mouths and quickly approach it to bite on. Once they’re hooked on (there’s a pun here I’m missing), action is controlled by holding circle while a prompt to move the analog stick or d pad a certain direction pops up every few seconds. If this prompt is done incorrectly, the fish will break free from the line and avoid plaque-mounting another day. Do them correct, however, and the fish is brought on the boat (cheaply represented by a brief white screen) and caught.

While simple and entertaining in short bursts, the rudimentary gameplay can get old quickly. As every mode is just reeling in fishes, there’s a point a few hours in where you’ll question the point of continuing on. While the real activity and a few choice entries in the genre can be cathartic, Let’s Fish! is often frustrating. The fish seem to have a mind of their own and can swim away from perfect casts, but instantly latch on to mediocre ones. Getting them to bite is just as finicky, as sometimes the animation for doing so will begin only for them to overshoot it by an inch and never come back. Granted, fish are stupid, but what kind of an animal overshoots its target and gives up? The uncertainty of it takes away a lot of the appeal from the simple gameplay. 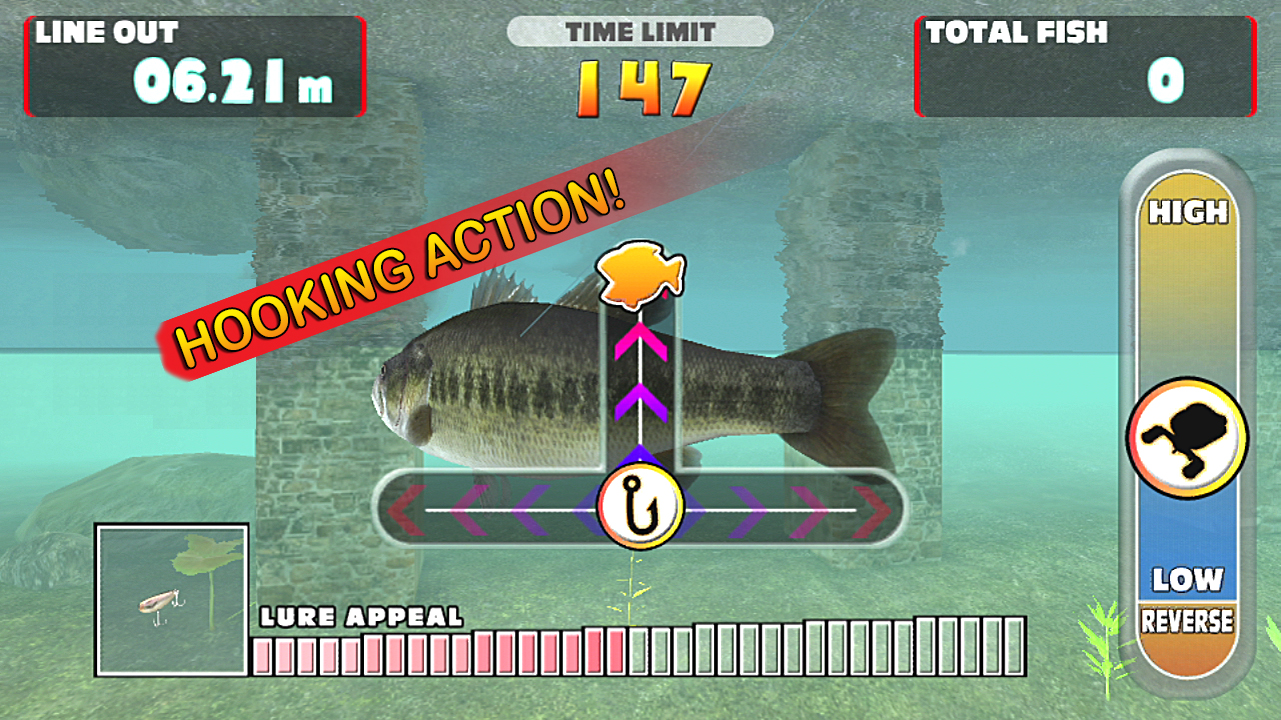 While the Vita is not in dire need of fishing titles, it is of addictive ones, which is exactly what Let’s Fish! Hooked On should be. Unfortunately, it’s a rather humdrum experience that is passable at best and frustrating at worst. The gameplay tires quickly enough that many will find it challenging to get even twenty dollars worth of enjoyment from it. It’s not advanced enough to be a fishing simulator, but not entertaining enough to be disposable arcade fun, rendering it an exercise in futility. Those devoted to the genre with a lot of patience may enjoy its meaty campaign, but anyone else would be better off buying one of the many superior entires in the Rapala series.