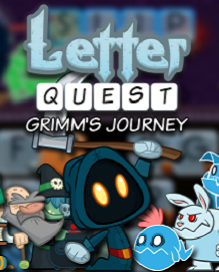 The move from mobile to PC is generally one of groans and grunts from the gaming community. It’s not so much that the games are bad, but more that you’re taking a game that’s normally for non-gamers and trying to pitch it to the dedicated gaming crowd. Games like Cut the Rope and Angry Birds aren’t typically well-regarded by the people who constantly browse Steam for indie gems or AAA behemoths. So Bacon Bandit’s Letter Quest: Grimm’s Journey has its odds up against it as a mobile-turned-PC game. With words as your weapon of choice, it looks as casual as can be, but Letter Quest: Grimm’s Journey is more than meets the eye.

Letter Quest: Grimm’s Journey follows the comical adventure of young reaper Grimm who is simply out to make cash and eat pizza. Along the way, he enlists the support of young female reaper Rose, and the two are out to collect treasure and defeat dastardly ghouls around their ghostly realm. A simple story? Absolutely, but it’s boosted by a great amount of visual charm. Grimm and Rose are downright adorable and their victory poses are sure to make you crack a smile. The presentation in general drips with cartoony appeal, from the various enemy designs to the witty descriptions of each monster. The sound design is chock full of catchy themes, and while some tracks tend to overstay their welcome, they’ll keep you entertaining with their upbeat, almost retro-inspired melodies. It’s nothing complex or inventive, but Letter Quest: Grimm’s Journey is a charming game that constantly invites you in with its presentation.

Grimm and Rose’s main weapons are not swords or spells, but letters. Yes, Letter Quest: Grimm’s Journey is a word game. Using the letters on screen, players must spell out words to earn points and deliver damage to enemies. Taking cues from classic word games like Scrabble and Boggle, the longer the word or the more uncommon the letters used, the better the damage dealt. Defeat enemies to get treasure, which can be spent on power-ups or upgrades. This all sounds incredibly focused on a more casual gaming audience, but Letter Quest is relentlessly addictive. Your typical trek through a stage can last under five minutes, so the game is digestible in small doses, but good luck pulling yourself away from it. It’s very easy to spend hours simply slashing at enemies with your vocabulary. While this digestible nature is more suited for portable or mobile gaming (Letter Quest was originally designed for iOS and Android, mind you), the PC version is still addictive in its quirky challenge. You even get keyboard support on Steam, allowing you to type your words instead of clicking on tiles. 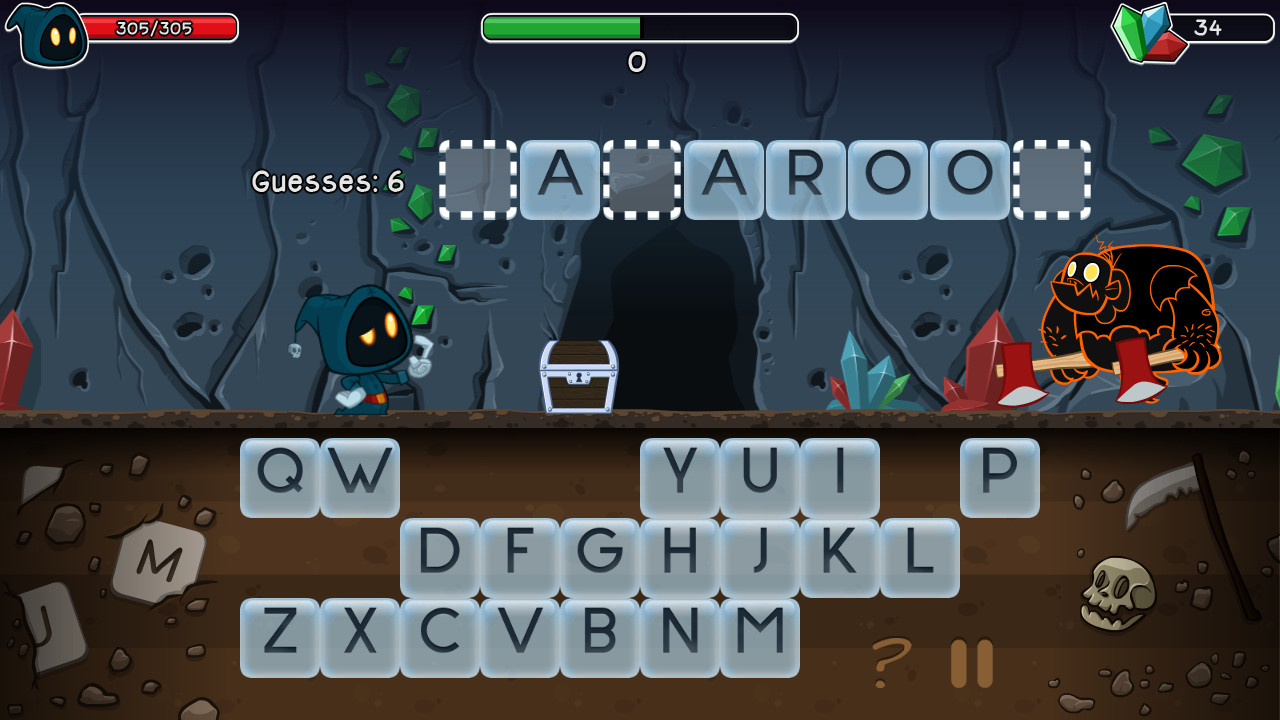 Letter Quest: Grimm’s Journey does throw some curveballs into the mix as well. Different enemies can cause various effects with their attacks, like poisoning your letter tiles so using them causes damage to you or flipping them upside-down to make it more difficult to spell words under time limits. Some of these power-ups are great (like the plague effect, which not only lowers the scores of tiles, but their effect spreads to adjacent tiles if they’re not used), but there are just too many of these effects. Some are pointless, others feel like copies of others. Still, Letter Quest: Grimm’s Journey likes switching things up when you least expect it, keeping you on your toes at all times. And don’t think Letter Quest is bare-bones. Far from it; Letter Quest: Grimm’s Journey delivers on something that many other games of its kind lack: depth. Built around the basic spelling gameplay is a surprisingly robust RPG setup. Grimm and Rose can earn various items to help in battle, like healing potions or shield elixirs. You can also buy magic books which give you stat boosts or special abilities that level up with repeated use, along with new scythes which have their own effects. In addition to health boosts and other stat augmenters, Letter Quest is jam-packed with different variables to give your reaper an edge. It’s stunning to see such a robust package in what would otherwise be a “casual” game, but Letter Quest: Grimm’s Journey offers more than simple word games. Prepare to see a lot of surprises.

And it’s not a short game either. There is a ton of content in Letter Quest: Grimm’s Journey. Each stage has a basic challenge to earn a Star, but finishing that challenge offers new missions to earn more Stars for the stage. Some missions require you to complete the stage within a certain period of time, meaning you better be fast on the word-building. Others throw alternate conditions like increased enemy health or require you to spell words of a certain length or beginning with a certain letter. The last challenge is the Crystal Star, a super-hard challenge that could require some external grinding for proper preparation. And yes, Letter Quest will have you doing some grinding to build experience for skills and cash, but the main gameplay is so addictive and fun that you won’t mind. This all comes at the low price of $7.99 US, a paltry asking price for such a content-packed game. 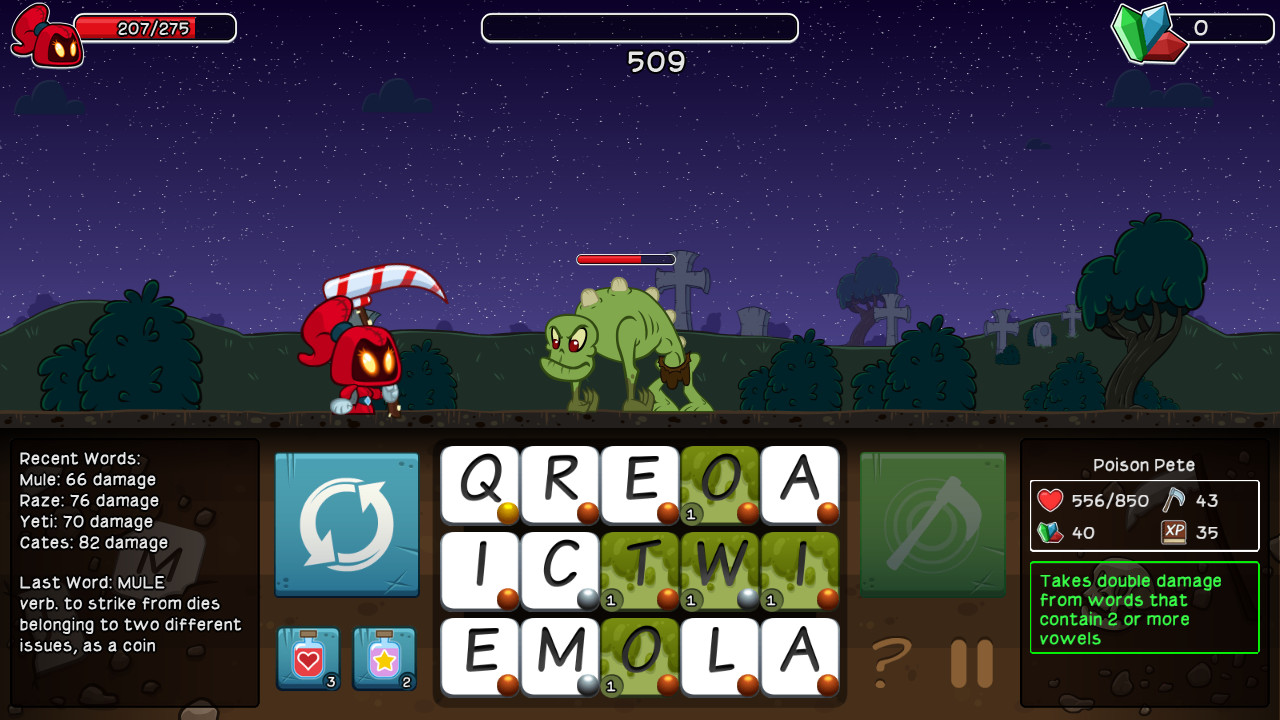 I’m extremely surprised at how much I enjoyed Letter Quest: Grimm’s Journey. It disguises its rich depth and ample modes with an accessible and addictive gameplay mechanic that’s inviting for both casual and hardcore gamers. It builds upon its accessible design with challenging stages and exciting switch-ups from the typical gameplay, keeping players guessing and delivering an unpredictable, but enticing design. The huge amount of in-game variables could be deemed excessive, but those who give Grimm’s Journey a go will find one of the most pleasant surprises on Steam. Don’t let the letter tiles and cute characters fool you: Letter Quest: Grimm’s Journey is an addictive experience that will steal hours of your gaming time without you even noticing.