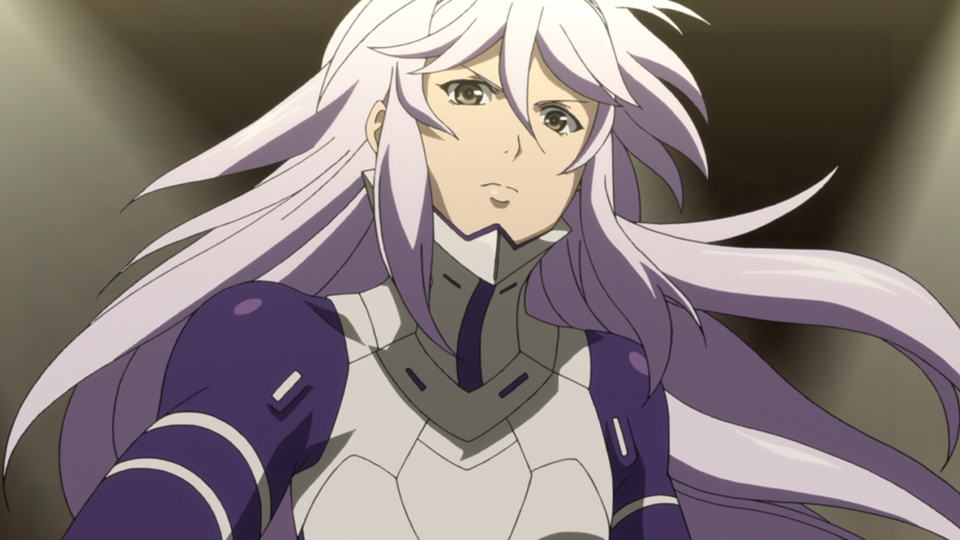 Suda51 has created some strange games in the past. Killer 7, No More Heroes, Shadows of the Damned, and most recently Lollipop Chainsaw were all quite bizarre in either concept, execution, or both. Liberation Maiden, a game where President Shoko seeks to protect and take back New Japan (the fictional place, not the pro wrestling company) by PILOTING A MECH and shooting things, comes off as fairly normal by comparison. She’s a novice ruler, but a veteran with mechs, so that makes her the obvious choice to do this instead of letting her rule New Japan and I don’t know, perhaps teaching someone else, someone NOT THE RULER OF THE COUNTRY SHE’S TRYING TO SAVE to pilot the mech. I guess she’s just really hands-on – she’ll approve some messages, and make any she doesn’t like violently explode via gunfire. 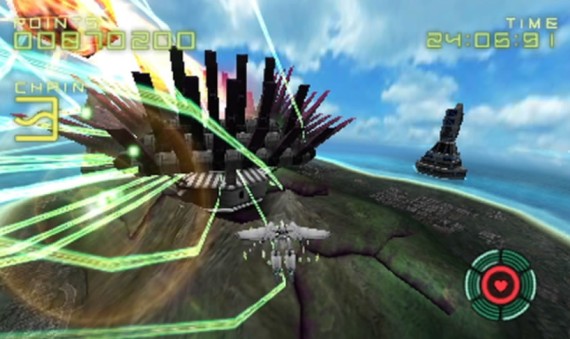 Shooting stuff doesn’t just come in handy against campaign materials though – it’s really helpful in LM against enemy missiles, crafts, and giant mushroom-shaped spikes. Those are your primary enemy and can shoot missiles out of them, and also have a variety of forms, including giant boss ones that have shields you need to maneuver around and fire off tons of missiles at a moment’s notice. LM is an on-rails with anime cutscenes, music, and voice acting mixed in quite well. The cutscenes explain the backstory as well as could be expected given how silly it is, while the music is a bit wacky but fits the fast pace of the action, and the voice work helps explain just what you’re doing and how to do it. Moving around in any of your mechs is done with the analog nub, while strafing is done with L and the lower screen allows you to move the reticle around and/or spin the mech via tons of circular motions on the screen to destroy the large mushroom-shaped bos spikes. I’d definitely recommend using a screen protector of some sort when playing this unless you plan to just wipe the screen down carefully after every play session. The controls are nice and simple, and a welcome change of pace for a 3DS on-rails shooter after trying to control Kid Icarus Uprising with one of five billion options. Here, you get one control option and it works flawlessly.

Thank God it does too because this is a challenging game – not frustratingly so unless you ramp up the difficulty, but challenging. There’s a trade-off to combat that adds a strategy to the game. You can shoot whatever you want by just tapping the screen over and over, however, doing that will drain your shield. So while you’re able to take out missiles coming at you, you’re also taking the chance at leaving yourself wide open. You also have the option to drag the stylus along your targets, charging your attack in the process, then moving the stylus off the screen and attacking your foes. This takes more time, but allows you to hit multiple targets at once while also doing a lot more damage if you focus on one enemy. While it still leaves you open for a second, it conserves your shields and lets you take more damage as a result. There’s definitely a right time to just start shooting things, like when you’re surrounded and just to find a way out by any means necessary. There, you’ve already resigned yourself to death, so why not at least try something to avoid it? However, the best strategy most of the time is to charge up your attacks then hit multiple targets at once. The risk/reward system is simple to understand, and allows you to take breaks from the game without being concerned about forgetting something and then dying a lot as a result. 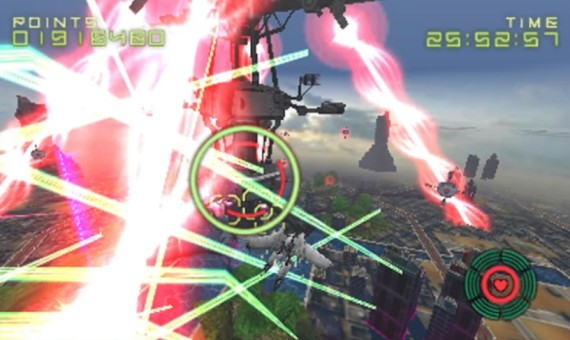 Liberation Maiden is one of the best-looking eShop games I’ve seen. The cutscene animation is about what one would expect from an anime TV show, and that’s quite a step up from what I was expecting for a downloadable game. The in-game graphics are impressive, with a lot of things going on at once and fairly good 3D models used for everything. They aren’t jaw-dropping, but LM’s pace is so fast it’s hard to notice many flaws. I love the little things, like clouds fading in and out that get across just how high in the air you are in the mech. There’s an impressive sense of scale here too since the mech looks tiny compared to boss spikes, but looks fairly big compared to the ships and subs you shoot. LM is a great-looking game overall, even if screens show things like pixallated environments – you don’t notice that issue in the game itself, so I can’t knock it for that.

The music is just awesome balls-out rock and it fits the action perfectly. There’s no greater soundtrack for a game with tons of things being blown up in rapid succession than loud rock with fast lyrics that don’t really make sense when you hear them. That’s a good thing though since it adds to the chaos, which strangely works in the game’s favor. Everything being crazy makes it easier to get yourself into the mindset to blast everything in the most efficient manner possible. I really love the soundtrack, even though the music does tend to blend together into a samey style, it works. I hope the OST is made available on iTunes or something like that because it’s definitely worth paying for.

Liberation Maiden is an outstanding on-rails shooter worth its $8 price tag. They money gets you only a handful of levels, but they’re very replayable thanks to the game itself just being a lot of fun to play,  variable difficulties adding challenge, and a score attack mode giving you a reason to want to play them over and over. Online leaderboards would help, but for such a low-priced download, I’m not too disappointed by them not being included. The core game is very well-crafted and has addictive gameplay mixed in with some impressive graphics that never suffer slowdown and a rocking soundtrack. If you like on-rail shooters, snatch this up as soon as you can.