I don’t know too many kids. Thankfully, too, because with my recent Nintendo eShop history, I’m well on my way to becoming a prime suspect for various Amber Alerts. You see, my library is littered with games of the “Petz” and “Barbiez” variety. Games that, despite my lowest of expectations, always end up disappointing me greatly. The thing is, I understand that I’m not part of the target demographic, but truthfully, neither are little kids. There is no demographic for terrible games, and unfortunately for children, most games tailored to their level of ability are awful. Don’t get me wrong, designing the most “perfectest dress” or “cutiest kitty” can’t be easy for an adult with any semblance of self-pride, but putting a child through a game like Life with Horses 3D should be considered a low-form of child abuse. I’ll explain why.

Let’s begin with the “Story Mode,” which is less of a narrative and more of a banal-task dispenser. You’re a young woman that just inherited the ramshackle family ranch. Naturally, breed bears no significance, and instead you’re to choose only a color and name for your horse. With that said, the available names are dreadful. They range from crap like “Ice Baby,” to the more morning-shift stripper sounding “Pinky,” and play absolutely no role in the game. Would it have been too much to allow players to choose their own names, rather than provide a list of trashy part-time dancer titles? I don’t think so.

More importantly, the actual “story” part of the Story Mode is the laziest, least story-like series of events ever programmed. The only surprise is that the developer didn’t make the goal to return the farm to its once prestigious prime. Oh wait, that’s exactly what they did, and that’s exactly what your goal is. The problem is, your rotten family really handed you a tumbledown stable, and there’s quite a load of work to be done. Whatever “glory” this farm once possessed had likely washed away with racial segregation and competent bookkeeping, because it’s a piece of s***. 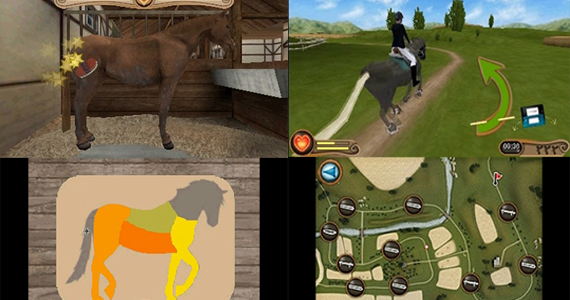 As I’ve mentioned, the Story Mode essentially involves completing repetitive tasks — the type that don’t really seem like they would somehow lead to the expansion of your ranch, or improvement of your buildings. And also the type that are about as enjoyable as swallowing a handful of agricultural lime. Expectedly, these tasks are all horse related, and often involve grooming, feeding and everything in between. Unfortunately, the developers steered from realism and excluded stallion semen extraction. There’s always hoping it’s included in a sequel, however.

While some duties are more interactive than others, such as brushing the horse — which involves the stylus and a bunch of tedious motions — the most challenging thing about the tasks is staying awake while performing them. Fortunately, the developers anticipated this boredom and included the option to skip through them entirely using Play Coins. If that’s not an indication that this game is terrible, I don’t know what the hell is. Essentially, the developer presents the notion that physical activity (rewarded with those precious Play Coins) is a good alternative. That’s worrying.

Sadly, tasks that progress the story cannot be skipped, which is strange because they’re possibly even more terrible than the other, less meaningful tasks. For example, massaging your horse — which for some reason is part of the “story” — is about as appealing as it sounds. Yes, it utilizes some of the 3DSs neatest features, but it does so in some unfortunate ways. There’s simply no instance where poking or tilting  a screen is fun if what’s being displayed is dreadfully boring. 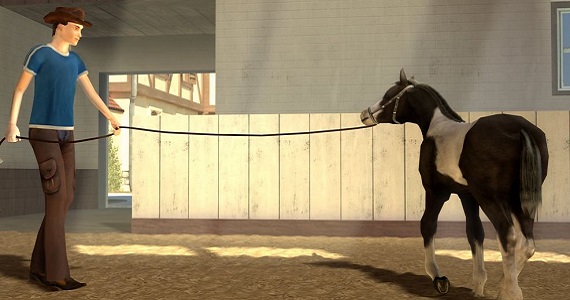 Throughout the game, you’re able to purchase land and renovate buildings on the ranch. And by “able to” I mean “forced to,” because doing so unlocks more activities in the Main Story mode which are required to complete the game. Unfortunately, it unlocks virtually nothing else. Well, except for feelings of anger that’ll leave you tapping the screen with your stylus in vexation. The problem with this system is that, any remote feeling of progression you may experience is entirely shattered once you realize that you’re repeating terrible tasks in order to unlock more terrible tasks to repeat yet again. Eventually, it became a lot like ingesting Ambien, only to immediately regurgitate it. Boring, sickly, boring, sickly – you get the picture.

Additionally, the renovated buildings offer no extra or ancillary activities outside of story tasks. The few customization options are bare-bones, as well. Racing for example — another major part of owning this confusingly scattered and economically dumb horse ranch — is probably the easiest aspect of Life with Horses 3D. Fortunately, they’ve nailed the realism, as you’ll be dodging static obstacles and tilting your 3DS when prompted during sharp turns, just like in real horse races. Sounds exciting, right? Wrong. The prompts appear early enough that failure would literally have to be your goal in order to miss them. There’s no sense of accomplishment, because losing would be enough to have your portfolio mailed to NAMI.

Honestly, the only somewhat redeeming quality of Life with Horses 3D is that it isn’t entirely horrible in the looks department. The horse models are fairly nice, suffering from only mildly stiff animations, and the backdrop — especially during races — is pretty, boasting bright-green grassy fields and blue skies. Character models on the other hand feature blank, expressionless faces that I like to refer to as the “Grady Daughter Countenance.” It’s quite horrifying, actually. However, despite it’s visual appeal there’s nothing worth seeing — even fully developed ranches are empty, without a trace of interesting anything. 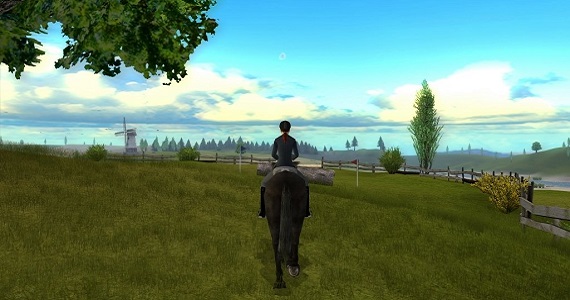 The bottom line is that this game doesn’t belong in the hands of children, but rather in place of shock therapy at an institute for the mentally insane. At least its mind-numbing repetitiveness can be used to bore crazies back to normal. Another more beneficial use would be as a form of punishment; kids throwing a tantrum? Nothing ten minutes with Life with Horses 3D can’t fix. As an expert on children’s games, heed the following warnings: 1) this game is guaranteed to lower the IQ of any ordinary child by ten points per hour spent in-game, 2) if you’re an adult, the only challenge is stopping yourself from registering on the sex offenders website for even installing the game on your 3DS, and 3) this game will bring nothing but evil to your home.