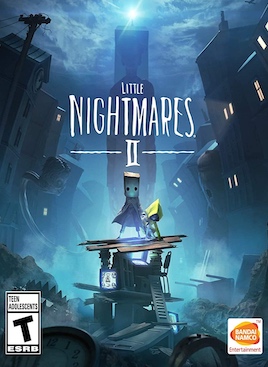 It might all come down to taste and subjectivity, but Tarsier Studios know exactly what makes horror an ironically-inviting genre to tackle still, both as creators and consumers. More often than not, the best kind of horror isn’t necessarily the most vulgar or the the most graphic. It’s certainly not one that needs concessive build-up and pay-off every waking moment. Silence, silence, silence, BANG! It’s often the more suggestive of moments that works wonders. The kind whose scares intentionally prey on our vulnerabilities, suspicions and deductions. We don’t want to venture into this area or that room…but we know we have to. There’s a discomforting sound off in that direction and we’re running head-first towards it, because there’s no other way to progress further on. Great as horror might be when it plays this more interrogative, psychological role in an audience’s mind, it’s greater still when the visuals accompanying it reminisce on such subconscious abstraction. Particularly our younger distortions of what we, as kids, believed the big bad world to truly be like. Long before reality has found time to catch up and drag us back to normality.

It’s thanks to its exaggerated grotesquery, stop-motion styled nod to the pseudo-likeness of old kids’ shows. And above all else, that focus on a small, child-like protagonist wandering through oversized surroundings (dealing with the horrors they contain and invite) where the original Little Nightmares found its appeal. Even in a sub-genre as typically-framed as this, where lost children wandering about an unsettling world is par the course. To find an artistic direction and means of delivery that could stand taller than its initial puzzle-platforming premise was one thing, but it was Tarsier’s understanding of how horror works emotionally that gave the studio’s 2017 work such impact and believability.

Four years later and Little Nightmares II takes things away from the iron-clad bowels of The Maw and into a similarly (if not more so) unsettling city of contorted folk, decrepit interiors and truly great sound design that makes you appreciate each unsettling timbre as a new ghastly presence eventually emerges. An over-abundance of unpaired shoes and old-fashioned TV sets a plenty. The game might still be a shorter trek than some may suspect and while there’s more here that feels familiar than entirely new, Tarsier Studios have, if nothing else, refined their craft in the sequel. So let’s start with sound design then; in a game whose soundtrack is relatively sparse for its brief five-to-six hour run-time, ambience and the reliance on non-musical accompaniment becomes evermore critical to get right. But boy does Little Nightmares II deliver where and when it matters. Each wet sliver of what you assume is flesh, or crack and snapping of what you’re never sure is bone or something else entirely. There’s a surprising amount of care and dedication into making sure these sounds are as gruesome as you make them. 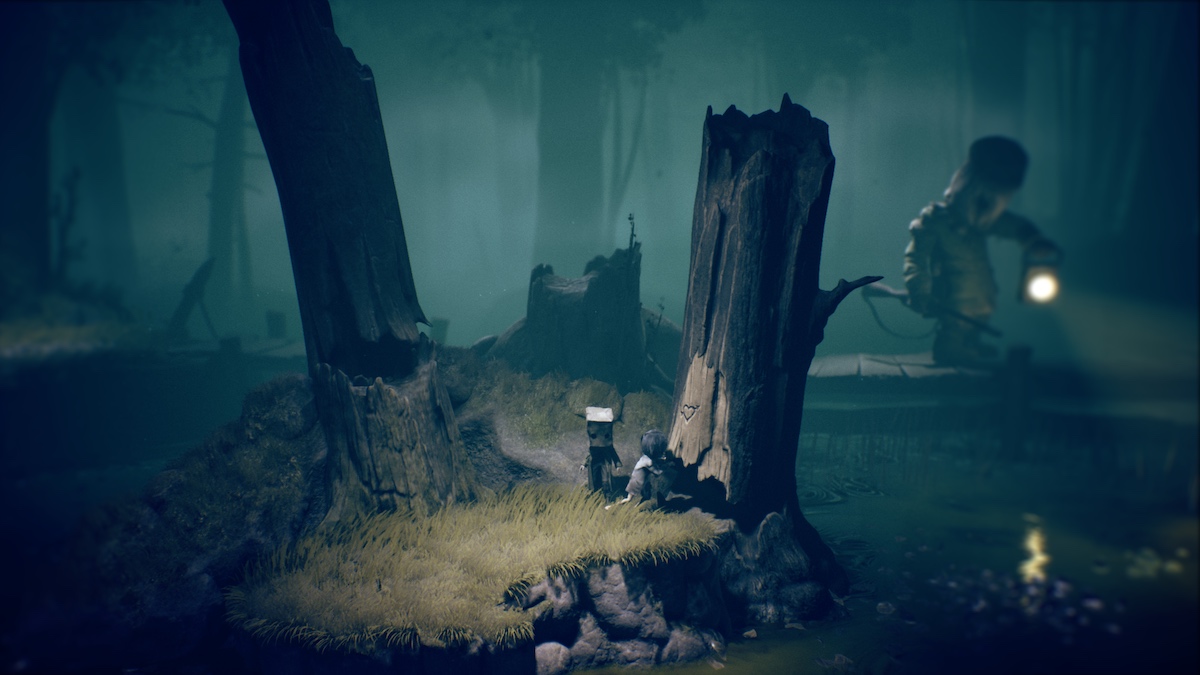 It’s that intentional preying on our own imagination where the sequel draws its influence to make such moments of build-up more effective. A self-propelled feeling of anxiety that is/isn’t aided by its creature design first and foremost. Towering husks that “somewhat” resemble humans and at worse are nothing short of Frankenstein-esque. Even during such spectacle or signatory chase scenes alike — when it’s evident the body-horror antics are all for show — Little Nightmares II still guesses correctly that the extremity of such visuals aren’t everything. All of which takes place in a game that, beyond such personal fantasizing, lacks any real gore or blood or anything resembling blatant violence, player-death or otherwise. Straightforward and easy to work out some of its puzzle segments are — not least when you’re attempting to avoid being detected — the 3D space is well-utilized to heighten the greater unsettling atmosphere that writhes through the game like some parasitic infection. Stealthily moving about a room in the foreground, as background threats loom. Then that convention is sometimes flipped — your character moving closer to the back as the aforementioned, towering creatures make patrolling routes in the foreground.

Take away all the talk about atmosphere and character design for a second however and you’re still left with a game that manages to strike a balance between fair and challenging. For every puzzle or conundrum that’s blatantly obvious in what you have to do, there are just as many scenarios that require a little more deductive thinking. Even those whose routes in/out aren’t exactly revealed at first glance — scenarios that, understandably, may even land you with a few deaths before you eventually catch on. One of the more mechanical differences this time round is the introduction of new character Mono to the fold. Two characters, outside of an occasional moment of separation — be it story-based or simply having you figure something out by yourself — where player-controlled Mono and AI-led Six (when co-op isn’t your preferred play-style here) accompany one another on their travels. Mono will automatically hint at when it’s time to split up, via offering a boost to an impossible-to-reach platform or hole in the wall, but Little Nightmares II does the smart thing in not giving too much away. 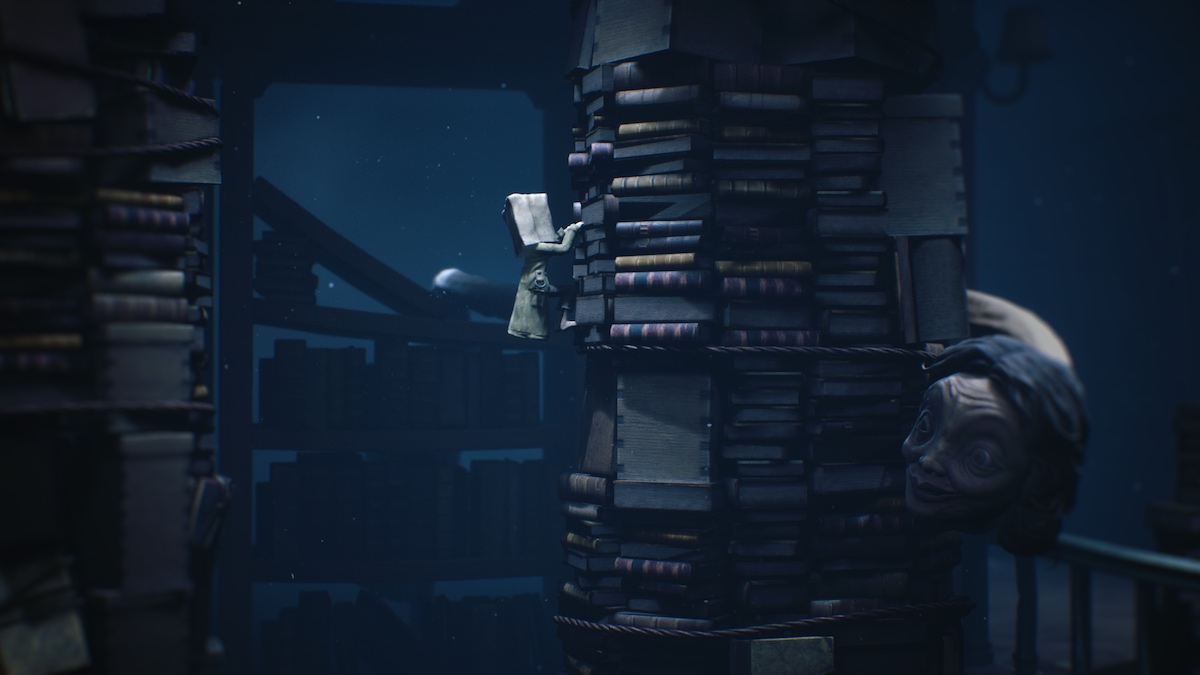 It’s more credit to the overall layout and design of Little Nightmares II as a puzzle-platformer more so, rather than any back-end AI work. The game doesn’t always get such a layout correct, though. Issues surrounding depth perception and trying to work out just how far, or close, a fatal drop may be, will likely catch some out. But even as the potentially-problematic circumstances of “two characters” — one handled by the player, the other a supposed computer-controlled intelligence — is quickly rectified, all that does with a game such as this is further elevate the world, its near-oppressive and increasingly-desaturated environments, but most importantly, and this is going to sound unexpected, what attachment you may end up crafting for poor Mono and Six along the way.

I have to be truthful and confess that at almost every opportunity I was given to press the grab button — to have Mono and Six hold hands, when no interactive object (vital to solving a puzzle or not) was nearby — I took it. Regardless of the fact that there was no gameplay benefit or simple requirement for me to do so. A tap of the “cry” button too, to have Mono shout a carefully-whispered “hey!” to his companion, was never too far away either. Little Nightmares II does an excellent job at drawing you into the madness of its surroundings. Much like the original, it’s near-devoid of direct storytelling — there’s little rhyme or reason to the way things are. And as that may be emblematic of its affiliation to that same child-like distortion on things, it gives those moments of shock and discomfort even more weight. It’s nothing less than a benefit on the game’s behalf when despite a lack of plot-heavy events, you have to stop yourself from revealing too much of what Little Nightmares II has you take part in. Without spoiling any of the weirder moments, let’s just say you’re bound to usher a wide-eyed “oh…THAT happened!” 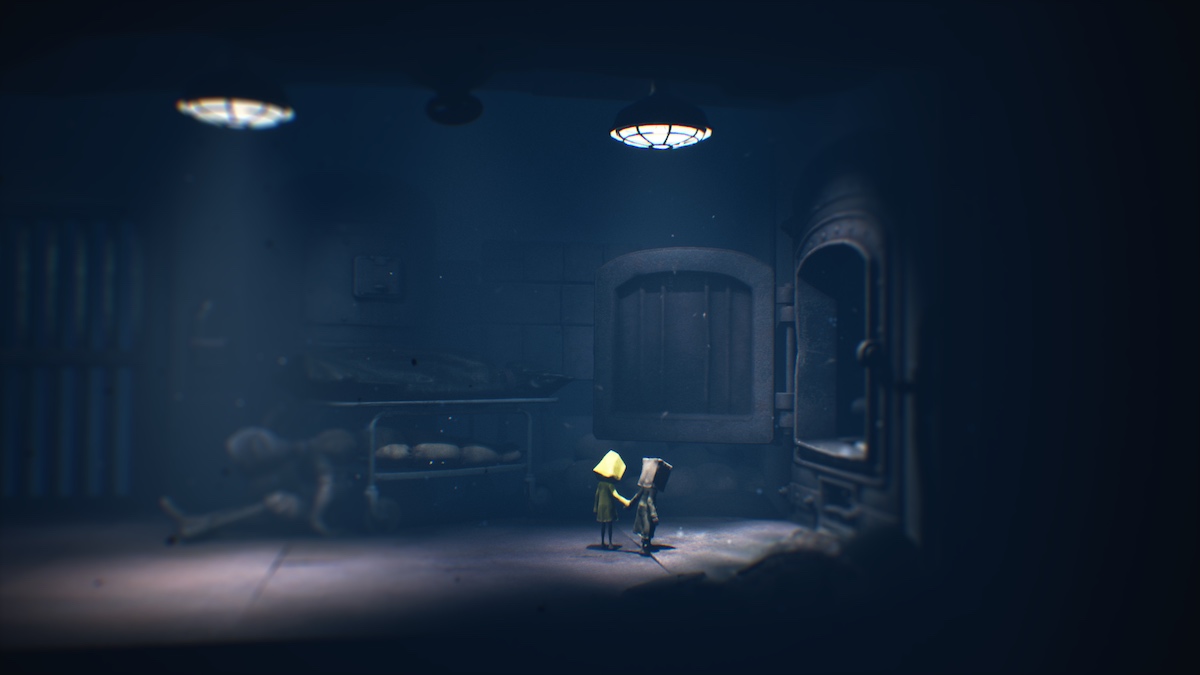 Naturally, the game would be nothing without its moments of quiet reflection alongside and fortunately, Tarsier make sure to space moments of tension with interlude-like stretches of calm, as misleading such silence may inevitably be. One moment early on is possibly the least well-hidden spot of loading new assets by the game’s back-end — to the point the draw of its aesthetic is tossed aside for some figurative tapping of a watch or clock. But for the most part Little Nightmares II does a good job at delivering such visuals and then having you reflect on such scenes. Not least when scenes are left to hang and stir — Six and Mono’s solitary presence the only thing to salvage any kind of emotional response. But even that restrained delivery from the two main characters is treated well here. It’s not deep or rich with activity, but there are moments (again, no spoilers as to the specific) where either character’s response, or lack there of, itself feels a touch off. Even in its closing chapter, when things start to take a turn for the surreal (even by the game’s own standards) and new abilities — a touch disappointing it is — feel once more like mere servants to some stand-alone spectacle.

Credit to Tarsier for at least sprinkling a little subversion at key moments. Not least fooling one into assuming things would wind up one way near the end, only to result in the exact opposite. Even if the subsequent scenes thereafter are met with far more questions than answers — a possible lead-in for a third instalment, though admittedly not as deserved as the game may think. At the very least, right up to its closing scenes, Little Nightmares II pushes its aesthetic towards even stranger and surreal circumstances, even if there’s a likelihood that the fifth-and-final act may not resonate or appease everyone. Another area that may get on the more irksome side are some of the controls at points. Minor a criticism this is, points in the game where dual-analog control is required — a moment involving pointing a torch in certain directions — can get too clumsy, especially given the nature of the set-piece and how quick movements are a necessity. 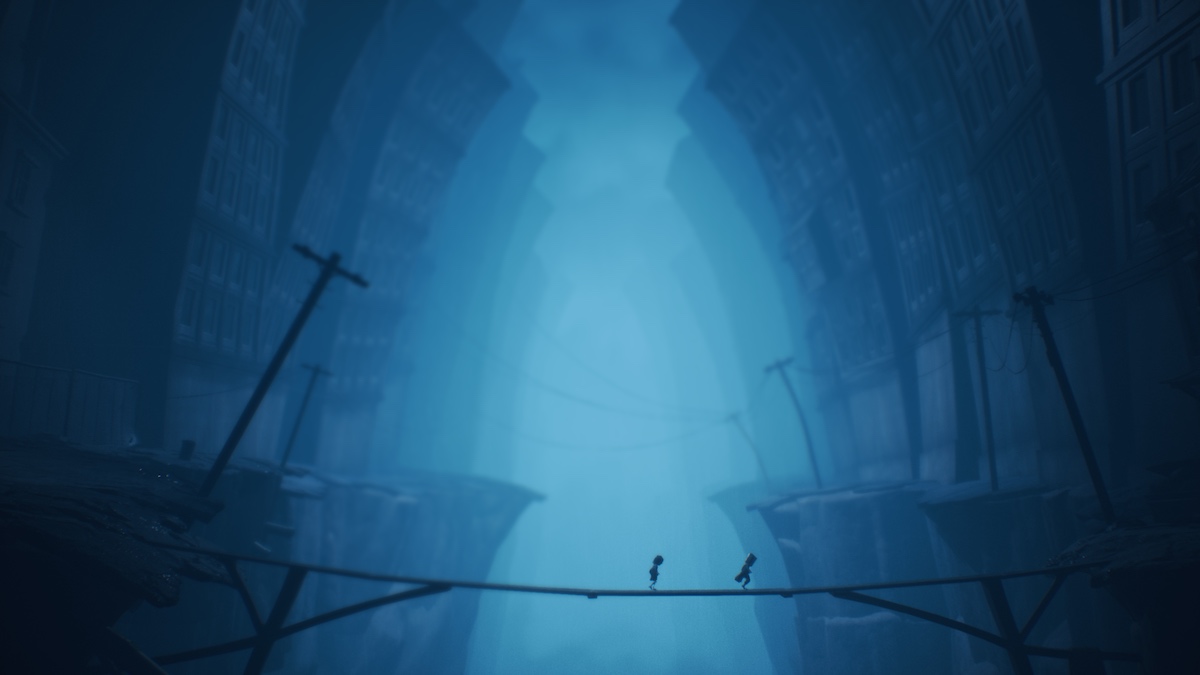 That same distortion and monstrous-like exaggeration of previous may be out in full force once again, but Little Nightmares II succeeds on its bolder and more refined continuation from the 2017 original. Stripped down to its most basic premise, the game still intrigues and invites through well-orchestrated puzzle segments and spots of subtlety that lend themselves to the creeping, anxious trek characters Six and Mono must make throughout the world. Certain spots of such unsettling weirdness may split some who maybe aren’t as into the more oblique form of world-building and reasoning as others. Even so, Tarsier Studios once again demonstrate a clear and clever understanding of horror’s more emotional, nostalgically-twisting strengths. Out-and-out scary it may not be, Little Nightmares II is one of the more well-crafted and remarkably-unsettling takes on the puzzle-platformer sub-genre.