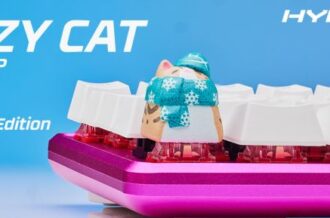 Logitech has offered popular racing wheels for the past twenty years. The G27 is one of the more heralded racing wheels of all time that didn’t require players to break the bank. During the current generation, the G29 and G920 offered excellent options for the price and some excellent force feedback that could be cranked up. Sim racing has changed since the release of those wheels, though. There’s more competition and more racing titles to experience. Logitech announced the next generation G923,and it was safe to say I was excited to see what it had to show. The end result, however, feels a bit lost in space.

If you’re familiar with the design and the look of the G29 and G920, you’ll be familiar here. The G923 doesn’t get an overhaul as it will still fall in the category of a mid-tier racing wheel. It’s far from a beginner wheel, but lacks the belt-driven design of the Fanatec. This is still a gear driven wheel with two motors. Going even one step further, the G923 includes the exact same hardware as the G29 and G920. Nothing is different. What is different is the advanced firmware that Logitech implemented to open up the TRUEFORCE technology. The team was able to apply and regulate more voltage to give a completely different feel to the wheel. I just feel like this was something that could have been added, but when TRUEFORCE is available to use, it’s a game changer.

Logitech has decided to black out the G923. Where the G29 and G923 had highlights of other colors, the G923 is purely black. The gear paddles have been coated in black instead of the pure aluminum they previously had. Dual Clutch controls for launch are available to use on certain titles, but I’ve been unable to get this added due to the limited library and lack of overall support at this point. The led rev indicators on the wheel offer different colors. The wheel, while being the same size as the G29 and G923, does get an upgrade with the leather quality. 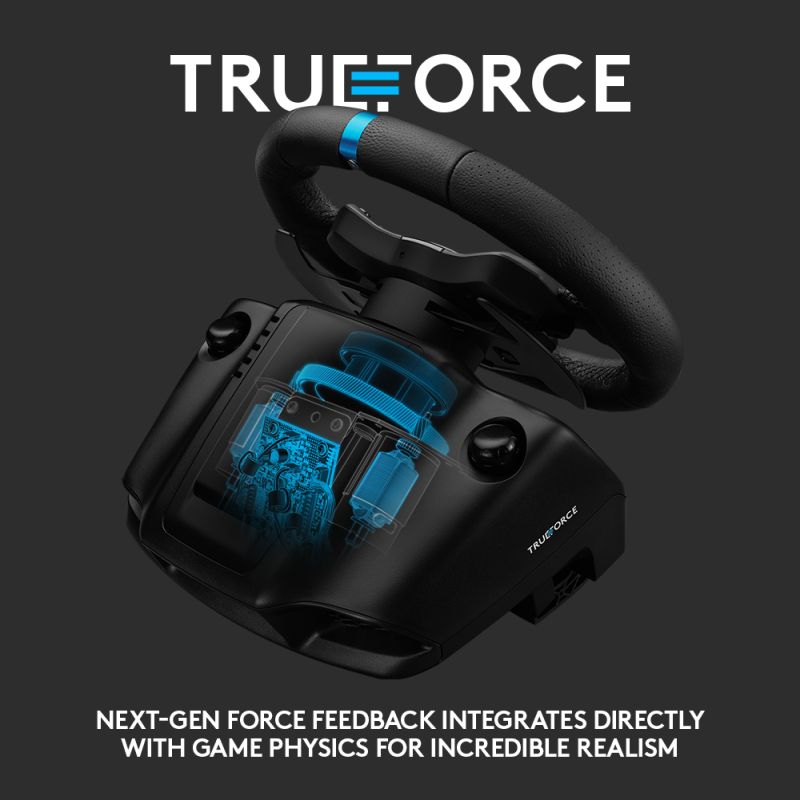 As for the TRUEFORCE itself, this technology is the big difference. Some titles like F1 2020 still recognize the wheel as a G29, meaning you’ll get that same time of force feedback from the previous wheel where it rocks like crazy. The wheel is much quieter in games that support the new force feedback. The counter-steering effect may be the best improved aspect of the force feedback as it’s strong and responsive. It can actually help you identify wheel spin if the car breaks loose. To further this, the way TRUEFORCE is implemented allows for not only creating the feedback of the tires on various surfaces, but it also incorporates g-forces and even the engine RPMs. Simply revving the engine on supported titles will bring a smooth rumble to the wheel. All of these aspects blend together and become difficult to differentiate when racing, but it makes the experience a much better one than the previous wheel.

The G923 also comes with pedals and is compatible with the previous shifter add-on.  The accelerator and clutch are the same, but the brake pedal might just be the best improvement to the G923. Many people have complained about the G29 and G923 brake pedal. There were even mods sold for it. This new setup includes brake pressure, which still does amount to a spring inside. But the execution is much better and gives a better sense of stopping power. 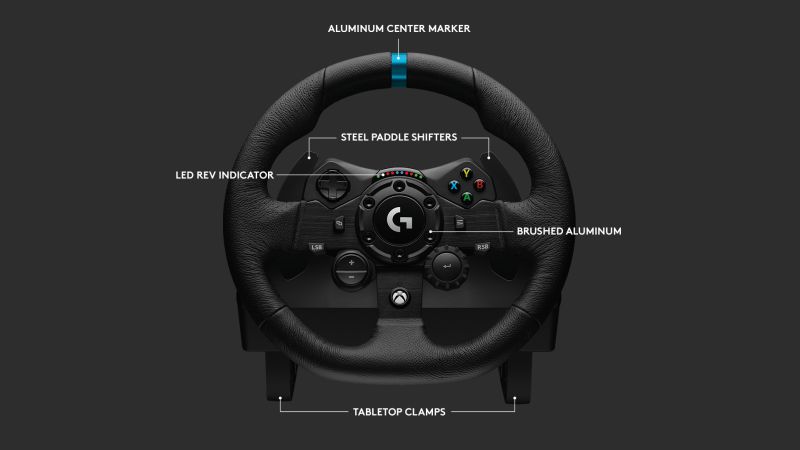 Currently, there are only three titles that support the TRUEFORCE technology. This kind of puts the G923 in a bind for its price point. I did try all three. Assetto Corsa Competizione is truly the best way to experience TRUEFORCE. The game makes the most out of the technology as you can feel the car shift from side to side especially around fast corners and every surface feels different. Running over curbs generates a different response. The rumble is much more smooth and consistent and accelerating the cars is accounted for, too. I couldn’t get the dual clutch setup properly on this, but it may be because I’m missing something. I feel this is the best immersive experience with the G923.

Even though the wheel isn’t listed in the options, Gran Turismo Sport also supports TRUEFORCE but not in as much detail. I couldn’t verify if the acceleration reaction on the wheel works, but you can experience the counter steering improvements and the weight transfers on the wheels. I felt more confident in handling the cars using the G923 than I did the previous wheel. I would say this is a noticeable upgrade, as well. GRID 2019 also supports TRUEFORCE, but I feel it’s the weakest of the three here. Maybe because the game isn’t a true simulation, but the aspects of the technology didn’t stick out as well. Thanks to the counter steer, I felt this was an improvement over the previous wheel. Acceleration response and force feedback from the tires on the road felt too light and that’s when I got responses. I also went back and did the original Project Cars and the feedback still felt akin to the G29. The counter steering felt more responsive, but it equated to the same experience as F1 2020. There are a long list of games the G923 supports, but there are a few missing. For instance, NASCAR HEAT 5 doesn’t recognize the wheel at all. So you’re taking a chance on specific titles not working. The Forza series is listed as compatible, but you won’t get the benefits of TRUEFORCE. Only three titles at this wheel’s launch supports it, which further hurts the asking price. Even less of these support the dual clutch function. 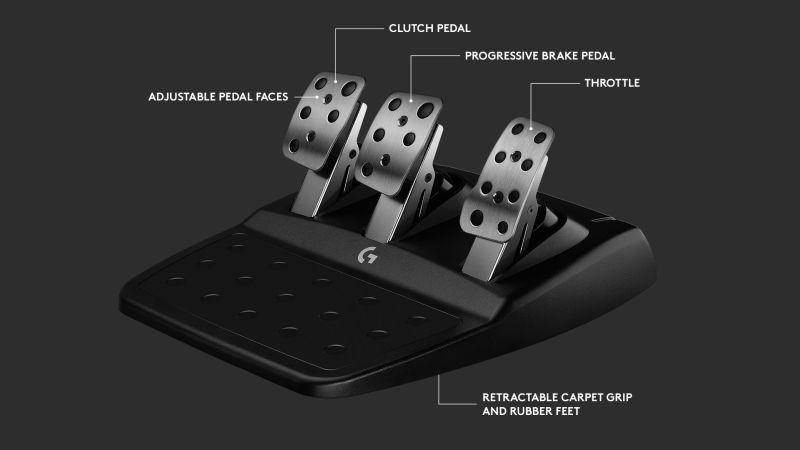 When TRUEFORCE is fully implemented and working, the Logitech G923 Sim Racing Wheel can show off what it’s made of. The brake pedal is an improvement in itself. Unfortunately there just isn’t enough here to justify it out of the box. I did enjoy Assetto Corsa Competizione, but for $400, I can’t recommend it for just two titles. The wheel is literally a G29 with some firmware changes. For another $200, you can grab a Fanatec wheel that’s belt driven. For those who currently have the G29 or G923, the asking price is too much to warrant an upgrade. More compatibility for games needs to be implemented, but that’s going to be on the developers. With the price point, the Logitech G923 is stuck between a rock and a hard place. The tech is there for a better immersive experience, but time is needed to fully enjoy this along with a price drop. It would be worth revisiting the wheel a year from now, as it’s compatible with next-gen consoles.