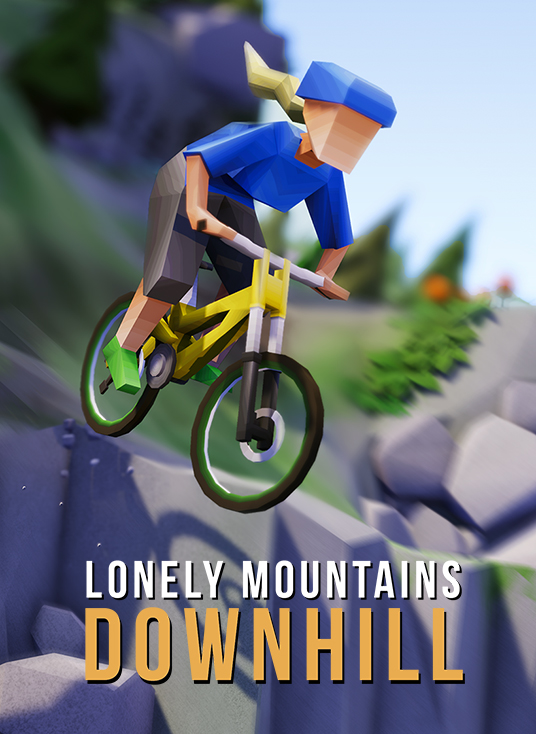 It’s hard to get away from everything.  No matter where you go someone has been there before, and even worse, may still be there now.  While too much solitude is unhealthy sometimes it’s necessary to escape the noise of the world, setting out into nature with only your own thoughts for company.  In Lonely Mountains: Downhill those thoughts are frequently “Oh god too fast corner corner brakes AAAHHH!!!” but the point is there’s nobody around to interrupt them.  Except for trees, rocks and the occasional jump off a hundred-foot cliff, or course.  Other than that, there’s nothing but the sound of the wind, the chirping of birds, and the gravely skid of tires breaking up the silence of the great outdoors.

Lonely Mountains: Downhill is a mountain biking game that captures the feel of its activity better than any other biking game out there.  While its courses take place on unquestionably videogame-ified versions of mountains, with huge gaps, massive drops and more incredible scenery than could reasonably be expected, anyone who’s done a little day-hiking will recognize the atmosphere as being properly moutain-ish.  Each of the four different mountains is criss-crossed with four trails each, plus multiple goals per trail that earn rewards for meeting them.  The bike itself controls easily, with accelerate, brake and a limited but always-recharging dash meter for putting on a burst of speed.  The starting bike is a balanced machine, combining speed and the ability to land from mid-sized drops in a single accessible package, but it’s worth noting that you’ll spend a lot of time with it before unlocking any of the others.

At the start there’s just the one course open, an easy run through six checkpoints down a fairly forgiving series of drops, switchbacks and the occasional jump.  Each trail has four different sets of goals to unlock, plus a couple more bonus goals once those are met.  The starting Explorer goal is exactly what the name implies, which is a run down the hill with no objective but to reach the bottom.  Poke around, don’t sweat crashing, get a feel for the terrain and find a few shortcuts.  It’s a low-pressure ride so you can practice the run, and then the Beginner goals require doing it again but better.  The two types of challenges involve getting to the bottom within a time limit and not crashing too much, and these range from fairly simple to massively difficult depending on requirements.  One of the Beginner rewards will always be to unlock the next trail, while others earns parts for different bikes, new bike colors and even new clothing options.  The Beginner goals are relatively easy to get, requiring only a bit of practice, and after that comes Expert.  These require either skill or bullheaded repetition to complete, and when done it unlocks Free Rider, which is a checkpoint-free trip from peak to base camp with no timer to pressure you into a bad decision.  And after that, of course, are the mystery bonus goals. 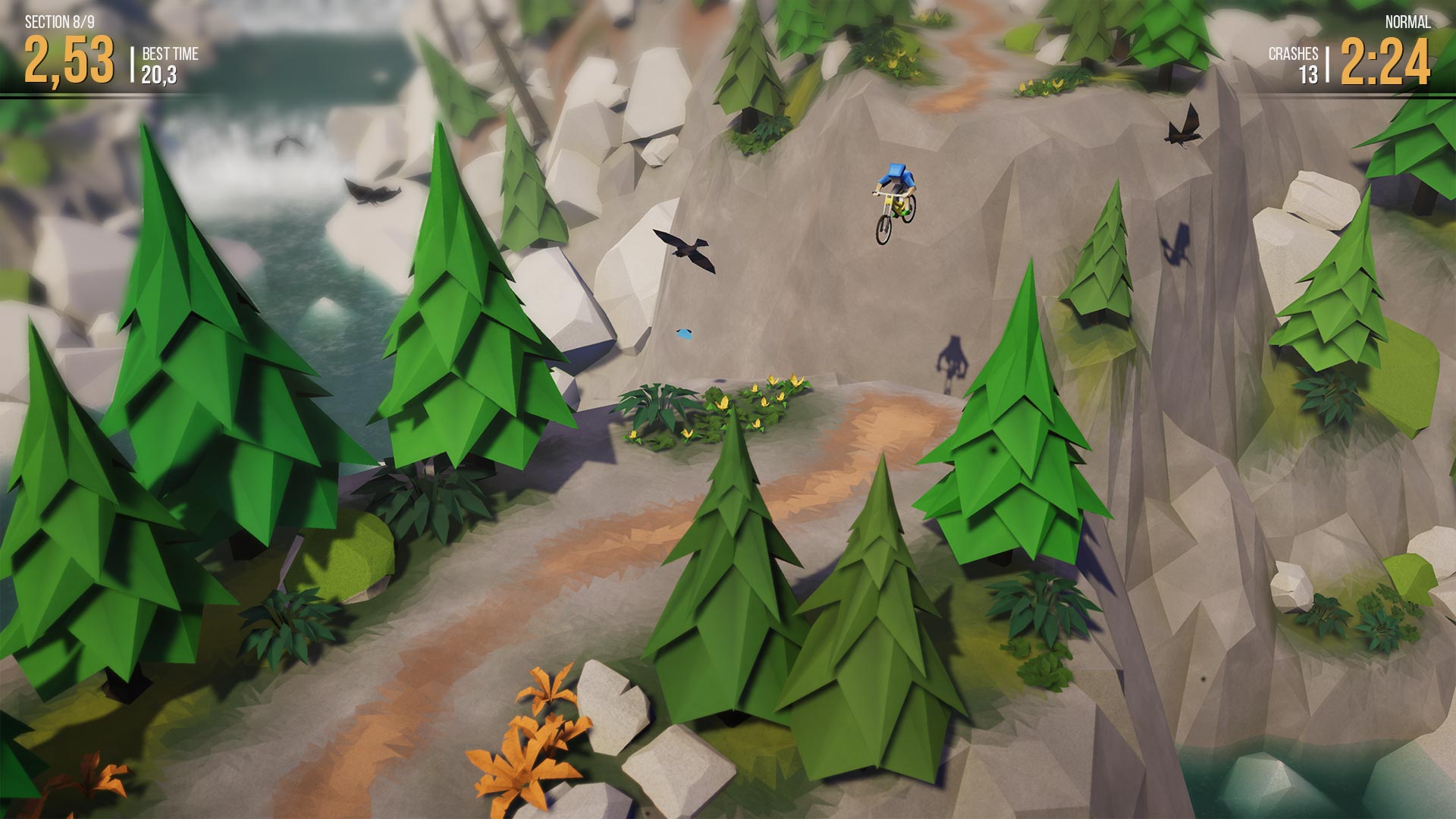 If that sounds like a lot of replay it’s because the sixteen courses of Lonely Mountains are designed to be thoroughly explored over multiple runs.  Each course has a clear, obvious trail down the mountain, taking you through steep drops, boulder fields, wooded areas, ponds and streams, and plenty more in the way of constantly changing scenery.  There are side paths all over the place and these range from blatantly obvious to very well hidden.  The viewpoint is fixed, with the camera traveling to give what’s generally a clear shot of the action, and this means that secret trails can be tucked behind rocky outcroppings or behind a stand of trees.  Some paths are incredibly useful for any run, but others require a specific type of bike to attempt.  The Trailblazer may not have a lot of speed behind it, and the sprint ability wears down much more quickly than on something like the zippy, fragile Javelin, but it can take a beating and not wipe out.  A massive drop is much more survivable with a decent suspension and some bulky tires, but if you’ve got the feather touch then it’s well worth trading dramatic jumps for tearing down the path at lightning speed.  Mountains are huge things, after all, and have plenty of room to play on the descent to home base.

This is what makes Lonely Mountains: Downhill such an incredibly playable game.  The course design is for the most part absolutely fantastic, with the occasional blind jump being the only thing to complain about.  No stretch of scenery lasts too long, whether it be the rocky top of the peak, a series of switchbacks highlighted by jumping in front of a waterfall or the orange rocky drops of the Sierra Rivera courses.  Even after learning the basic layout of a track it’s fun to go back to with a different bike, trying a route that simply wasn’t possible with the default ride.  The bike handling leaves plenty of room for technique, sprinting to the edge of a drop then braking at the last second so as not to take a short flight into the stratosphere before gravity reasserts itself, or figuring out just the right skid to barrel down a steep drop into a corner and power-sliding through it in exactly the way bikes aren’t designed to do.  The little moments and big set-pieces come together to create tracks that are just as much fun to play at top speed as they are to amble down and explore. 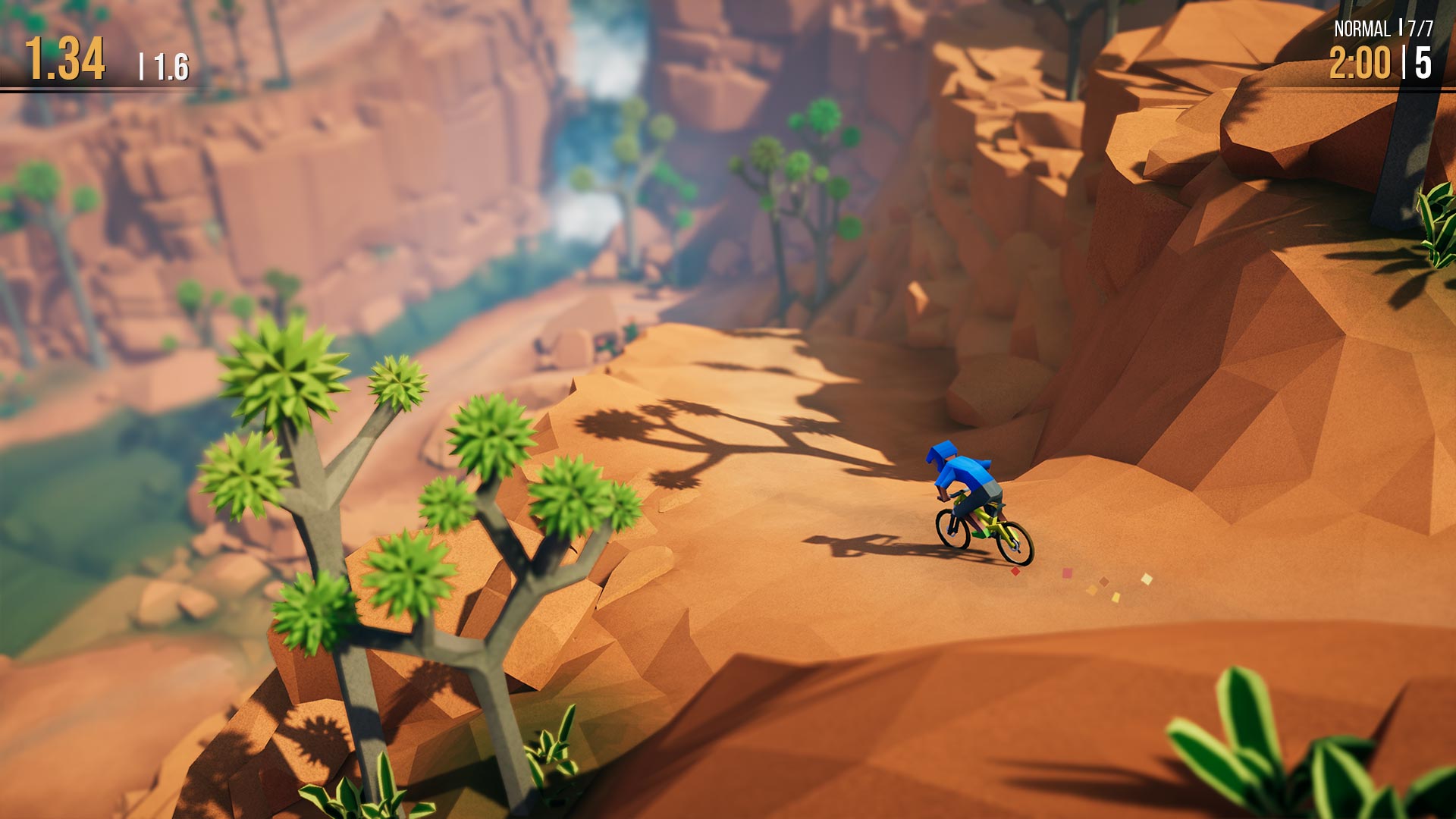 Lonely Mountains: Downhill is easily the best mountain biking game available.  True, there’s not a lot of competition, but even if there was it would be hard to top.  The terrain is a blast to explore, each bike opens up a different style of play and the atmosphere is about as close to perfect as you could hope for.  The progression system to unlock new bikes takes a bit too long, and sometimes the bike physics get a bit wonky, but it’s hard to let that get in the way when the next trail opens up or a new shortcut reveals a path that knocks several seconds off the clock.  The wilderness of Lonely Mountains: Downhill seems initially empty because there are no other people to be found, but they’d just get in the way of enjoying the peaceful serenity to be found in bouncing down the trail while holding on for dear life.