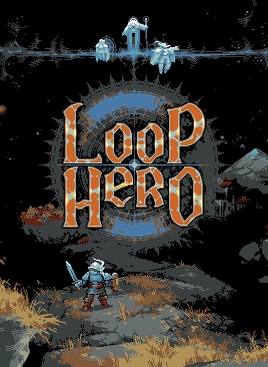 There’s no shortage of roguelikes, dungeon crawlers and deck-builders on the indie circuit, so it takes a lot to stand out among them. But Loop Hero, the latest game from Devolver Digital and developers Four Quarters, could potentially end up being the next big hit among the genre. It has already achieved a level of addictiveness met only by the true greats, having basically almost delayed this review because I was too busy playing it, wanting to dive in for one more run. That’s right, it’s the productivity killer of…um…

Wait…haven’t we already done this before?

Ah, sorry, I guess I ended up getting sucked into the world of Loop Hero so much that I’ve begun to experience my own time loops. Well, that and this illustrates the game’s central concept while allowing me to save on time. But also, if we’re being honest, Loop Hero makes for one of those rare instances where the preview version already contained so much of the game (having lasted for several hours), beautifully showcased its simple yet perfect mechanics, and has seemingly had little change in the past two months that doing a particularly lengthy review would basically just lead to me repeating myself. So I suppose you could just consider this a continuation of my experience with the game, which, spoilers, has still not stopped being addictive to the point where it can still kill my productivity.

So for those of you too busy to read the preview in the above link or just want a quick recap of the game’s premise, the Lich has completely thrown the world into a never-ending loop where time is meaningless and everything is in flux, which is kind of a bad thing. Our protagonist sets out to stop the Lich, but is hindered by the loops and finds themselves encountering the same path over and over. So it’s up to you to play cards that help build various pieces of this world, ones that can help them find remains of the past but that also bring new enemies to conquer. Basically, your goal is to set up a proper series of constants that they can hang on to despite memories being a fragile thing here, up until they can directly confront the Lich several loops later. 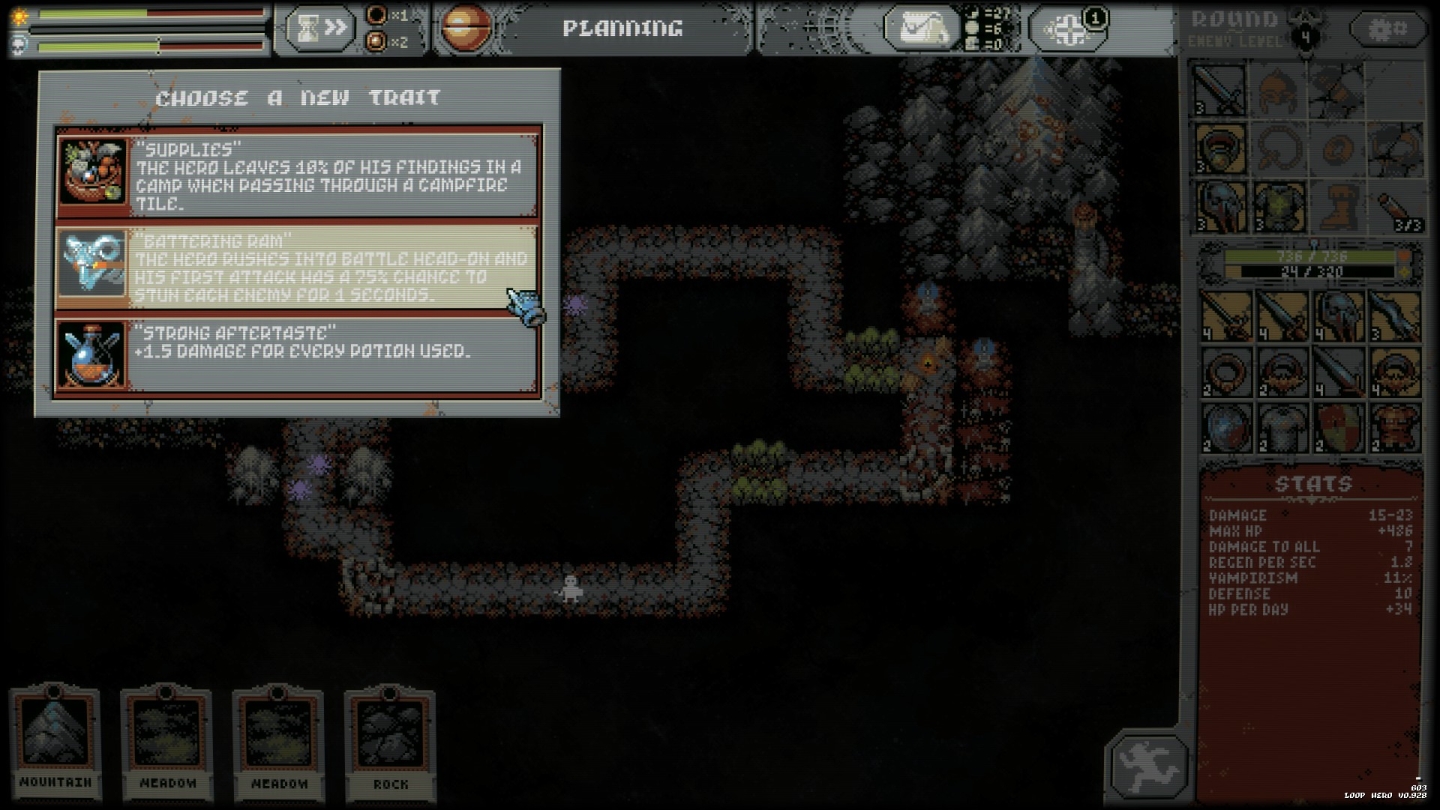 Loop Hero easily ends up being a massive time sink in the best way possible. Beyond that, what I realized with all of this time is that Loop Hero differs from a lot of similar roguelikes is that it shockingly doesn’t start you out with the mechanics that you’re used to, instead making you earn them. You know the typical encyclopedia you get in games such as this that details every enemy, item and whatnot that’s encountered? It was at least a good ten or so hours into the game before I was able to gather enough resources for additional buildings at the base camp in between runs until I reached the intel center that I could build.

That’s not the end of it, though. The ability to level up and earn traits for each run? Gotta craft the right building. Do you want to find relics with various buffs? Work on the branch that gets to the right building. It might sound tedious on paper, but not only is it executed perfectly in action, it’s actually genius when you think about it. The entire goal of the game, after all, involves starting from a point where the world has been stripped down to its mere basics, and then rebuild it part by part, fragment by fragment, building by building. That’s what you’re doing story-wise, and from a gameplay perspective, but going beyond that, Loop Hero sees Four Quarters doing this with the entire genre.

The beginning runs see the procedurally-generated roguelike and dungeon crawler genres stripped down to its basics: A single, randomly-generated looping path, littered only with slimes that appear. All you can do is watch your hero walk along it, getting into automatic battles and equipping them with any armor that they can find. But through your actions, be it playing certain cards or creating certain buildings (which can earn additional cards in the process), not only does the world itself get rebuilt, but the core game becomes more and more like a roguelike that you’re familiar with as new gameplay bits are introduced. Through this unique gameplay setup, Loop Hero brilliantly puts you in the shoes of its characters, seeing you try to rebuild a world sent back to the dark ages as well, brick by brick. This even extends to the aesthetics, with pixel art, music and even a little CRT monitor touch that, while all still dazzling, detailed, and which perfectly set the tone (as a side note, the starry void added to the background and unique sound effects for every fragment you collect are small yet beautiful additions), all come across like they’re truly meant to make the game feel like a PC title from the late ’80s or ’90s that sees more modern mechanics (such as crafting supplies that can boost your hero during runs) appear as you progress. It’s genius. 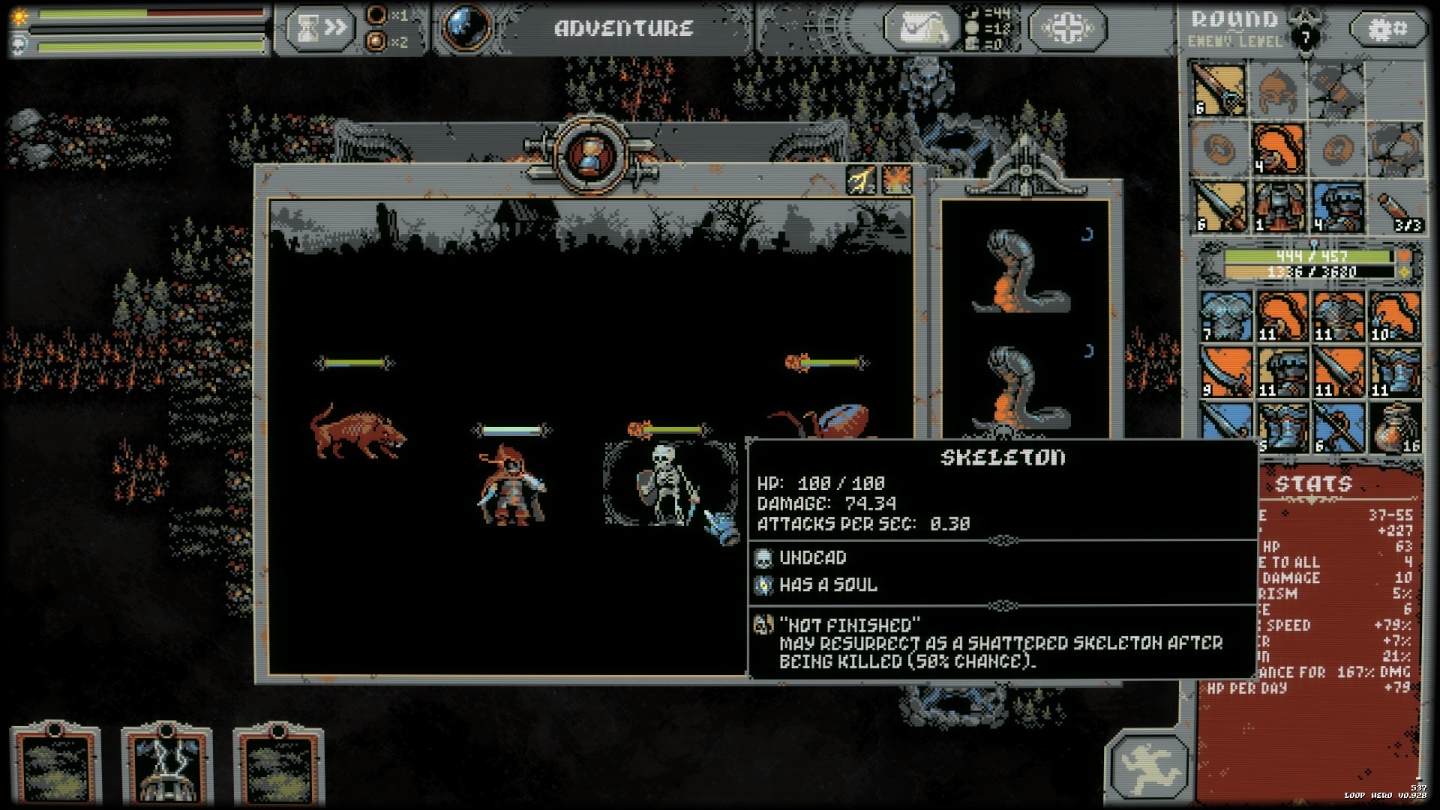 That’s not to say that Loop Hero isn’t great on its own even without these clever touches, of course. Even during the beginning, it’s still a unique RPG that has has you trying to accurately manage the deck you build with cards you earn, the additions to the current loop that you make with those cards and the gear you pick up. And you can only work with so much space before cards or gear are forgotten about, tying in with the game’s theme. Properly managing all of this, however, means experimenting with the cards and new gameplay twists as you unlock them and finding out what they do, and that’s where Loop Hero shows off how deep it can get.

Getting back to where I left off last time, for example, I had just unlocked a new class, the Rogue, who has an entirely different play style, focused around earning gear via trophies, and who can dual-wield weapons but has less opportunities to regain health. So I eventually realized that I had to rely more on villages that I could place down for health refills, even if that meant more quests that create stronger monsters. So this meant having to think more about how to deal more damage and quicker, and realizing what gear worked best for best for me and them. It became terrific, challenging stuff…but it became that even moreso once I unlocked the next class, the Necromancer. Unlike the Warrior or Rogue, the Necromancer doesn’t attack enemies directly, instead summoning skeletons to battle for them, with the number you can summon depending on certain gear or traits. Furthermore, while enemies can attack the Necromancer if skeletons aren’t summoned quickly enough (either at the beginning or when one is defeated), the Necromancer uses magic HP on top of their regular HP, which regenerates in between battles. This was a whole new ball game, as now I had to make sure my gear not only boosted the levels of the skeletons I summoned, but also increased the quality of them, with a higher quality meaning stronger types of skeletons.

But this was where I also realized that, more than ever, Loop Hero is a game about patience. Sure, during the first few runs you can easily be tempted to immediately play any cards that come your way so you can see what happens and try to build a strong hero as soon as possible, but it was clear that approach can only get you so far. Again, you’re encouraged to experiment with new cards, but eventually you’ll come to the realization that this is a game which will gladly feed on your suicidal overconfidence, even as you love every minute of it. Eventually, you have to break the habit and use what you’re learned to formulate the best strategy. 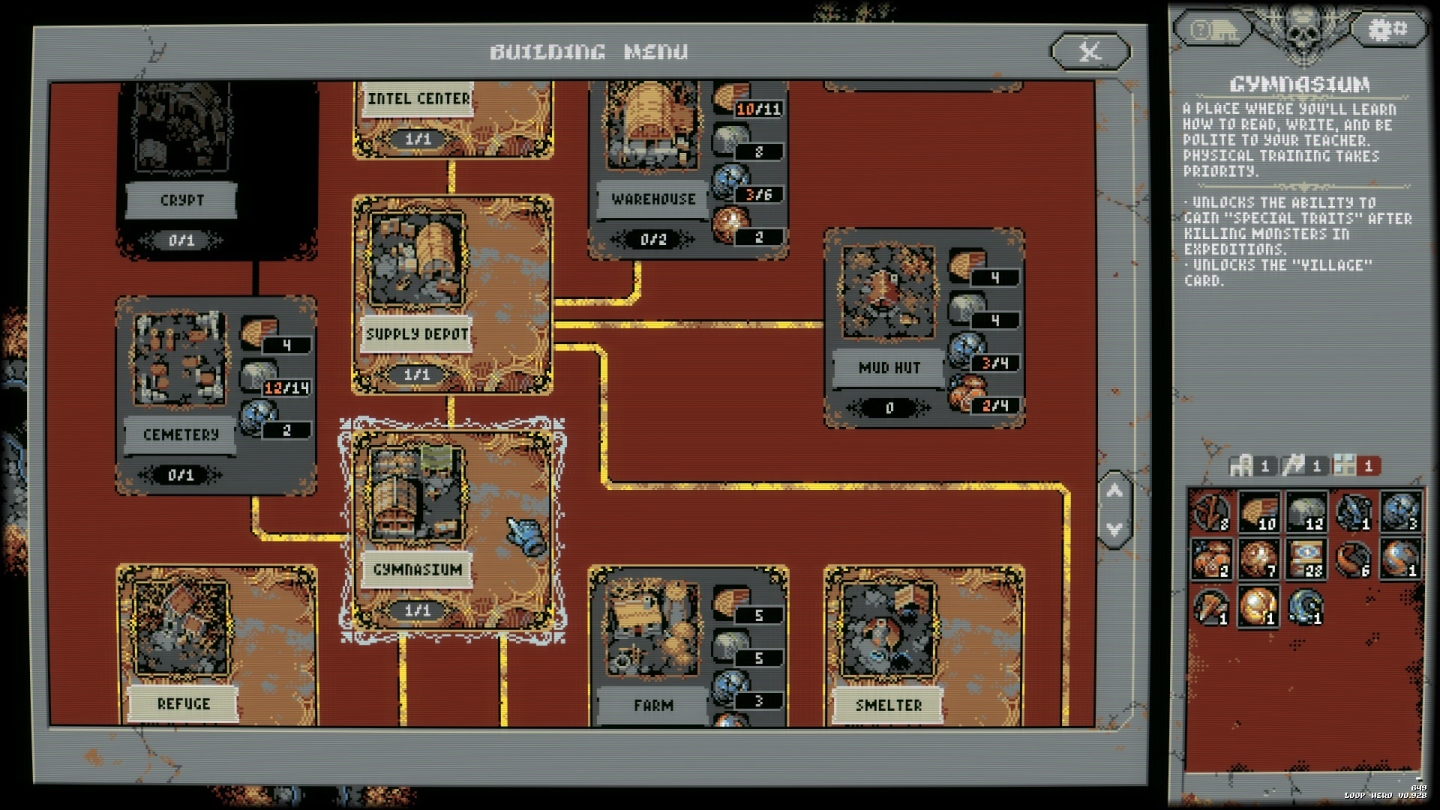 And with the Necromancer, I had it figured out. Since they had regenerating magic HP, I relied less on villages so that I wouldn’t have too many overpowered enemies all at once; one or two would do for safety, though. I also tried to keep the maximum number of skeletons at three, which felt like more than enough to quickly dispose of enemies. But since the Necromancer can still be overpowered by multiple enemies, I decided to place the areas that spawn more monsters (such as groves, ruins or cemeteries) on u-turns in the loop, where road lanterns placed would cover a larger area. Furthermore, I could stack them and keep them to two monsters apiece at a time at most, making things easier.

Similarly, I hold off on planting rocks and mountains until I draw more oblivion cards after defeating enemies, which I could use to destroy the goblin camps that spawn from them (as the camps are placed randomly and the buggers spawn quickly). In between the areas with enemies, I place the beacons to speed up movement before more creatures can spawn, and put battlefields there as well so they can spawn treasure safely. And after carefully managing the gear and getting the right traits, I could easily have high-level allies, which meant they could take out slower monsters like gargoyles ASAP, so I didn’t hold back on building and looting treasuries, which causes them to spawn. It all worked perfectly, a terrific strategy that I was fully satisfied with up until the boss finally appeared, anyway. And it turns out the Lich is not your only foe, others make for vastly different boss battles and this one quickly stomped me into (further) oblivion. Turns out I should have invested more in gear with regeneration boosts.

I discuss all of this not just to illustrate how deep Loop Hero can get, but how there always appears to be something new to learn. My tale and my strategy is but one of many. There are a ton of different approaches you can try, and figuring them out is half the fun. Granted, this is still a roguelike, so RNG can still screw you over at times (like getting dealt the cards you don’t need right now, getting offered so-so lineups of traits with each level, inferior gear pickups, etc), but it’s still hits a good balance when it comes to being tough yet fair. There is just so much amazing stuff to check out here — I didn’t even go further into the writing hitting the perfect tone that mixes bleakness with perfectly-timed comedic bits — that what I had planned as mere quick continuation of my experience with the game from two months ago blossomed into everything you’ve just read. Perhaps I should try this review again? 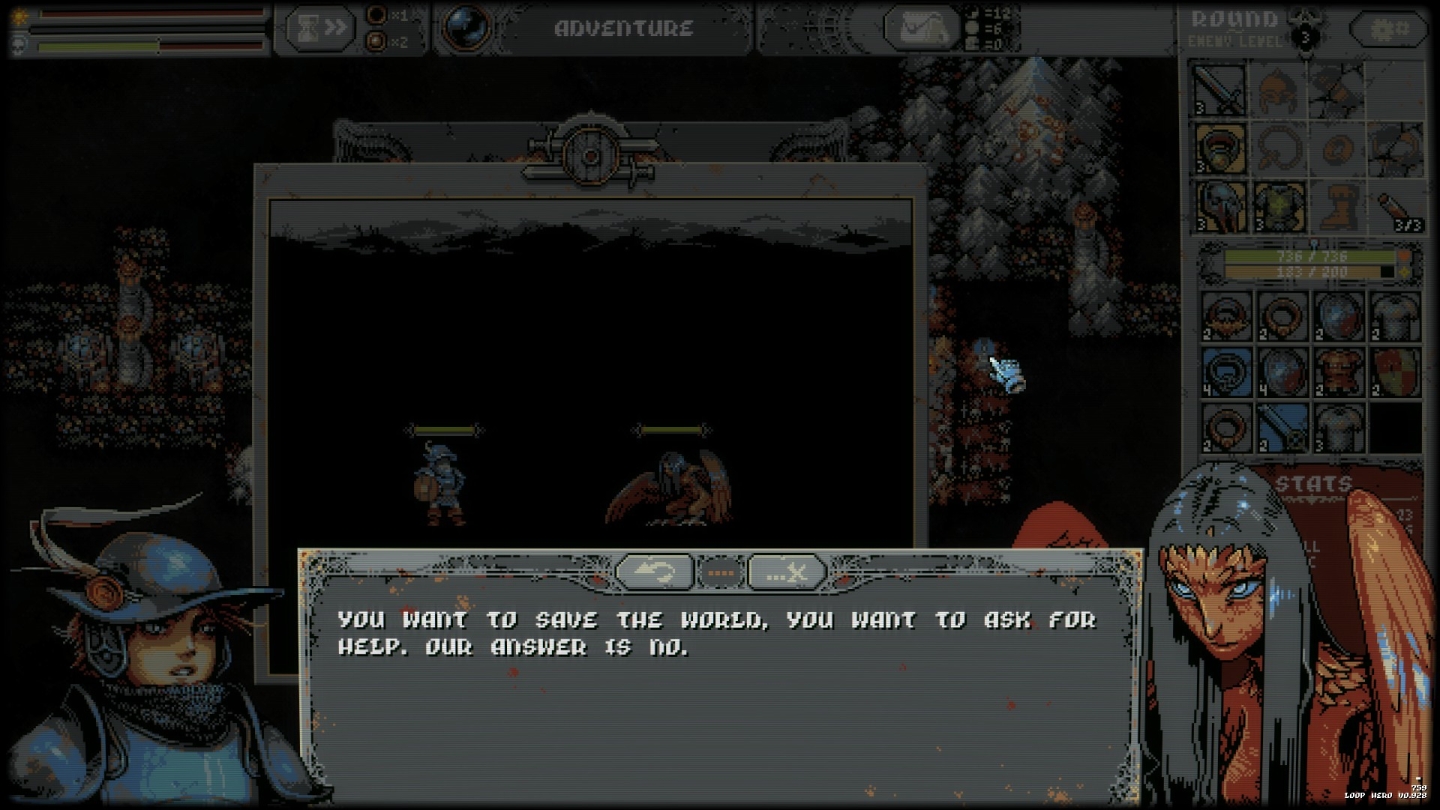 Loop Hero is a brilliant piece of work that plays and succeeds with the idea of repeating gameplay loops via gameplay, story and even meta angles. It’s an absolute beast that will easily rip players to shreds, but thanks to simple gameplay that makes great use of deck-building, automatic battles and experimentation, it ensures that everyone will have a blast trying to design the best world possible for each run. Throw in a gorgeous presentation that perfectly channels classic early-era RPGs and you easily have what could wind up being one of the year’s best games. A fresh twist on roguelikes, it truly is a loop that you’ll gladly want to explore again and again and again and again…