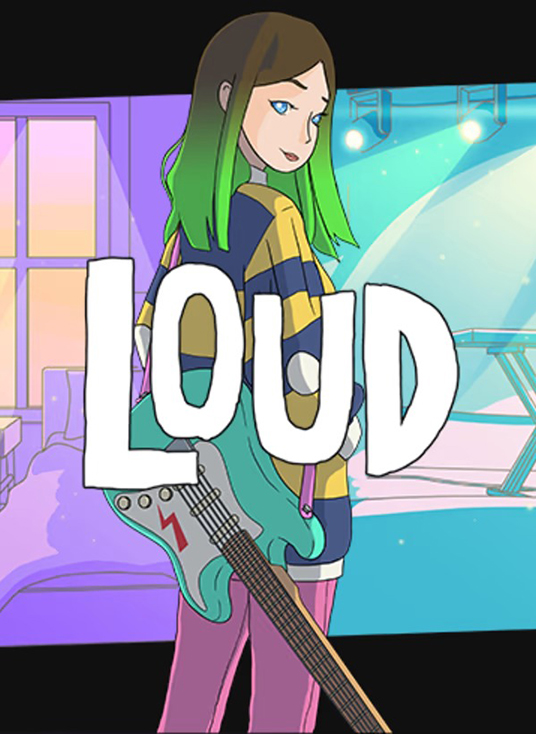 The heart of a good rock band tends to be the guitar.  Not always, of course, but often enough that it’s usually a huge percentage of everyone’s first serious instrument.  Acoustic, electric, bass, whatever.  If it has strings running from neck to body and you can jump around on stage with it, odds are good the guitar is going to be the life goal of a rock-oriented kid who dreams of dominating the stage.  Astrid doesn’t have a guitar, but she’s got a push-broom that doubles as one in her fantasies, and while it may not make much in the way of noise, it’s at least a good prop to dream with.  When Astrid’s father sees her dancing around her bedroom with the broom he knows what he needs to do, surprising her one night with a real guitar to call her own.  With a little focus and a whole lot of practice, maybe Astrid can see her dreams become real.

Loud is the story of Astrid’s journey from teenager goofing around in her bedroom to being an actual musician, although the story is secondary to the music.  Each of the four chapters is a set of three songs bracketed by a pair of short story sections, and while the narrative is bare-bones with stilted dialogue, it gets the point across, leaving the bulk of the time to get to grips with the songs.  It’s your standard “hit button to beat” gameplay, but with a unique layout that allows for intricate note patterns.

Astrid stands in the middle of the screen alone with her guitar while six note tracks stream in from the sides, three on the right and three on the left.  The right lanes correspond to X for the top, B for the bottom, and A or Y for the middle lane, and the left side is the same except using the Switch’s up/down/left/right buttons.  The standard notes are quick-tap stars, long purple lines indicate a hold, while the wobbly red line means to mash the button like your stage presence depends on it.  Put it all together with a driving guitar beat and nicely-tricky note patterns pop out. 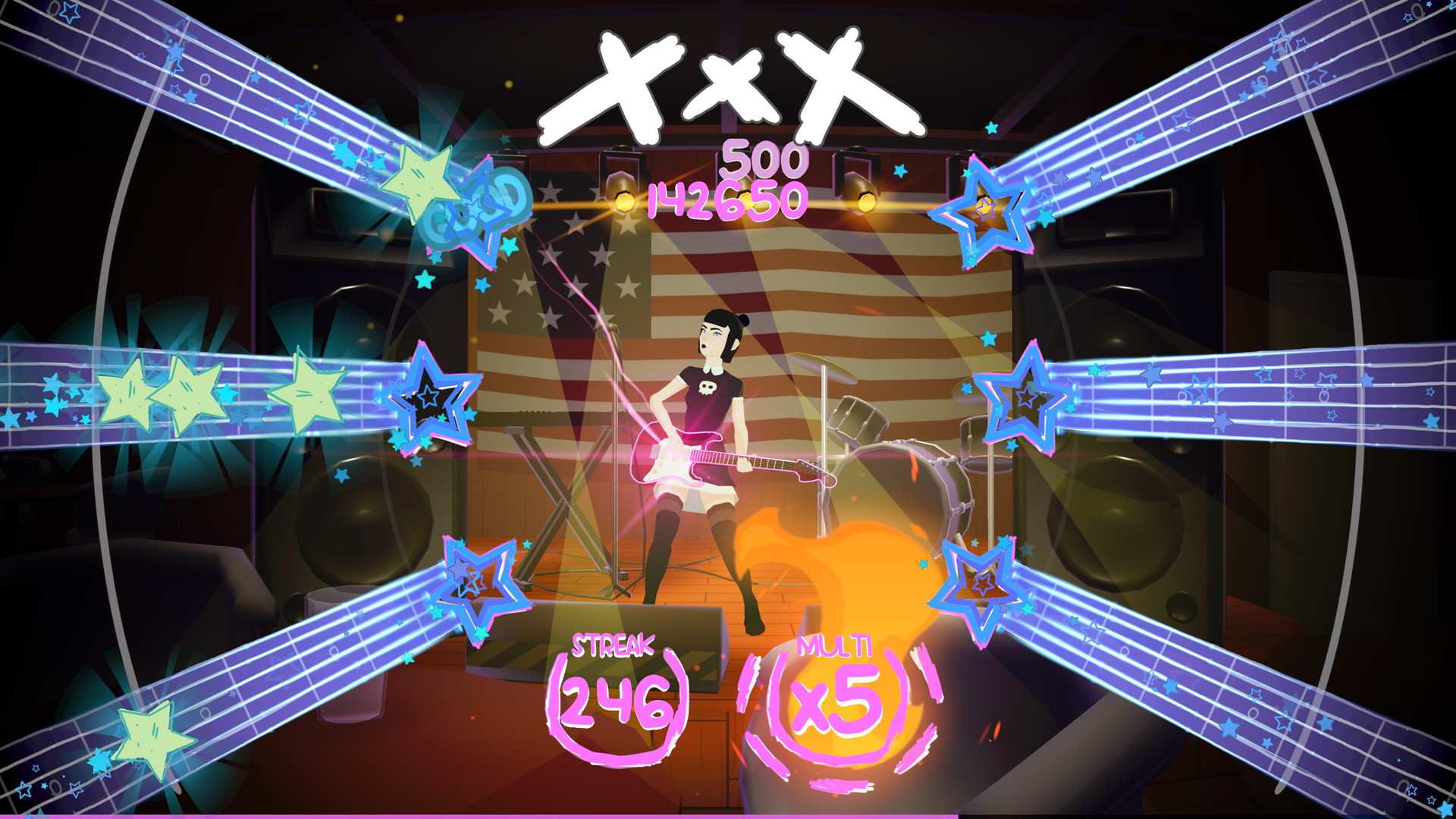 While Loud is no slouch in the challenge department, it does come with three difficulty levels plus an unlockable extra-hard one, making it accessible to players of just about any skill level.  The Chillin’ difficulty should be easy enough for anyone, while the normal-tier Skillin’ throws out patterns that require good dexterity to hit on the later songs in the game and can take multiple plays to at first survive and then score better than a low C ranking.  The real problem with clearing a song on the mid-tier difficulty, though, isn’t so much the game and the denser sections of its note track, but rather the hardware it’s played on.

If you’ve got small hands you can probably skip this part, but every once in a while a game comes along that reinforces how the Switch Joy-Cons are made for kids.  The way the buttons correspond to the positioning of the note tracks means you can almost instinctively know what to hit on the controller, but the controller layout being so small makes it far too easy to overshoot.  When the notes are flying thick and fast the last thing you want to have to do is mentally remap the button layout, but it’s too easy to lose your place as your fingers jump from top to bottom to middle and then switch from the note tracks on the left back to those on the right of the screen and back again.  It can get frustrating to know exactly what you want your thumb to do only to find your hands calibrated for a more standard-sized controller.

Less hardware-oriented, the other problem with Loud is that its levels lack energy and much in the way of personality.  Astrid is always by herself in the center of the screen, nothing happening in the background, and while any non-note action can distract from the scrolling music patterns it makes for a game that feels kind of lonely.  In one of the chapters Astrid is in a band but it’s still just her playing a guitar alone in a garage, while later she’s on a stage with no audience.  As for the music, the tunes are fun to tap out notes against but there’s nothing really memorable that you’ll find yourself humming later on.  It’s probably unfair to compare Loud (or any other music game, honestly) to Gitaroo Man, but just about all Loud‘s problems would be forgiven if there was a single song with the energy of Born to Be Bone or Mojo King Bee in there. 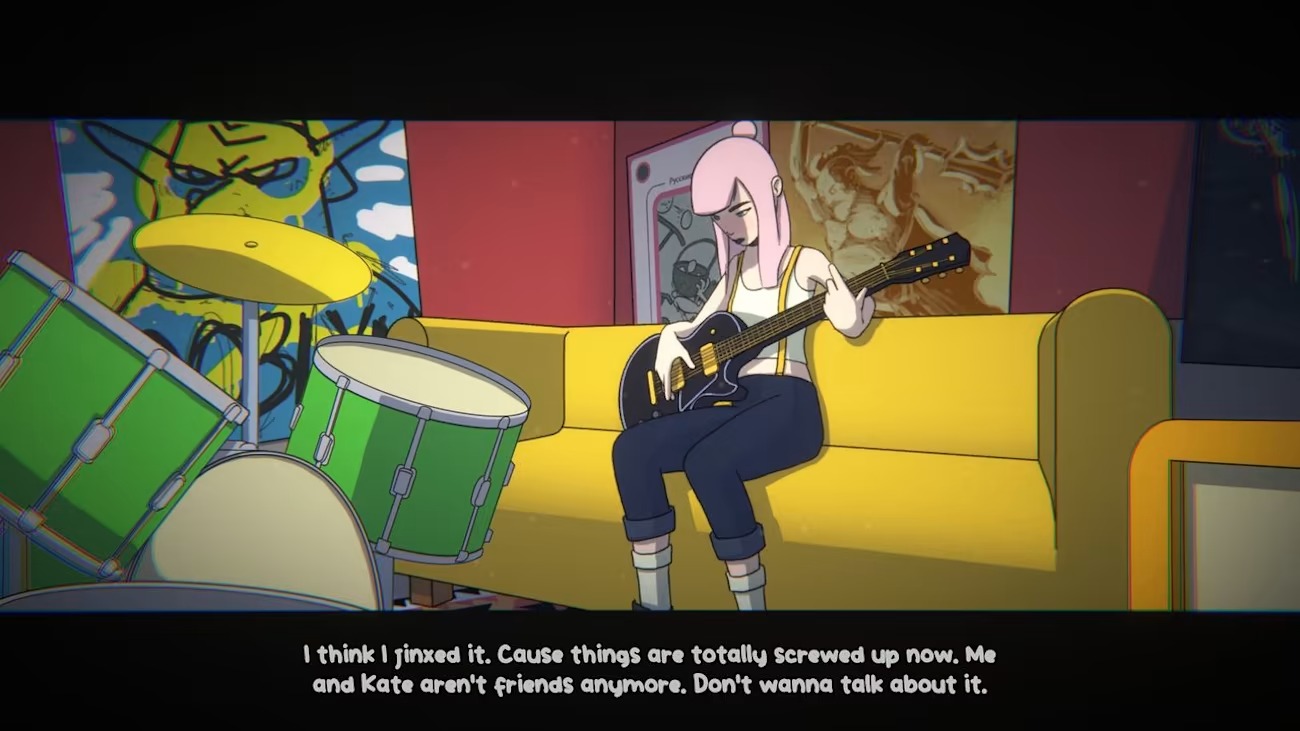 While I found my playtime kneecapped by the physical hardware, Loud has nice tunes playing in sync to plenty of fun note tracks.  Astrid’s tale isn’t particularly deep (what happened to her band?), but she’s a likeable character who grows into her music over the three years of the story.  The twelve tracks have plenty of replayability thanks to the multiple difficulty levels, and there’s even an extra-hard bonus tune awarded in the free-play mode after game completion.  Loud is a capable little music game with a lot of heart, but be aware you need either small hands or maybe a Pro Controller to get the most from it.