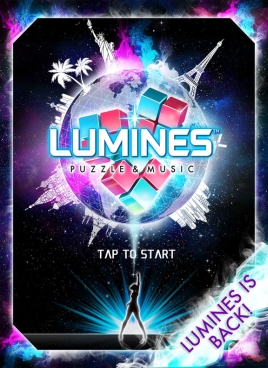 Lumines was a killer app on the PSP, providing players with a puzzle and music experience that had never been done before. The concept of spinning blocks around to form a larger block was theoretically nothing new, but the combination of fast-paced music, ever-evolving shapes and colors, and bright backdrops led to something special. Two releases on the PSP, one on the PS2, PS3, Xbox 360, and another as a Vita launch title showed a steady evolution of the series. The graphics went from good to great and the core formula remained something that could be enjoyed in any context. In many ways, it was like Tetris — but with a modern twist. It never caught on to that degree, but remained highly-respected. Unfortunately, we haven’t seen a new entry in four years – but Puzzle and Music being an app could easily lead to the franchise reaching greater heights than ever before.

With this being an app, it has a far lower price point and that is naturally going to entice more people to play it than if it was a $15 download on a console or $40 retail release. Puzzle and Music is part new content and part compilation. The Puzzle and Music content is all-new and impressive — even if it is a bit lean in terms of overall amount. This portion of the game has eight new songs, skins and level setups while the Classic portion features half a dozen levels and songs from the first game. Fortunately, everything here is top-notch and this kind of game is built on replay value.

It’s one thing to beat a stage and it’s another to master combos. Like every Lumines before it, you will always strive to get a better score. Initially, you have the easy modes to conquer and these will teach you the core mechanics fairly well. Your goal is to put different colored block sets of four into matching sets and then just make sure they don’t reach the top. It’s a fairly simple premise and one that has worked well on every platform it has been put on.

Easy mode teaches you thinks gracefully and then normal ramps things up. It’s a considerable upgrade in difficulty, but also features a steady climb. The stage progression never gets too overwhelming and as long as you play smart and keep your rows fairly low, you can excel at any difficulty level. Conquering the difficulty ladder is just one part of the thrill through — when you reach new high scores, that’s when everything clicks and you get more and more addicted.

With this being the first Lumines game on a mobile device, it could have led to an odd transition — but fortunately, it’s seamless. Much like Lumines clones on mobile marketplaces, tapping acts the same as a button press would on a console, and instead of pressing down to rush pieces into place, you just swipe down. It’s a 1:1 changeover, and while there is a bit more of a delay compared to a traditional controller setup, it’s not a huge difference. It’s a easy change to make mentally too — so even if you’re used to the prior games, you can get used to this new control setup in a single play session. A controller option would have been nice though, as there is still a slight delay compared to just pressing a d-pad and button and it’s not a huge issue and never costs you a game — it will lead to some perfectly-timed moves in your head not quite panning out in-game though.

Visually, Lumines: Puzzle and Music is fairly solid. It looks about as good as the Vita entry, and the franchise’s graphics haven’t really evolved much since its PSP days. However, while that may sound bad in theory, it isn’t in execution. Like Tetris, the core concept only needs to look so good for it to work and adding too many bells and whistles can result in an experience that is simply too busy for its own good. The tiles themselves look solid, while the background art is beautiful and has a lot of detail to it. Each skin stands out and results in each stage feeling different, which combines with the stage-specific music to create an experience that is enjoyable and memorable. The portrait mode-only gameplay takes some getting used to though — especially since most entries of the series have been presented in a widescreen format. It doesn’t affect the core gameplay all that much, but is a little strange since there’s a lot of wasted real estate on-screen.  Slowdown when the game transitions from skin to skin during a play session hurts the flow of things — although it does have a minor benefit by giving you more time to plan a move.

Music and sound design has always been a strongpoint of the series, and that foundation remains strong here. For a series that gained notoriety of infusing dance music into the puzzle genre, Puzzle and Music incorporates more relaxing fare than prior entries. Songs like “Blurred Light Island” are slow and almost new age-esque in how tranquil they are. When combined with sound design that shifts depending on the nature of the level or skin you’re using, it creates an incredible atmosphere. The Paradise level uses “Blurred Light Island” and its underwater setting and bubbles instead of blocks result in a popping sound and a slightly distorted sound — akin to being underwater. It’s a small touch, but it helps make that area feel different than anything before or after it.

The game itself recommends using headphones, and with good reason. When you just use the default speakers on your device, you will hear the most notable parts of the sound design — but miss a lot of the little flourishes. While playing with both Astro A30s and Status Audio HD Two headsets, I noticed a lot more nuance to the music and the overall sound design was richer. If you’re playing this on the go, a solid set of earbuds might be a better overall option, but if you can play it with some quality headphones, do it — you’ll wind up with a more rewarding experience.

Lumines: Puzzle and Music is a glorious return to form for the series. It takes what was previously a gaming device-only franchise and transitions it successfully onto mobile platforms. While it would be nice to have traditional controller support, the touch-only setup here works fairly well. Visually, it’s about on-par with the full-fledged console entries, but does have some slowdown when it comes to moving from level skin to level skin. It still provides a great soundtrack though, with slick sound design that makes use of headphones — but is enjoyable without them. Newcomers to the series should try this game out given its low barrier of entry, while veterans should buy it to keep supporting the franchise in its newest incarnation.