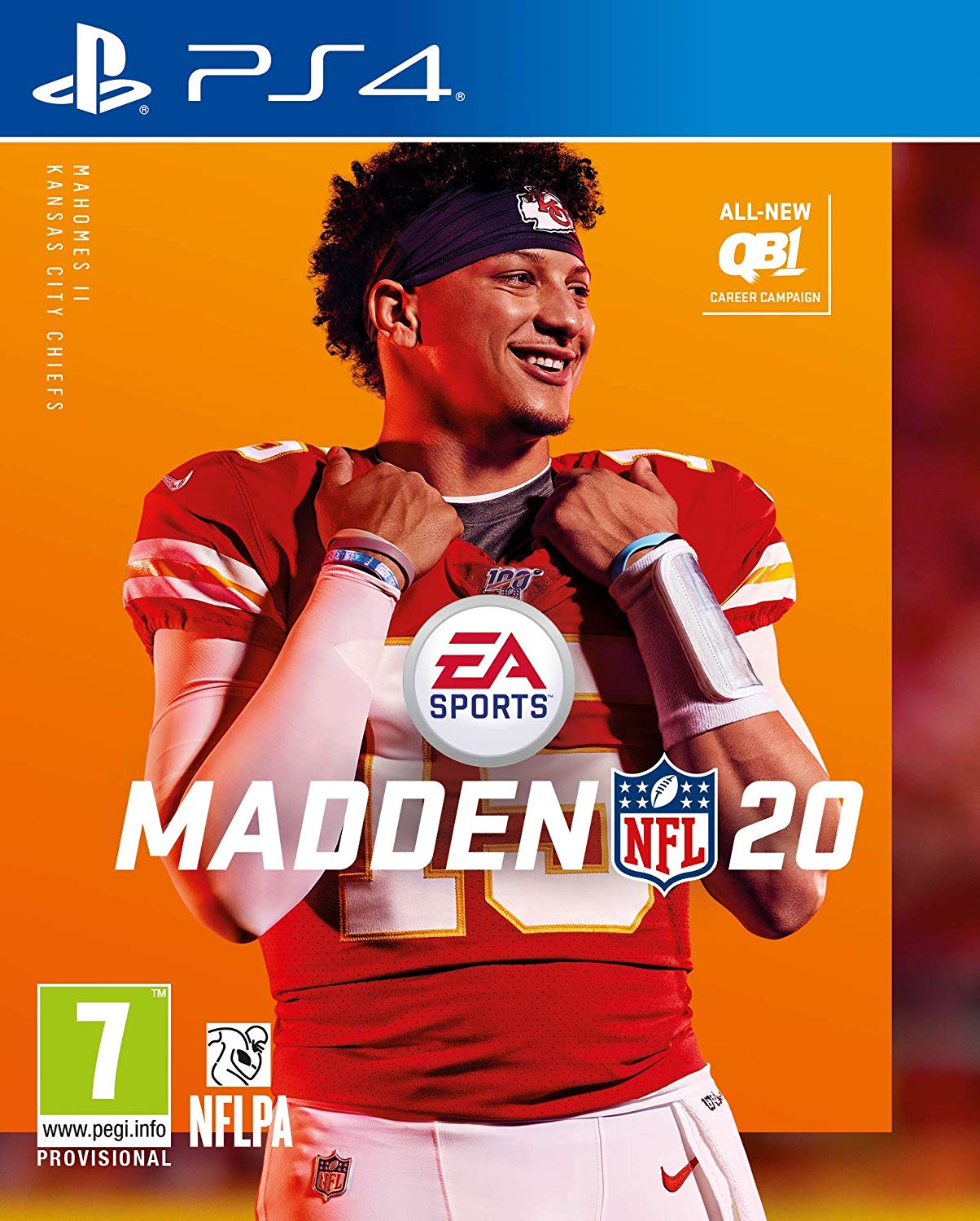 It’s that time of year again. The dog days of August, school starting and football is on the horizon. This means the release of the new Madden NFL game by EA. Madden NFL 20 is the sixth iteration of the series for this current console generation. With the new console generation around the corner, developers have a track history of switching priority to the next wave of games, which always seems to be the most apparent in sports games. Luckily, it seems that this year’s Madden isn’t completely succumbing to this. EA Tiburon has implemented Superstar X-Factors to give the league’s most exclusive players an advantage. While the gameplay features remain grounded from previous year’s games, the action on the field sees the biggest change.

Patrick Mahomes may have single-handedly changed the way football was played last year. As this year’s cover athlete, EA Tiburon is embracing his over-the-top play and implementing that into Madden NFL 20. The biggest change is how fast the gameplay has gotten. EA Tiburon wanted to not only speed up how fast games can be played, but how fast the action is on the field. This is quite possibly the most responsive Madden has ever been in terms of controls. Animations are fast and smooth as players transition quickly on-the-fly. This has an effect while playing defense as it will take some time to adjust how players go about tackling the ball carrier.

The Superstar X-Factors play the biggest factor on the field. If a team has a good number of players, they will most likely be a favorite for those playing the game. These players have attributes akin to RPG characters. Players such as Christian McCaffrey will have a bonus for spin moves or making catches out of the backfield. If a player has a speed bonus, this is a huge advantage. Players like Tarik Cohen or Tyreek Hill become nearly impossible to handle in the open field. 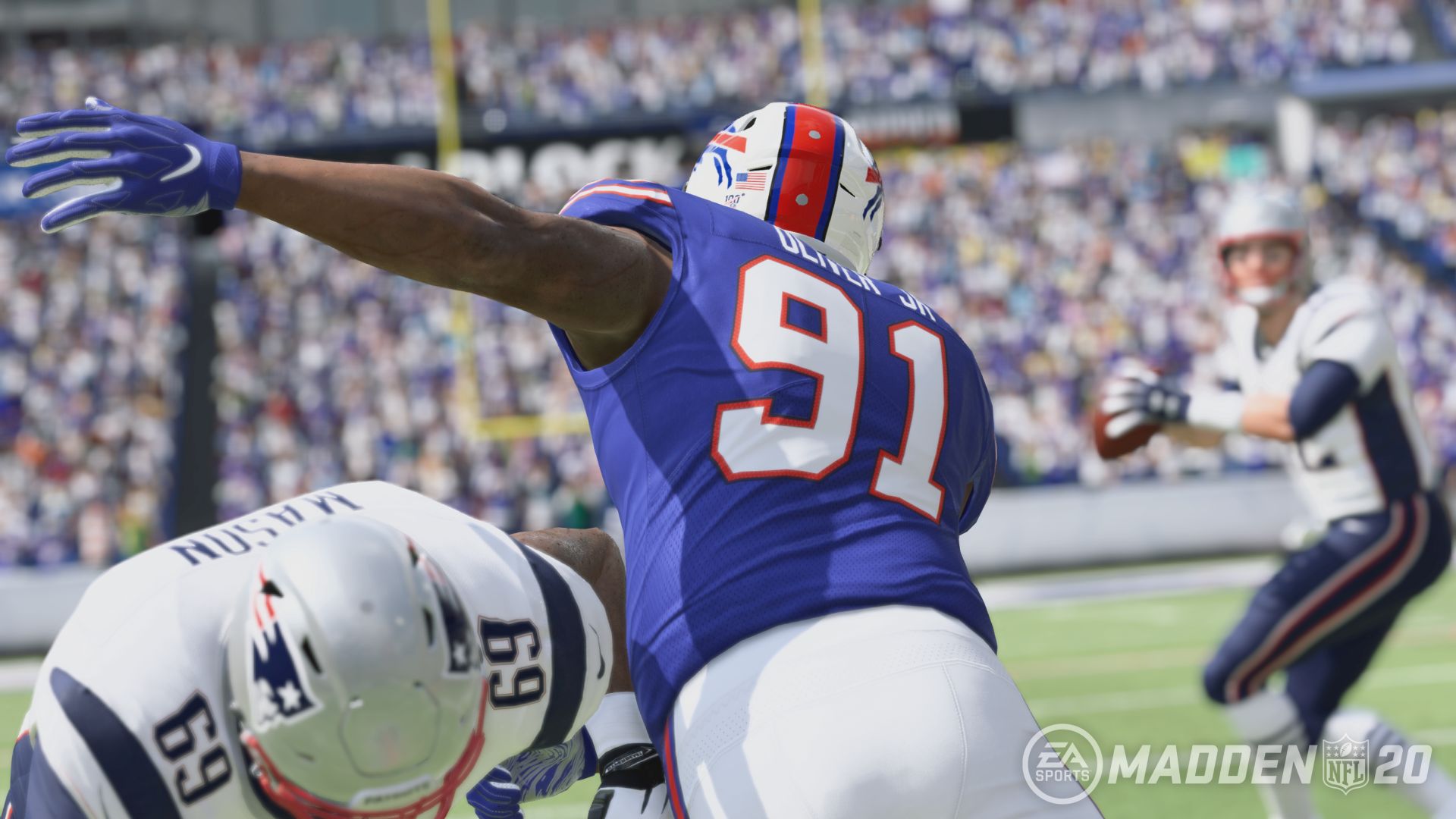 EA Tiburon implemented the Attribute Icons last year and the X-Factors build on that. One thing is that there seems to be a wider variety of attributes this year as there isn’t a lot of players tied to one specific X-Factor. This goes even further with the general Superstars who lack the X-Factor. These players, however, still have attributes that give bonuses. There are only about twenty players who have the X-Factor, while there are quite a bit more that have Superstar abilities. The biggest thing to take away from this is that it will dictate how well a higher-rated player contributes versus a lower-rated player. It’s most noticeable with wide receivers and secondary players.

What the Superstar X-Factor and Superstars in the game does is almost turn Madden into fantasy football in motion. In reality, with the speed of the game and basically these fantasy attributes implemented, it takes away from the realism and simulation aspect. This, of course, has always been on the fence to begin with. What it does, however, is make Madden NFL 20 quite possibly the most “Madden” the game has ever been. One thing is for sure: Madden NFL 20 is a lot of fun as the speed and experimentation with different teams will have players trying different teams and play styles.

One of the biggest additions that seems to have went under the radar this year is the addition of RPO plays. RPO, or Run-Play Option, allows players to quickly pass a ball on specific running plays. They are listed as RPO in the playbooks. This isn’t necessarily something that can be spammed, but it can come in handy more times than not. They aren’t perfect as some are a bit more complicated to pull off or take too long to develop. Another issue is that a flag can be thrown for an illegal man downfield. The league has had RPOs for a few years now. While EA Tiburon has stated they updated team playbooks, there are a few teams behind in terms of their schemes. 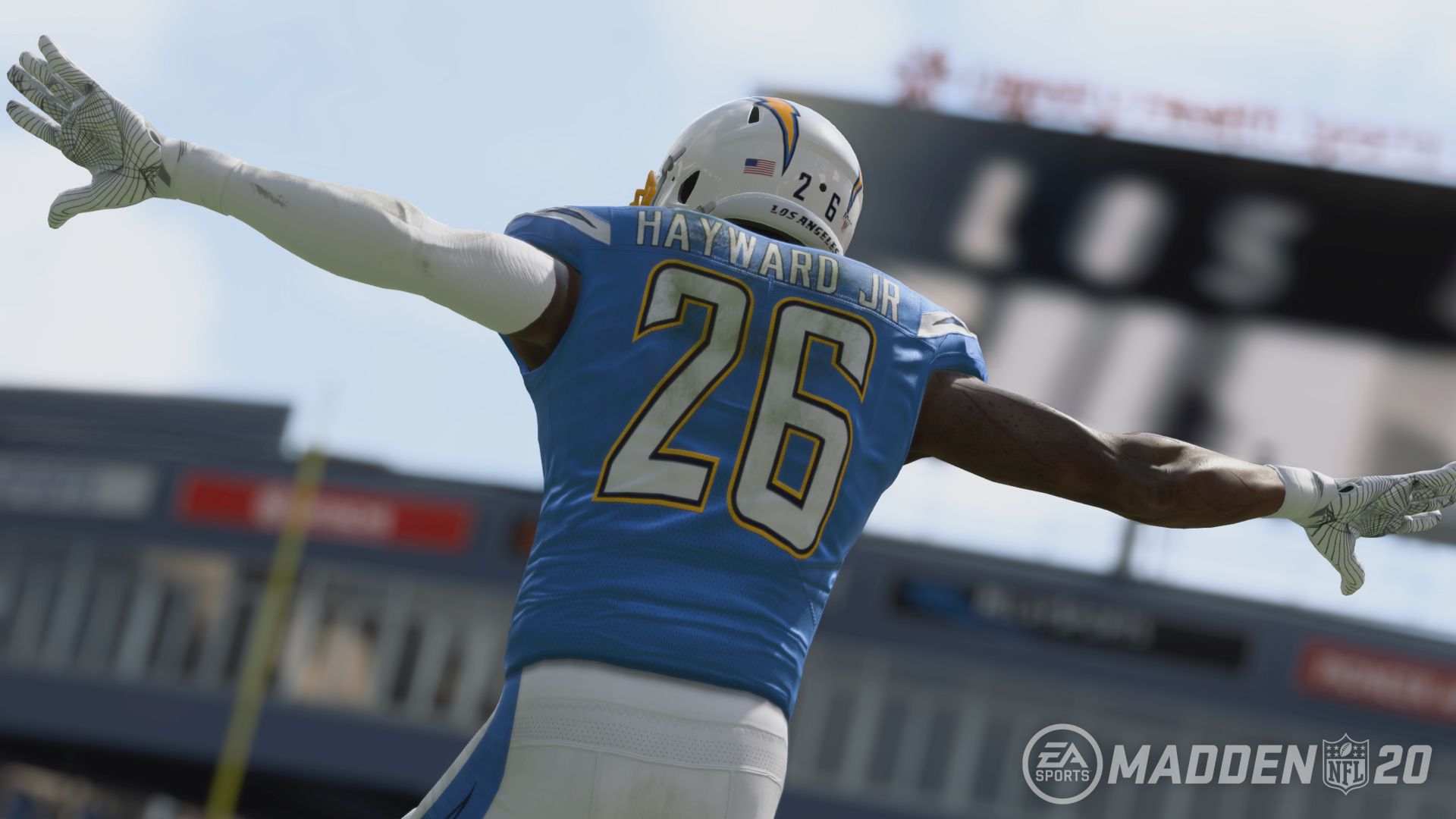 Madden wouldn’t be Madden if it still didn’t have its legacy issues and there are still quite a bit that stick around. If you are a fan of how Madden plays, you’re going to enjoy how well the game plays this year. If you are someone that can’t stand the lack of pass interference calls or the inability to properly lob fade routes in the back of the end zone, that’s still here. The running game feels better than it ever has in the series, but you will still find yourself getting hung up behind lead blockers.

Defenders still focus on you, so you can still change your angle if you have a blocker in front of you to hold up that defender. The ball also seems to tip a bit too much this year. Lastly, it still seems that pre-determined AI still exists in the game. If the computer is going to score or basically do what it needs to to achieve a certain goal, it’s most likely going to happen. Having said all that, there do seem to be improvements in other areas. Offensive and defensive line interaction, especially when playing the D-Line, feels a lot better. Also, if you dive at a Quarterback’s legs, there will be a roughing call no matter what. Catching on the run shows flashes of improvement, but some of the transitional animations are still holding this back.

The underlying truth to the inclusion of the Superstar X-Factor players is that it ends up being geared towards Ultimate Team. These players are advertised during loading screens as if they are trading cards. Ultimate Team returns with the ability to do mission challenges to speed up the process of building your team. The X-Factor players will be the ideal players to collect, so EA is hoping that you just spend real money towards getting these players. The pre-order packets amounted to duds in terms of cards provided. There are NFL legends included, but overall the mode doesn’t introduce anything new. That goes for the rest of the game modes, as well. 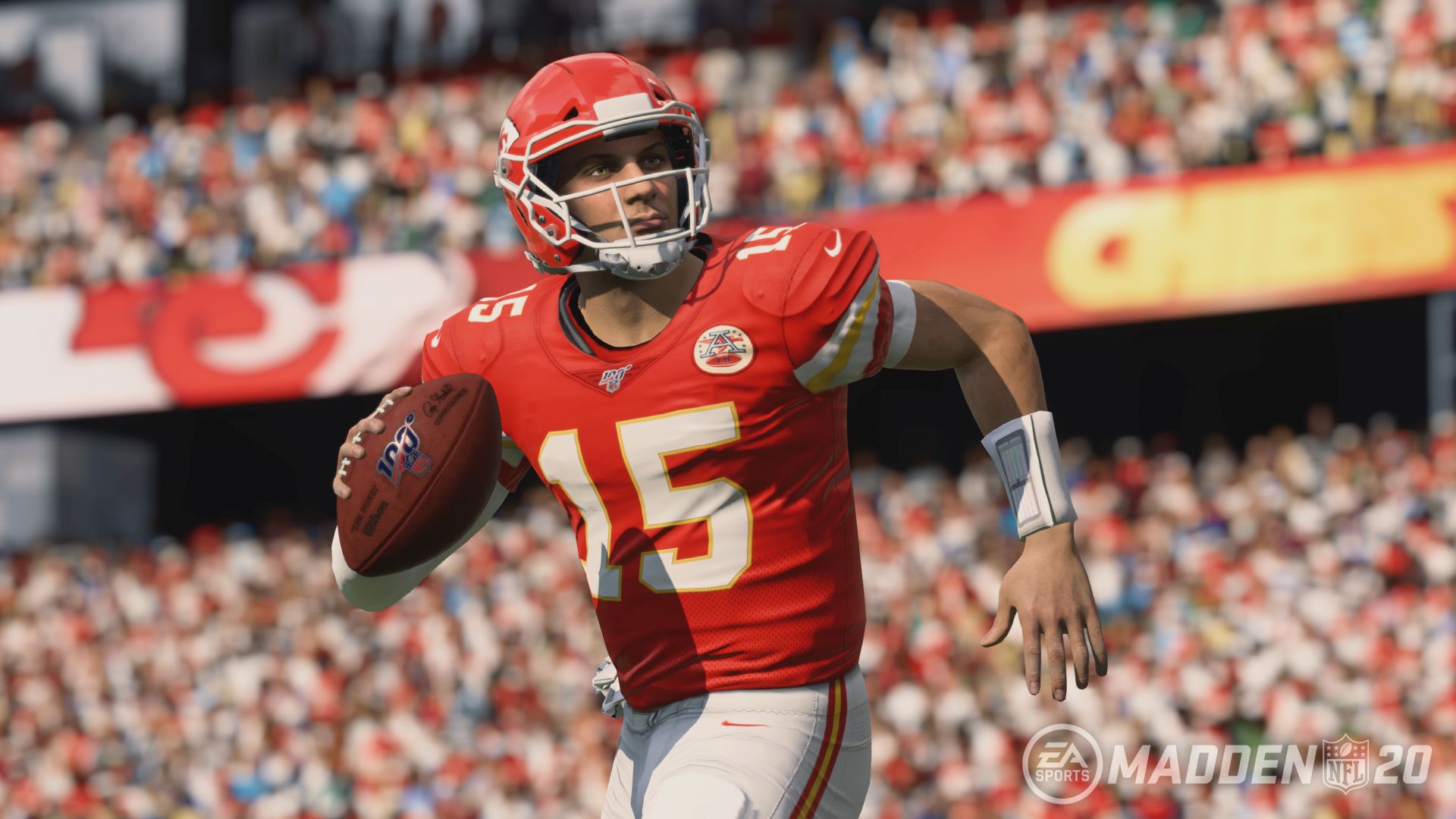 The main screen is dumbed down this year as opposed to previous years. Exhibition, Franchise, Ultimate Team and the new Face of the Franchise — QB1 mode — are prevalent on the main screen. Exhibition is where you will find online play, quick play, Pro Bowl and the unchanged Skills Trainer. Franchise Mode, again, goes largely untouched besides the inclusion of text message from coaches to establish weekly goals. The core of this game really hasn’t changed since this generation started.

Face of the Franchise: QB1 is the only new mode this year as EA left Long Shot in the dust. Long Shot was surprisingly enjoyable as EA Tiburon went a different direction this year. Players will create a Quarterback and will actually participate in the College Football Playoff with the choice of about a dozen NCAA teams. There aren’t a lot of creativity options for the player, but physical attributes can be adjusted. Players will progress through a narrative experience to set the personality and skills for the Quarterback. This narrative can’t be skipped, even the unnecessary scenes, and lacks consistency.

Players will play both sides of the ball in College for some reason, as when reaching the NFL the Quarterback only plays when he’s on the field. College teams can’t be selected in Exhibition Mode, so I am guessing this is EA allowing for an extremely watered-down NCAA Football experience. This mode ramps up when the dynamic aspect kicks in. After either flopping out of the playoffs or winning the National Championship, players advance to the NFL Scouting Combine where the only thing to do is timing routes. There are some quick interviews with NFL coaches. The NFL draft comes and either the Quarterback is invited or is sitting in a hotel room with an annoying player agent. EA Tiburon here does a good job of capturing the anticipation (or frustration) of being drafted. After, the Quarterback is provided some choices for their X-Factor and Superstar traits and then the goal is to earn the starting job on the team that drafted him. Playing each week will build a Legacy Score as you level the player to get better and better. Face of the Franchise has its ups and downs, but this narrative aspect needs to go. MLB The Show really got it right this year with Road to the Show and there was no narrative involved to hold it back. 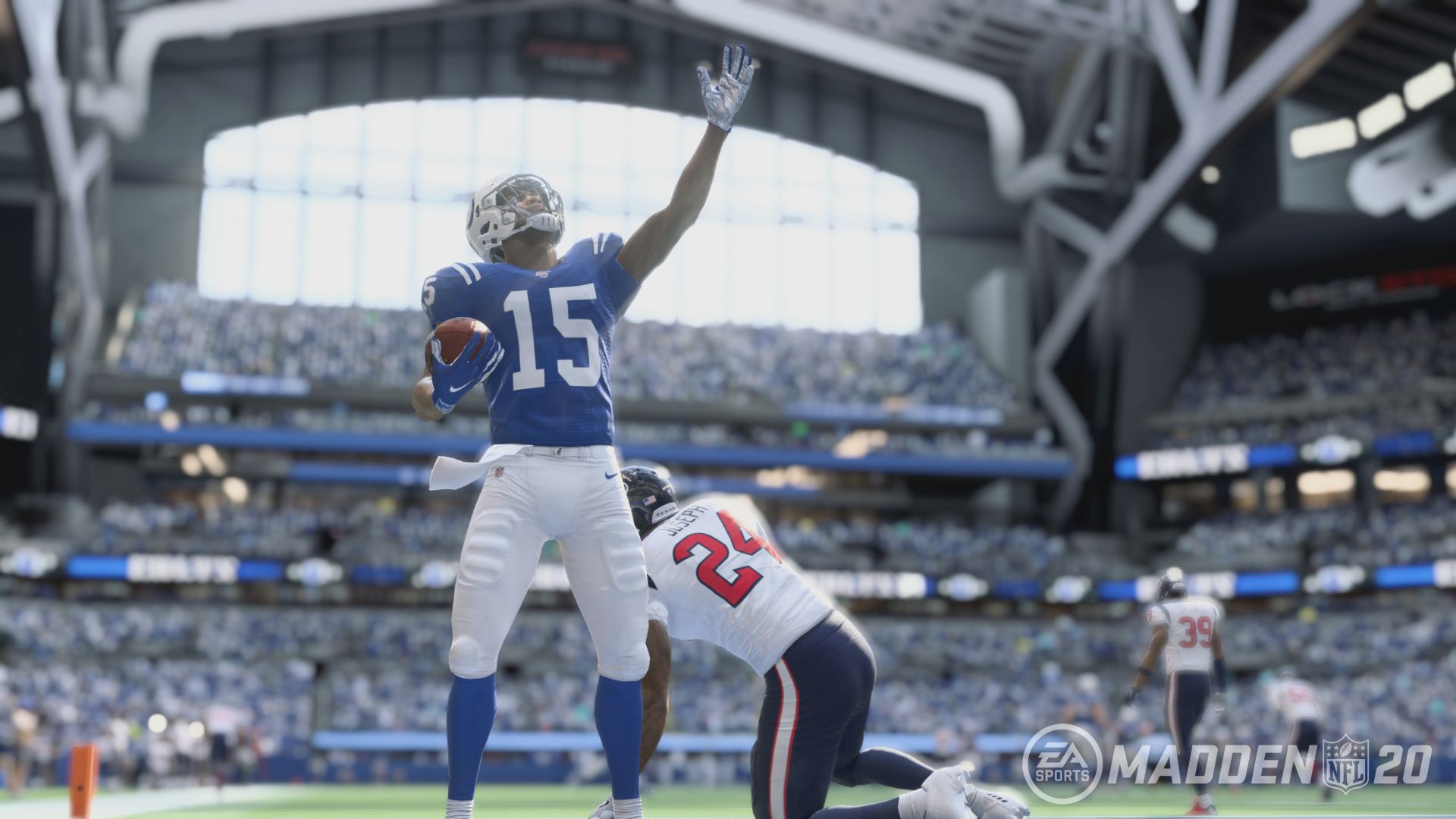 This is the third year of Frostbite in Madden and it is the visual peak of the series. Facial scans and animations show flashes of greatness. The lighting is perfect in certain scenarios but during cutscenes, there will be some strange glow from helmet reflections. As for the visuals during play, the game is visceral and fast. The one knock is the choice to make receiver icons really, really small. There will be occasional clipping and graphical hiccups between player models, but the game mostly looks fantastic.

Brandon Gauden and Charles Davis return as the commentators and have really become the voice of Madden. The chemistry between the two still isn’t there and while you will hear some updated commentary, these two easily become background noise over time. Jonathan Coachman also carries over his performance from last year as the introduction and overall presentation is nearly identical.

Online play is finally where it needs to be in terms of gameplay. Input lag is minimal and the game is the most responsive it has ever been. The only issue with online play besides the occasional disconnect is kicking the ball. While the overall gameplay is responsive, there is just enough input lag to not hit a perfect kick. Online is reduced to quick ranked matches and quick matches with friends outside of what is in Ultimate Team. 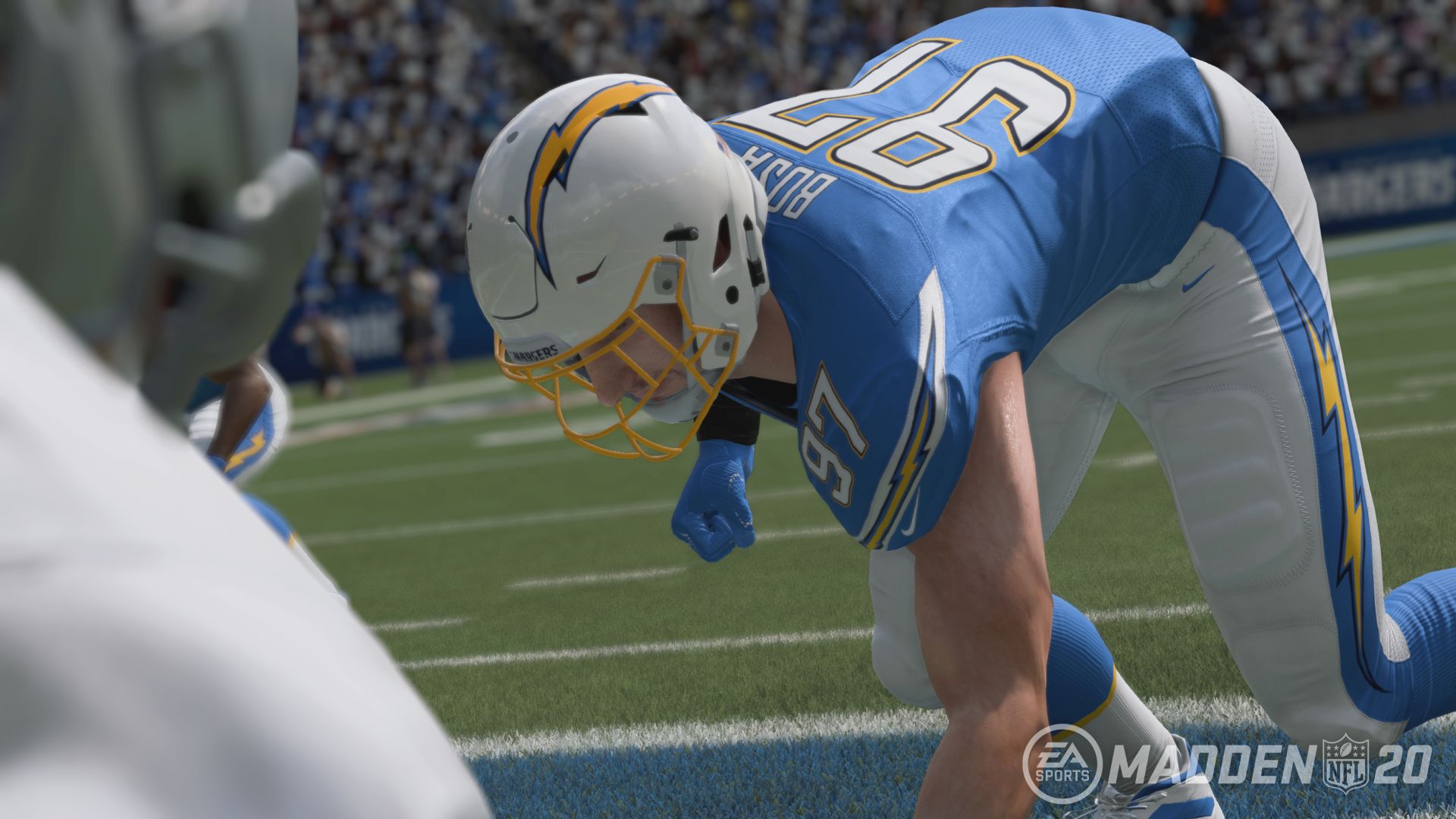 Whatever your stance on the current state of the Madden franchise is, it will either get a lot better or a lot worse with Madden NFL 20. The changes in the game seem to cater to what the community wanted as EA Tiburon has stated they listened. This community, however, consists of players who are on their forums and those who compete in their tournaments. If you like the fast-paced and high-scoring outcomes much like the NFL wants its games to be, this Madden is for you. Simply put, it has an arcade feeling with simulation elements. If you’re looking for improvements to game modes, that isn’t happening even though Face of the Franchise shines at times. Ultimately, Madden NFL 20 is the most fun the game has been in quite some time, but not the most realistic and doesn’t add any evolution in its game modes.