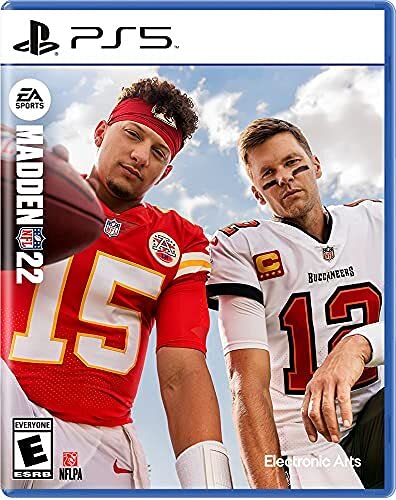 When Madden made the jump to the current generation of consoles last year, EA Tiburon implemented the new core mechanic of Next Gen Stats to base the franchise around for the immediate future. While there wasn’t a giant step from the previous generation to the current generation for Madden, the team had at least laid the foundation that would allow for a plethora of potential going forward. On top of this, EA Tiburon listened to fan feedback and started addressing Franchise Mode with incremental updates throughout the season. Ultimately, this would build to where we are today with Madden NFL 22, which feels like the true generational leap for the series with some of the biggest changes in years.

As mentioned, it all started last year with implementing Next Gen Stats, which allowed for more variety on how players acted on the field. Receivers taking routes that are better replicated from what is seen on Sundays were a driving force to change the gameplay. With Madden NFL 22, this has been amplified by being grouped in with Dynamic Gameplay. This drives AI-team strategy based on the individual team’s profile such as the play calling and the tendencies. Percentages and analytics play a larger role this year, and players are able to strategize prior to the games on how to attack on offense and defense. This also includes the ability to make halftime adjustments based on what the other team is doing. This is truly one of the gamechangers that adds a new dimension to this year’s game.

Madden NFL 22 introduces a Momentum Meter that sways specific advantages throughout the game. These levels get unlocked the better a team does in the game. Homefield advantage plays the biggest role that the Madden series has ever seen with each stadium offering varying degrees of difficulty that truly does make the gameplay more dynamic. Away teams are able to gain momentum as well, but have less options available. For instance, in Buffalo, the kick meter can sway back and forth for the away team. For Cleveland, the DualSense controller will go nuts as long as the momentum is up for the home team. Players can expect missing icons, bad hot routes or traits that are more specific to that stadium that begin subtle, but can erupt into a game-changing force. 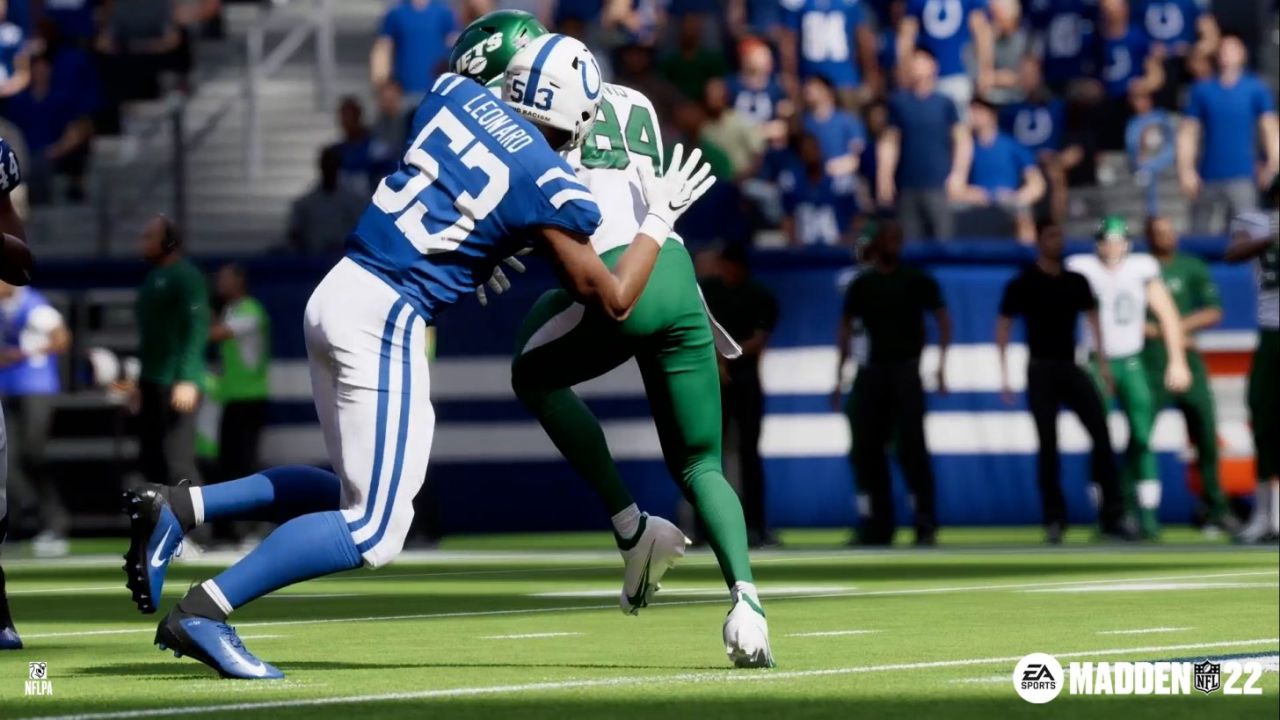 The final portion that goes into the Dynamic Gameplay is the Gameday Atmosphere. Gone are the days of the Madden Soundtrack casually playing in the stadium. The crowd reacts more appropriately with stadium-specific chants and music used to better replicate what’s experienced in a stadium. This allows the game to feel more like an actual NFL game rather than an advertisement. More cutscenes involving fans and the crowd are there to add a better element along new sideline cutscenes. A conscious effort was made to recreate the feel of an NFL game and it’s a swing in the right direction.

Animations are more varying and more abundant during gameplay. It’s not perfect and there are still gaffes, but it looks and feels fantastic when everything works properly on a play. Gameplay has been sped up and feels more responsive. Offensive line blocking has been improved and shows bright spots. It caught me by surprise, for instance, when a lineman landed a pancake block in front of me. The logic for blocking is much improved, and coupling this with the responsiveness of the controls while running the ball, the running game feels much more realistic. Superstar X-Factors for running backs can also become overkill once they are fully achieved.

Creating pockets for quarterbacks has provided a boost to the passing game. More importantly, sideline catches can look amazing. The interactions between defensive backs and wide receivers feel like they provide more control for the player than ever. Going up one-on-one to either intercept or break up a pass is intense. Pass rushing on the defensive line feels much more consistent as it isn’t easy to get through and you’re not completely shut down to get to the quarterback. Lots of animations will feel new and is a better replication of what is seen during an actual game. 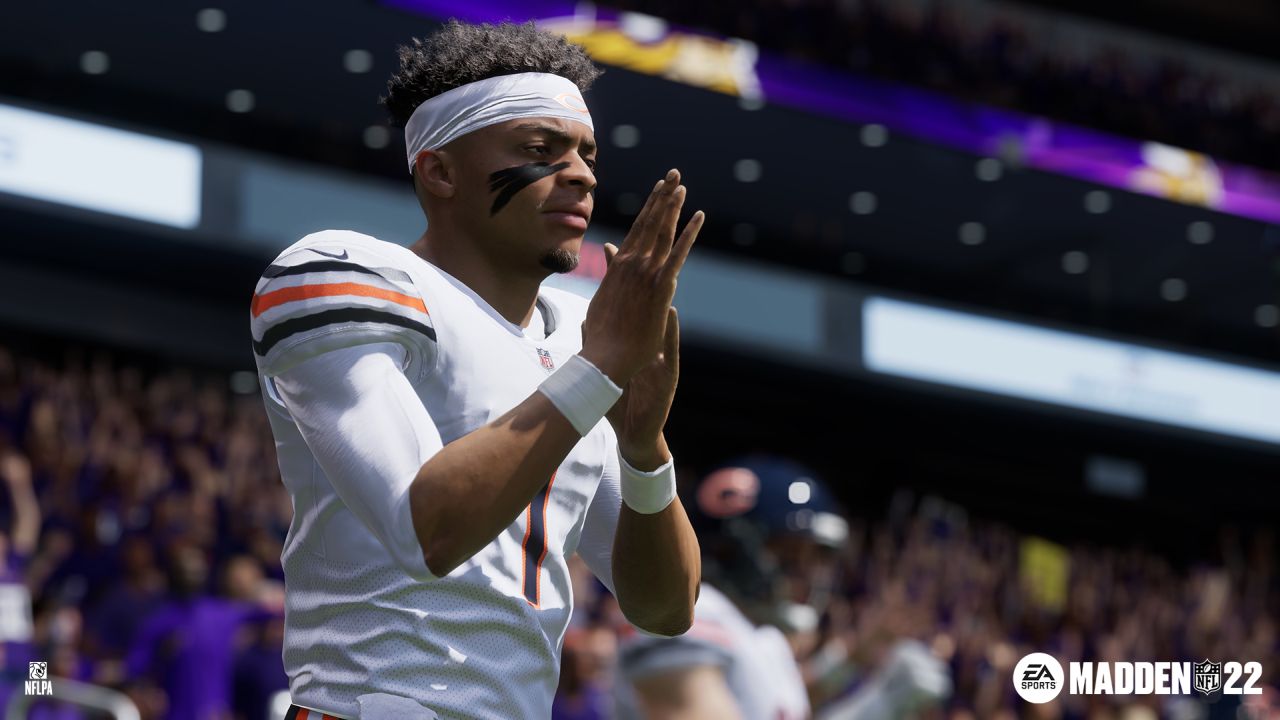 These animations aren’t without issues, however. If somehow the development team could work on the consistency of how this works, then the game can reach its full potential. I’ve gone back and watched some replays and I’ve had a left tackle chase a defensive end on an inside stunt that made no sense, and I’ve had a running back get hung up on an offensive lineman while trying to field a screen pass. While the AI feels improved on defense and you’ll see guys make great plays that are realistic and not of the “Superman” variety, the zone defense is still an issue. Wide receivers on deep routes will still run right past the safety covering deep. Some plays will look amazing and others will leave you baffled, but the baffling part doesn’t seem to pop up as much. The AI also feels less scripted and doesn’t just march down the field. These are all steps in the right direction.

Besides the improvements in gameplay, the main single player modes have seen major overhauls. Face of the Franchise is the narrative mode that comes back for another year in Madden NFL 22. This focuses on the Path to the Draft, clearly taking a cue from the NBA 2K series. While there’s a story that follows the direction of your player to the draft, the focuses is on building a skill tree for a quarterback, running back, wide receiver and now a linebacker. You’ll play flashbacks from the College Football Playoff, but you will also take part in camp drills and answer interview questions to gauge your draft stock. Once drafted, you work your way up through the draft chart of a NFL team and career progress, such as unlocking Archetypes and fully shaping your player over time. This also carries over to your Avatar in the Yard. There’s also a three-on-three mode where players use their avatars. The narrative, itself, is lacking and took a back seat to the player development experience. This is a plus as the mode comes off more as a My Career rather than what the mode has offered in the past.

The developers listened to the large feedback involving changes to Franchise Mode. While some changes were implemented as a live service for the last year, the NFL season was over by the time these changes all made their way over to the game. Franchise Mode has been overhauled with a focus on strategy and development. Coaching skill trees have been added and this includes offensive and defensive coordinators. This helps shape your team over multiple years with the option to hire and fire coordinators if things aren’t working. Players can also create a coach and implement a backstory based on how the coach shapes a team. In between games, opportunities will pop up that allow coaches to talk to players, provide a boost to certain players and to the team. Weekly press conferences will instill challenges and other boosts to help with a storyline for your season. 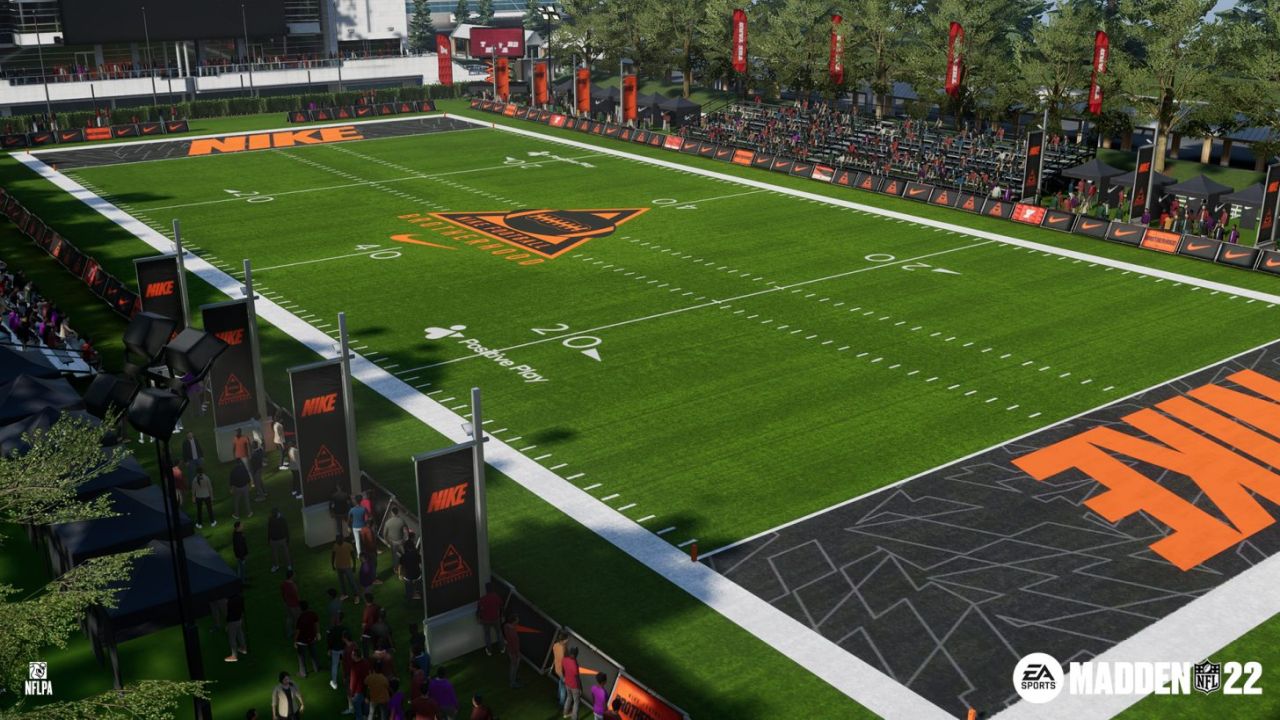 Weekly planning is the other major aspect thanks to those Next Gen Stats. You won’t need to practice on the field like you have in the past, but rather assign what type of practice to have each week while managing team fatigue. This offers enough to do throughout the season and doesn’t include the overhauled scouting option that’s coming in September. It would still be nice to have some sort of podcast, like Face of the Franchise offers, or some sort of video highlights to bring you into the season you’re playing. The overlay has been changed and there’s no longer the coach’s desk, but it still hides behind the interface as it will pop up for a second occasionally. The menus are nice and tidy, but some of the fonts are hard to read due to everything being small. The changes to Franchise Mode are at a surface level, but there’s quite a few changes. The new aspects aren’t overwhelming and they provide the much-needed changes the mode has needed for years. This Franchise Mode is the big leap that Madden desperately needed.

Madden Ultimate Team, The Yard and Superstar KO all return, but the modes basically remain the same. Each of these modes offer new challenges for players, but The Yard benefits from the gameplay improvements. The better responsiveness and controls allow this to feel like a better arcade mode. The Yard also has some new locations to play in. Ultimate Team remains the card-based money-maker for EA and the new challenges will provide something new for those players. Halftime adjustments can be made for Superstar X-Factors and the momentum meter and other aspects of the game will change how the mode is played, but there isn’t anything major. I don’t think there’s going to be many complaints as to where the focus went this year. 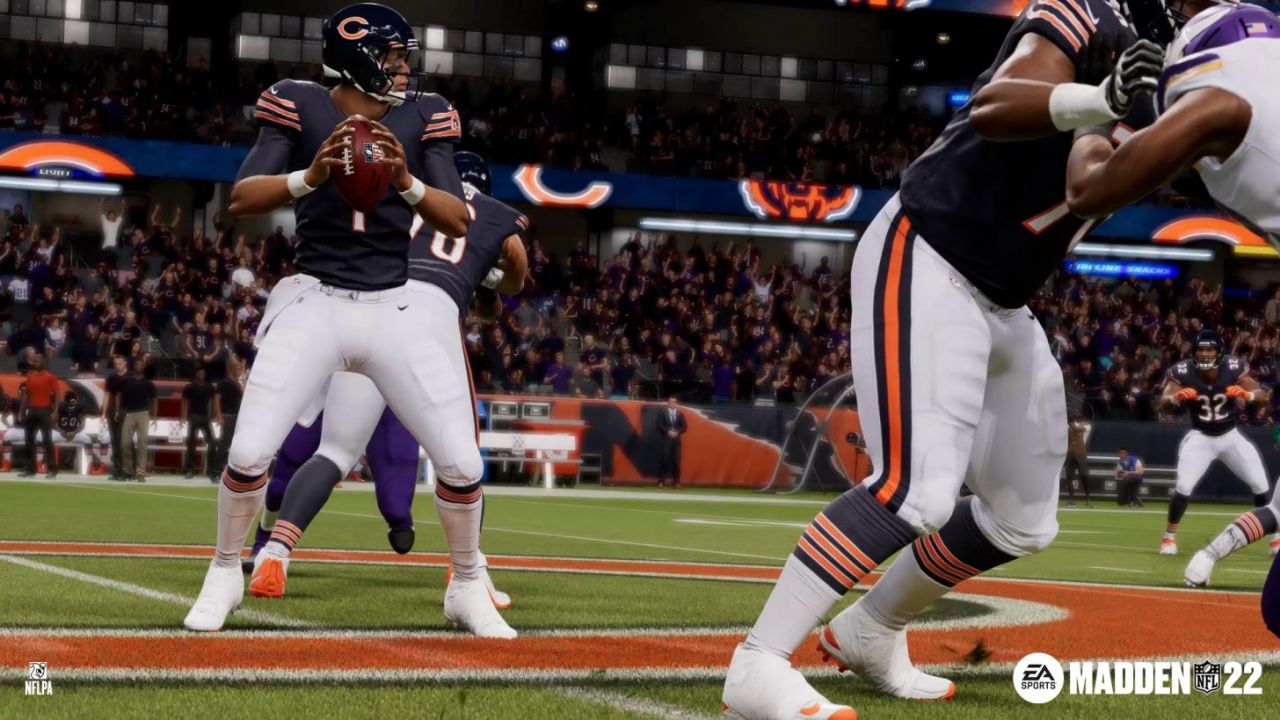 Madden NFL 22 continues to visually grow on the PlayStation 5 and Xbox Series S/X. Last year, better details and Ray Tracing was implemented. EA is offering two visual options for players with performance and graphical fidelity. While the graphical option mentions about potential slowdowns in frame rate, this was never an issue. The lighting seems to be improved this year and cutscenes look fantastic. The animations, in motion during the game, are fluent and the game just runs smooth. The presentation updates feel like a modern and fresh take on the NFL while keeping things serious. I still wish there were more player stat overlays, but the look of the presentation is nice.

Brandon Gaudin and Charles Davis are once again back for commentary duty. It’s time to start weighing options for something fresh or even the possibility of offering multiple commentary teams to the game. Some of the storylines entering this NFL season are brought across multiple times and as a whole they’re just not that interesting. The soundtrack sticks to the menus since this was removed from the stadiums in favor of the Gameday Atmosphere. The soundtrack will play during The Yard, but there’s a Spotify playlist to check out the music if you’re a fan. 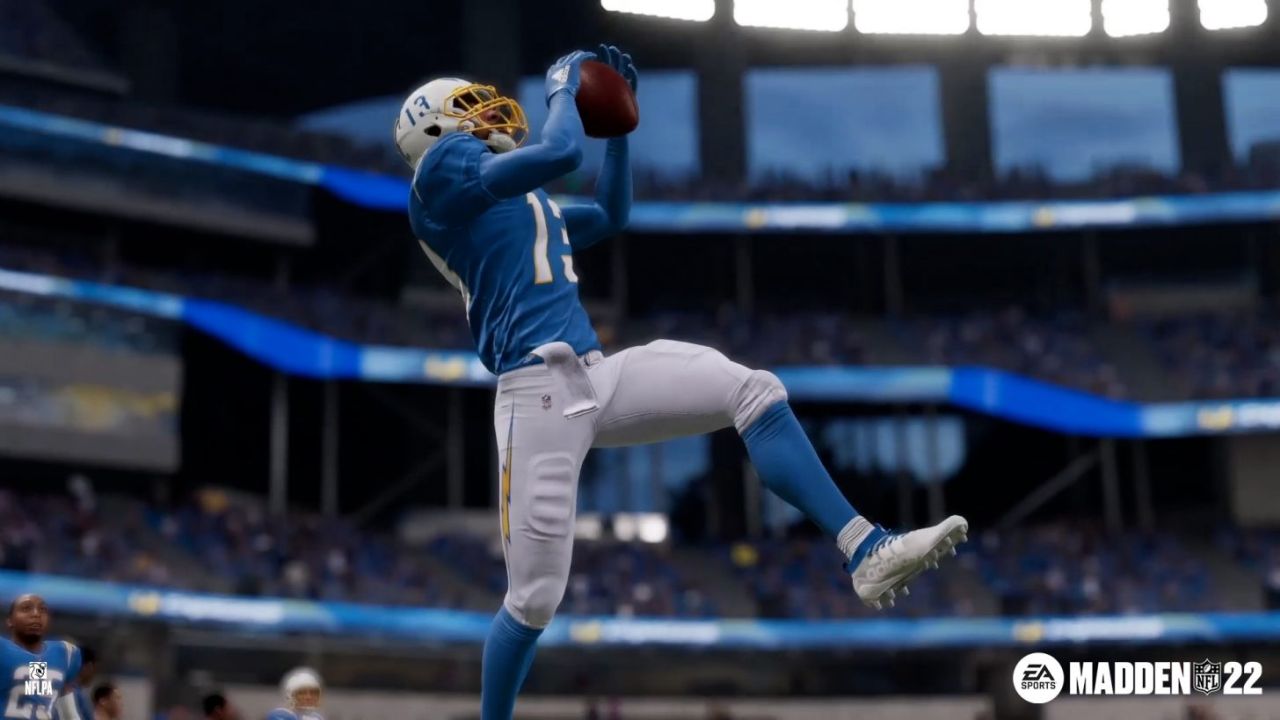 There will still be clickbait videos for Madden bugs out there because that’s a thing that exists. People will still complain about certain minuscule aspects of the game rather than focusing on the fact that new gameplay elements are added and Franchise Mode received meaningful updates. But regardless of all that, the Dynamic Gameplay makes Madden NFL 22 the true next-gen introduction for the series. Gameplay is responsive, fresh and fun, while adding strategy helps shake things up. The Momentum Meter is something cool to work towards and experience the different levels in different stadiums. Franchise Mode and Face of the Franchise Mode are the best that they’ve been in some time by adding new options and ways to play. The gameplay is still far from perfect, and I’d be interested to see how FIFA develops its machine-learning AI and if that would be accessible for Madden in the future. Hits can be brutally nasty using the Hit Stick and seeing different tackles, catches or sack-evading animations will leave you impressed.