You play as Jack, who’s trapped on the closed-off city of Jefferson Island, where the DeathWatch games have been set up, and are broadcast near and far. The object of DeathWatch is to claw your way to the top by any means possible. Gratuitous shedding of blood is encouraged, because otherwise, everyone else on this island will do the same to you. Visuals are kept a Sin City-style black-and-white to keep the mood as jovial and comedic as possible. This is for your own protection, as you’ll be doing everything from hanging people on meathooks, to throwing people in front of spiked trains, to ramming signs through peoples’ heads, to making human shishkebabs and tempura. Even given the limited color scheme, this isn’t a game for those with weak stomachs.

You’ll fight humorous bosses which are parodies of pop culture from throughout the decades. You’ll race through the city on a motorcycle, all the while knocking people off of their rides, slamming into aliens, and even participating in a vehicular wrestling match. You’ll dispatch foes with a score-based system which tracks how much gratuitous violence you inflict on said foes while they are still alive, just before finally laying down the big finish. You’ll explore multi-level stages full of devious death traps, begging to be used on everybody besides yourself. Finally, as if all this weren’t enough, you’ll take part in Bloodbath Challenges—arcade-style contests where you’re encouraged to kill as many groups of people as possible via singular themed methods. Never before have pastimes such as baseball, golf and darts been so cathartic. 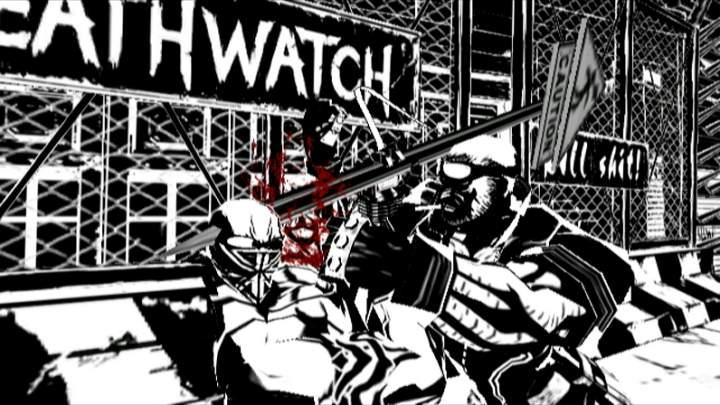 You’ll do it all to an inspired rap soundtrack surpassed only by the recent Afro Samurai game, and to announcers who deliver some vulgar, yet side-splitting lines which get repetitive only once in a while. As you maim, impale and disembowel the competition, you’ll uncover a conspiracy that could affect the current world order, and you’ll dish out your special brand of justice upon it—all while being a badass with a chainsaw grafted into his arm.

MadWorld is a fantastic game.

Unfortunately, seven to nine hours after starting it, you finish it, and you’re left with a $50 coaster.

Oh, there’s certainly some post-story content; you get a couple of extra breakable weapons, a Hard difficulty where absolutely no one will sit still for you, and you can compete in the hilarious Bloodbath Challenges with a friend. It’s still a coaster. This is sort of hard to explain because it’s a concept I’m still getting used to, but I’ll try my best. Bear with me.

You see, the way MadWorld’s game mechanics work is that, as mentioned above, certain scores are applied for certain actions done to enemies. Melee attacks and chainsaw deaths provide the least amount of points, because otherwise, nobody would take risks and go for the big flashy kills. Fair enough—except for the fact that the melee and chainsaw attacks are very basic, leaving no room for expansion. There is no way to, say, pull off more complex chainsaw or melee maneuvers or combos with practice; either to yield more points or visual satisfaction.

There are a couple of flashy melee finishers such as aerial chainsaw impalement or the human hammer throw, but even these net comparatively low scores. For a game with a basis in brawling, this is a bad move. What’s more, most enemies die very easily to such tactics, discouraging their use and rendering Jack’s chainsaw—one of his biggest selling points—utterly moot. The more you play the game, the more you’ll find out that it’s only good for slashing bosses and saving you when you’re surrounded, and even then the game will eventually slip in enemies that shrug off the chainsaw with shielding.

Let’s go a little further into the game’s scoring system. The next rung on the score ladder is mutilation. This is actions such as impaling someone with one of the game’s many signs, or tossing an explosive barrel or tire over their heads. To get big points, these actions must repeatedly be done before going for a flashy kill. The trouble here is that all signs look the same and do the exact same things. 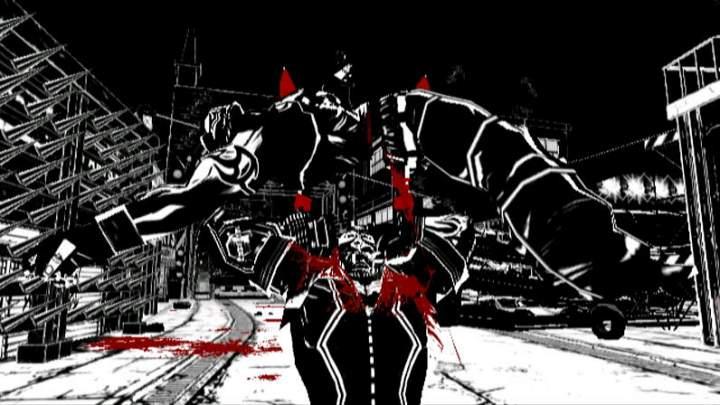 There’s no variety here. Slam one tire or barrel over a person and there’s little more you can do on that front (though there is the nice bonus of someone who’s been slammed with an explosive barrel essentially becoming a human bomb when thrown afterwards). You can impale a person with multiple signs, but that gets old so fast it’s not even funny.

Finally, we have the big stuff—the flashy instant death kills. Throwing someone into a dumpster lined with razor blades; the “rose bush” bed of spikes; making human tempura; launching people out of giant fireworks barrels. This is where we have the biggest problem, because aside from the “throw me in here” traps, every single one of these are quick-time events. True, they utilize the Wii’s penchant for motion input to add interactivity, but the same thing will happen every time. They are only good for novelty and shock value. Once the player has seen them, there’s no variation, no way to improve on them, and since they’re the only path to big points and big spectacle, the player will be seeing a lot of the same thing without actually taking part in it. Technique increases in small amounts when Jack is given access to weapons such as spiked bats, torches and katanas, but these will break after a certain amount of uses, leaving the player back at square one. The iffy camera and slow enemy carrying speed doesn’t help matters one bit.

In other words, there’s little way to experiment with or break MadWorld’s formula for extra enjoyment outside of the game’s main story. There’s nothing new to try outside of maybe your basic no-death speedrun. The entire game revolves around QTEs. Imagine if this game was on the PS2, controlled entirely by buttons, and you’ll see where I’m going with this. Dead Rising beats MadWorld at its own game. There are a couple of times when PlatinumGames shows a spark of their old selves: the final stage, for example, is lined with bumpers that Jack can throw people into, and watch them bounce around the stage like pinballs until they inevitably end up in some waiting slicers. It’s thus immensely fun to set up bank shots for personal challenge. Such moments, however, are few and far between.

MadWorld’s fatal flaw is that there is nothing to accomplish. There’s no sense of exploration or discovery to be had, anywhere. There’s nothing to strategize, nothing to teach. Wii Sports has more depth and value than this. You can play Wii Sports over and over again and find that you can always get better at it, motivating yourself to return to the game, or fueling competition and cooperation with friends. With MadWorld, once you know how the deceptively restrictive scoring system works, and have taken in the shock value of all the admittedly inventive deathtraps, this game’s value drops to nil—and neither takes long to happen. As a longtime fan of Clover Studio’s previous games, none of which followed this philosophy (outside of, perhaps, the much meatier Okami) I find this to be a gigantic disappointment.

Did I call MadWorld “a fantastic game?” Scratch that. MadWorld is a fantastic interactive movie.

This is the worst sort of tragedy—where a great concept is doomed to be quickly consumed, then tossed to the side forevermore because it was ultimately all style and no substance. Once MadWorld ended, it was to my extreme heartbreak that I found DeathWatch all sorts of boring. I wanted more in the worst way, but there was no more to be had. Ease of use as a foundation is one thing; never building on that foundation is quite another. Controls should be crafted for ease of use in allowing the player to lay the smackdown, not for ease of use in allowing the player to view mini-cutscenes of them laying said smackdown. The majority of MadWorld’s selling points and big fun moments are passive entertainment. The 2-player BloodBath Challenge minigames fare a bit better in this regard, but those alone hardly justify the asking price. 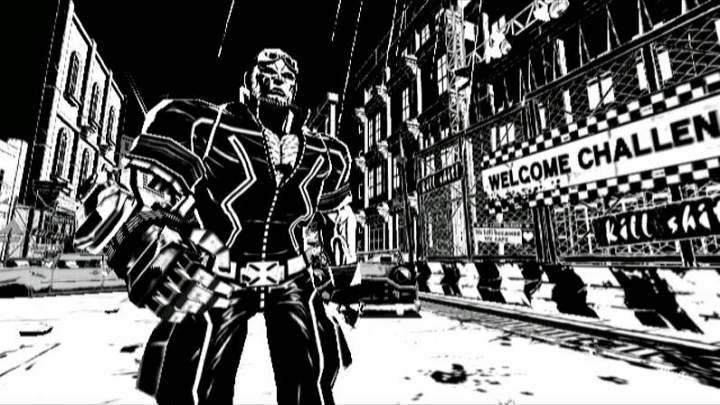 The good side to all of this is that PlatinumGames clearly has the Wii’s intricacies under their control. For a game with such fast action, I had little difficulty maintaining control outside of a couple of directional swings being misread. I just wish all of this fast, responsive action meant something. I enjoyed MadWorld when it was fresh, but it’s so sad that I can’t enjoy it more just as I’ve gotten to know it.