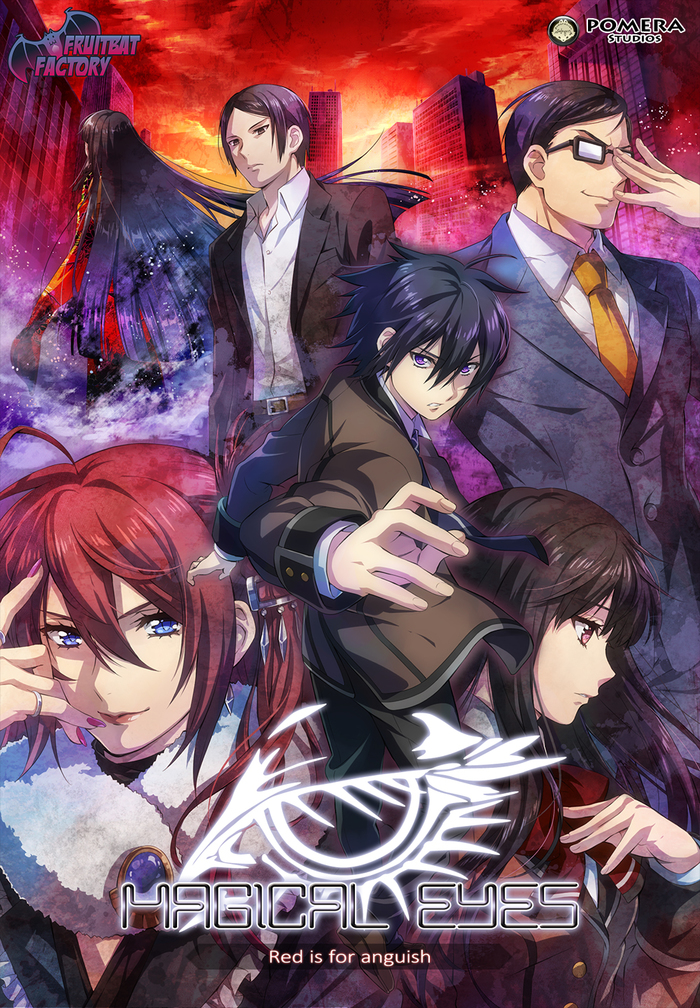 Magical Eyes – Red is for Anguish

Tired of romantic visual novels? It seems that many on Steam feel the same way. Murder-mystery focused games such as Danganronpa: Trigger Happy Havoc have been entertaining PC users recently and soon Zero Time Dilemma will be gracing their presence. Even though the genre has always had a vast array of games to suit various tastes, it’s getting a big burst of interest from the mainstream when it subverts their expectations. As such, Magical Eyes – Red is for Anguish may have just launched at the perfect time. This visual novel tells a story which begins on an incredibly dark – and weird – note. The owner of a furniture store was simply wrapping things up late at night when he finds himself attacked. In the end, the man survives, but not before his arm has been chopped clean off. According to his testimony given to the police, the assailant who carried out this disturbing act was a Japanese doll in a kimono.

As might be expected, the police really don’t know what to think about this explanation from the victim. That’s when they turn things over to an equally strange organization known as the Disobeyers. This class of people might be best compared to something like superheroes. Although they certainly don’t wear silly spandex outfits, they do possess powers beyond that of normal people. Powers might range from super speed and inhuman combat skills to armored skin. Fortunately for them, the Disobeyers look like like everyday folks so there’s little issue with them lurking throughout Japan. The story of Magical Eyes – Red is for Anguish follows these men as they work to solve the mystery behind this strange attack. Of course, as the truth slowly comes to light things will only become weirder.

Despite an ensemble cast, players spend most of their time split between two characters: Yuu and Chiharu. Yuu is one of the Disobeyers, while this young woman is simply a high school student who happens to be friends with him. This story is split between scenes from both their perspectives, as well as a third secret viewpoint. All together, this keeps things quite dynamic and interesting as players attend to different parts of the story as they intersect. It’s important to note that the storyline also appears static, meaning that no matter what each player receives the same ending. The only differences that might occur is in the form of extra scenes which can be unlocked if you perform well in Reasoning Mode. 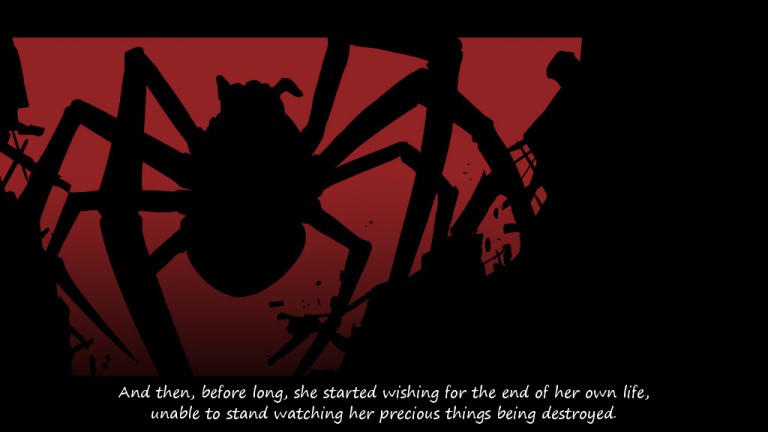 What the heck is Reasoning Mode? Okay, so it’s honestly a lot like a pop quiz to see if you’re paying attention to the story. That might sound super dull, but it actually is a fun means of keeping players engaged throughout the chapter. It makes sense given that Yuu is basically a lot like a detective, too. During these segments players are presented with questions relating to the crime and asked what is “known” about them at the moment. Your job is to select the best answers to help Yuu figure out exactly what’s going on as he and the other Disobeyers get closer to solving the case. Getting all questions right confers the award of an additional scene each time. Other goods are unlocked as well, but only a perfect score grants these extra tidbits of storytelling. My suggestion is to save every time that Yuu enters his room as this is generally where Reasoning Mode pops up. That way, you can always retry if you flub one or two questions.

Although I’d love to spoil everything about the story right now, as I seriously enjoyed it, Magical Eyes – Red is for Anguish does have much more to offer than a great tale. There’s also the matter of how high quality it feels in both the visual and audio department. Many more modern releases fall flat in at least one of these categories, but that’s not the case here. Visually speaking, the anime artwork looks darn professional. Both the sprites as well as battle-focused CGs are terrific, even if the sprites aren’t using fancy new things such as E-mote. Battle scenes in particular really evoke a sense of power and drama as they pop up during pivotal moments. The only negative in the visual department is that backdrops appear to be 3D graphics and look really odd behind drawn sprites.

Audio in regards to both the soundtrack and voice acting is also top notch. It’s a shame that protagonist Yuu is unvoiced, but everyone else gets a skilled voice actor to assume the role appropriately. Voice acting is all in Japanese, of course. As for the music, it is some of the best I’ve heard within a visual novel for some time now. Each and every song is awesome right from the opening video. The soundtrack is creepy when it needs to be, active when there’s something intense going on, and mellow as required. It would have been a super smart move to add in the soundtrack as part of the main game download or as an additional purchase option. The music is seriously that good. 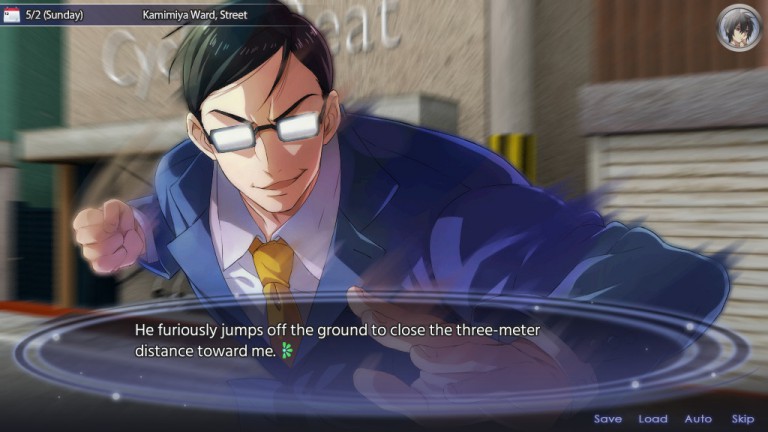 There are a few issues with the visual novel, of course, as nothing is perfect. For one, the translation/localization seems a bit odd at times. Maybe it has to do with the fact that this game appears to just be written with a really sly sense of humor throughout. Sometimes characters’ wit seems strange in a way which clashes with the rest of the writing. That could just be me, though, as there don’t appear to be typos or glaring grammatical issues which would be a much greater concern. Another matter which may bother some is the fact that Magical Eyes – Red is for Anguish is not that long at all. I’m considered to be a relatively fast reader, but even taking the game at a leisurely pace took me around just four hours. This is a far cry from the 10-15 hour estimates from the developer and VNDB. Some people will certainly take that time to beat it, however.

Please also note that Red is for Anguish is just the start of the Magical Eyes series. Although not noted anywhere on the Steam or Playism pages, the game is expected to continue with new chapters in the storyline. The next will be Indigo Blue Heaven (which has yet to launch in Japan). Presumably, each of these new chapters retains the same cast of characters but gives them the task of solving new, weirder mysteries. It’s just a shame that the entire series wasn’t already complete as that just means we’ll have to wait even longer to get our next fix. While Red is for Anguish clears up the doll mystery, you’ll still be left waiting on other story threads to evolve and resolve. It was honestly a little disappointing to discover this was a series after having no expectation/awareness of this beforehand. 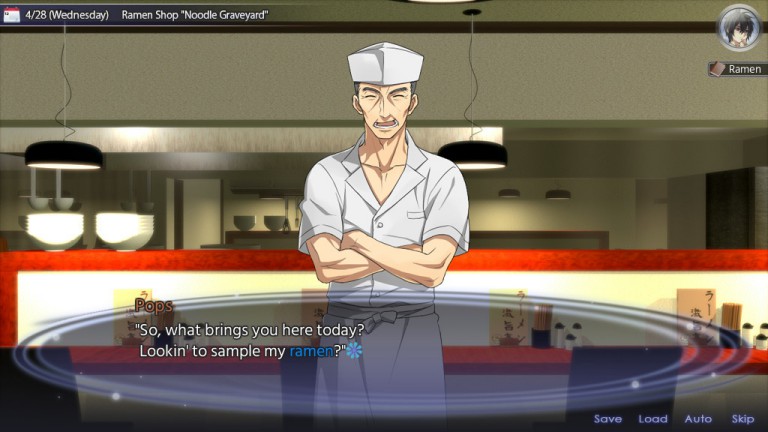 There’s so much that Magical Eyes – Red is for Anguish gets right that it can be easy to overlook its shortcomings. Luckily, there’s no glaring issues to be found within. Once you get wrapped up in the mystery it is hard to stop reading before completing the whole darn thing. Occasional writing weirdness aside, the gameplay themes, soundtrack and artwork work together in a way that lifts the experience even higher. It’s a shame that we can’t get even more Magical Eyes right now, but it’s safe to say that there will be many new fans such as myself waiting impatiently for Magical Eyes – Indigo Blue Heaven.