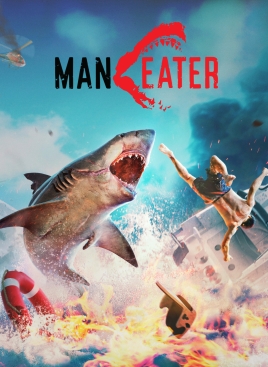 There are some ideas that always make for appealing video games and one that everyone seems to love is the idea of a game where you play as the antagonist in a virtual horror story. Be it hunting down friends in the asymmetrical multiplayer of Dead by Daylight or even utilizing strategic slasher moves in a puzzler like Slayaway Camp, sometimes being bad (in an artificial environment, at least) feels good. And for those of us who want to create their own SyFy Jaws knock-off of the week, that’s where Tripwire comes in with Maneater. A chaotic action-RPG game about terrorizing an entire Gulf Coast city as a killer shark, naturally complete with chomping down on several humans. Does it have enough bite, though?

Set in the fictional Southern city of Port Clovis, Maneater follows the story of a young bull shark, ripped out of its mother and chucked into the bayou by one Scaly Pete, expert shark hunter and the current star of Shark Hunters vs. Maneaters, a basic cable show covering the game’s events. Desiring revenge on Pete, you control the pup, devouring anything in their path that allows them to grow stronger, grow up and grow larger, and even evolve, making them enough of a threat to call out Scaly Pete and demand justice (justice here involving flesh being ripped apart by several teeth, but justice nonetheless). Meanwhile, Pete himself is dealing with his own family issues due to his visiting son Kyle, as well as being obsessed with the supposed megashark that ate his dad and drove him into this hunt.

Before I continue, I should point out that Maneater is an experience where the cathartic fun easily overrides a good chunk of flaws, be they minor or major. And why shouldn’t it? Once you get the hang of the controls (a controller is recommended), swimming around and enjoying a buffet of various sea creatures plays like a dream (save for some awkward lock-on controls at times). Once a creature is in your crosshairs, it takes a simple button press to begin a lunge that leads you into a feeding frenzy. Evading attacks is also smooth and nicely requires good timing, breaching the surface feels nice and satisfactory, and even whipshots that allow you to fling smaller enemies at other targets can be easily executed. So even just swimming around and causing mayhem results in a hefty amount of fun. 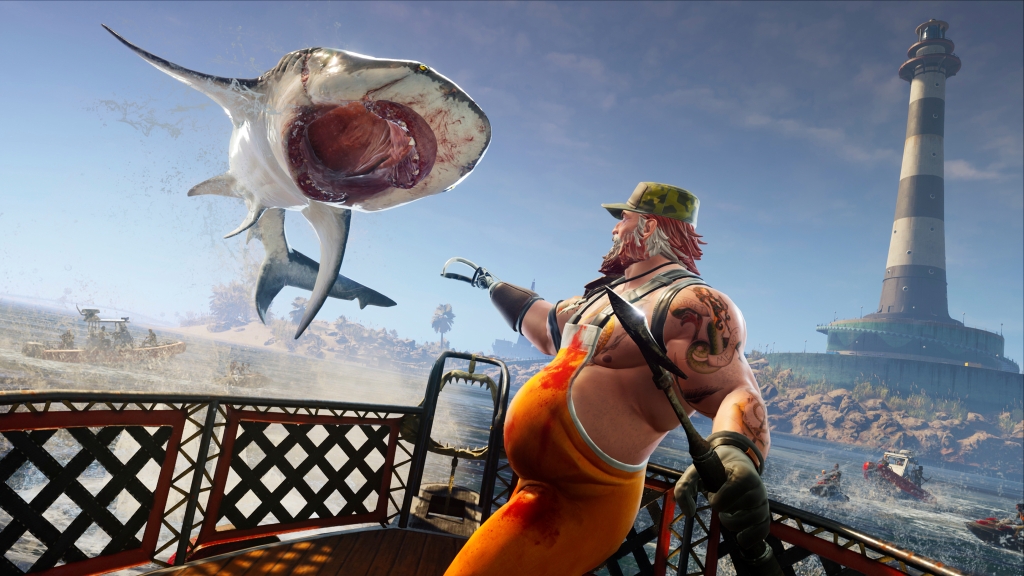 There wouldn’t be much fun if this world didn’t have a lot to check out, though, and Maneater doesn’t disappoint there. Port Clovis is all decked out in various colors and environments, from the sickly green bayou with industrial piping to the gaudy neon-lit tourist traps, golf resorts and beaches that it’s composed of. And this is just the surface, mind you. The waters beneath provide nice chunks of color all over, be they in bio-luminescence, chunks of coral or even debris floating around. Honestly, the pre-rendered screenshots shown so far — including the ones here in this review – don’t do it justice. You need to see the whole thing in action, especially with all of the various marine life swimming around.

Said marine life includes your prey, such as groupers, mackerel, seals and more…and then you have the predators. Alligators, swordfish and even other sharks like makos will be there for the hunt if they sense you. And they will be intimidating at first. I was shocked to see the starting alligators at Level 8, quite above the level of the mere pup I was controlling at the time. Yet Maneater is surprisingly fair with the challenge level when it comes to tacking larger-level enemies. I took down the aforementioned alligator while I was at Level 4 thanks to a combination of bullfight tactics, careful maneuvers and lunging away to devour any nearby fish for health. It was nice, challenging and never felt like a hassle, unlike many other games with over-leveled enemies.

In fact, there’s a large variety of enemy levels throughout the game. Even in the final areas, I still saw Level 1 and Level 3 creatures swimming about. And this is due to one of Maneater’s biggest strengths, that being a nice, large, and most importantly, accessible open world. Once you exist the bayou, there’s nothing stopping you from making a beeline towards every other region in the map, finding and activating the grottos in them that serve as fast travel and scoring some collectibles across the way (though a few gates containing secrets are still locked off until you’re large enough to ram them), maybe even grinding in tougher areas to level up quicker. It really does create the feeling of a living, breathing undersea world that you can carefully travel in and enjoy, which is admirable. 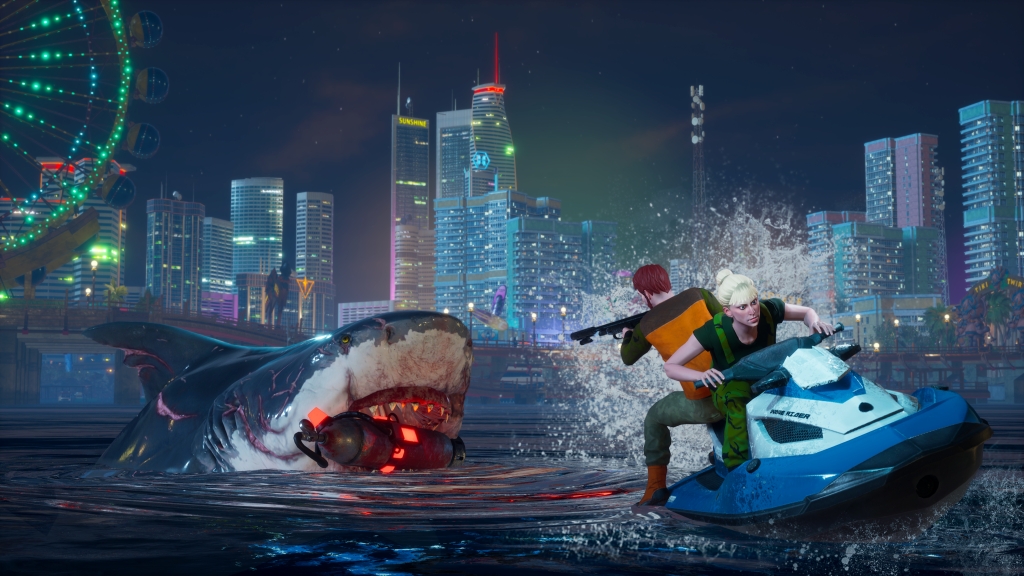 Also there to admire is Chris Parnell as the in-universe TV show’s narrator. The Archer and Rick and Morty veteran just has the perfect voice for a cheesy show like this, blending nerdiness and snarkiness in a perfect manner as he doles out facts on marine life and details about Port Clovis, each with humorous twists, all without feeling too repetitive (well, except for when you find nutrient caches, as there are over seventy of them). The best parts come when discovering landmarks all around and above the sea floor, which range from skeletons of a romantic couple apparently now used for selfies to local art sculptures made of trash and even pop culture nods (of course you can find a pineapple under the sea at one point). The only downside is that there doesn’t seem to be any gallery that you can easily view them all in afterwards.

And there is a point towards hunting down landmarks, as well as hidden license plates and nutrient caches. Doing so rewards you with experience and nutrients (as do various creatures you eat), the latter of which are used to upgrade the various Evolutions that you unlock, either through the story or completing various objectives. Yes, you can actually evolve your shark in various ways. Want to increase their sonar’s range to find more? Done. Want to be amphibious and be able to survive on land for longer, perfect for beach attacks? You got it. Do you want bio-electric teeth that stun, shadow fins that can poison enemies or bone armor that makes you tougher? Heck yeah! It all makes combat even more fun, especially when it comes to attacking hunters that appear GTA-style after you’ve caused enough carnage. Defeat enough of them and their bosses, your Infamy level goes up, and they become a stronger threat. At which point, you’ll have unlocked enough bonuses in order to truly feel like a SyFy monster of the week. 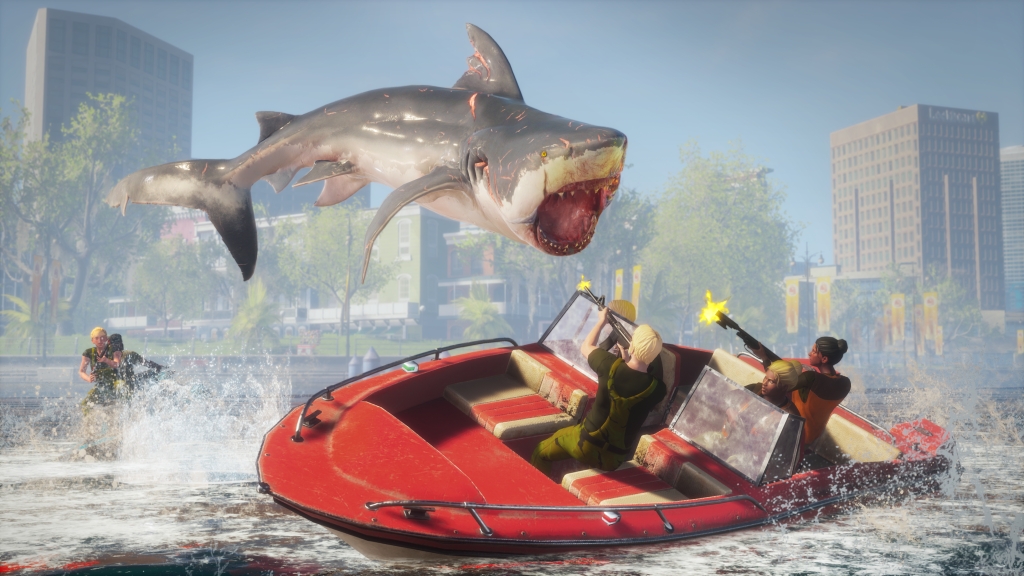 Of course, SyFy films aren’t perfect (to put it lightly), and I mentioned back at the beginning that, jawsome as it is, Maneater still has flaws both minor and major. The minor stuff tends to be more nitpicky, though, and likely comes down to a matter of opinion: Some moments of combat can feel a little reliant on button-mashing, some combination of upgrades can feel a bit overpowered, and there are the occasional moments that feel like bugs, such as boss characters somehow beaching themselves. When in the heat of it all, though, those moments just fade away as little niggles. What isn’t a little niggle, though, and instead is one of the truly major flaws that holds Maneater back, is how the story missions can feel too formulaic at times.

It doesn’t seem too iffy at first when you’re just swimming around, getting used to everything, exploring and making good use of the open world in general. But after a few regions, the patterns get repetitive. Every chapter seems to go like this: enter the new region, find the grotto, unlock a Revenge mission where you devour a certain amount of humans in a certain place, an Overpopulation mission where you devour certain types of animals in a certain place, and a Hunter mission where you have to kill a high-level version of a regular enemy. Then unlock more Overpopulation missions, complete them, and the apex predator for that region comes out for a boss battle. Defeat them, watch cutscene, advance to next region, repeat. 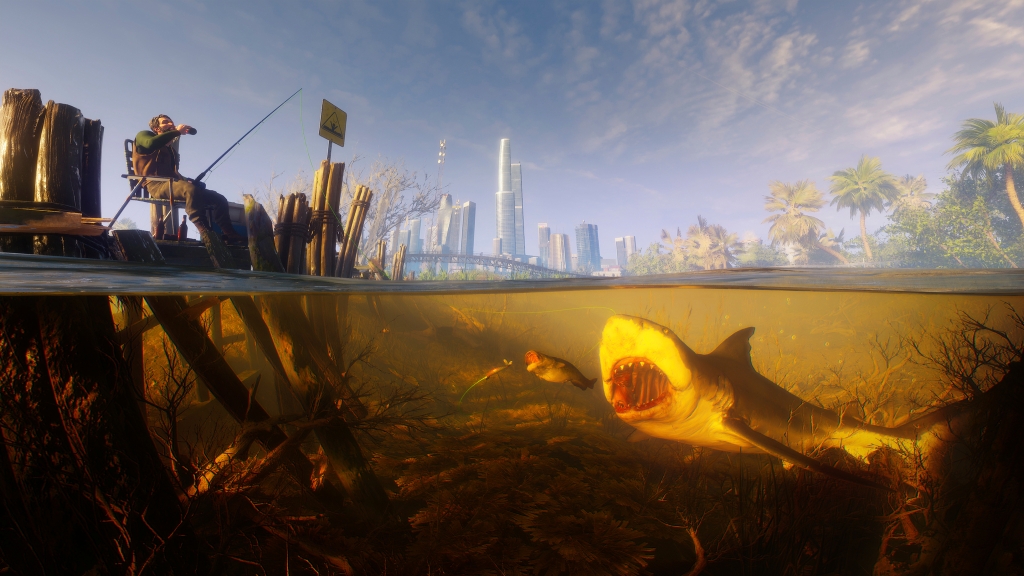 It does get slightly tiring after a while, even with Parnell providing more quips after each success. The side missions aren’t much of a help, since they’re just more of the same three types of missions. I know this is an open world game, but Maneater may be a little too reliant on using its open world to make your own fun at times. Even causing massacres that attract hunters isn’t required until a certain point. The world of Port Clovis is fun to play in, but it could still use a little more variety (and more story cutscenes with Pete and his son, which appear sparingly).

Not helping things is that the repetitiveness reveals itself when Maneater sadly comes down with a case of – as Yahtzee once put it – the “Shinfles,” AKA…well, I can’t say his exact full definition for language reasons, so let’s just go with “Lousy Final Level Syndrome.” After tearing our way Port Clovis’ first six areas, the final showdown occurs in the Gulf (albeit after the previously-mentioned moment where a minimum Infamy level is required, which may lead to grinding). Now, on paper, setting the finale in a large ocean for a massive showdown looks good on paper, but the execution doesn’t come through. The bright and gleefully tacky tourist traps are gone, and so is any ocean floor lit up with various natural lights. Instead, save for a couple of sights, it’s just deep, murky waters, which is meant to come off as intimidating, but isn’t.

And without any additional flavor being added to the world, the last few Overpopulation and Revenge missions just feel tedious. Even the addition of supposedly deadlier enemies doesn’t help much. I mean, the apex predator at the end was twenty levels above me (if only because the player’s level cap is thirty), yet the fight sure didn’t feel like it was challenging. There’s an entertaining final boss afterwards, but it still just feels like a so-so end to a game that was way more exciting than its conclusion, and thus deserved much better. 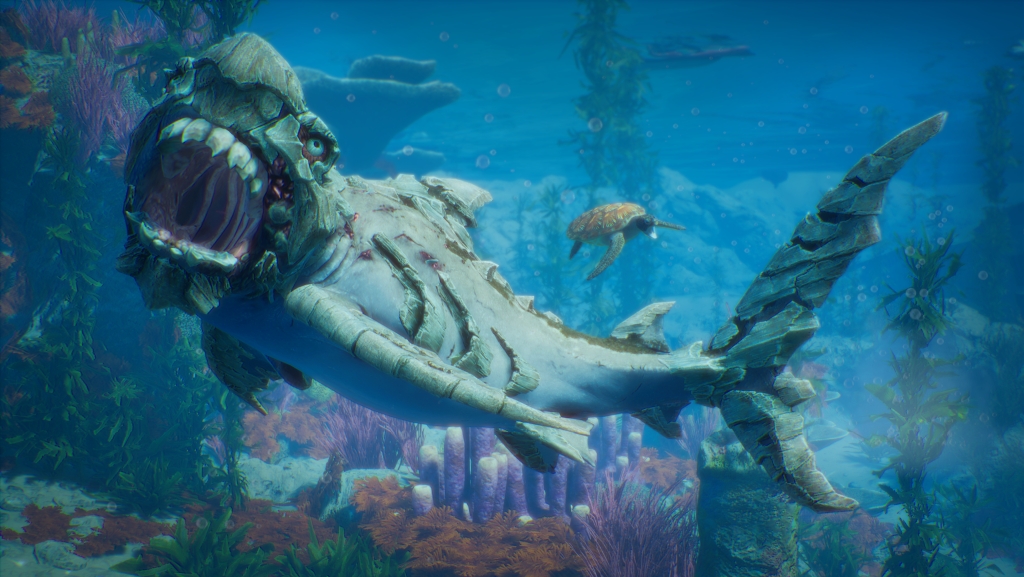 While its story missions and their variety can be improved upon, especially when it comes to the endgame, Maneater is an absolute blast. The open world is beautiful, captivating and inviting for players of all kinds, the combat is incredibly fun, and it has a nice and sharp bit of humor to it as well, reveling in just how much the people of Port Clovis are obvious jerks…which only makes it more enjoyable to rip them apart, of course. It might not be on par with the likes of Jaws, but what we have here is still one stellar b-movie to gleefully go nuts in. And sometimes, that’s really all you need in order to help live out your monster movie fantasies.