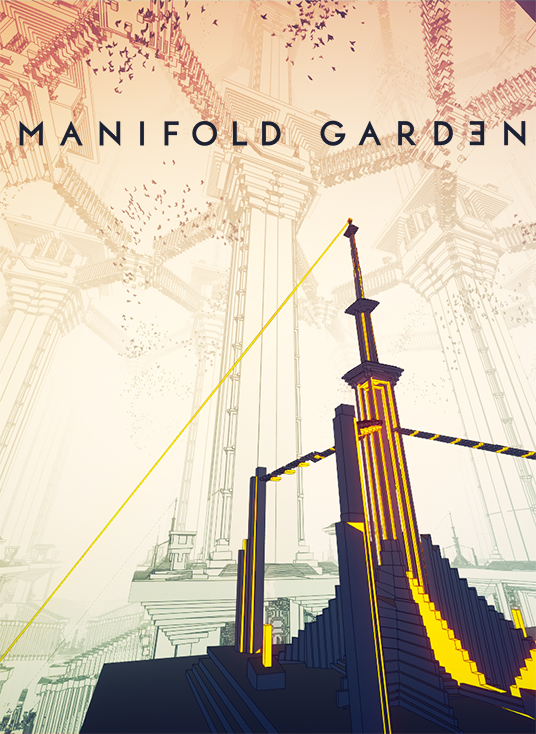 There’s no such thing as a garden that’s complete.  It can be left untended, sure, but otherwise a garden is an endless task of revisions.  This is as true for multidimensional ones as it is for terrestrial, and it seems that whatever created the intricate, mind-bending dioramas of Manifold Garden has left its creation to decay.  Something black and wrong has grown throughout the structure, and while the buildings are as pristine as the day they were made, the tendrils of darkness have started to take over.  Much like mold it’s more a passive threat than an active one and the garden merely needs a little care to spring back to glorious life.

While the garden’s creator may be a multidimensional being able to ignore physics and spatial logistics at will, you are mostly human and have to deal with fixing things the old-fashioned way.  Hands and feet are your primary tools, but thankfully gravity is only a relative concept.  It’s always there, keeping your feet stuck firmly to the floor, but the definition of “floor” is any one of the six primary directions.  Walk up to a wall, click on it and it’s now instantly the new floor.  All the surfaces in the game are up, down, left, right, forward or back, no non-right angles to be found, and every single part of it can be traveled over.  The tricky part is that, while gravity is whichever way you can flip it around, the fruits of the garden’s trees come pre-oriented and only change their perspective in special circumstances.

It all starts simply enough, though.  Standing in a cubic room everything seems plain, with the only hint of the self-contained infinities ahead being from the view through the glass floor.  There’s a set of stairs leading unhelpfully into a blank wall, and high on the ceiling is a door connected to a pedestal with a red switch wired to it.  Anyone who’s played a game at any point in their life knows where to go, and the minimalist tutorial politely shows the icon for the space bar when you walk into a wall.  One quick tap and the wall is now the floor, and a second time to make what had started as the ceiling become just another surface to travel over.  Click switch, open door and a short series of hallways leads to the first puzzle and a hint of the spacial contortions to come. 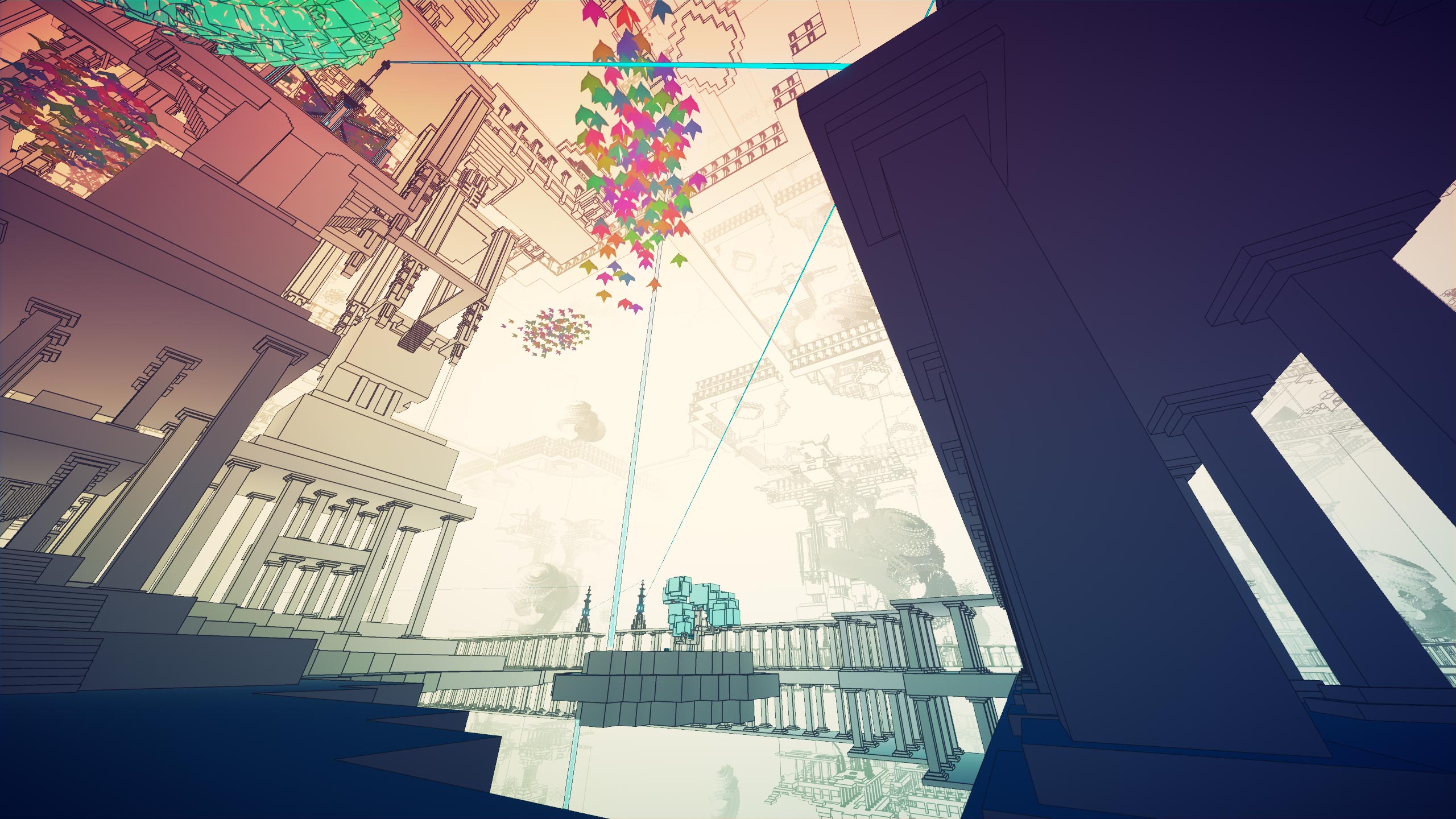 A decent-sized room has two doors on the far wall, each leading to a colored pad on the ground.  The cubes on the walls are color-coded but also immovable until you’re standing in the same orientation as the surface they’re attached to.  Once you rotate the world anything not cued to work on the new surface freezes solid, turning mostly white to indicate that, no, it won’t be moving again until you get back on the floor like a normal person.  It doesn’t take long for puzzles to show up requiring a cube to be stuck to what’s now the wall, using it as a platform to place another cube on top to activate a switch.  After a few basic rooms, mostly glorified boxes, the door to the outside reveals the level so far is a single modernist structure hanging in space as the shape of the universe unfolds.

Manifold Garden is about several things at once. The gravity-flipping mechanic makes for clever puzzling but also allows you to thoroughly explore every nook and cranny of its ever-more-intricate architecture.  Each building exists in its own tiny universe, a set-piece that extends forever despite its relatively small size.  The structures repeat endlessly in all six directions, some floating and others connected to themselves, making for deeply impressive environments to wander about.  While the puzzle-solving is the gameplay hook, the real focus is exploring, just existing in each new area and strolling through towering hallways, cavernous structures, open courtyards and impossibly-connected paths.  Each building exists in its own repeating universe, and they’re all connected by paths that don’t care much about spatial reasoning.  More than one hallway ends in a door that’s a nicely-framed portal to a brand new structure, and sometimes taking the left or right sides of an entryway with a pillar in its center can take you to two different places.

Despite all this plus the trees that grow cube fruits, streams of water the cube-fruits can redirect towards waterwheels, building-size tetronimos that need to fall in just the right spot to make a power connection, and multiple variations that use all the elements together, Manifold Garden is a straightforward bit of puzzling from start to finish.  Except for the side-paths, of course, because every garden worth its vegetation needs hidden routes.  The main path is sometimes tricky but never overwhelming, aside from a few areas where it plays hide and seek with the switches, while the side routes are a little more devious.  It’s hard to know which closed door means you missed a secret and which will be used later but that’s what replaying from the start is for.  Otherworldy interdimensional architecture-gardens have their secrets and it’s a beautiful enough place that it easily warrants a second bout of exploration. 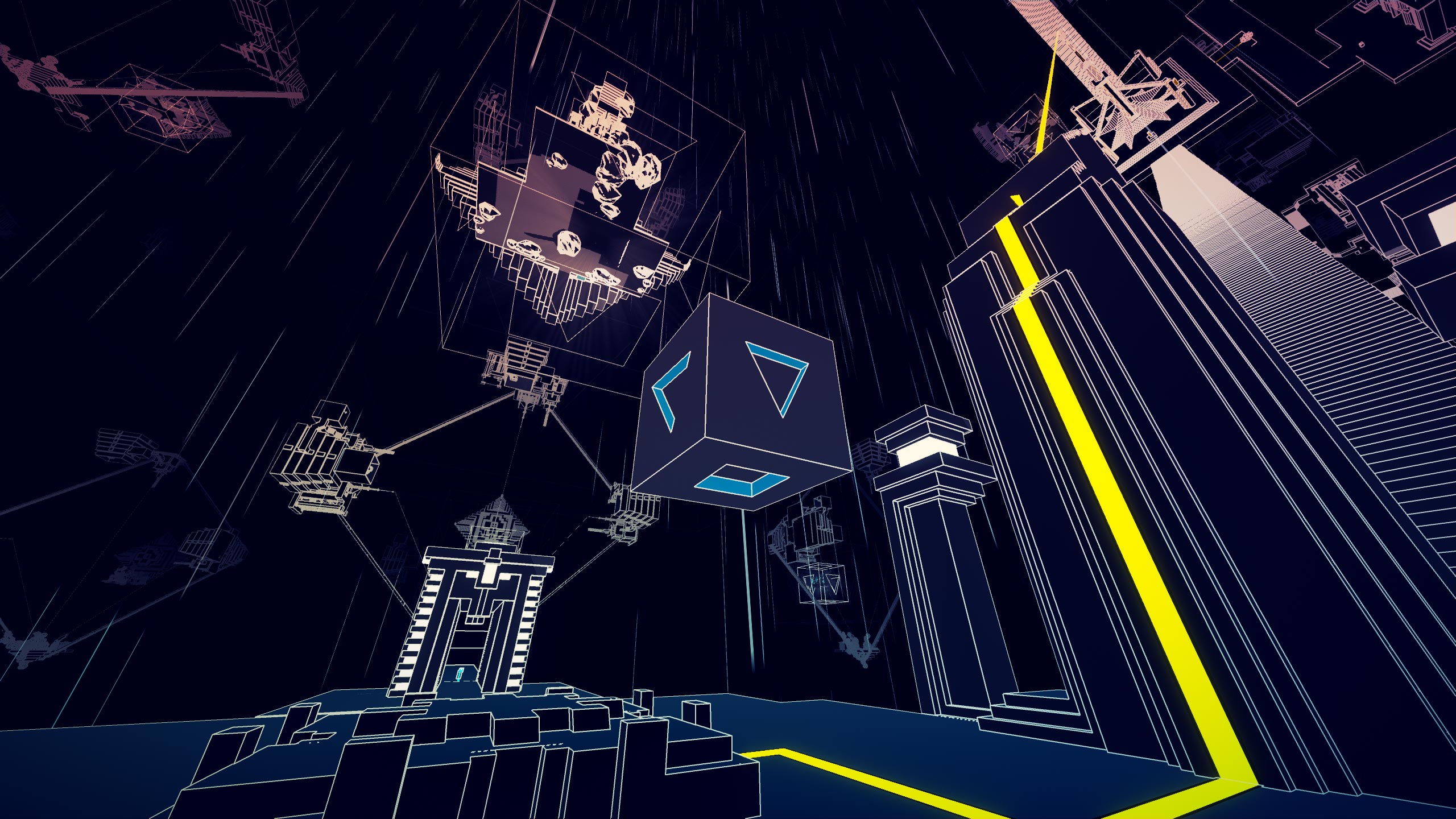 Manifold Garden is an incredibly stylish first-person puzzler, like walking through the architectural drawings of a pandimensional designer.  Some of the individual rooms are a little too sterile for their own good but these are always followed up with incredible views that stretch out forever in geometrically pleasing patterns of infinite repetition.  The tendrils of darkness overrunning the garden are a passive threat at their worst, leaving you free to explore and experiment, flipping the world around to see it from a new perspective.  The garden may have seen better days but chasing away the darkness is just the excuse needed to take it all in, solving its mysteries and coming to grips with a creation that only follows the rules of 3D space when it feels like it.