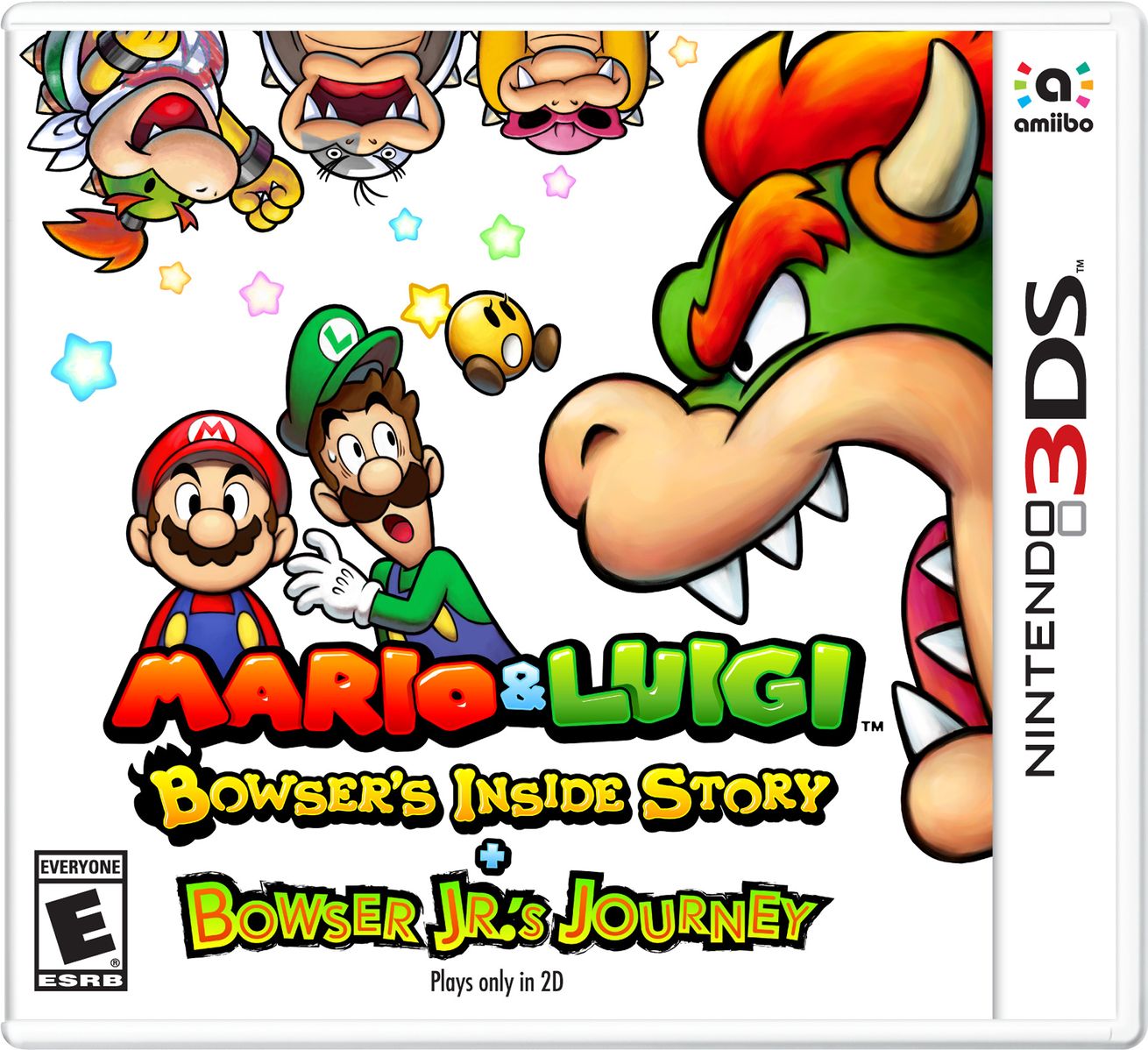 In 1996, Mario made his first debut into the world of turn-based RPGs. Following this he saw adventures made of paper and finally got to team up with his brother in the first Mario & Luigi title on the Game Boy. What followed was a good number of sequels and a remake of the first two years ago, which brings us to the remake that is Mario & Luigi: Bowser’s Inside Story. Originally the third entry into the series, it takes a different path and this time doesn’t just focus on the bros themselves, but instead the iconic king of koopas himself seen throughout the series. The question is just how well does it hold up after nearly ten years and does a new coat of paint and content make it worth diving into?

For those unfamiliar, Bowser’s Inside Story begins seemingly like any other day in the Mushroom Kingdom. Toads of all kinds are enjoying a pleasant morning when tragedy suddenly strikes the innocent fungi citizens. Toads have inflated more than ten times their normal size, and are bursting from the seams and out of their houses. It’s soon discovered that they have caught a deadly disease called the blorbs, and the kingdom must gather and decide how to deal with this. Discussions seem to be going well between Peach and her many toad citizens before Bowser decides to come along uninvited. Fortunately the Mario bros are there to save the day and send him on his way, but not without making him a little more than upset. As Bowser tries to plot on how to get back at what has happened, he stumbles across a shop selling mysterious shrooms. After eating one he’s been gifted by the suspicious shop keep, he loses complete control of himself and begins sucking up parts of the mushroom kingdom, including Mario, Luigi and even Princess Peach. Now stuck inside Bowser, they must figure out how to stop the blorbs and how to escape, while preventing the kingdom from being taken over by a familiar evil face.

As the third entry into the Mario & Luigi series, it’s familiar to the previous ones overall. The bros go into combat and take turns dishing out attacks, while doing extra damage with well-timed hits or waiting until just the right moment. The biggest change in mechanics is taking control of Bowser himself. Bowser is big, breathes fire and smash obstacles in his path with a simple punch. His turn-based combat is identical to the bros, wherein he can generally select either a good whallop with a fist or burn them in their place with his deadly fire breath. Unfortunately for Bowser, however, he’s not completely at full strength. At the very beginning Mario and Luigi are stuck inside of Bowser, but are able to actually help him in secret while trying to get him to go where they’d like at the same time. The two don’t always come into play, but the most prevalent time is during combat with Bowser when small enemies are involved. Early on Bowser acquires the ability to suck up small or flying enemies, which get sent down into his stomach. Unfortunately for Bowser they’re still alive and kicking, but luckily Mario and Luigi are on the scene to send them packing. 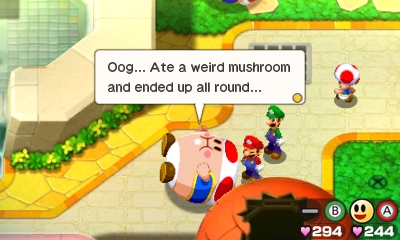 While normally battles will play out in traditional turn-based fashion, Bowser has a whole other element to him which makes a brand new unique style of battle. Every now and then, Bowser will have a bit of an accident that he seems to have been knocked out cold from. In response, Mario and Luigi struggle to wake him up to his old self, but instead bring on something new. After one of the many mini-games used to power Bowser up, the koopa king wakes up larger than life and steps into one of the giant battles. These giant battles play out in full 3D, with Bowser facing down an equally large opponent. These matches have Bowser firing fireballs, punching opponents and smashing his way in unique fights unlike anything else. The downfall to these matches is they can feel long, as the 3D animation is slow at times, but fortunately they aren’t frequent and manage to feel dynamic when they come around.

Outside of battles, the meat of Mario & Luigi titles comes from exploration and puzzle solving. As Bowser, players will go through the overworld and explore to find certain items or problems being caused by some sort of monster. Similarly inside of Bowser, Mario and Luigi will go through their own side-scrolling dungeons where they must delve inside his body in order to unlock new abilities or find surviving members of the Mushroom Kingdom. Later along in the story, the bros do finally get the ability to leave Bowser’s innards and explore on their own, but this is one of the times the game feels like it slows down. Bowser is an extremely powerful character, but in comparison Mario and Luigi seem weak and their larger boss fights feel as though they often take twice or three times as long to finish up. This wouldn’t be so bad if the boss enemies had move sets that mixed things up, but most have only a handful of moves to dodge and each fight quickly feels repetitive. Most of their exploration is also treading through places Bowser has already been, and it makes it feel like they should have just stayed inside Bowser and kept exploring there instead of leaving at all. 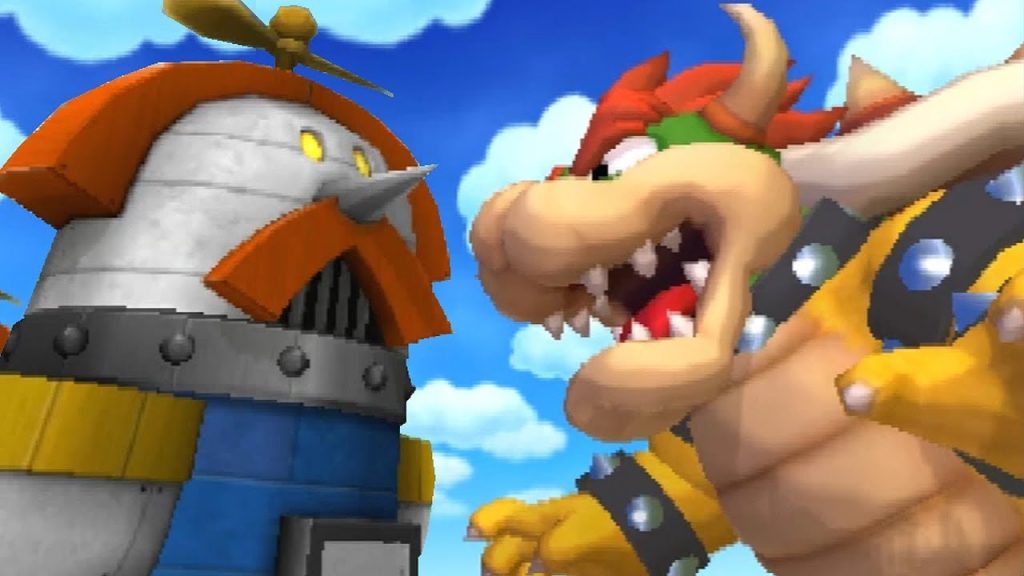 Two shining aspects of Bowser’s Inside Story is the appearance and sound. The world is full of color and simply looks amazing. While the original art style was charming for the late Nintendo pixel era, the stunning new shine on the 3DS remake sparkles in comparison. The soundtrack has also received a good number of remixed tracks, which makes for great tracks that while maybe not the most catchy, are great to just stop and listen to from time to time. One of its bigger downfalls is how long the beginning tutorial feels as it juggles between both the Bros and Bowser. Fortunately there is a way to speed things along, but a lot has to happen before it feels like there’s freedom to explore and do lots of backtracking along the way to find all the secrets. Like many recent 3DS releases from Nintendo, it’s also lacking in 3D functionality which is a shame given the 2.5D perspective which would look great if it popped out just a bit more like a real world.

While Bowser’s Inside Story didn’t receive a ton of changes outside of the visuals and some music changes, the real new content comes from the side story known as Bowser Jr’s Journey. Anyone who experienced the remake of Superstar Saga will likely recognize this mode, as it’s essentially the exact same gameplay, but featuring Bowser Jr this time instead of Captain Goomba. This is easily the weakest part of the remake, as while the story is a cute tale of Bowser Jr and the Koopalings going to find ingredients to cure their blorbed minions, it’s a poor example of what side stories should be. The gameplay is based around aerial, ground and ranged units who must be chosen based on the opponents in order to have the greatest advantage. Going into combat has these AI controlled characters duking it out by headbutting each other. There’s little to no input and for the most part players will either press buttons to pull off a special that’s been activated or use one of Bowser Jr’s special abilities. It’s similar to a mobile game in that regard and lacks a sense of depth despite wanting to emphasize strategy. Fortunately it’s an entirely optional mode that isn’t required to enjoy the main story, but is overall a disappointing attempt at side content that ultimately feels shallow and out of place. 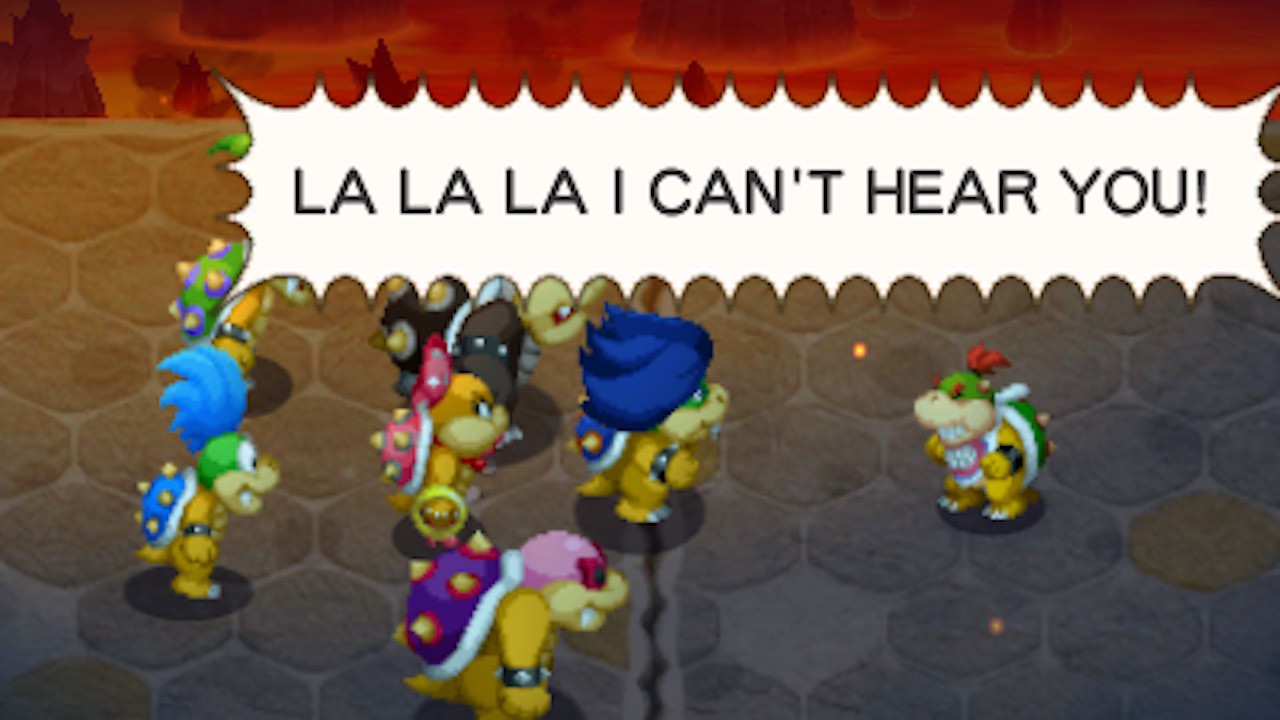 The core of Bowser’s Inside Story is a great remake that brings it into the modern era with beautiful visuals and a soundtrack that’s truly memorable. Bowser is the star of this title and is the most fun to play as by far, which makes it a shame that Mario and Luigi feel a bit backseat for the most part as they just aren’t as satisfying to run around as. Bowser Jr’s Journey is easy to overlook and it’s a shame it wasn’t a more thought-out experience that could have been enjoyable given a good shake up instead of just being a glorified mobile title. There’s a lot of things done right here, but also some missed opportunities that could have been better executed overall. Anyone who wants to dive back into the Mario & Luigi RPG series will likely enjoy their time with Bowser’s Inside Story, but it’s an extremely relaxed experience that won’t be too memorable outside lots of chortles along the way.