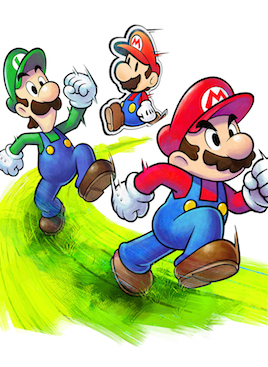 Be it the Mario & Luigi series or the Paper Mario variations — or even Mario’s first outing into RPG territory back on the SNES if your experience stretches that far back — one of the common elements never lost from one of Mario’s more perhaps celebrated spin-offs, is its sense of wit and humor. These games know they are just that: games. Pieces of entertainment to have, to hold (’til game over do us part) and to enjoy. They are self-referencing, but wise to note gratification is a reward of just performance. Not that Mario games are known for their plot-heavy detail (or their varying spin of tales throughout), but the RPG titles have been graced with many a grand, delightful cast of characters alongside narratives that are both wonderfully written and delivered equally so.

It would be easy to state Paper Jam as the ultimate fusion of both series, but in reality, it’s far from being that; the distinctive Paper a part of the sub-title for a reason. Instead, primarily centering around the Mario & Luigi universe, Paper Jam treats itself more as an expansion of what’s come before, as opposed to some bizarre mash-up of ideas. That’s not to say the paper elements feel tacked on or left to dawdle in the backdrop, because for all the three-dimensional dominance, the two-dimensional equivalents do more than enough to reign in their own share of the limelight.

Whether that be through gameplay or, more notably, during cutscenes — an early example being the two Bowser’s off-on-the-wrong-foot introduction to one another, which of course garners a smile — Mario’s textile and flatter adventures may look second-fiddle, but are in no way compromised for the dominant art style and aesthetic. You’ll come face to face with Paper-styled characters – both good and bad – throughout your adventures along with sections of the environment bearing a slightly more textile appearance. The meeting of opposites comes in no greater form than in the Papercraft battles which, appearing time to time, bear resemblance to mecha combat in both perspective as well as control. 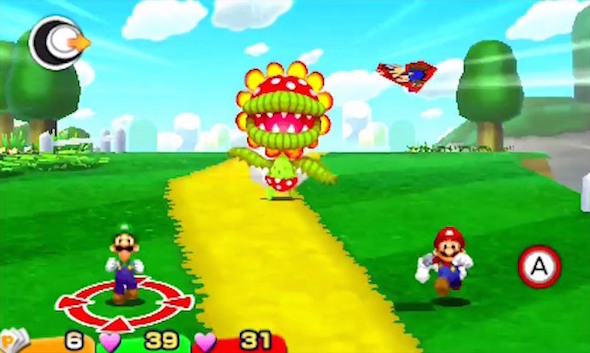 In these instances players take control of a giant Mario-shaped model with the aim to knock over and take out the enemy’s equivalent in field-sized arenas. This degree of spectacle should, on paper, falter. While some may struggle at first with the controls, one of the joys to Mario RPGs is that the short-term difficulty doesn’t last. With turn-based combat following in the same vein of never feeling static or otherwise non-engaging only proves Mario & Luigi‘s staying power as a series that needn’t change purely for the sake of it. While aspects such as ‘Bros. Attacks’ and chaining combos together remain primarily unchanged, new areas such as items that make use of the 3DS’ depth do add a further degree of engagement with both the controls and the player’s attention. Enemies also come in both 3D and Paper form and this provides further breadth to attainable strengths as it does avoidable weaknesses as to which of the three Mario brothers is best suited.

Admittedly health rarely goes scarce and to some, early proceedings will feel a little too resourceful and charitable. Out of all the menus and sub-menus, the items section was perhaps the area I frequented the least and even then it was to simply check how many more mushrooms I had to add to my growing collection. Difficulty does increase later on and as enemy attacks – with it, the ways and means they go about it – get more sophisticated, the muscle memory that is your right hand’s frantic, avid tapping of buttons is never lost. Whether that be timing your kick to knock a Koopa shell as it slides across a 3D plain, keeping eye of where enemies are likely to attack – and to whom – or simply making sure you hit the right face button (each of the three brothers’ actions locked to the same input throughout), these functions are relatively simple in nature, yet mark themselves as so satisfyingly addictive to master, it’s a testament to Nintendo’s slick and polished presentation without compromise. 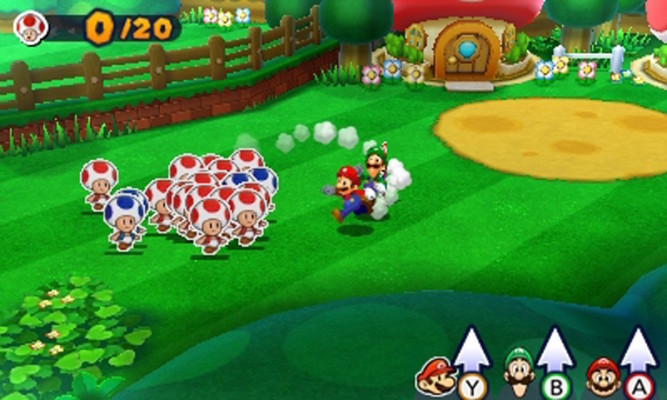 All of which plays out, as you might expect, against the same charismatic backdrop that is the environment as it does the loft of comedic hooks Mario RPG’s keep a firm grip on. While the World itself may follow pretty much the same formula as most Mario games – you’ve got your grassy region…and your desert region…as you do a tropical/snowy/fiery region – environments maintain their semi-connected fixture and at the very least don’t feel like isolated platforms amid a skybox a la Super Mario 3D Land/World. That said, there’s not much engagement aside from the odd building, hidden areas or occasional detour that’ll warrant any further investigation and for the most part, regions can be so easily passed off in favor of the next, upcoming battle.

As a result, Paper Jam doesn’t meet the hallmarks of previous Mario & Luigi surroundings, nor does it feel as illustrious or as fleshed out as any Paper Mario aesthetic. Another slight drawback is that a lot of the environment’s more spacious and expansive areas are primarily used for side-missions and an ongoing quest to free captured paper-form Toads, at which will crop up, almost unashamedly and without warning – forcing you into an objective to find a certain number of characters within an allotted time. Other moments will have you retread old ground – albeit from a different point or by way of newly-placed platforms – and the poorly-disguised need to pad out the game’s length can become, at the worst of times, all too apparent.

Yet even with these slight nuisances, there’s little lost when it comes to the dialogue that accompanies this or even cutscenes in-between where actions speak far louder than words. And this is where Nintendo really do deserve points for their writing; without spoiling anything, there’s one brief scene early on that had me laughing out loud for the way it perfectly sums up the ease at which the game understands both context and comedy timing. A lot of the reasoning and ways certain segments are phrased or expressed may appear nonsensical, but this is a Mario game; a lot of talk in that Universe doesn’t make sense to begin with and it’s more charming because of it. 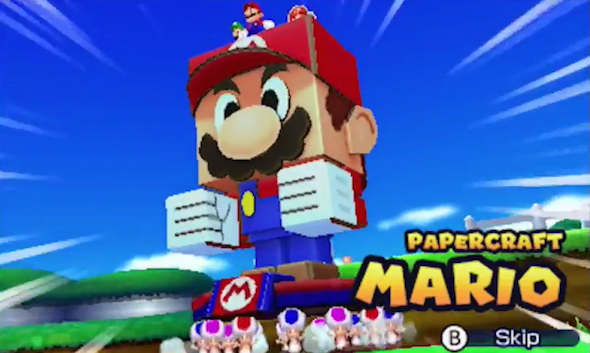 I won’t deny its first reveal back at E3, though intriguing, didn’t exactly set my tongue waggling at the thought of two RPG spin-offs merging. Couple that with what we ended up getting during Nintendo’s Digital Event and it’s unfair to tar this game with that same level of bewilderment many felt back in June. Surprisingly, however, Mario & Luigi: Paper Jam dishes up an interesting take on the Mario RPG formula without wandering too far from its roots. Some may scorn the lack of drastic change in the gameplay and while it’s fair to conclude it is more of the same in most parts, Paper Jam is — at its heart — a solid RPG with plentiful personality. It may not be the RPG we had sought at the beginning, but it’s one that marries together most (though not all) of what makes this Mario spin-off so immediately engrossing.