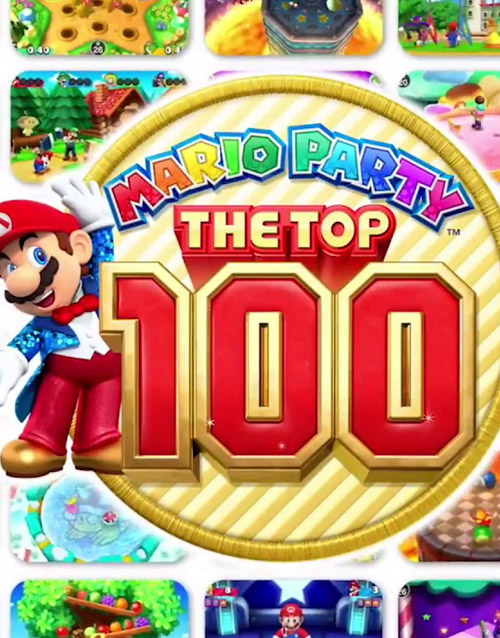 Mario Party is a beloved series that has come to be one of Nintendo’s most popular party titles due to the highly competitive, yet fun nature of the multiple entries. One of the biggest draws after the initial releases was wanting to see what sorts of minigames Nintendo would add in to each title. With that in mind, Nintendo decided to do the next best thing and simply release Mario Party: The Top 100 with the intention of delivering their greatest minigames throughout the series.

While minigames have long been one of the most integral parts of Mario Party, it was never just about seeing who was the best. The main gameplay was the boards that had to be traversed, all while trying to stop one another from reaching the next star. Fortunately, Top 100 understands this and supplies more than just minigames to play one after the other. Most included have received great overhauls to visuals, with many that appeared on Wii featuring motion controls being reworked to properly function using the 3DS. There are multiple different modes to play, both multiplayer or single, and a handful of different ways to experience favorite minigames. It’s worth noting that all 100 aren’t unlocked from the beginning and players must first traverse Minigame Island to collect any missing.

Minigame Island is more or less considered the campaign mode and is the only way to unlock the handful of minigames absent from the starting list. Players start by choosing their favorite character from the roster to play as, along with their designated partner of choice, and then start at a familiar looking Mario layout. Each individual level is simply one of the 100 challenges that needs to be played in order to progress. While each level doesn’t have to be won in first place to proceed, getting last place will cost one of the five starting lives that leads to a game over upon complete loss. Luckily every win, placing third to first, rewards ten coins and in traditional fashion earning a hundred will reward another life. Occasionally DK, Bowser or a random NPC will challenge the selected character to a duel, which eventually leads to a fitting battle against Bowser at the end. Finishing it once will unlock a harder challenge mode and collecting every star by getting first place will unlock the hardest NPC difficulty simply titled Master. 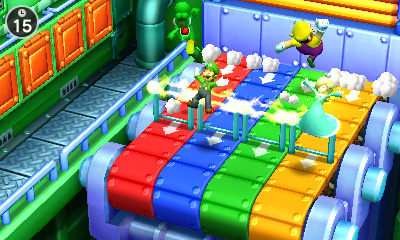 Aside from Minigame Island, there are four main modes to tackle. The first is simply the full collection of a hundred minigames which can be played an endless amount of times against NPCs. The next is Championship Battles, where the goal is to get the most wins out of three or five challenges. Minigames in Championship Battles are either randomly selected or chosen from pre-determined packs which are categorized by style, system or from the favorites list. In a similar fashion, the Decathlon challenges four players to go head to head in order to earn the most amount of points by competing in five or ten minigames while aiming to beat the highest record.

The final mode is simple called Minigame Match and will likely be the most familiar to fans of Mario Party. Four characters take up their places on the board with a simple goal to gather the most amount of stars in the allotted turns. Each star, which appears on the board as a floating balloon, costs ten coins which are continually supplied by random spaces and winning challenges. Instead of taking individual turns, each player rolls their dice and moves at the same time to any connecting space. This makes it easy to choose where to land, and more chaotic when trying to race an opponent to the star. If two or more players land on the star they compete in a minigame to see who takes home the prize. Unlike the main series, the minigames aren’t started at the end of each turn and are instead played when certain items are used and when a player hits a coin balloon. While this mode is the most fun of the bunch to play against others, it only features one map which quickly gets dull especially with the lack of random nature the main line Mario Party maps bring to the board.

Of course, it wouldn’t be Mario Party if players couldn’t compete in almost all of the modes against friends. Aside from Minigame Island, up to three other people are able to connect using either individual copies of Top 100 or by simply doing a 3DS digital download to play freely and compete to see who is truly the minigame champion. Although the multiplayer would be a lot more fun and accessible if given the option to also take it online, as competing against friends is easily the most enjoyable aspect of Mario Party, at least letting players compete without each having to own their own copy makes for a fun way to easily play quick matches. 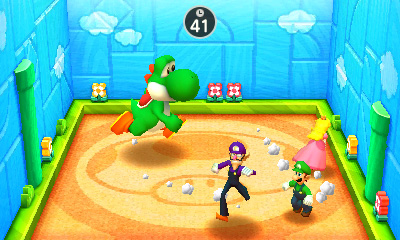 Although it has Mario Party in the title, Top 100 is lacking in the more complex and competitive nature that fans of the series have come to look forward to. It’s fun to replay some of the best the series has to offer, but it feels a bit empty compared to the wacky and creative aspects of so many memorable maps the rest of the series has come to offer in addition to a slew of minigames. While it can make for an enjoyable title for younger players who can easily grab some friends and compete in short spans of time, Mario Party: The Top 100 doesn’t have quite enough to keep players coming back to it in the way any other main line entry has been able to over all these years.