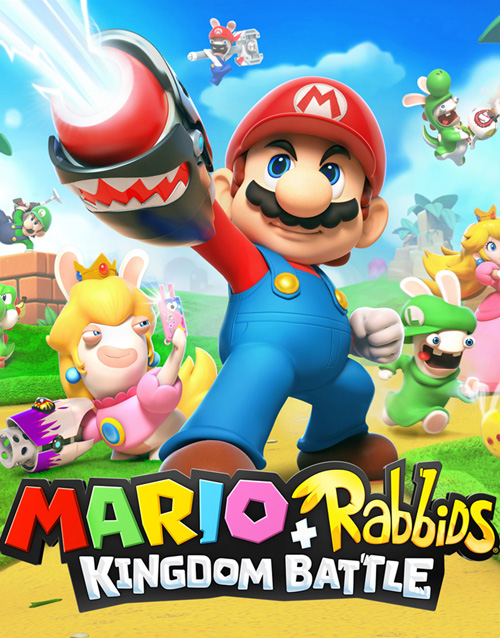 Mario teaming up with Rabbids to save the Mushroom Kingdom with XCOM-style tactical combat is something no one was expecting prior to E3, but since the Cubs won the World Series anything is possible these days. Crossover titles and games deviating from their standard genres are not unheard of, and games such as Marvel vs. Capcom or Hyrule Warriors have shown us that such deviations can result in quality games. Mario may be the single most iconic video game character, so seeing him appearing in a title not developed by Nintendo is concerning, but Nintendo wouldn’t lend out Shigeru Miyamoto’s creation if they didn’t have faith in the creative team that will be handling him. Mario + Rabbids Kingdom Battle is the product of Nintendo entrusting Ubisoft with their main man Mario and the final results indicate that their faith in Ubisoft was not misguided.

How the Mushroom Kingdom ended up getting infested with Rabbids is probably something everyone has been wondering since there is no theory that I know of indicating these two franchises exist in a shared universe. These mischievous critters end up finding an augmented reality helmet called the SupaMerge, which can fuse two items together to create a new item (for example a flower lamp can be made by combining a lamp and a flower). When the Rabbids find the SupaMerge, they start combining all kinds of things with themselves as they have no impulse control and make me think they are what you’d get if those critters from Gremlins 2: The New Batch were given bunny costumes. They start combining themselves with Nintendo items and to the surprise of no one the SupaMerge malfunctions and teleports the Rabbids to the Mushroom Kingdom. 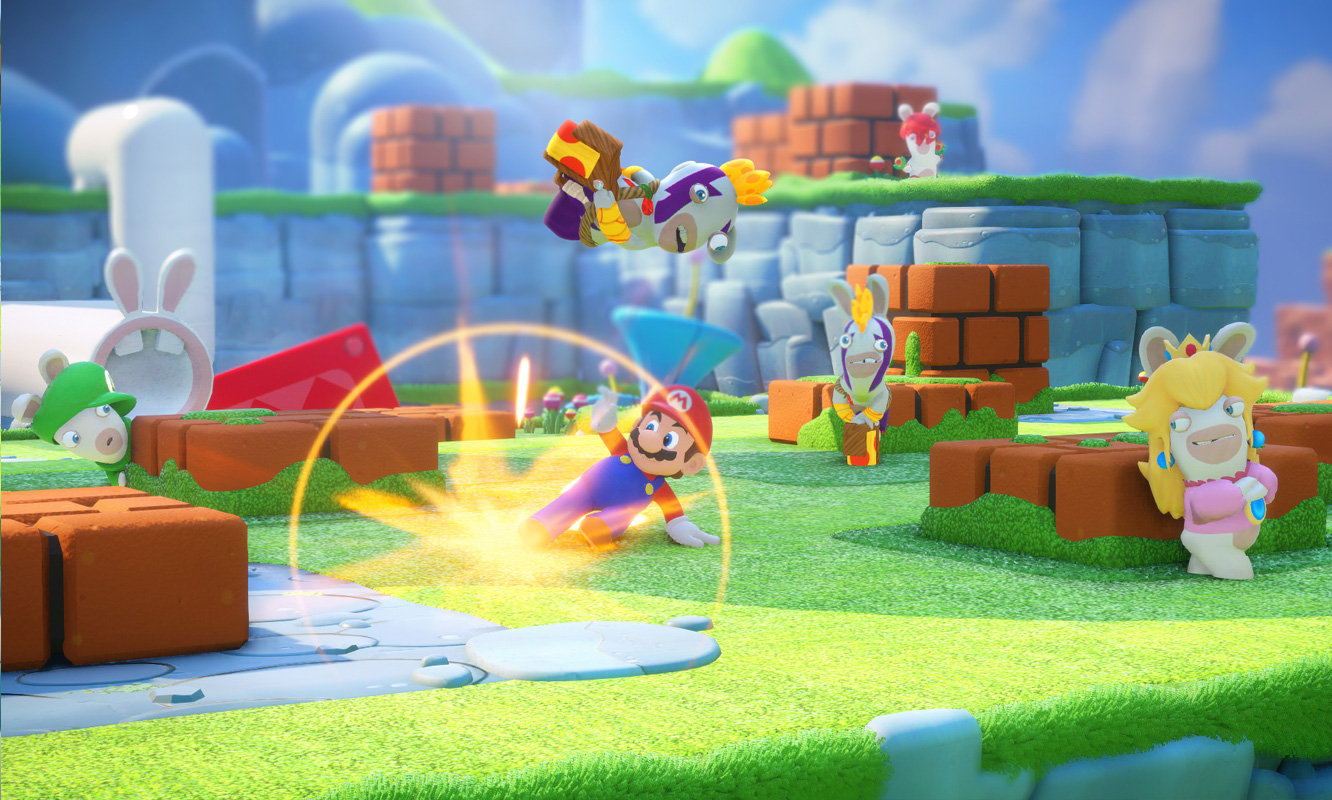 Mario + Rabbids Kingdom Battle takes place several worlds within the Mushroom Kingdom, including the Ancient Garden, Sherbet Desert, Spooky Trails and Lava Pit. Each World is divided into nine chapters and one secret chapter that can be revisited after it has been completed. Each chapter is divided into an exploration portion and a battle portion. The exploration portion is traveling from the beginning to the end of the chapter while hunting for secrets and solving puzzles. Each chapter can have anywhere from one to four battles. Health is not replenished after each battle, though all characters are healed at the end of each chapter and there are healing mushrooms in some chapters. Boss battles at the end of the chapter are much longer and more drawn out than the regular skirmishes and there is some sort of trick involved to taking down the boss involving some environmental object.

One does not need to be a West Point graduate in order to develop a winning strategy in Mario + Rabbids Kingdom Battle, but the turn-based tactical combat has more depth to it than the cute graphics may have you believe. Battles have different goals to them, like beat all enemies, beat X number of enemies, reach the escape point, reach multiple areas, protect and escort a character, or beat the boss. Each character has different strengths and different skills that can be unlocked and chaining some of these skills together can make a world of difference in battle. An example of maximizing a character’s turn is Mario can inflict damage to an enemy by dashing into it, then moving to a teammate for Team Jump, and if he has the Stomp Jump skill unlocked he can land on another enemy in his signature offensive move to inflict damage, and after he lands execute his normal attack and finish up his turn by activating Hero Sight where he will shoot the first enemy that moves when it’s their turn. 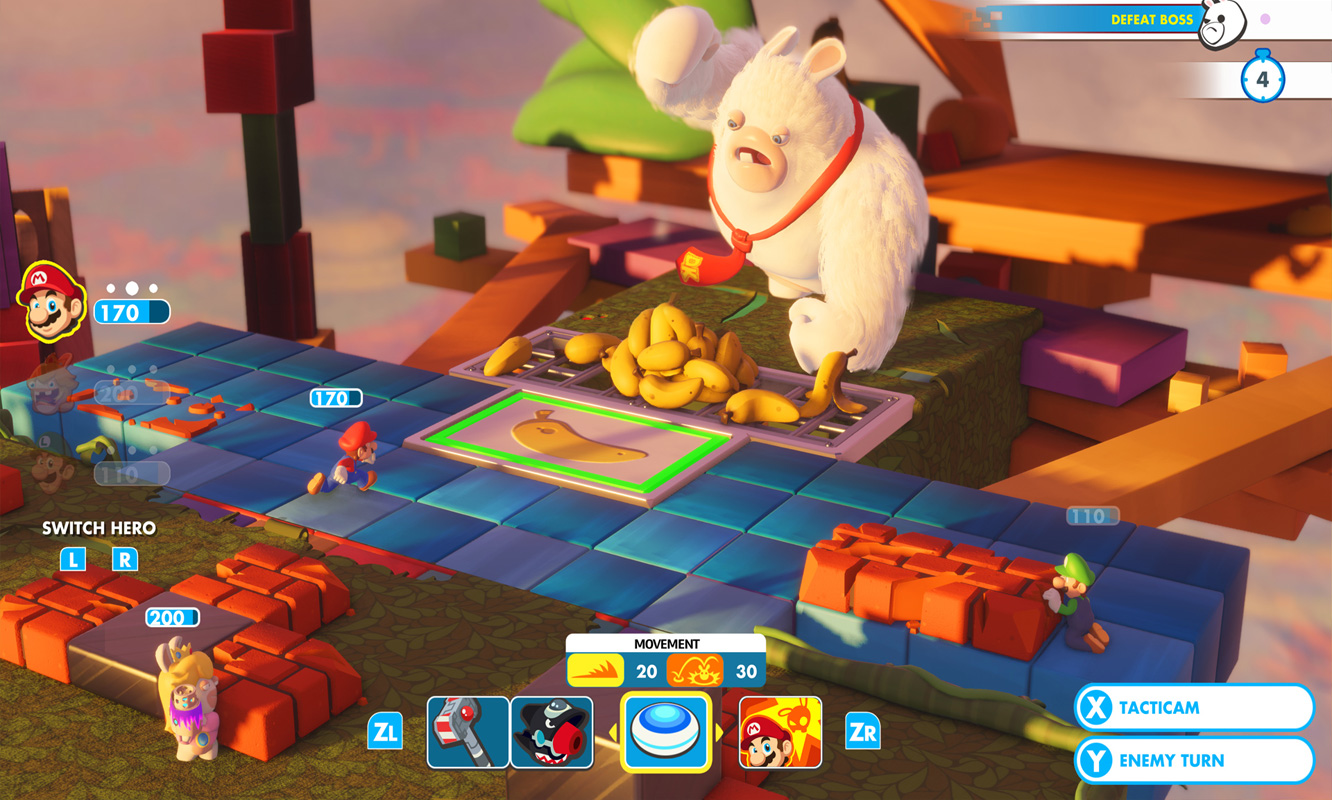 Typically the player will have the first turn in battle, though the option to end the turn and let the bad guys go first is a possible. Prior to battle the player has the option to use the Tacticam to get a feel for the layout of the battlefield and how many enemies they are up against or they can skip that and go right into the fray. The player can switch which character they want to act to maximize what they can do during their turn, though there are several factors to consider. Cover does play a role, and some structures provide fifty percent reduction in the chances of getting hit while others may provide full coverage, at least from certain angles. Some of these structures are indestructible and others will go down after a few hits. Being on higher ground also provides a bonus to damage, but when plotting out character placement at the end of the turn one needs to factor in that the enemies do move about the map, so what could be a guaranteed safe space with the current enemy placement could result in being a sitting duck when they move.

Certain environmental hazards come into effect in some fields, such as Chain Chomps or exploding cover. Chain Chomps tend to attack whoever is closest to them so they can end up being an unintended ally if you can keep a hostile unit between you and them, and enemies hiding behind explosive barriers are obviously asking for you to blow them up. Some weapons have special effects attached to them. A few examples of these are honey, which prevent the target from moving. Burn inflicts additional damage and causes the victim to run around in pain which by chance can put them in a more advantageous or disadvantageous location, and bounce can knock them back, either further away from the players or out of bounds for additional damage. This is not an exhaustive list of everything to consider, but a mere taste of the variables that players will face in combat and have to develop strategies for tackling. If any battle is too hard, it is possible to activate easy mode at the start to give everyone a fifty percent hit point boost, or simply changing the party line up or skills and equipment might do trick. 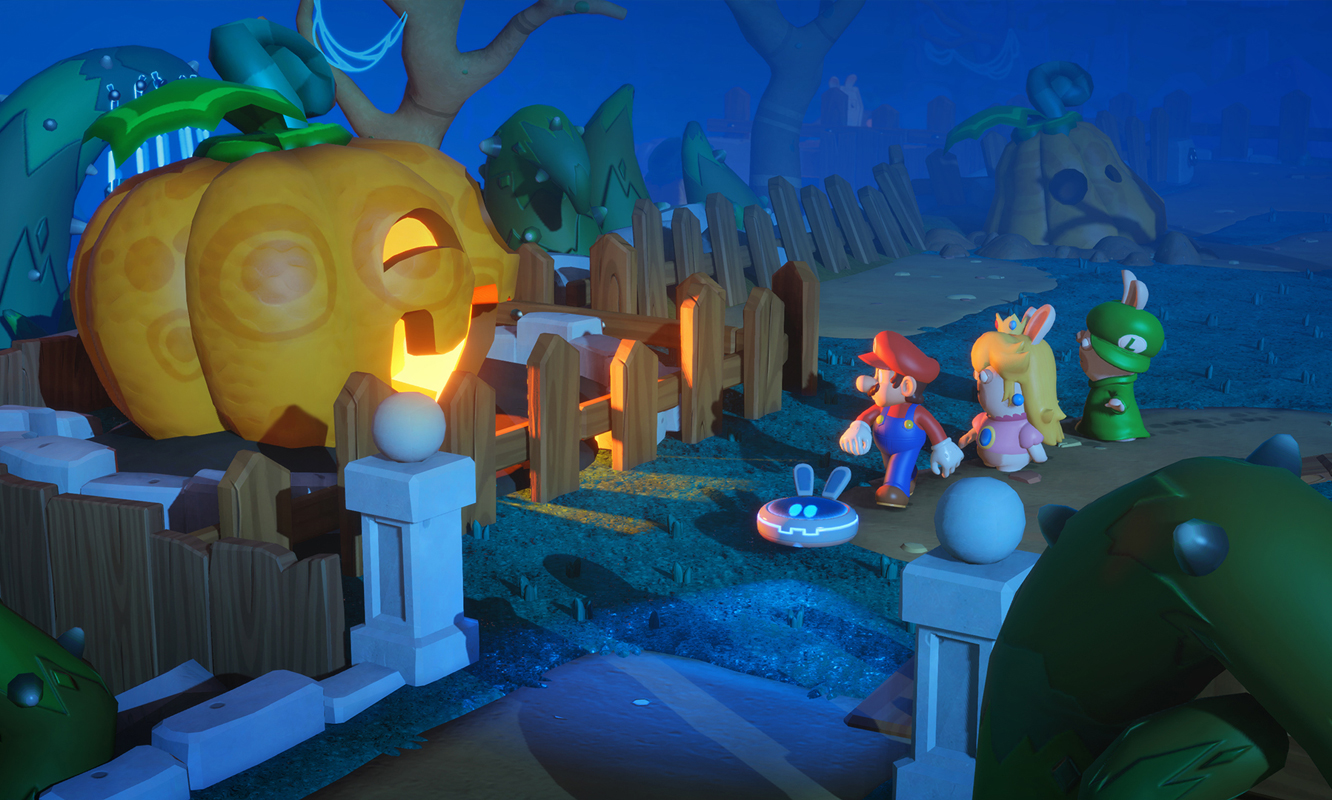 One of the traditions associated with Mario games is couch co-op and Mario + Rabbids Kingdom Battle does not fail to deliver in this regard. The player is controlling teams of three in single player battle, while in two player mode the team becomes a four person team and each player selects two characters to control. A second controller is not required for this since one player uses the blue Joy-Con and the other uses the red Joy-Con, or right and left for those of you that own the black Joy-Cons. Two player maps are unlocked as progress is made through the single player campaign and vary in difficulty from being virtually impossible to lose to being a West Point graduate would help quite a bit. Both players are on the same team and battle against hostile AI controlled opponents. All skills unlocked in story mode are available in co-op mode. Co-op mode has five campaigns with eighteen different challenges, with an easy and normal difficulty depending on how much the players wish to be challenged. Once a campaign is completed, a hard difficulty is unlocked if they players thought things were too easy. The addition of a fourth team member does open the door to new strategies being implemented, but the players need to be mindful that friendly fire does exist. New Super Mario Bros. Wii is believed to be responsible for many divorces and ended friendships do to jump challenge shenanigans, we do not want to see similar results from Mario + Rabbids Kingdom Battle.

Characters can be customized through collection of coins and power orbs. Coins are used to purchase weapons and are shared in a communal piggy bank between all characters. Each character can have a primary and secondary weapon, and there are over 250 weapons available in the game. It’s not possible to collect every weapon for every character throughout the course of normal gameplay, so the player needs to think about what sort of special effects they want for who before making the purchase. Power orbs are used to unlock abilities in the skill tree and these are divided into categories of movement, attack, technique and other. Power orbs are not shared across all characters, so spending thirty power orbs on Mario will not result in limiting what is available for other characters. Each character’s skill tree is unique so these can be built up based on what a player’s preferred party is and what strategies they like to incorporate. A beautiful thing about the skill tree is the player can reset them and redistribute the power orbs if they are not happy with the build they made. 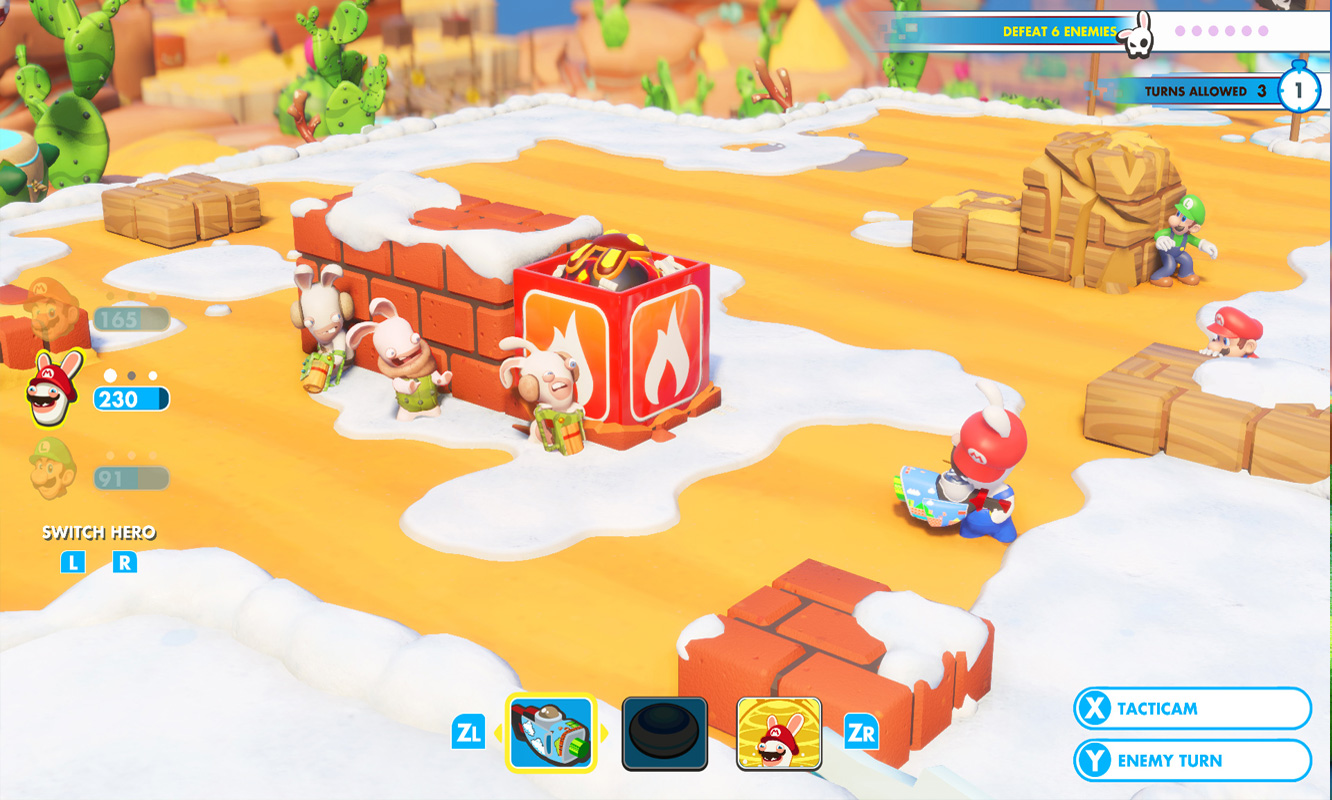 The main playable characters in Mario + Rabbids Kingdom Battle are Mario, Luigi, Princess  Peach and Yoshi, along with their Rabbid counterparts making the roster of party members a nice even eight. Each character has different skills and abilities, Peach excels at healing and Mario can chain team jump into a stomp jump to get an extra attack in the round. Their Rabbid counterparts tend to have similar unlockable skills to their Mushroom Kingdom native counterparts but different enough where having Yoshi and Rabbid Yoshi in the same party isn’t completely redundant.

Throughout the Rabbidized Mushroom Kingdom are many hidden treasures to be found and viewed in the museum located near the castle. Some of these cannot be acquired during the initial visit to an area and require the player to return after that world has been completed. These collectibles don’t seem to give any real benefit to the gameplay but are fun to look it and give completionists something to hunt. Mario + Rabbids Kingdom Battle does support all existing and future Mario, Luigi, Peach and Yoshi amiibos. Connecting any of these amiibos will unlock two exclusive in game weapons, one for the amiibo’s character and one for the Rabbid counterpart.

Graphically Mario + Rabbids Kingdom Battle looks fantastic. The art director has done a bang up job of recreating the look and feel of the Mushroom Kingdom from a mainline Mario game and then went to town vandalizing it with Rabbid centric graffiti. The once great kingdom has been transformed into something twisted, with demented Rabbid statues populating the landscape and the once welcoming warp pipes now appear as uninviting Rabbid monuments. Controlling Mario and his companions through this twisted world is a breeze both in battle and exploration. The soundtrack, while pleasing to the listener, tends to mirror the bizarre scenarios and environment the players find themselves in. 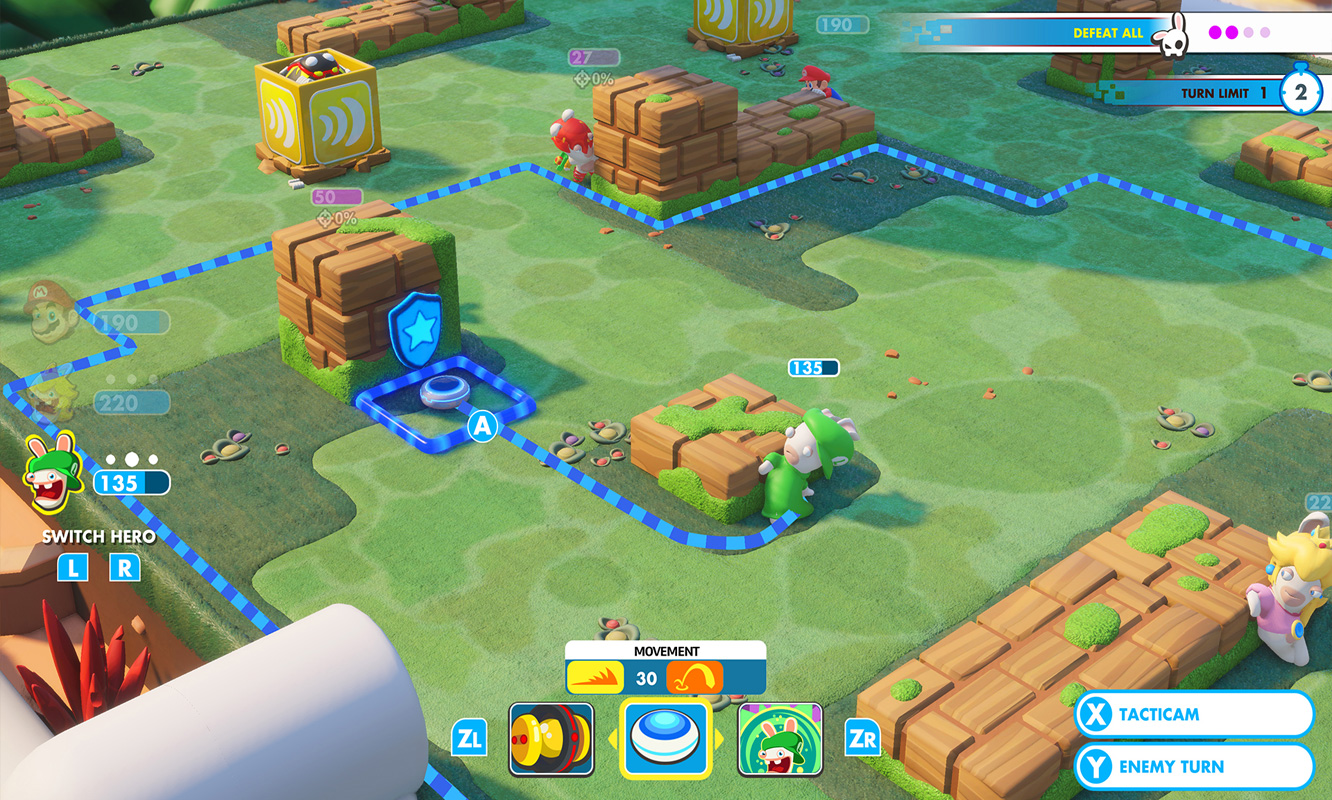 While not a traditional Mario or Rabbids game, Mario + Rabbids Kingdom Battle contains enough elements from both franchises to appeal to fans of either series. The lighthearted humor and silly visuals combined with a surprisingly deep battle system make this unexpected crossover a delight to play. Collecting all the secrets in story mode and customizing each character will give the player plenty to do and the co-op battles can provide hours of enjoyment as the players experiment with different party combinations and strategies. Seeing iconic Nintendo characters merged with Rabbids, such as Rabbid Kong or a Pirabbid Plant makes it almost impossible to not chuckle. As skeptical as some might have been at this concept working, spending significant time with the game indicates it not only works, but also is a must-own title for any Switch library.