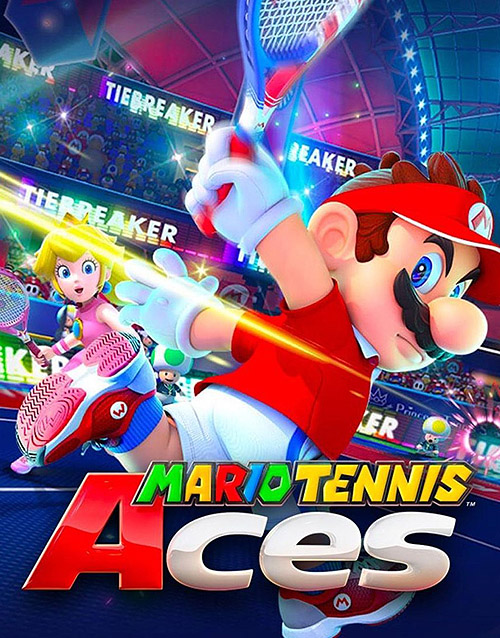 Upon booting it up for the first time, it’s made immediately clear that Nintendo and Camelot intended to do something different with Mario Tennis Aces. Instead of immediately directing players to the main menu, Mario Tennis Aces instead drops them into the final seed of the Mushroom Kingdom’s latest tennis tournament. It’s Mario and Peach vs. Bowser and Bowser Jr. Just before the final point can be scored, Wario and Waluigi enter the scene. At first it looks like they’re up to their old shenanigans, but something about their expressions tells the player that something’s amiss. That hunch is quickly proven correct, and the duo proceed to unleash a golden, talking and apparently evil tennis racket. It declares its intent to take over the world before disappearing and taking Wario, Waluigi and a very hapless Luigi with it. Now it’s up to Mario and Toad (yes, Toad) to find out what exactly is going on and save the day…by being really, really, ridiculously good at Tennis.

This new Adventure mode plays out similarly to a Mario-themed RPG. Mario and Toad travel across what one would think is across the Mushroom Kingdom, gathering five “Power Stones” and taking on various challenges and challengers across multiple themed areas. Along the way, Mario gains experience and grows more powerful as he levels up and gathers better tennis rackets. It’s not as robust as the RPG modes seen in Mario Tennis (GBC) or Mario Tennis: Power Tour (GBA), but it’s got it where it counts.

In addition to a light story, Adventure mode offers players plenty of content in the form of exhibition matches, shot challenges and boss battles. Exhibition matches take place on both normal courts and courts with environmental hazards like tennis ball-spitting Piranha Plants. Once an exhibition match is completed on a new court, it is unlocked for use in Free Play mode. Boss battles all have their own little twists, but share the objective of wearing the boss down enough to hit them with a Zone Shot, which is also one of Mario Tennis Aces’ new features. Shot challenges can vary greatly from challenge to challenge. They can range from simply trying to keep a rally going with Toad, to defeating a wall of Piranha Plants, to helping other characters work on different aspect of their tennis game. The only real issue here is the lack of a “retry” button after failing a challenge. Instead, the player will get sent back to the map screen and have to skip through all the dialog before getting the option to try again. Other than this, Adventure Mode is a (mostly) fun way to get familiar with the new controls before heading into the multiplayer modes. 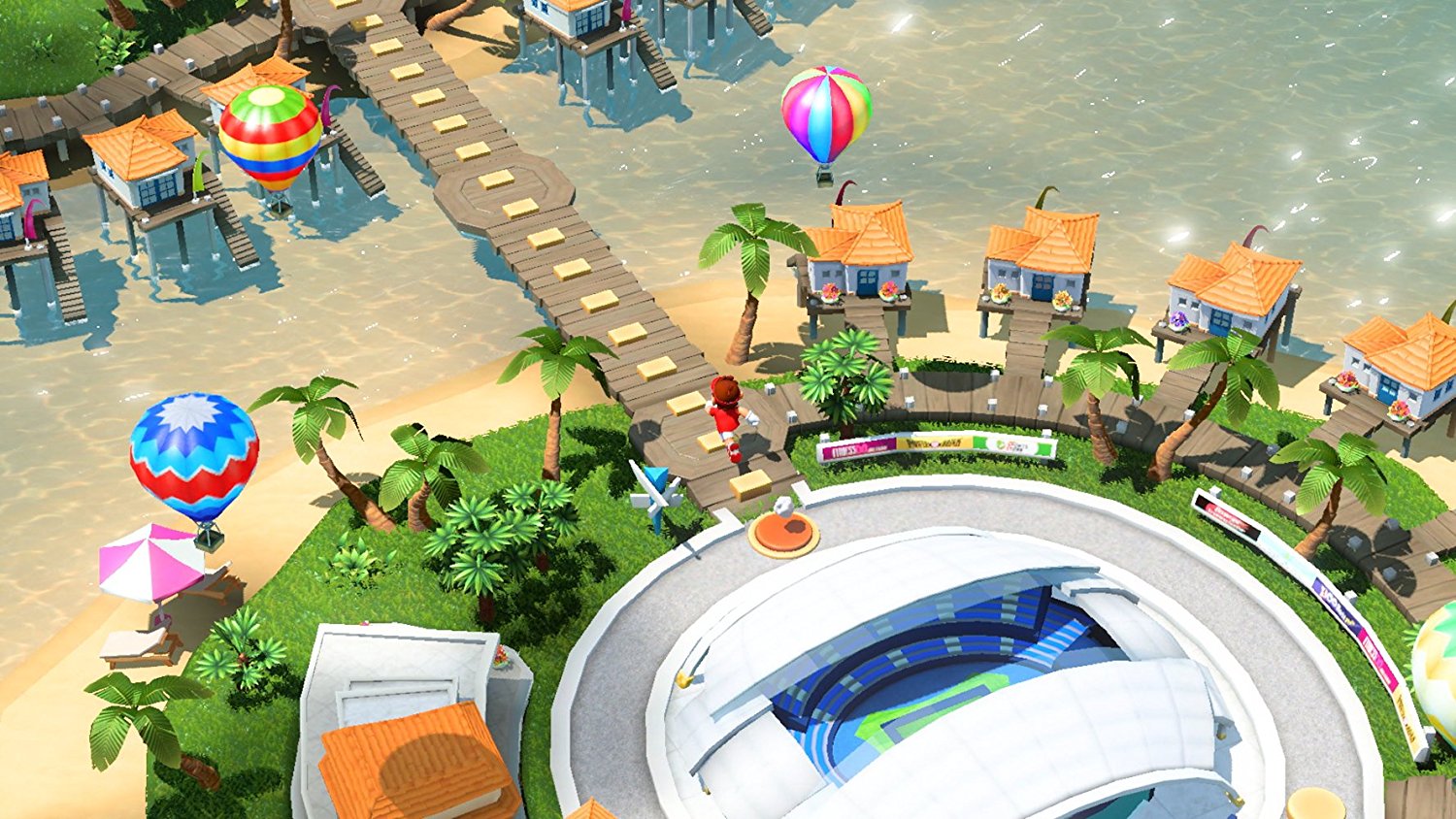 Adventure Mode aside, the biggest difference between Mario Tennis Aces and its predecessors are its controls. All the legacy shots and moves are still present, but Aces adds an extra layer of powerful shots and moves to spice the game up a bit. Starting with the basics, players can hit Topspin, Slice, Flat, Lob and Drop Shots, and they can also lunge for the ball if they’re a little too far away. Each shot type has its own dedicated button and lunges are performed automatically by pressing any of them a certain distance from the ball. Once players have that down, it’s time to dig into the game’s unique additions.

Mario Tennis Aces add several new abilities into the mix: Zone Shot, Zone Speed, Trick Shot, Special Shot and Guarding. Each player has an energy meter that fills as they make and return shots to the other player. Filling this meter grants access the above mentioned special abilities, all of which, except for Trick Shot and Guard, drain it at different rates. Zone Shot allows players to quickly aim their shot, Zone Speed slows down time to allow a player to reach a ball, Trick Shot sends them flying across their court to return the ball, Special Shot triggers a powerful nearly-unblockable shot and a successful Guard keeps their racket from being damaged by a Zone or Special Shot. That’s right, rackets can be damaged and even broken in Mario Tennis Aces, and players only get so many. If they all get broken, then its game over by Knock-Out.

With so many seemingly overpowered moves added to the player’s arsenal, it’s probably easy to think that their inclusion breaks the game. This is not the case. Since all these abilities draw from the same pool of energy and drain it quickly, they are not unlimited and must be used carefully. One could blow their whole meter on a Special Shot, but doing so would leave them open to a Zone Shot from their opponent. Instead of breaking the game, they add a new and welcome layer of strategy to it. 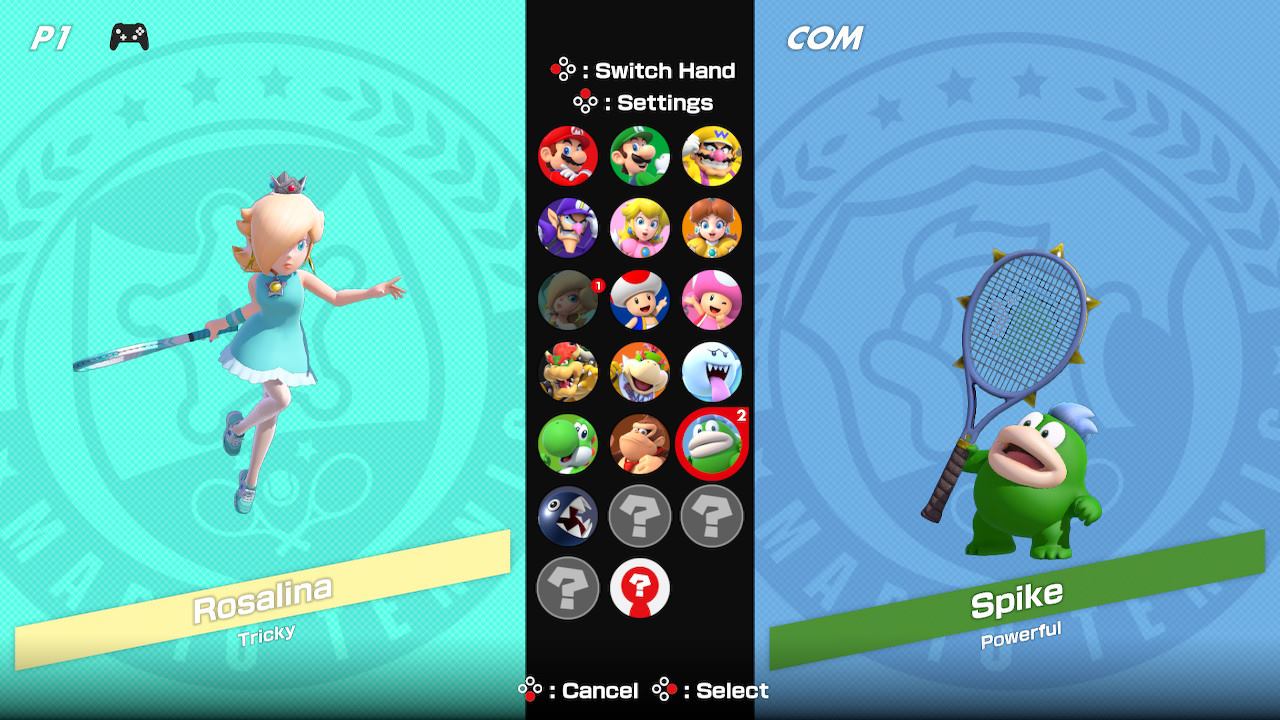 Mario Tennis Aces features a roster of sixteen characters, with three more to be unlocked in the coming months. New additions this time around include Toadette, Spike and Chain-Chomp. They each have their own style and stats, but just like the original game, it’s difficult to tell what the difference actually is between them. Well, aside from the tricky characters, that is. Both Boo and Rosalina have the ability to curve the ball much more than the rest of the cast, but not to the point of it feeling broken. Despite not feeling drastically different in the grand scheme, each character has their own unique style of movement, celebration animations, taunts and special shots. They really do feel like characters rather than just an avatar like they did in previous games.

Outside of Adventure Mode, Mario Tennis Aces offers three other main modes of play: Tournament, Free Play and Swing Mode. Tournament is split between online player vs. player and the classic player vs. computer cups. The online tournament can be played using all of Mario Tennis Aces’ new featured or just the basic shots; there is actually a tournament for each of these control schemes. This can be thought of Mario Tennis Aces’ version of ranked multiplayer. By playing and winning often, players can earn points and hopefully earn a spot in the second round of the actual tournament. Details on how the overall tournament works are a bit fuzzy though. Even if one doesn’t earn enough points, it’s still worth participating because just playing is enough to earn a new character for each month that the tournament is active.

Free Play is segmented into online, local and single-console play. While enjoying online play, players can choose between either the standard controls or simple controls with all of the new bells and whistles removed. Once they’ve decided, all player has to do is jump into a game against whomever the game picks as their opponent. This isn’t the end of it though. Unlike with Mario Tennis Ultra Smash on the Wii U, players can define their own custom rooms and invite their friends to play. In all of these modes, the game successfully inspires the intense feelings of rivalry between players, and competing quickly becomes very addicting. It’s still at it’s best when playing doubles with a group of friends, but into online solo or with a friend comes pretty close. Due to how the controls work, losses and wins both feel as though they were earned and not simply the result of lag or bad luck. Speaking of lack, the game runs very well online and out of the dozen or so matches played so far, this reviewer only encountered two minor instances of lag. 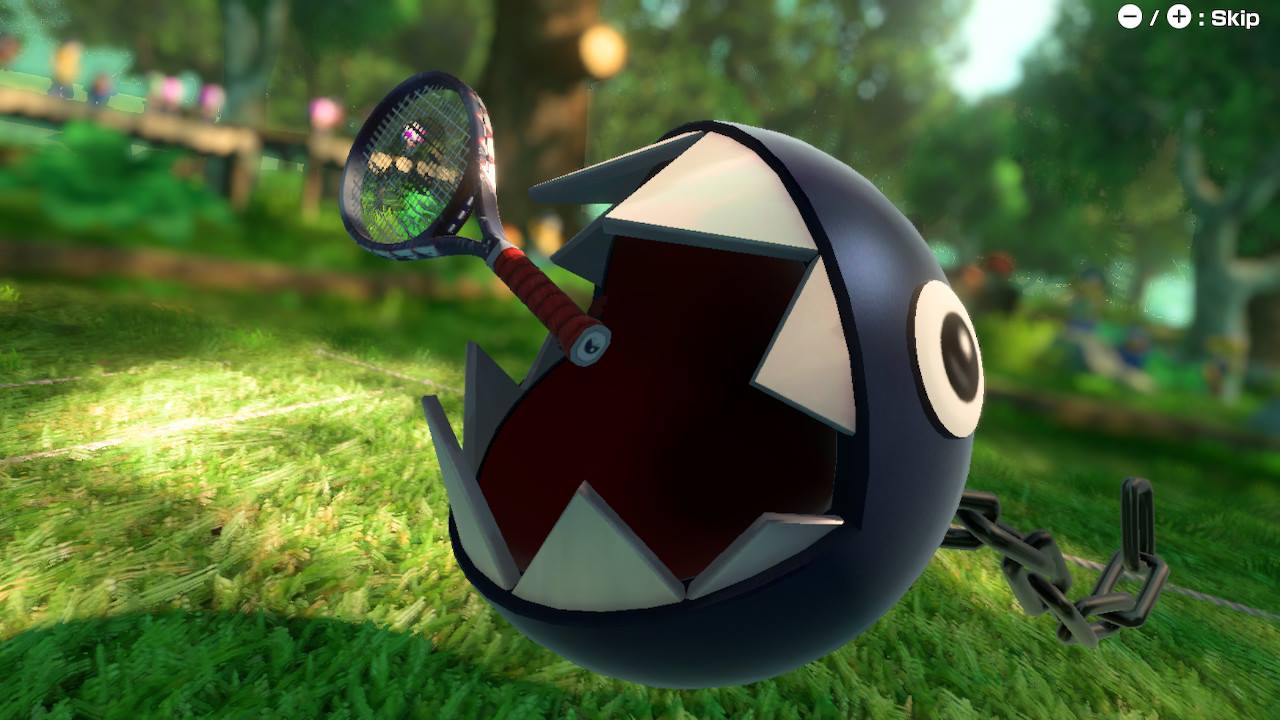 These custom settings also extend to local play between multiple Switch consoles and single console play. One would like to say that players have full control over the rules in their custom rooms, but there are two odd omissions that keep such a statement from being completely true. The first of these is the absence of the ability to directly choose a court for each match. Instead, players can only choose the courts from which the game will choose at random. One can turn off all courts except for one, but it’s still annoying. The other odd omission is the ability to choose the number of sets for a match. The only options are “Quick play” (aka “first to seven points) and “Extended Play” which is nothing more than a single set of three games. Considering that the original Mario Tennis on N64 offered much more flexibility in these areas, their absence here is quite baffling.

The last mode on offer here is “Swing Mode” which, as the name implies, allows players to play using the Joy-Con motion controls. In this mode, players can choose from three game types: “Regular Ball,” “Big Ball” and “Rally Challenge.” In all of these, the goal isn’t to play tennis so much as it is to try and play by swinging the Joy-Con correctly. The computer handles the player character’s movement, so all one has to do is swing the controller. It works well enough and the Joy-Con does a good job of detecting swing direction and angle, but it just winds up being a boring version of the regular game. This mode is good for playing around with one’s friends once or twice but that’s about it.

In terms of presentation, Mario Tennis Aces is the same kind of gorgeous as Mario Kart 8. In docked mode, the game runs at smooth 60fps and meets the HD expectations created by its racing game cousin. In handheld mode, the game sees a slight graphical downgrade and doesn’t quite run at 60fps, but still looks great nonetheless. It’s courts are filled with little details to pick out. Each character has their own little walk-on intro and a group of fans to cheer them on. When playing online, player’s names will show up on the court surface and on scrolling marquees in the stands. It all comes together to enhance an already enjoyable experience. 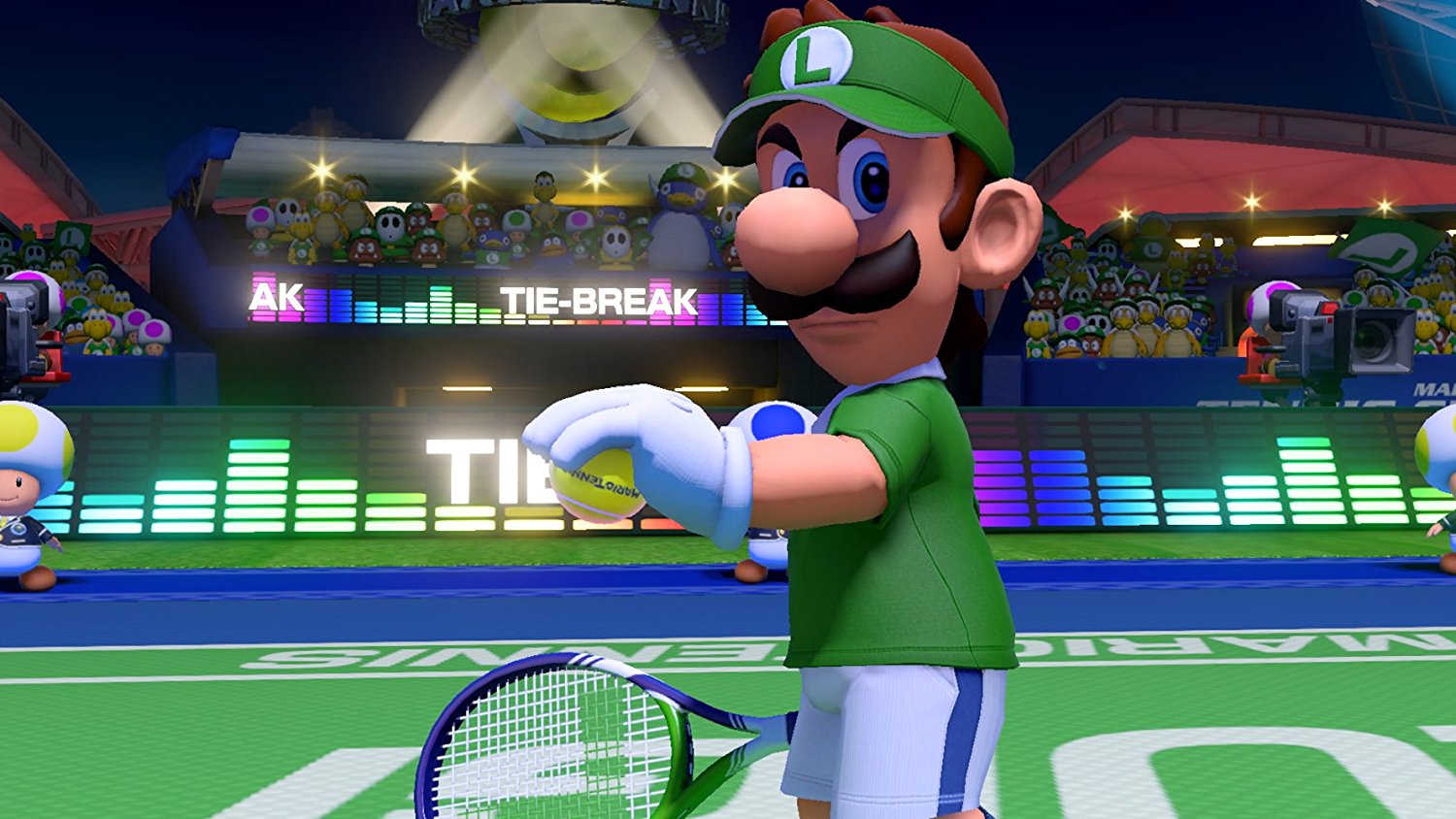 With Mario Tennis Aces, Nintendo has delivered a worthy successor to the N64 original. Both the standard and simplified control schemes work well and feel natural, and the game’s new move-set adds a welcome layer of strategy to the overall experience. Its Adventure Mode, while not as robust as its predecessors, is still an enjoyable way to get familiar with the game and helps it feel like a complete package overall. Local and single-console play are handled well and online play is finally everything it should have been on Wii U. The game suffers from a few oversights like the inability to set the number of sets in a match or directly choose a court. Having the ability to change from a split screen to a shared screen in single-console multiplayer would have been nice too. Other than that, Mario Tennis Aces looks and sounds great, and is something any Mario Tennis fan will enjoy.