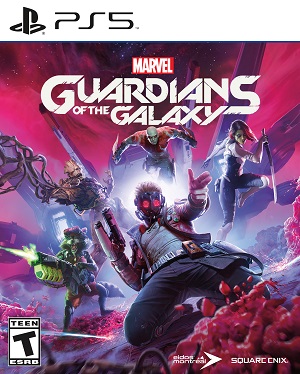 Marvel’s attempt at breaking through in the games industry has been mixed. While Insomniac Games managed to deliver two stellar Spider-Man games, other developers and publishers haven’t faired as well. Team Ninja’s Marvel’s Ultimate Alliance 3: The Black Order received average scores and Crystal Dynamic’s Marvel’s Avengers was widely panned. So when Square Enix announced Eidos Montreal’s Marvel’s Guardians of the Galaxy, many were skeptical due to controversial designs, the lack of playable characters outside of Star-Lord, the MCU-like vibe of the released trailers and the general reception to Square Enix’s last-published Marvel game, Marvel’s Avengers. Now months on from that initial reveal, Marvel’s Guardians of the Galaxy has finally landed. Can the band of misfits sync up and successfully save the Galaxy or is this iteration of the Guardians doomed to fail?

Star-Lord serves as the anchor, with Jon McClaren delivering a memorable and powerful performance. The game cleverly dives deep into the character, personifying him in a way we haven’t seen in previous incarnations. We see his fears, doubts, wants and needs, and it all excellently seeps into the overarching narrative. The rest of the Guardians are also treated with reverence, with the game digging deep into their pasts and drudging up a cache of powerful character moments. It might sound crazy, but these characters, minus Rocket, might be the best incarnation of the heroes we’ve seen yet. Unfortunately, while this version of Rocket is a joy, Bradley Cooper’s rendition remains king. 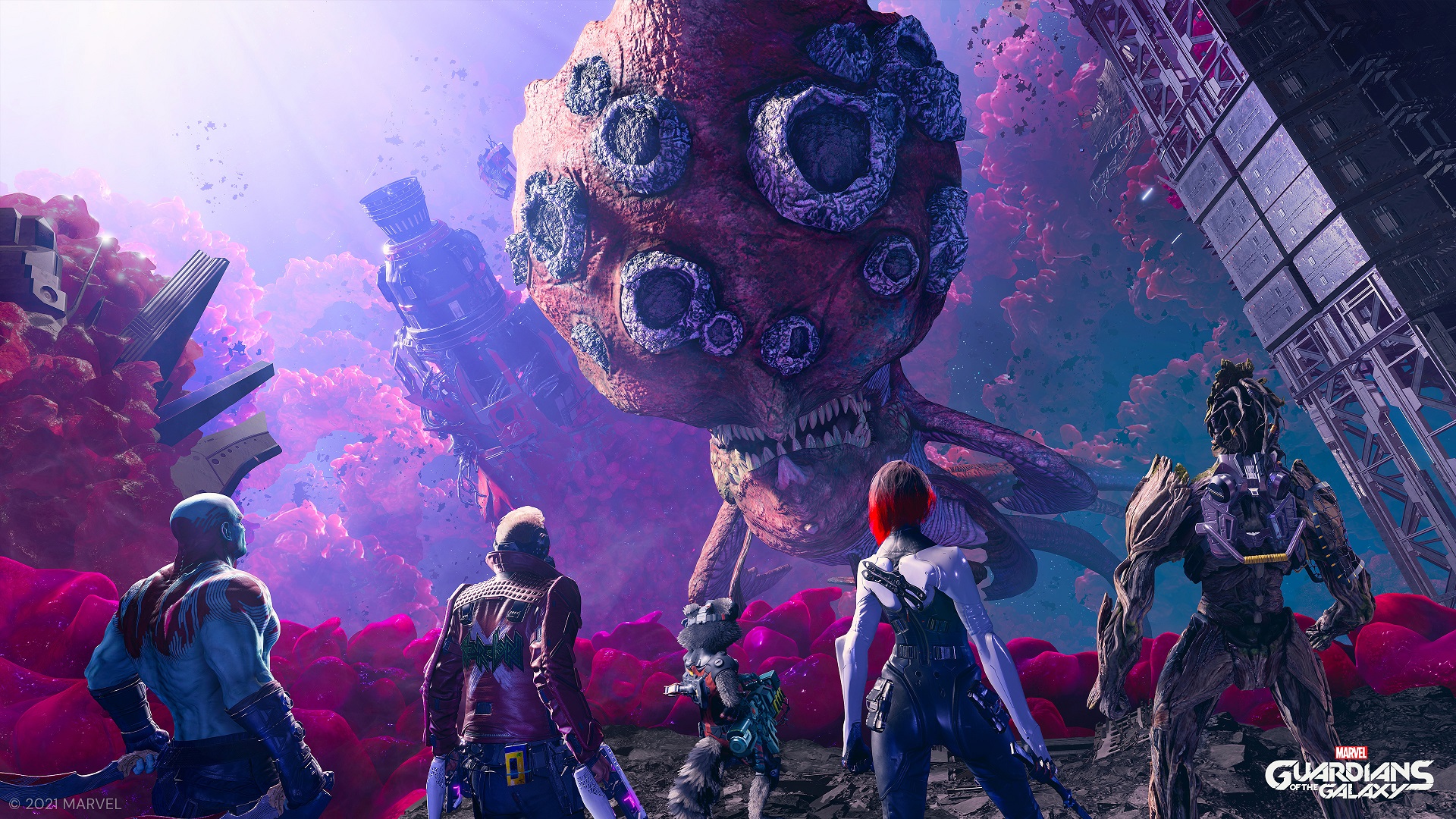 Filling out the ranks is a cast of colorful characters that include familiar faces like Mantis and relative newcomers like Lady Hellbender. It’s a genuinely great cast of characters that are sure to get you to chuckle, burst out laughing or earn your loathing. They’re perfect complements to our plucky heroes. Marvel’s Guardians of the Galaxy tells an excellent story, weaving together comedy and tragedy to produce one of the best thought-out, heart-melting stories of 2021. It’s also a lengthy story with a total of 16 chapters to play through, equating to around 18-20 hours on the default difficulty. Thanks to smart pacing and well-designed levels that keep the action moving, the narrative quickly flies by.

The 16 chapters are primarily linear, with a handful featuring more open areas for exploration. There are a few divergent paths players can take to find unlockable costumes and hidden souvenirs relevant to each character. These souvenirs unlock additional dialogue that delves further into each member of the team’s pasts and their beliefs. Peter’s ship, the Milano, provides a space to chat with the team, purchase perks or listen to the fantastic soundtrack. For the majority of playtime, however, the game keeps you singularly focused on the narrative path. Marvel’s Guardians of the Galaxy’s flexibility comes in the form of its dialogue trees. At different points during the story, players will make choices that have minor consequences, like another dialogue playing, or significant consequences, like if certain characters aid you in later chapters. For example, getting a character on your side will get you their access card, giving you additional explorable spaces in a later chapter. The dialogue options are undoubtedly neat and make revisiting chapters tempting, though they ultimately don’t alter the story’s trajectory.

At a surface level, Marvel’s Guardians of the Galaxy looks like a basic third-person shooter, and, in some respects, that’s true. As Star-Lord, players will run-and-gun with his Elemental Blasters, jump around with his jet boots and punch enemies with his fists. The Elemental Blasters, which gain new elemental powers throughout, can be paired against the right enemies to stagger them for additional damage. Along the way, Star-Lord also gains additional cosmic abilities that’ll help him gain a vantage point over enemies, rapidly fire his blasters or even repel all damage. The L2/LT button works as a lock-on rather than the traditional aim-down-sights functionality in other third-person shooters. The game helps you aim as best as possible so that you can focus on something equally, if not more important: ordering the Guardians. 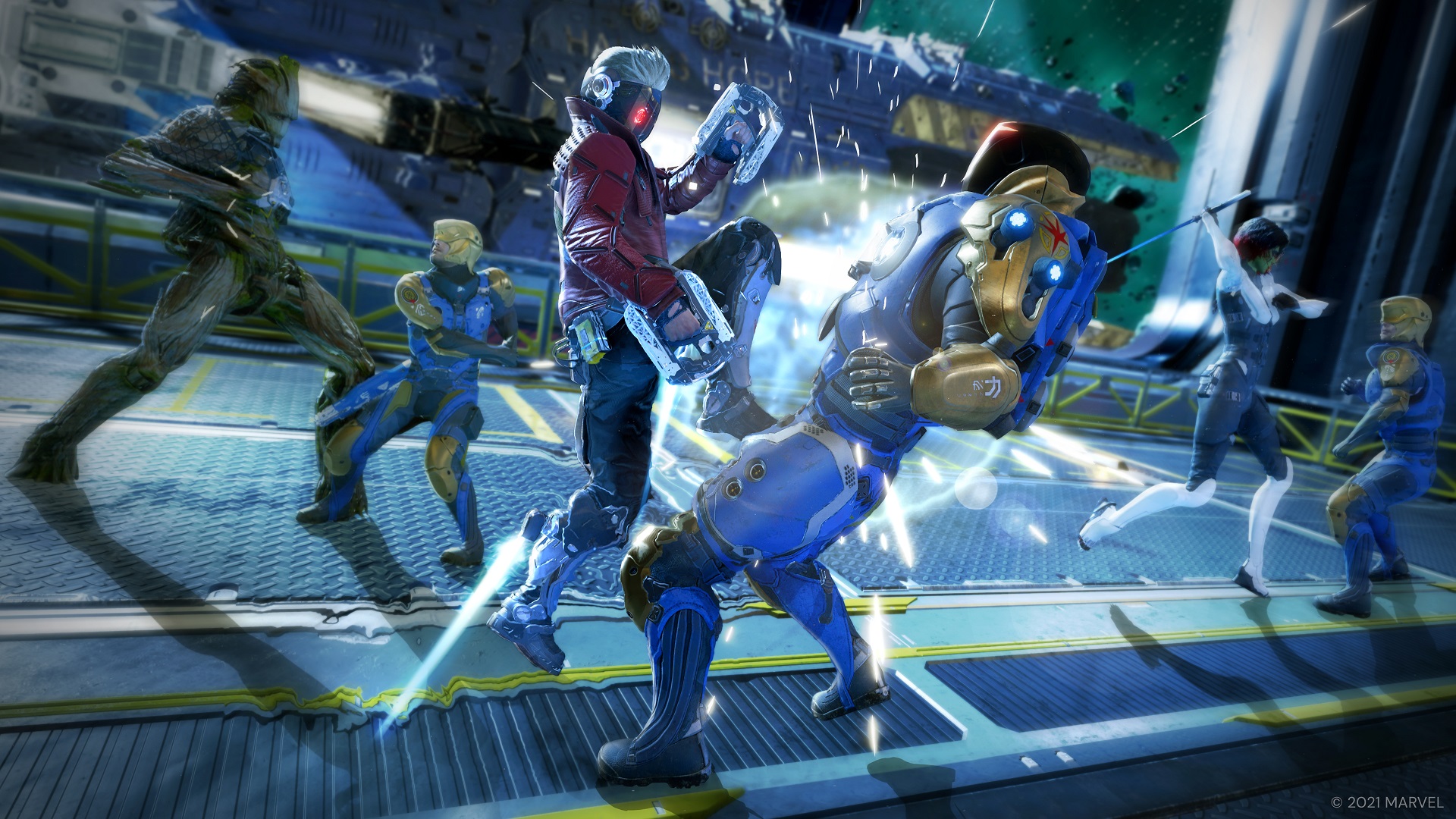 While you don’t get to play as Gamora, Drax, Rocket or Groot, you do get to order them around in combat. At any point during a fight, you can tap L1/LB to bring up the Guardians menu, select an active Guardian and then choose one of their skills. Each excels in a different way. Rocket and his area of impact skills are great for crowd control; Gamora’s skills with a sword make her excellent for dealing heavy damage to a single target; Drax’s tank-like abilities are extraordinary for staggering enemies; and finally, Groot serves as a support role with moves that can entangle enemies and heal you. Understanding how to use each of the Guardians is imperative for success as the game continues. You’ll start with only one ability per Guardian, but slowly unlock additional abilities by spending ability points. When considering the fifteen different abilities across Star-Lord and his companions, the various strategies you can come up with are amazing. Once everything clicks, it’s hard not to have a good time playing Marvel’s Guardians of the Galaxy.

It’s an absolute blast to play, though sometimes the action can get too chaotic. In particular, the lock-on, while excellent in smaller encounters, can get finicky in larger battles, making it challenging to target specific enemies. Unfortunately, aiming without the lock-on doesn’t have the precision necessary to make it viable against long-range enemies, as the gunplay was built around that lock-on. There are also different moves created to help Peter that ultimately cause more harm than good. For example, the boot thrust helps Peter get out of harm’s way when knocked down, but considering how many pits there are in each level, using the move is a surefire way to send yourself careening into the abyss. Marvel’s Guardians of the Galaxy’s gameplay fires on all cylinders the majority of the playtime, but some elements could have used tightening up.

Marvel’s Guardians of the Galaxy delivers a beautiful presentation that takes players across an exotic array of locations. From the bustling, seedy streets of Knowhere, exotic jungles of Seknarf-9, shiny interiors of Nova Corps ships and messy rooms of the Guardians aboard the Milano, it looks great regardless of whether you choose to play in Graphics or Performance mode. The real highlight, however, is the audio. The cast is fantastic, delivering a series of outstanding performances. Also fantastic is the soundtrack, thanks to a wide array of hit songs from the ’80s and original compositions that manage to accentuate the underlying drama and comedy. It’s a game that’s best played with a headset so you can rock out to all the great hits. Where Marvel’s Guardians of the Galaxy’s presentation falters is in its performance. Generally, the game manages to hit its FPS mark in both modes, though it can dip when too many effects and enemies are on screen at once. In addition, the game suffered from technical hiccups, including out-of-sync audio, missing button prompts and animation glitches. Eidos Montreal did put out a patch that has since fixed most of these issues. They were undoubtedly annoyances but never detracted from the story, gameplay and presentation much. 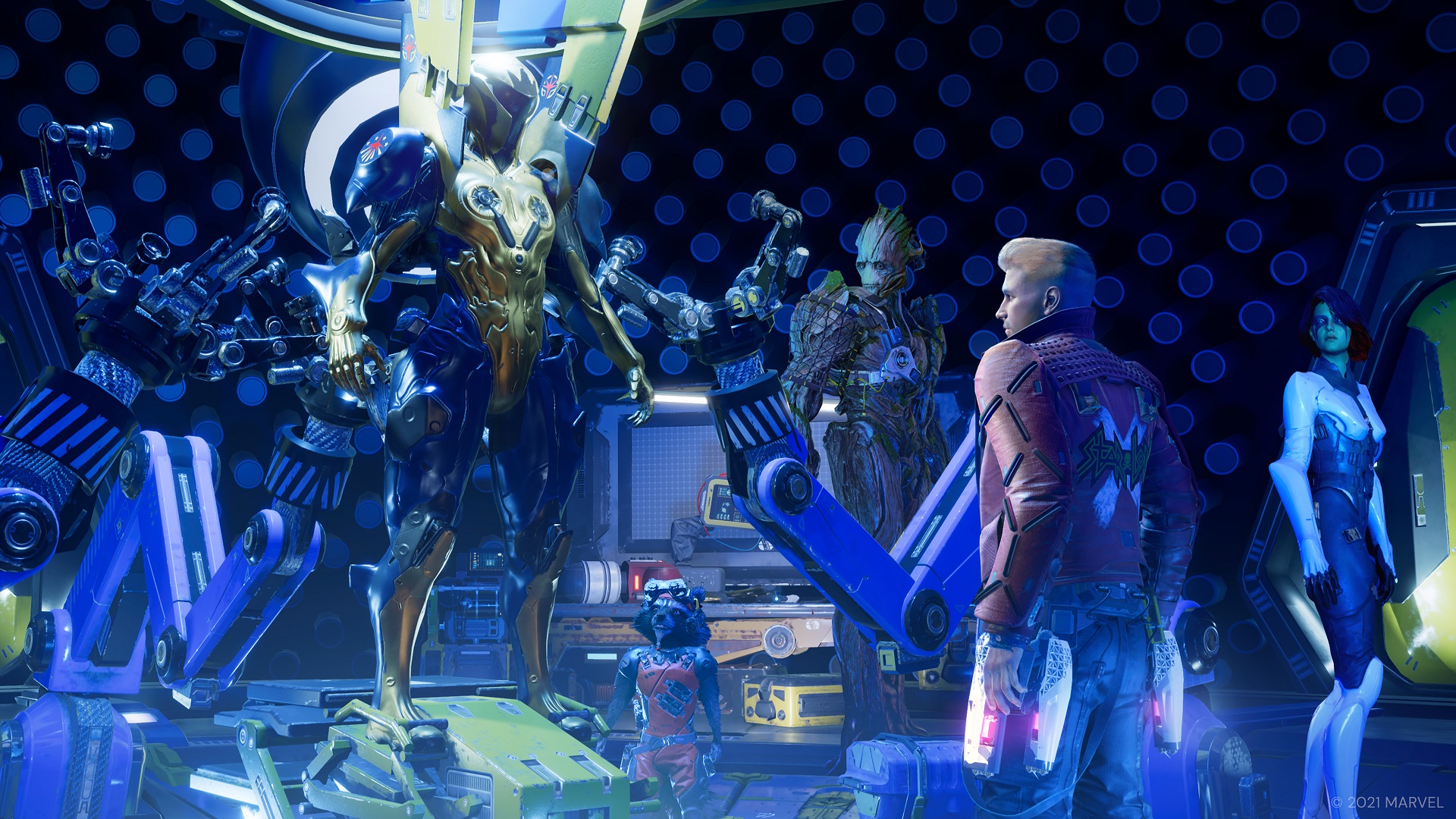 Looking back at E3 2021, many wrote off Marvel’s Guardians of the Galaxy. What Eidos Montreal and Square Enix showed seemed to miss the mark at every level. Too many jokes, only Star-Lord playable and questionable designs had many scratching their heads. It turns out that Marvel’s Guardians of the Galaxy shouldn’t have been written off. Eidos Montreal delivers a strong story filled with comedy and tragedy, great characters and a world that feels entirely unlike the Marvel Cinematic Universe. They’ve compiled a lengthy adventure that’ll take players to new and familiar locations and built out a great gameplay system that utilizes all the Guardians’ best attributes. The lock-on could be better, and some of Peter’s abilities could be better rebalanced to suit the level design. Still, the gameplay is otherwise an excellent blend of third-person shooting and strategy. It’s undoubtedly a beautiful game to explore thanks to top-notch artistic design, and it’s even better to listen to thanks to a strong soundtrack filled with ’80s hits and original tunes. Technical issues do crop up, but the recent patch released by Eidos Montreal has smoothed over many of our concerns. Marvel’s Guardians of the Galaxy is a great game that does the Guardians proud, so grab your Elemental Blasters, strap in and get ready to rock.