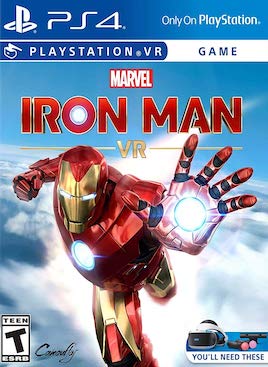 When it comes to first-person shooters — or just the usual experience that’s often so emblematic of aiming in first-person — VR still finds itself in the awkward position of its successes getting far outweighed by its failures. There are cases where this transition pays off, where a game manages to avoid the pitfalls of motion-controlled technicalities and gameplay variety, for the idea to seem worthwhile. And not only do we find a great reimagining now and again of some originally non-VR title like SUPERHOT, but there are also original works like Blood & Truth and Pistol Whip that rather than simply adapting to the new perspective, embrace it fully. Striking aesthetics and far-from-conserved presentations matched by some nuanced takes on the very mechanics of aiming.

It’s not that the challenge with Marvel’s Iron Man VR was in constructing some entirely new perspective on first-person shooting. If anything, the challenge standing before developers Camouflaj almost seems the complete opposite. With a character and major cultural brand that Iron Man is — both inside comics and, as we’ve now seen in recent years, outside of it — the challenge is more or less meeting what is presumably the potential and expectations that a character like Iron Man brings. A character that’s not known to simply stand static post as cleverly-disguised shooting targets come hurdling towards one’s pre-determined width of shooting gallery space. In hindsight, the reveal trailer may have sold the concept short — instead giving the impression that this latest Marvel-branded, PlayStation-exclusive foray was a mere on-rails affair. Don’t get me wrong, on-rails shooters can still be fun, but you’d think for a brand as iconic and world-renowned as this, the game would be better served fully committing to what the action of an Iron Man-like superhero would entail.

The potential for a 6DoF (six degrees of freedom) FPS, whose gameplay ditches completely the restrictiveness of some “shooting gallery” get-up, was there for the taking. Favoring instead an environment to explore, skies to blast through, enemies to weave between. Above all else, a faithful keeping to a simple-but-effective mantra that made 2018’s Marvel’s Spider-Man such a winning, welcome return to form. An iron-clad power fantasy whose VR application is more than mere window-dressing, but could actually make you feel like a guy in an over-powered exoskeleton countless thousand feet in the air. Unfortunately, in boldly striving to match the cultural heights of the comics and the movies with both comical writing and slick, mainstream flair, Marvel’s Iron Man VR spends less time nailing down the basics. 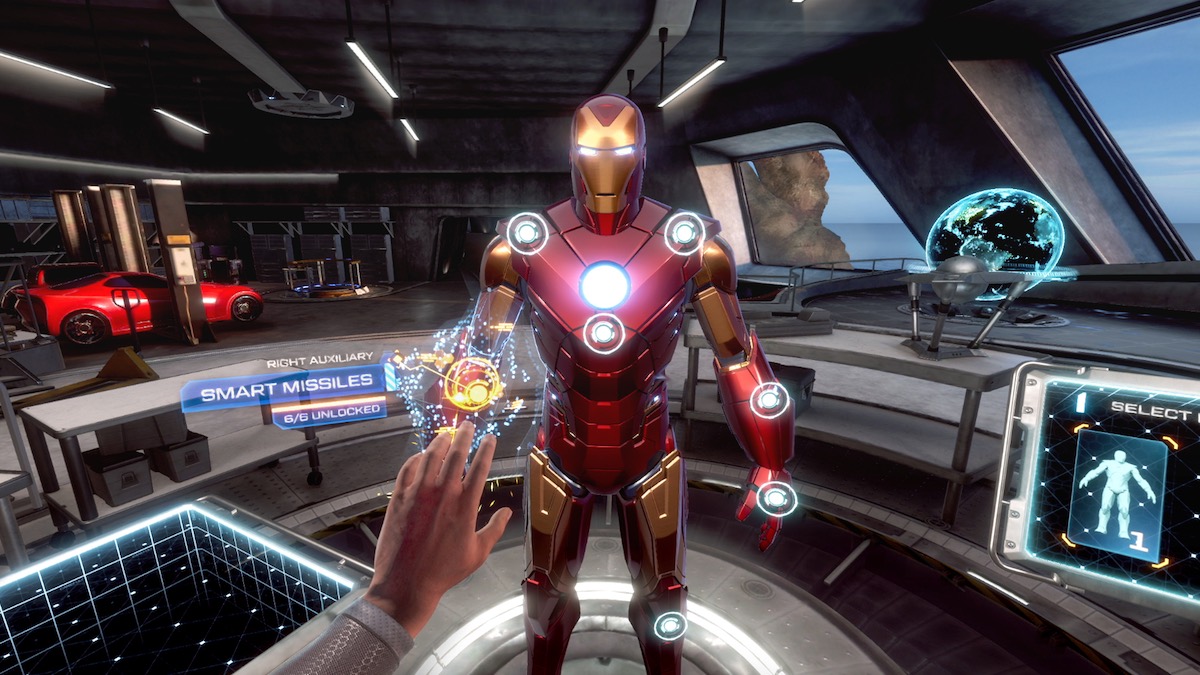 The basics being that in order for a VR effort to be approachable, let alone enjoyed, the foundation — be it technical, mechanical or both — has to be perfect. Here though, it’s far from. It’s not a total failure by any stretch. In fact there are some serviceable-come-sufficient flashes of enjoyment to scrounge together throughout the twelve main missions and add-on challenges. The problem, like a lot of games so heavily reliant on motion controls running without a hitch, is that Marvel’s Iron Man VR throws up way too many an issue for such flashes to last. To the point wherein the latter missions arrive and the challenge eventually comes, but you’re so focused on simply getting over to a nearby location, everything eventually begins to stack against the player. The momentary breaking of one’s virtual wrists — watching as the hands of this faux-charismatic interpretation of Tony Stark flip to then erratically shake mid-screen — can be passed off in the early parts.

As can the very specific spots of in-game space the game denotes as you attempt to warp from one point to the next when exploring 3D space outside the suit. Even the occasional indulgence of a mini-game or two (even just exploring the Stark mansion in-between mission) can have its less-than-fluid controls forgiven. On top of the pun-a-minute dialogue that so desperately wants to remind us of Tony Stark’s recurring snark and ego. Of which also finds time to inject a bit of expository backstory accompanying a black screen or downright indecipherable dialogue from a technically on-screen (though far from present as far as personality goes) villain. But when these problems arise mid-mission, the once dismissible, unintended humor of breaking one’s in-game wrists for example becomes a much more troublesome and sadly definable trait of what this game really is. 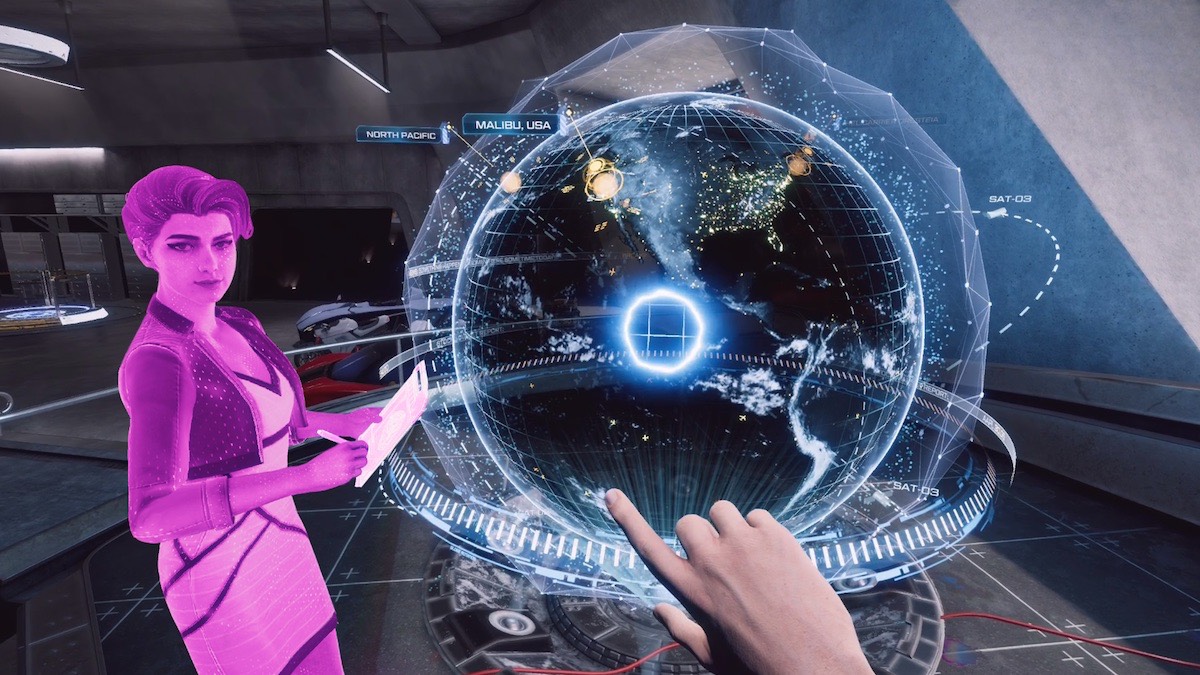 In short, Marvel’s Iron Man VR can be, at its worst, an utterly atrocious and unrewarding game to even attempt to adapt towards. The mechanics of moving and flying about an aerial space, though not ideal, are serviceable in the grand scheme of what it’s hoping to achieve. Requiring one to position both PlayStation Move controllers so as to alter one’s trajectory. Palms flat allowing you to hover in place; opening them outwards causes you to move backwards, while placing them behind you in the opposite direction allows you to blast forward. It takes a couple of chapters to get used to things and there are points where the game seems to fluctuate on how delicate (or hard) one must be.

When combat is introduced is where things start to take a turn for the worst and ultimately reveal the dire shortcomings as an attempt to be an immersive 6DoF shooter. It’s bad enough that the game will often struggle to work out which of the two modes of fire the player is attempting, whether it’s the faster, frequent energy shots or your projectiles which lock onto targets after a cool-down period. Both palm-open and pointed-forward arm stances often getting mixed up with one another. A major oversight when you find yourself amidst a heated confrontation with many of the repetitive and lacking-in-variety drone enemies. Particularly for those types that require you to think fast upon a temporary shield dropping or ground-type enemies that themselves duck and weave between buildings — requiring to handle both movement and rate-of-fire at the same time. 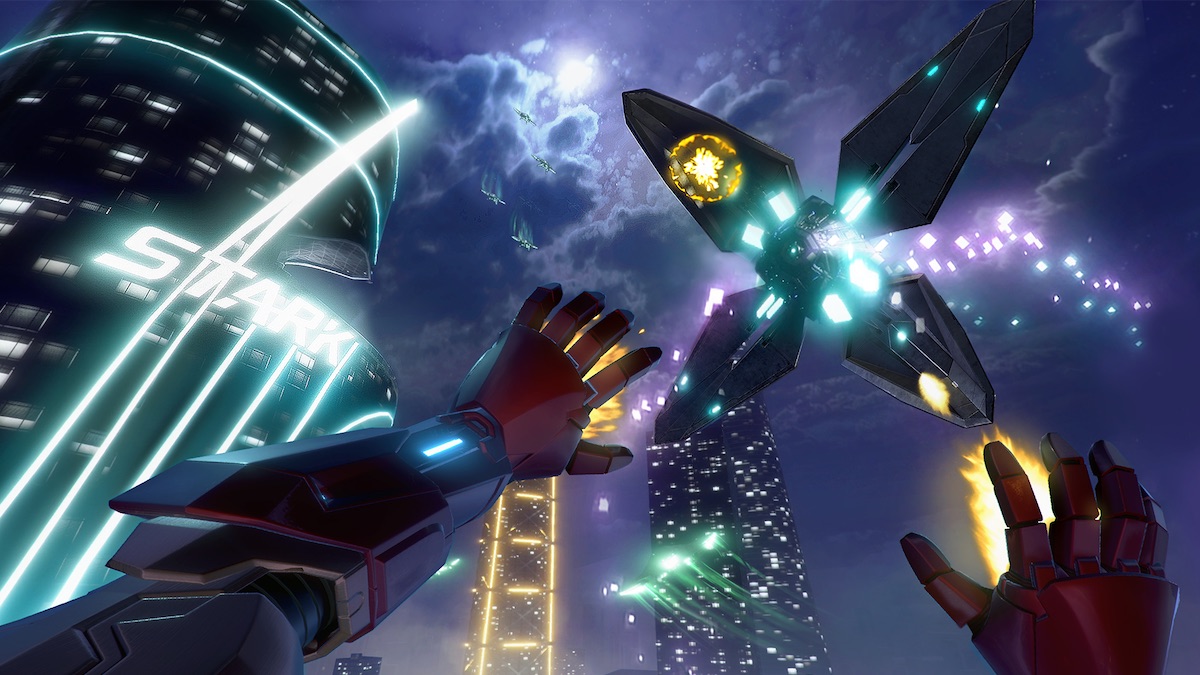 There are some countermeasures and means to make things a tad easier, such as an instant hover function that freezes you in place for a brief time. Allowing you to focus completely on taking out enemies, without having to also keep yourself from falling. The problem though is that not only are foes frequently darting beside and behind you — with both a map and warning indicators that are nowhere near accurate enough — but the challenge is, from such an early period, built on the pretense that you’ll have mastered movement to the point of briskly weaving from point to point. This is not the case and worse, much like your movement, the game feels like it’s never sure just how much of a formidable force you actually pose amid battle. At one point, you can so easily be swatted away like a fly and have as much fortification as a balloon against enemy projectiles. The next you’re struggling to get any kind of momentum with your thrusters, it almost feel like you’re pinned down in place.

Ironic then that the only real highlights in Marvel’s Iron Man VR — in a game where piloting a seemingly-indestructible suit with plentiful fire-power should be its appeal — are the moments that don’t involve combat. Wherein you’re tasked with simply setting the fastest time as you speed through a set number of rings or you’re left to freely fly around a given environment. But the game seems almost required to batter you over the head with mundane mission objective after mundane mission objective so as to justify its hundreds of cannon-fodder and poorly-disguised road-blocks. As such, in struggling to get the motions working properly, the core gameplay loop eventually loses its pull and becomes just as tired and as one-dimensional as something like Disintegration with its poor excuse for progression. You can so easily guess what comes next when an objective has you blowing up one large sphere, then two large spheres, before proceeding to the final objective. Or when a timer or requirement to defend a position aligns up with the number of enemies left on the field to dispose of. 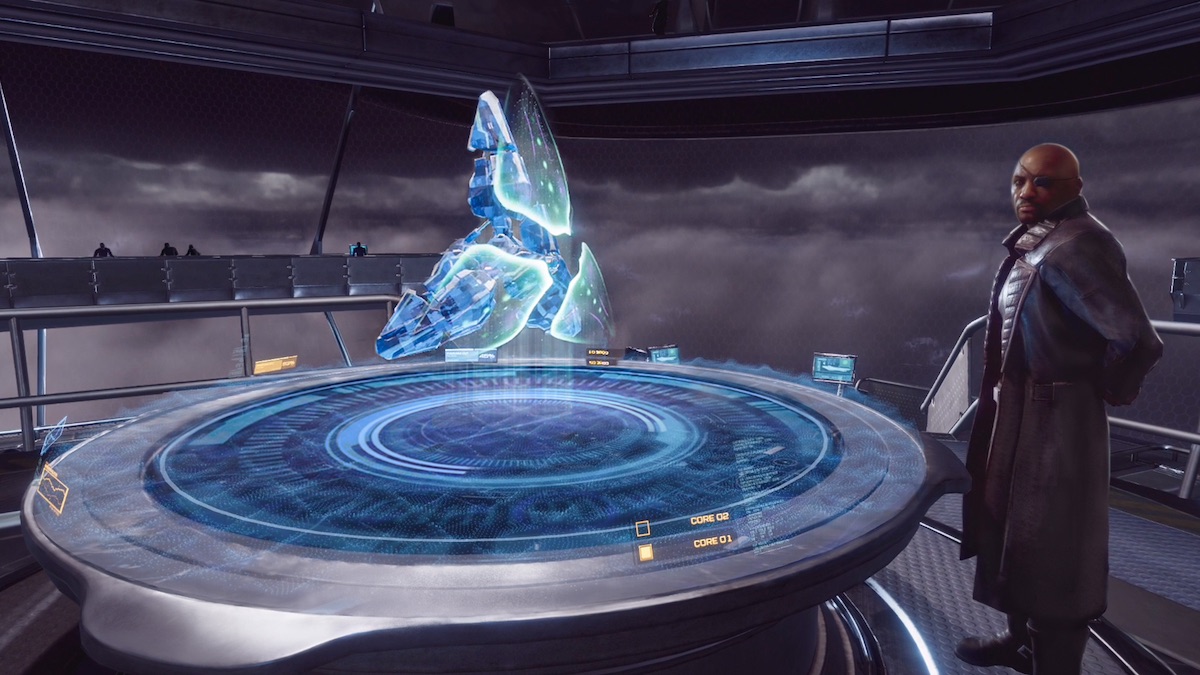 Crushed beneath a monotony of drones to trash, muffled dialogue to decipher and environments to float amidst, there are brief pleasantries and welcome respites in Marvel’s Iron Man VR. Distractions that unfortunately amount to the only genuinely welcome highs in a VR effort that, commendable an effort it is to move out of the regular shooting gallery format, are wound up in one too many technical follies and lackluster mission objectives for the implied liberties to feel substantial. Yet in a game with such dire over-reliance on its players treating its controls and combat — both at the same time — like second-nature, when the erroneous ways with motion controls crop up, the damage to one’s time (and thus one’s enjoyment) is far more detrimental. Appeasing fans with its source material, on its own, is a harmless endeavor. So long as there are little difficulties and confusions with the gameplay accompanying it. Marvel’s Spider-Man proved what good-will can be generated out of such licensed iterations, when wielded properly. Marvel’s Iron Man VR, however, is a flawed but ultimately frustrating effort to sell. Twisting the once-attractive proposal of being Iron Man into a clumsy misdirection.