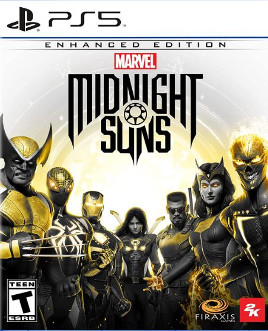 Marvel properties have had an inconsistent history with games. Anyone interested in their newest title can immediately think of some game they love the refute that statement, but there’s an equal amount of confidence that some dreadful title will just as quickly come to mind. But given how their superheroes are perfectly designed for video game adaptations combined with the increased mainstream popularity from the movies, it seems like a no brainer to try to put these heroes into more games. Marvel’s Midnight Suns is the latest endeavor to bring these heroes to the interactive screen in the form of a tactical RPG.

As is generally the case, Hydra is up to no good. Doctor Faustus has resurrected Lilith, Mother of Demons, which leads to an attack on Sanctum Santorum, where Iron Man, Doctor Strange, Captain Marvel and Wanda Maximoff ward off their attackers. After the conflict is over, Wanda remains to protect the Sanctum while Strange takes the others to the Abbey where they meet up with the Midnight Suns. To fight Lilith they decide the best course of action is to resurrect her killer who has been peacefully resting for the past three centuries. This is where they meet the Hunter, the main protagonist.

The Hunter serves as the player’s avatar who is a brand new hero. The Hunter’s backstory is established as Lilith was killed by the Hunter centuries ago and the twist is the Lilith was the Hunter’s mother. The Hunter’s general personality and backstory are set in stone, but players can customize the Hunter to their own liking, including gender, ethnicity, hair color and eye color. Once resurrected, the Hunter needs to get acclimated to the ways in which the world has changed over the past few centuries, but surprisingly culture shock is relatively mild all things considered. 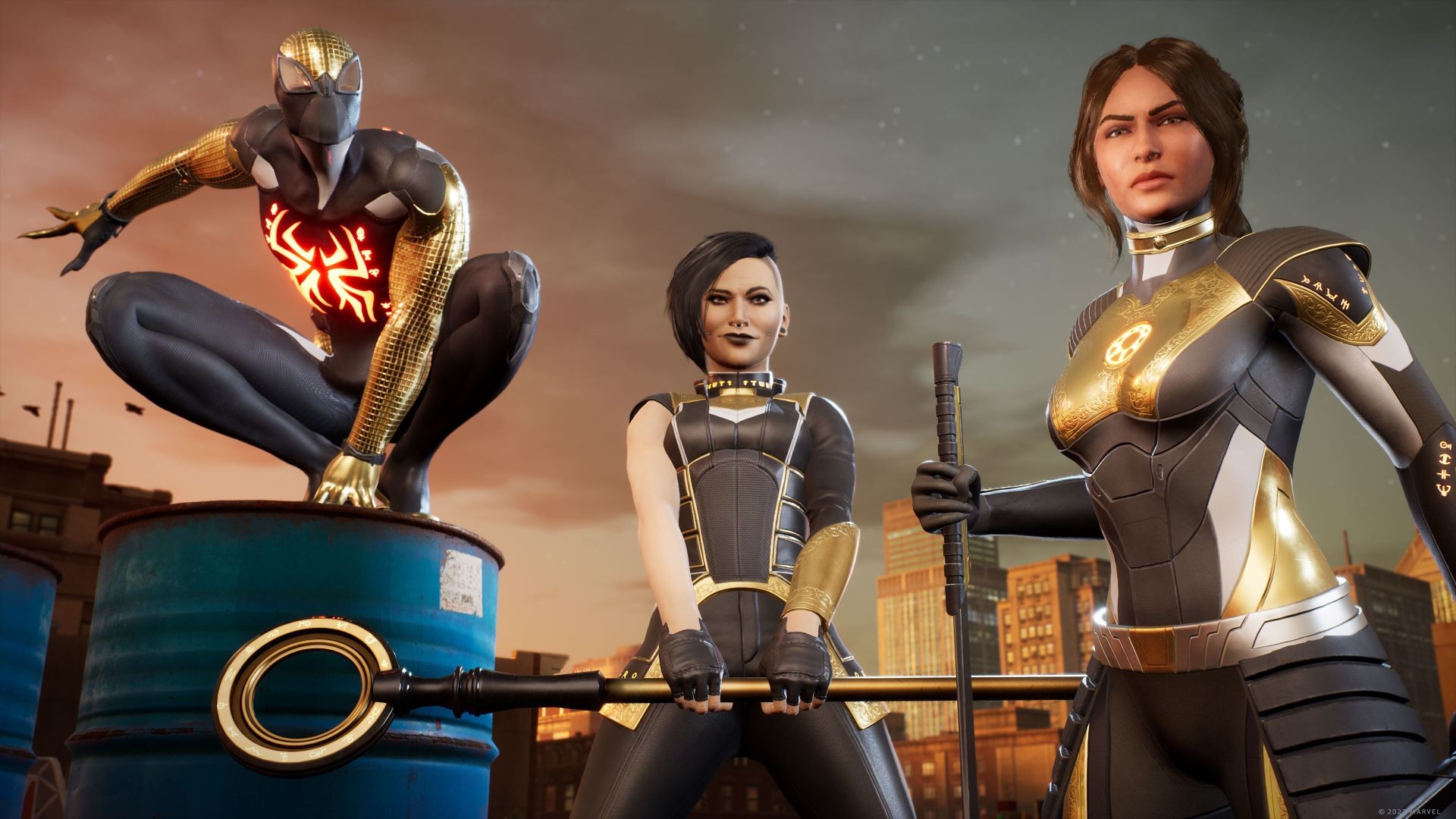 The story is primarily advanced through completing missions objectives, battles assigned from the war room. But in true RPG fashion, there’s a lot to do at the Abbey when the player isn’t duking it out with super villains and Hydra cannon fodder. The Abbey is a hub of activities to keep players busy. There are plenty of secrets that an intrepid explorer could uncover by wandering around the grounds in their free time. Having access to Tony Stark and Strange in the Forge allows the player to use the items they acquire to create and upgrade their card abilities along with upgrading the Forge with new features. The Hunter has their own room where Gloss points can be spent to decorate and customize the dwelling. Training with other heroes is a good way to get temporary buffs when that hero is brought into combat, plus it’s a good way to increase the friendship level with that hero.

With so many heroes sharing space inside the Abbey, it’s not surprising that social interaction is emphasized. Superlink is a social media network developed by Stark Industries. It’s not that different in functionality than real social media platforms, except this one is exclusive to Super Heroes. The player has less freedom about generating their own posts as its function is more about responding to direct messages and reading other characters’ posts, but some of the comments can get entertaining. Talking to the other heroes can help increase the friendship, which can have beneficial effects in combat when their bonds are stronger. Certain dialogue options will lean toward either a light or dark alignment, where maxing out those stats with particular heroes can play out in different ways. Other activities to increase friendship include sparring with other heroes or engaging in hangouts, such as reading books together or watching movies. There are a few hidden havens around the Abbey, which can be used for special hangout sessions. When it’s time to take a break from the day to day at the Abbey, just head over to the War Room and the Hunter will be directed to the Mirror Table to take on a mission.

Battle is fought in a turn-based tactical arena. Each hero has their own unique abilities that are represented by cards. Everyone has eight cards equipped and they’re randomly drawn at the start of each turn. The cards are divided into different types: Attack, Skill and Heroic. Attacks are self explanatory, these are the cards that are meant to take out Hydra forces. Skill cards are generally support actions, such as buffs or healing. Heroic cards require heroism points that are generated by using the other cards, which tend to deal excessive damage, hit multiple targets or have other effects. Besides the cards, certain environmental hazards exist on the battlefield that can be used to dispatch Hydra forces without costing the finite card uses in each turn. The Hyrdra enemies typically fall into three different types: Minions, Elites and Bosses. Minions will die from any attack and Elites have health bars and can be more difficult to deal with. Bosses are often supervillains and these enemies are in a completely different class than the underlings. 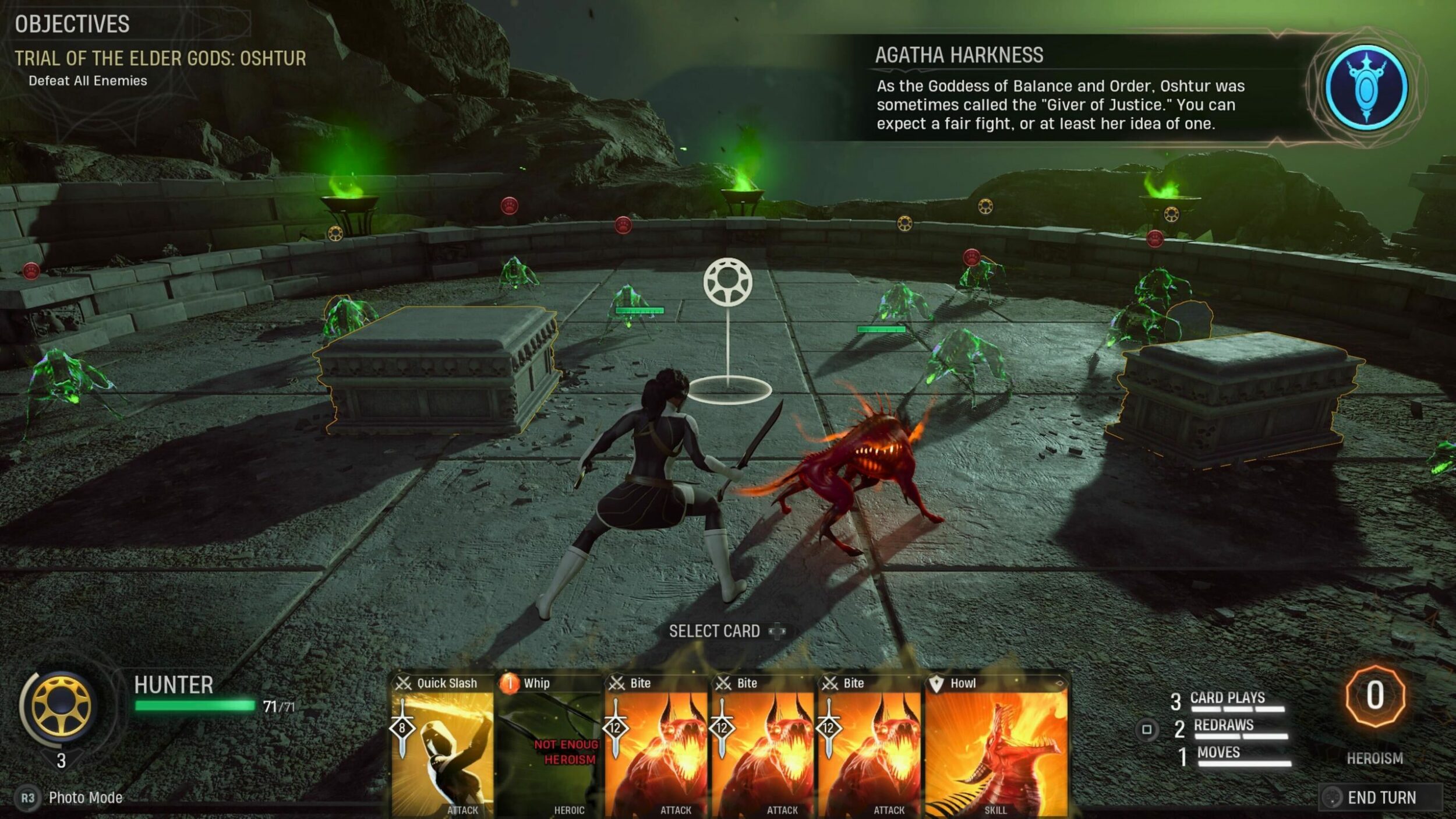 The general objective of each battle is to defeat every enemy on the board. Some battles have specific objectives, such as taking out a helicopter or truck before it can leave or acquiring some artifact. In these skirmishes once the primary objective is achieved, players are instructed to take out all remaining enemies. Battles generally start with a small number of enemies, but reinforcements keep coming in for several turns after. Higher difficulty levels tend to have more reinforcements and less revive cards. The deck-building aspect of battle randomizes player’s strategy since only a portion of their equipped cards are available any given turn as opposed to a system where each character has a set amount of commands every turn. Because of this the three cards actions each turn could all be from one hero instead of one action from each of them. Players are limited by the card selection in each turn, but they’re free to act in just about any way the cards allow which can sometimes lead to interesting combos from the various heroes. The destructible items in the battlefield are another strategic consideration in addition to the fact it’s just fun to knock enemies into each other or breaking crates over their head. Not surprisingly the battle mechanics will draw comparisons to other tactical games such as XCOM. The battle system is well executed in that it’s both challenging and extremely fun, though sometimes it seems like waves of reinforcements can get excessive.

Between the tactical combat and day-to-day activities at the Abbey, Marvel’s Midnight Suns is an absolute joy. The combat’s excitement never wanes throughout the game. Exploring the Abbey outside of battles is a fun way to unravel the mysteries of the Hunter and Lilith’s history. Getting to know the other heroes adds a sense of vitality to the world, though it would have been nice if the dialogue trees were further developed. The choices in conversation always seemed limited, and outside of circumstances where light and dark qualities were affixed to answer whatever was said in conversation, didn’t seem that impactful. There were a few times when the conversing hero clearly wasn’t happy with what the Hunter said, but those instances weren’t common. The simulated social life through hangouts is an interesting way to learn more about the stories of each character. The social activities and character bonding aren’t the most developed and advanced approaches to grace RPGs, but they’re good enough to elevate Midnight Suns to being a worthwhile game. 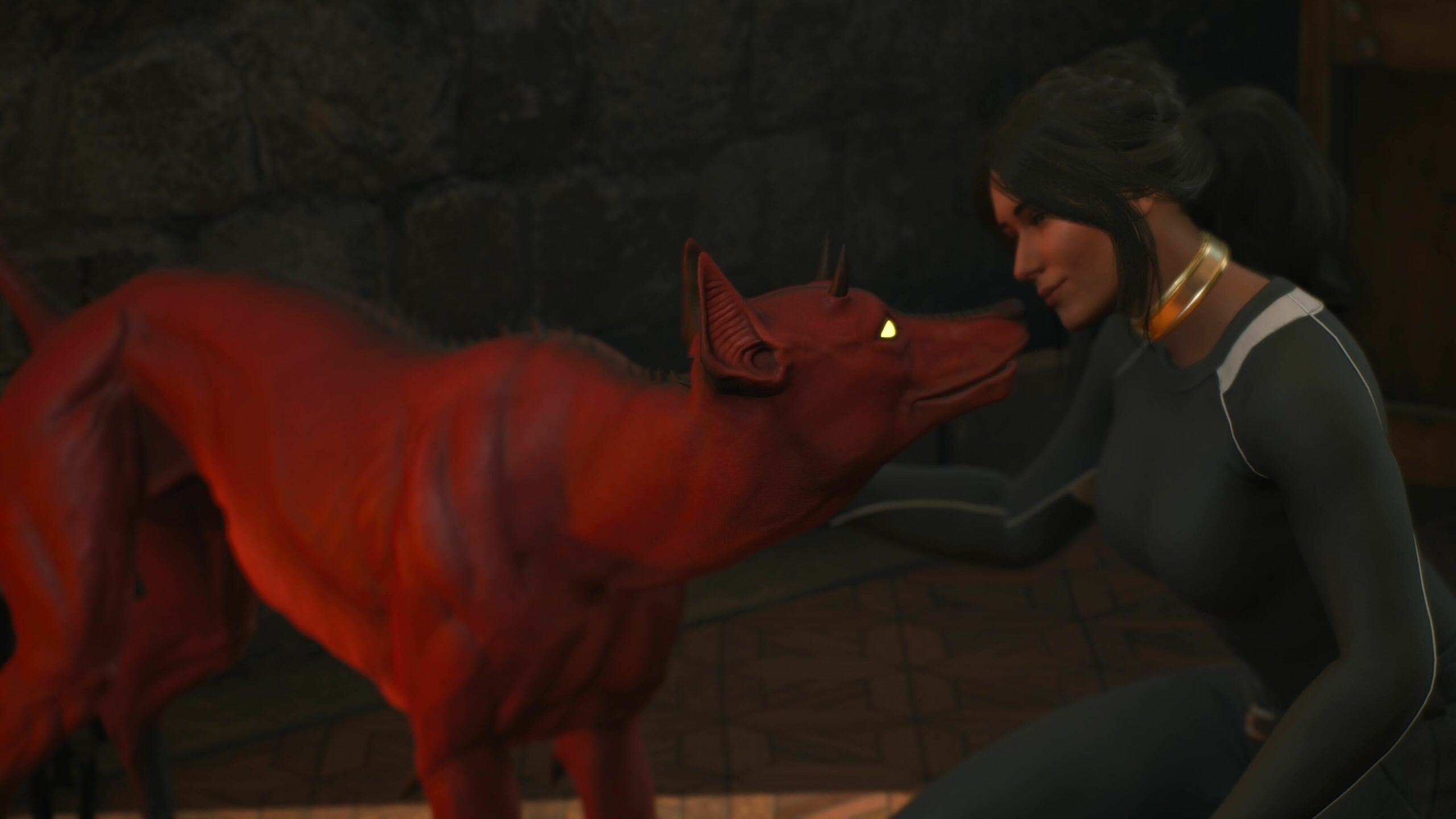 Marvel’s Midnight Suns pulls all its different elements together to create a memorable tactical RPG. The combat is the main event and its execution resulted in every battle being an enjoyable event, whether it was taking on a nefarious supervillain or relieving Hydra of the ownership of a valuable artifact. Outside of battle, life in the Abbey is full of activities and social interaction with other super heroes that greatly flesh out its RPG elements. The dialogue trees aren’t the most in depth ever created, but they’re fleshed out enough where they help the world feel alive and worth saving from Lilith. The end result is a game that isn’t just a must play for superhero fans, but one that should be experienced by RPG fans in general.