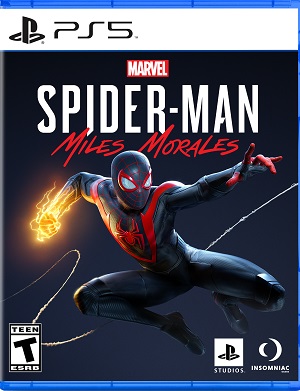 Marvel’s Spider-Man: Miles Morales picks up roughly a year after the original game and its DLC. Having spent most of the time training under Peter Parker, Miles finally gets his chance to shine after his mentor goes on a much-needed vacation. After Peter leaves, however, a gang war between Roxxon Energy Corporation and the mysterious Underground breaks out, leaving Miles to defend his new home in Harlem as he tries to uncover the reason for the animosity. Despite being much shorter than the previous game’s story, Miles Morales delivers a focused, character-driven plot that expands the titular character into his own, individual Spider-Man. The short length does the plot plenty of favors, forcing the game to focus on select characters and properly build their relationships.

The story’s strength lies in Miles Morales, who goes from side character to spectacular main character. Insomniac Games did an excellent job defining his personality, making him a character easy to root for thanks to his genuine care for the people of New York City. He’s no Peter Parker clone and brings as much to Insomniac’s Spider-Man world as Pete himself. A colorful cast of side characters helps fill out the rest of the narrative and help define the kind of hero Miles wants to be. While the story does an excellent job building Miles as a unique character, it isn’t so great with plot twists. Much of the plot is rather predictable, with few genuine surprises, nor does it advance any of the plot threads left open in the original game. It’s no surprise that none of those questions were answered considering there will be a sequel, but it’s surprising how few surprises the story contains. Getting through the story will likely take between 8-10 hours. It’s noticeably shorter than the original game, but considering the lower cost-of-entry, it’s a decent length. On top of that, Miles Morales provides a wide array of optional missions and activities to pursue. Overall, you’re looking at more than twenty hours of content, and you can even hop back in with everything unlocked in New Game +. 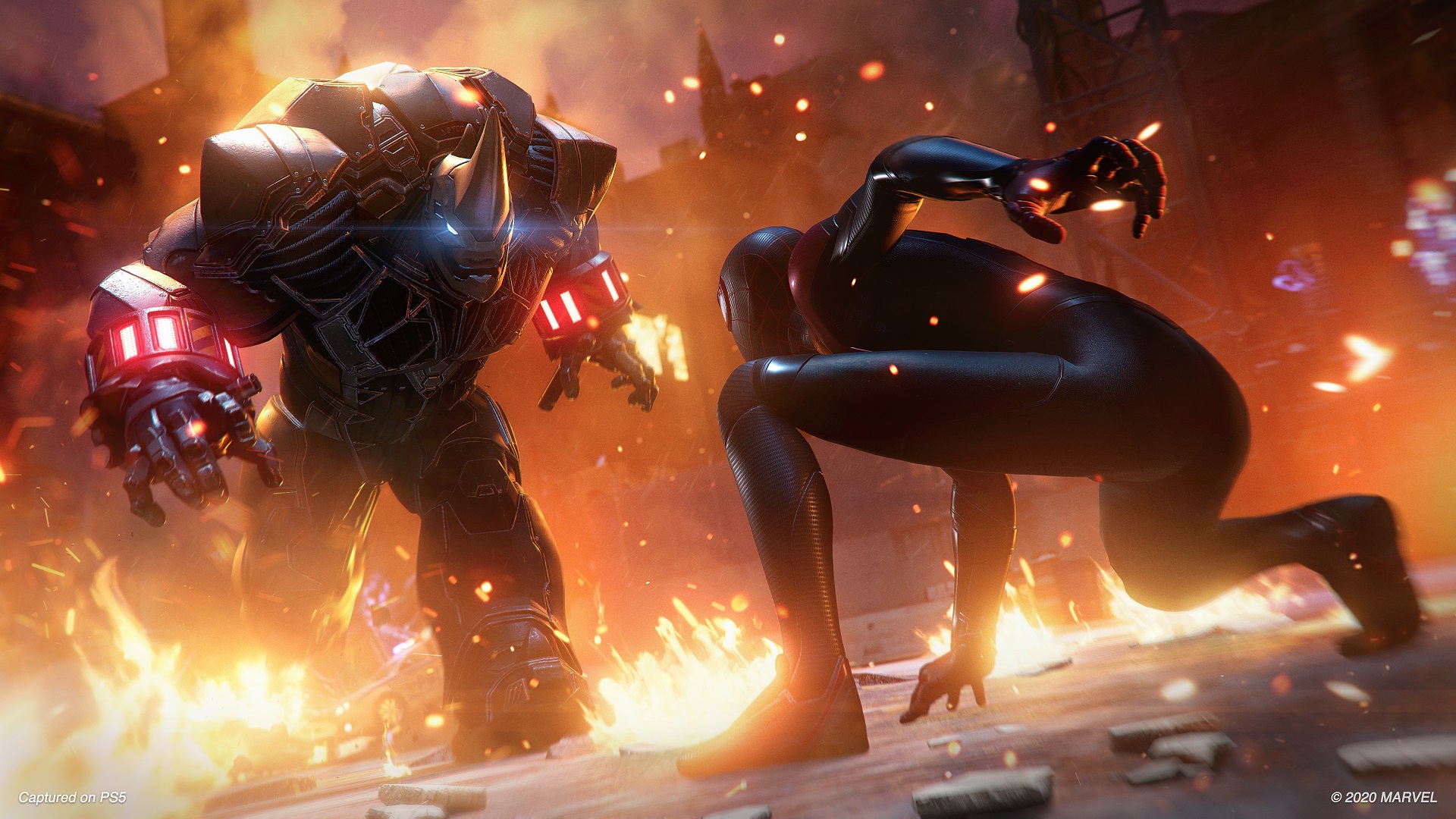 Marvel’s Spider-Man: Miles Morales is most analogous to Uncharted: The Lost Legacy. The Lost Legacy shared a lot of DNA with Uncharted 4: A Thief’s End but managed to carve out its own identity thanks to its different characters and setting. Miles Morales works like that. You may play as a Spider-Man, and you may be swinging around New York City, but there’s plenty of differences that make Miles Morales feel distinct from Marvel’s Spider-Man. The bones of Marvel’s Spider-Man’s gameplay remain intact, with players stringing together various ground and aerial attacks, dodges and stealth to incapacitate enemies. The free-flow combat remains fluid, allowing players to perform flashy moves efficiently and possessing enough depth to enable masters to create even more dazzling moves. Familiar enemy types also return, allowing returning players to jump back into the rhythm of things quickly.

What sets Miles apart from Peter is a unique set of moves. While Peter’s combat involves more gadgetry, Miles uses electrical powers dubbed Venom to damage and stun enemies. This makes Miles a much more aggressive character to play as compared to Peter. They’re fun powers that become vastly important in combat as they help you maintain control of the battle. Venom isn’t a get out of jail-free card, though. Each attack costs an energy bar that’s shared with health regeneration. There are also new enemies capable of suppressing Venom-based attacks. The attacks are fun and powerful, but there’s still strategic depth about when to use them.

Miles’ unique powers also affect stealth as he, unlike Peter, can Camouflage. This allows Miles to escape encounters and reposition himself or get up close for stealth takedowns. Stealth was already easy in Marvel’s Spider-Man and Camouflage makes it easier. The HUD still feeds players information about when it’s safe to attack. Meanwhile, enemy AI remains incapable of detecting someone in a noticeable suit in broad daylight. Altogether, stealth is too easy and you’ll want to consider raising the difficulty if you’re looking for more of a challenge. From a design perspective, players get full access to the entire New York City map of the original game, including an expanded Harlem. There’s still plenty of activities to participate in, collectibles to find, challenges to complete and crimes to stop. No, there are not as many activities as the original game, but there’s enough to keep players entertained for hours, along with plenty of good-looking suits to unlock. 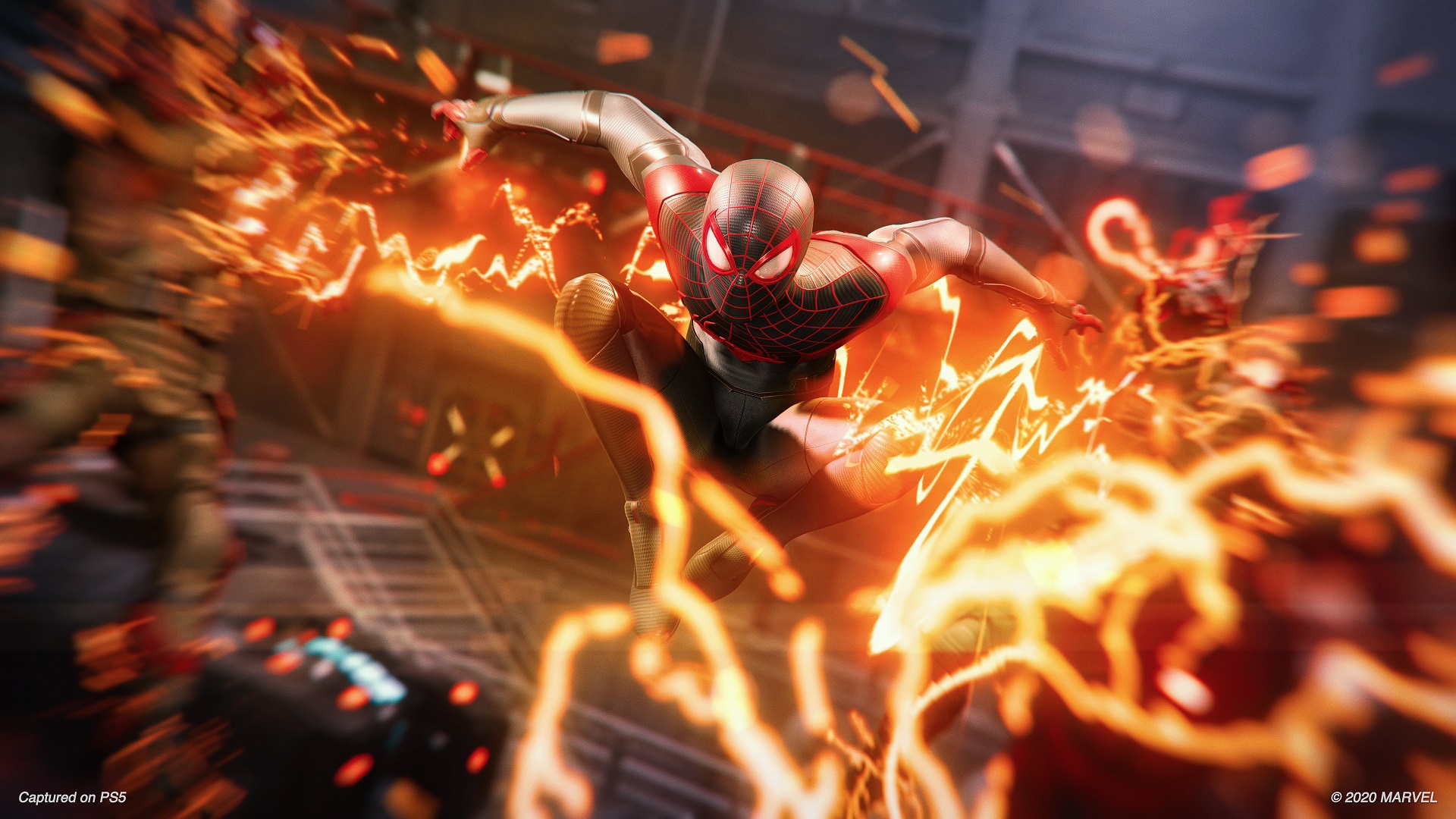 Tying gameplay and world design together is web-swinging, which still feels so perfect. Insomniac Games nailed web-swinging back in 2018 and it’s still great here. The ability to swing back-and-forth from any point on the map remains an exhilarating act that’s amplified by the PS5’s increased power and SSD, which makes getting from Point-A to Point-B feel that much snappier. It also helps that the SSD nearly eliminates load times, making traveling across the city, booting up the game and loading a save file completely painless. Marvel’s Spider-Man: Miles Morales does share a lot of DNA with Marvel’s Spider-Man, including the map and gameplay mechanics, but the game does plenty to keep players entertained in its snowy version of New York City. Miles’ aggressive gameplay feels a lot different from Peter’s gadget-focused combat, giving combat a new twist. There’s a lot of new things here to keep players invested.

Marvel’s Spider-Man: Miles Morales launches on both PS5 and PS4. Though the game looks and runs fine on PS4, the PS5 version manages to outshine it and provide a glimpse into the power of the console. Whether playing in Fidelity or Performance mode, the game looks superb with better-looking textures, skin shaders, better draw distances, effects and lighting. It’s an impressive introduction to PS5 and each mode offers something different. Fidelity mode cranks up the graphical offering by including impressive hardware-based ray-tracing, which makes New York City’s many skyscrapers feel more real as you swing by them. Performance mode replaces ray-tracing and other visual effects to give players a smooth, 60fps experience. Both are awesome and great, though it would have been nice to have perhaps gotten them both in a 1440p mode rather than having to choose one or the other.

Marvel’s Spider-Man: Miles Morales is an impressive technical showcase for the PS5 despite also launching on PS4. Insomniac Games have delivered a stunning-looking game, all while incorporating many of the fanciest features of the PS5. It’s not perfect; there’s still plenty of enemies clipping through objects during perch takedowns and the camera tends to freak out in tight corners, but that doesn’t detract much from the fact that this is a strong first showing for the PS5. 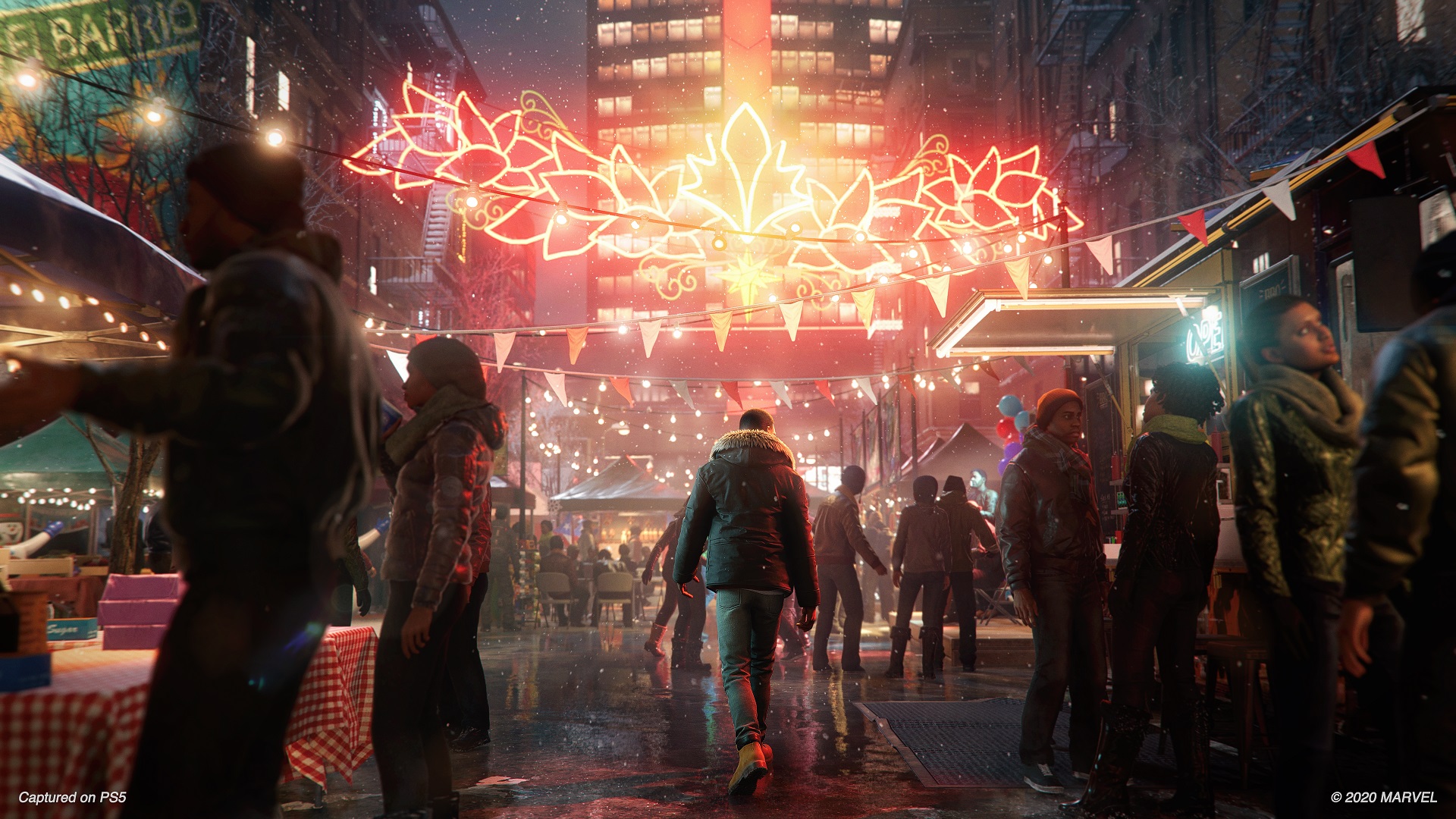 Marvel’s Spider-Man perfectly revitalized the Spider-Man gaming franchise back in 2018 and Marvel’s Spider-Man: Miles Morales is an excellent follow-up. Insomniac Games has built a game that uses the bones of the 2018 title to tell a new story and inject new gameplay elements. The story may not be all that surprising, but it’s told superbly with a strong focus on developing Miles and his friends and family. Combat may start similar, but Venom’s introduction adds a shocking punch to the proceedings, though the other new addition, Camouflage, makes stealth too easy on the default difficulty. Swinging around New York City remains as exhilarating and fluid as ever, even if it’s mostly the same map. Though the insanely-fast loading times of the SSD make getting around that much smoother. The game visually looks good on PS4, but it’s on PS5 where the game truly shines thanks to enhanced graphical details and next-gen techniques like ray-tracing and 60fps gameplay. It’s disappointing, however, that there’s no graphical mode that allows you to experience all next-gen features together. Marvel’s Spider-Man: Miles Morales is a follow-up to a great game you shouldn’t miss, and makes swinging into next-gen a breeze.