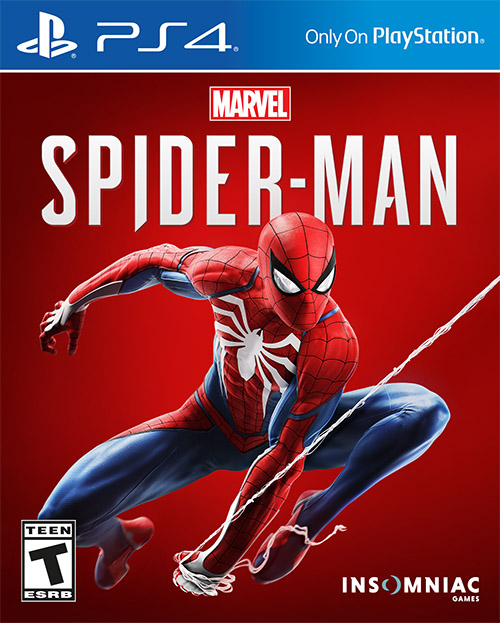 Video games based on comic books have been around since the Atari 2600 and Spider-Man in-particular was among the first to be released. Ever since then, various publishers obtained the popular license to make their own games, most notably Acclaim and Activision. The latter is no doubt fresher in the minds of players, especially considering well regarded studios such as Treyarch, Neversoft and Vicarious Visions all worked to create some surprisingly decent adventures, be it tied to a film or not. That’s all in the past now, as Marvel has teamed up with first-party publisher Sony and Ratchet & Clank developer Insomniac Games to design a Spider-Man game worthy of the name. Considering Marvel and their cinematic universe is one of the hottest entertainment entities in the world, it only makes sense that a major publisher such as this would want a taste of it, especially when Sony Pictures still holds the rights to Spider-Man films. Sony Computer Entertainment is able to pour a lot more resources into project, creating a story-driven experience like no other. Marvel’s Spider-Man contains the recipe of success: fast-paced brawler combat, an immense open world to explore, its own enthralling story and of course numerous villains we’ve all come to love. Being one of the most anticipated games of the year, can Marvel’s Spider-Man swing its way to success?

Spider-Man is no different from any other comic book franchise, as there are an abundant alternative takes on the quippy protagonist, be it a gritty noir or egotistical futuristic version. Insomniac Games’ interpretation isn’t far off from what we’ve come to expect when you hear the name Spider-Man. It has the familiar faces we’ve become accustomed to, such as Peter Parker, Mary-Jane Watson and Aunt May, while establishing more recent additions to the franchise (at least within the last decade) such as Miles Morales and Yuri Watanabe. You don’t have to be a long time fan who knows every single one of the webslinger’s adventures to appreciate the story, especially considering there are extensive bios for everyone you meet, but it helps as there are plenty of references that will undoubtedly go over the heads of newcomers. The dialogue itself is well written as it captures Spider-Man’s humorous nature even in the more serious situations. That’s not to say he’s a one trick pony as there are some dire situations where he will show a larger range of emotions, but just expect to hear a lot of jokes throughout your ten to fifteen-hour playthrough. 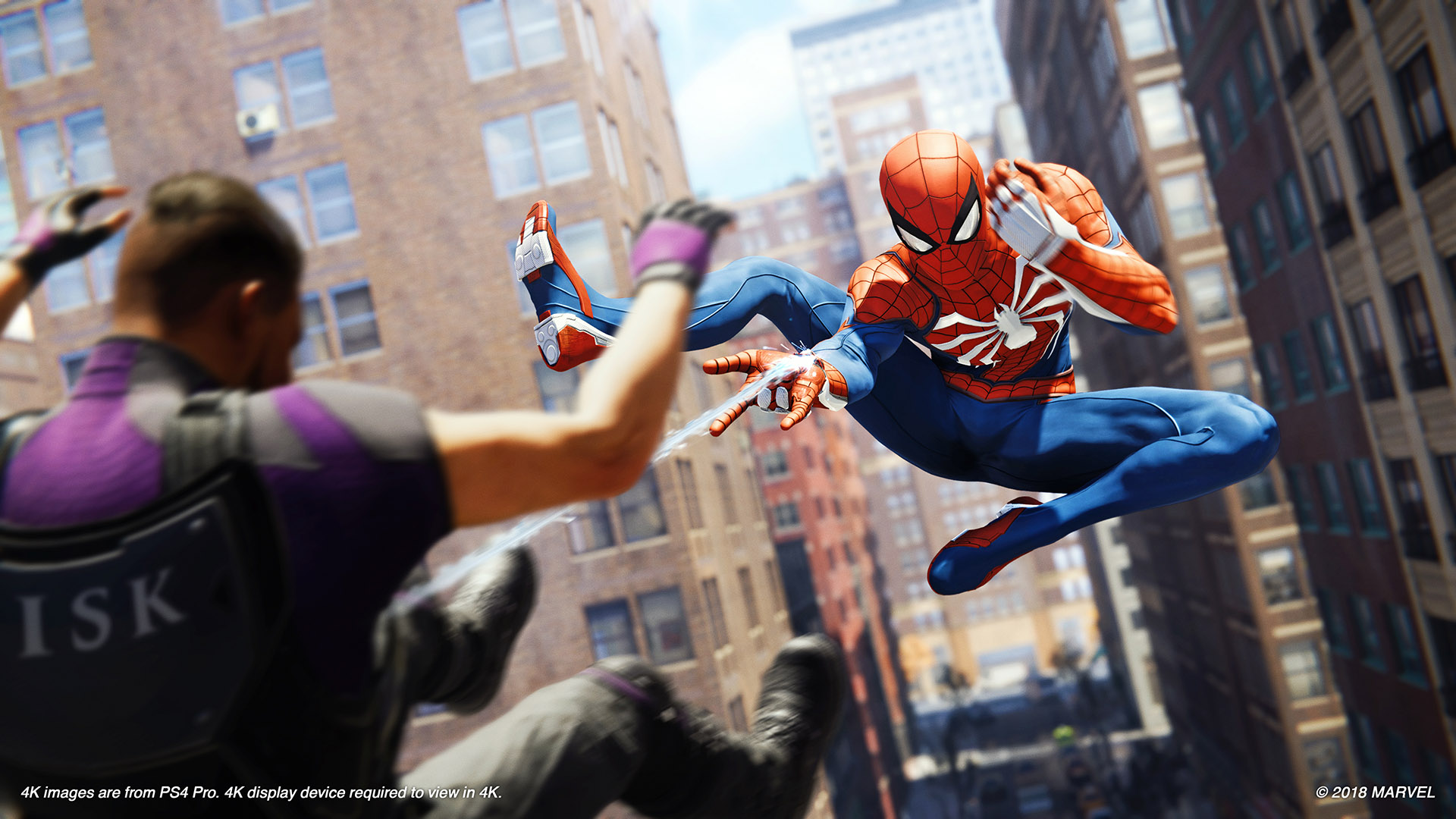 Like the more recent film, this isn’t an origin story for Spider-Man and Peter Parker, as the Webhead has been fighting crime for at least eight years up until this point. For the most part, this is a very enclosed tale, with the core cast of antagonists being made up of classical villains such as Scorpion, Rhino, The Vulture, and more. I believe you can find one character who’s more affiliated with other Marvel properties, but he’s part of a line of extracurricular activities. They even put Martin Li, AKA Mister Negative, at the forefront of the plot, which is a fantastic choice considering he’s a less known villain in the universe. The story itself isn’t going to win any awards, but it does what it sets out to do: create engaging scenarios for the comic book superhero to dish out his wit. There’s a strong theme of revenge that unfortunately I wish was unpacked a bit more, as the main attraction and focus is the outlandish set pieces. The weaving of Miles Morales into the story is also done, for the most part, wonderfully, even though it starts to become heavy-handed and a little forced in the later parts of the campaign. Overall, this is what you’d want for a comic book video game, even teasing the future of the franchise at the end.

If there’s one game you can compare Spider-Man to it’s Batman: Arkham City, and almost to a surprising degree. Whether it’s traversal, combat or stealth, you’ll be instantly reminded of Rocksteady’s vigilante series, although Marvel’s Spider-Man does differentiate itself. In terms of combat, this would be classified as an action adventure brawler where our favorite superhero must fend for himself against an overwhelming numbers of bad guys by timing their attacks and webbing them up for the police to take away. There’s even numerous gadgets that can be unlocked that will generally trap enemies in place or distract them long enough for you to put the beat down on them. Flying across the screen makes far more sense when Spider-Man does it as he literally needs to fling himself towards his opponent with his webshooters. The combat mechanics, while a little simplistic, are overly satisfying as getting into the flow of things can lead to serene moments, especially when you get into more complex combos. With that said, it can be a bit finicky, as we’ve run into scenarios where the enemy is clearly in view but the webslings can’t find them. Targeting can also sometimes be a pain when there are more than a couple of bodies on screen, and the striking distance can be put into question at times. This isn’t to mention that enemy AI isn’t exactly the brightest, as those with rocket launchers can be the worst, sometimes firing only a couple of feet away, giving you no time to dodge and blasting them back in the process. 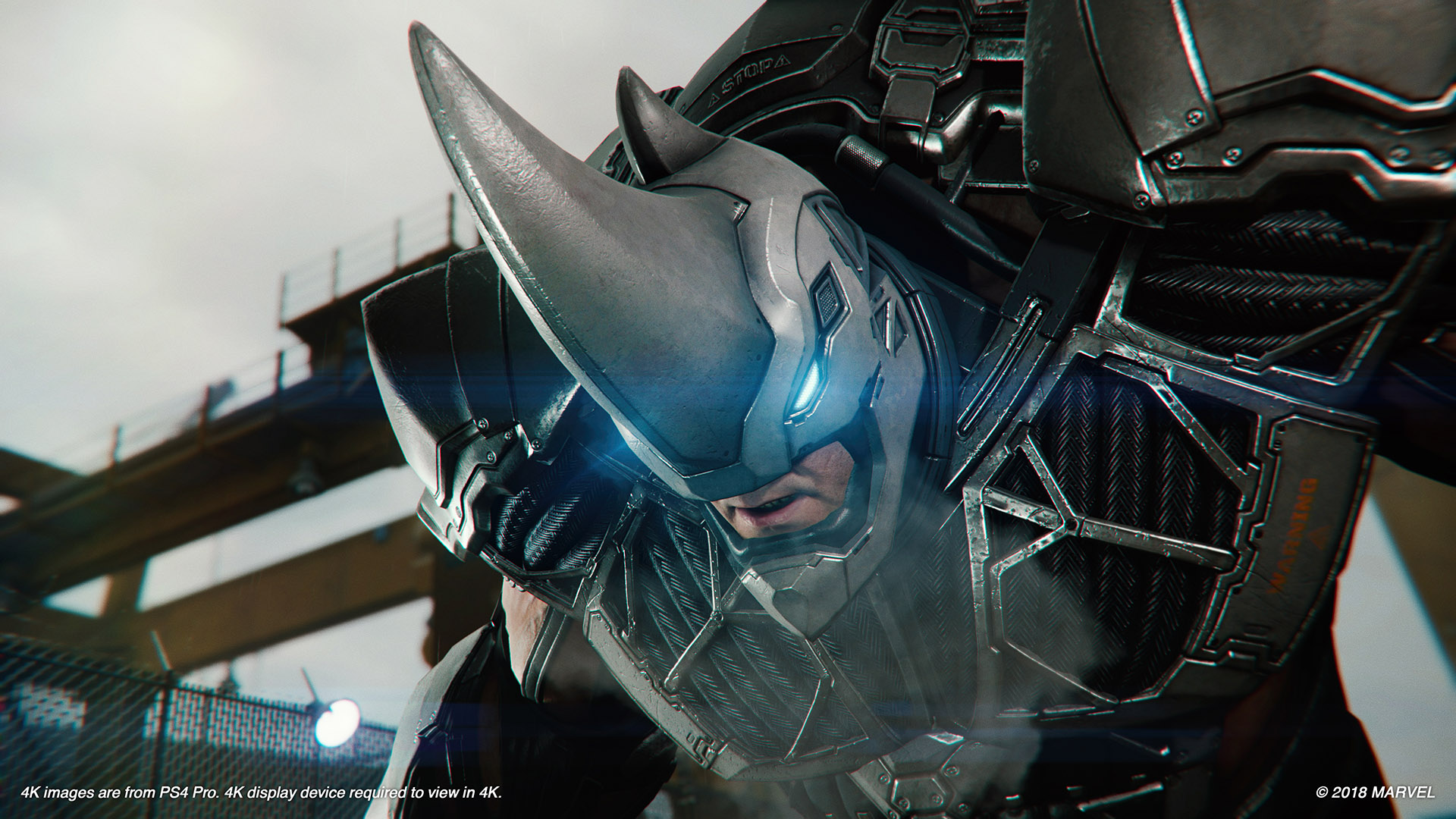 Outside of combat, we’re also treated to a colossal city to explore. It’s not too unusual to see an open world setting in a Spider-Man game, but it’s the way Insomniac Games does it that makes it special. The developers have lovingly crafted Manhattan, with of course the Marvel influences spread throughout. This means you can find memorable locations, from the more obvious Avengers tower, to smaller buildings such as the law office of Nelson and Murdock. While this is a contained story with only mentions of characters outside of the core Spider-Man fiction, there are little details hidden throughout the city that show the developer’s dedication to the lore and will no doubt please longtime fans. The way you traverse Manhattan is of course by using your seemingly infinite supply of webshooters, and boy is it gratifying. There is no game that better captures the enjoyment of running across rooftops, climbing up buildings and swinging across a 6×2 km world than Marvel’s Spider-Man. It’s almost reminiscent of Radical Entertainment’s Prototype, but in a significantly more positive manner, as both games share similar speedy traversal mechanics, among other things.

Manhattan is also brimming with life thanks to the various side activities you can partake in. There’s a lot to do outside of the main storyline, from more action heavy conflicts such as taking down armed gunman and capturing bases, to testing your swinging abilities by catching pigeons and tailing drones. There are even a handful of story-driven side quests, although I do wish there were more dedicated to villains. Most of these are lackluster and surprisingly short, outside of one that involves taking down a mobster/biker with superhuman strength. There’s a lot of opportunity to expand upon Insomniac Games’ Spider-Man universe, but instead we’re left with only a brief glimpse. At the very least most of the side tasks are tied in with franchise familiars, even though they barely show their face, or don’t appear directly at all, only leaving you audio logs to listen to. In the end, the side activities are a fun distraction while swinging your way to the next story marker, but don’t feel fully realized. 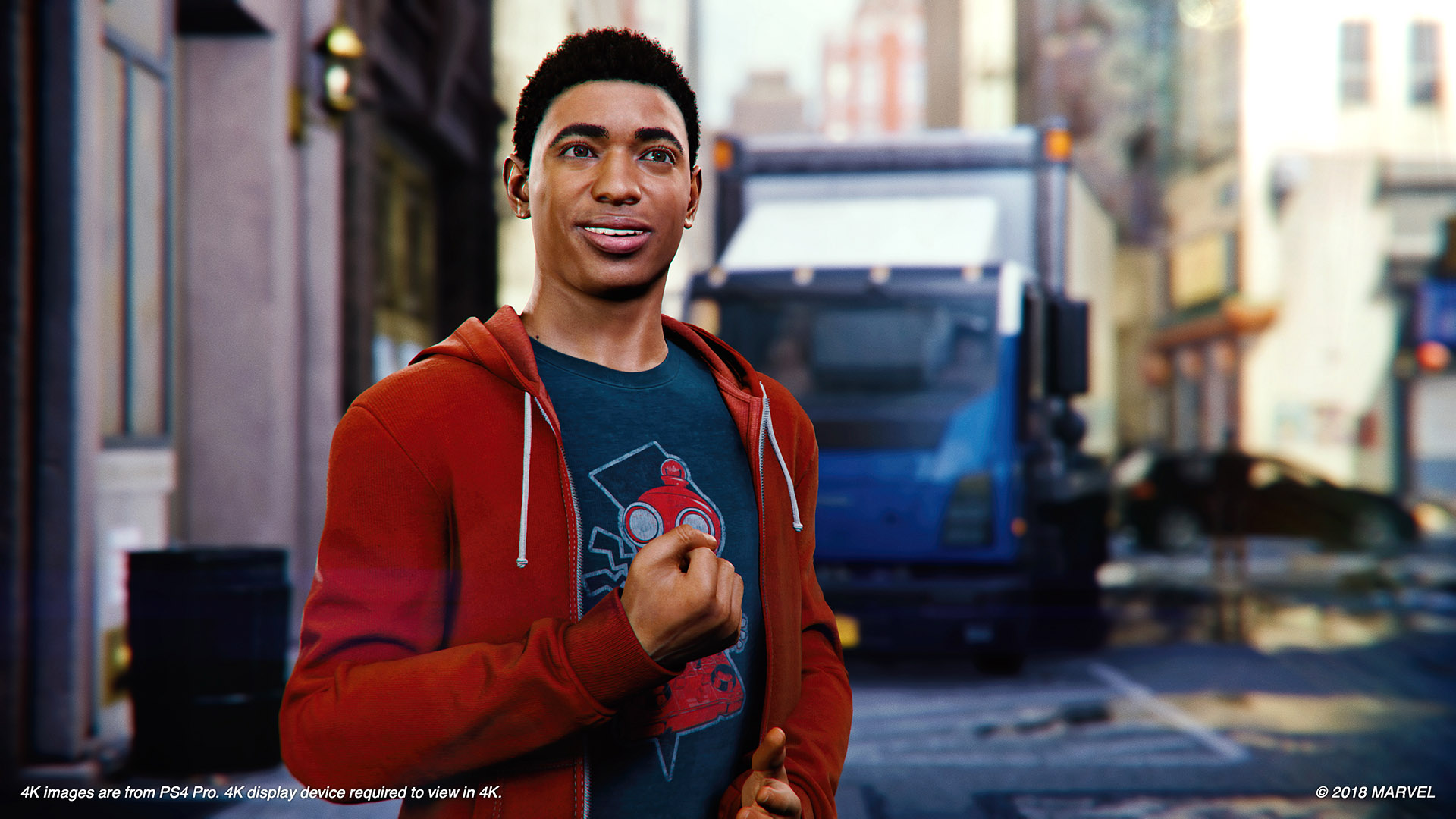 Speaking of the open world, it’s hard to not mention the visuals. This is not only the most remarkable graphical feat for Insomniac, but it’s the best looking Spider-Man game to boot. I suppose that’s not too difficult to accomplish considering the last major Spider-Man game was from Activision four years ago, but the developers clearly took advantage of Sony’s platform to create one of the most visually-immersive experiences yet. The lighting, especially during the evening timeframe, is gorgeous, filling New York with a glow like you’ve never seen it before in video game form. Character models are also detailed and it helps when you have a huge array of Spider costumes to choose from. Having a more “comic” version of Spider-Man in cutscenes always puts a smile on my face. It doesn’t hurt that there are a few cinematic scenarios established throughout the campaign, from racing across the city to take down Shocker, to battling two flying menaces in a hectic storm of lightning and chaos. You’ll never be bored with what’s on screen.

Now with that said, this doesn’t mean Marvel’s Spider-Man is completely spotless as it is an open world game. Thankfully, most of the graphical issues won’t detract from the overall enjoyment and will most likely make you laugh at the absurdity of what’s going on. For example, we’ve had geometry not animating correctly, such as fan blades on the top of buildings spinning on the completely wrong axis, enemies running (or teleporting) for dear life across the map, and our personal favorite, when traffic breaks. I know New York City traffic can be chaotic, but we had a lane open up on the sidewalk, sending vehicles through other cars, pedestrians and buildings. Again, none of these were game breaking or took away from our time with the game, so thankfully they actually added to the comical nature of Spider-Man. 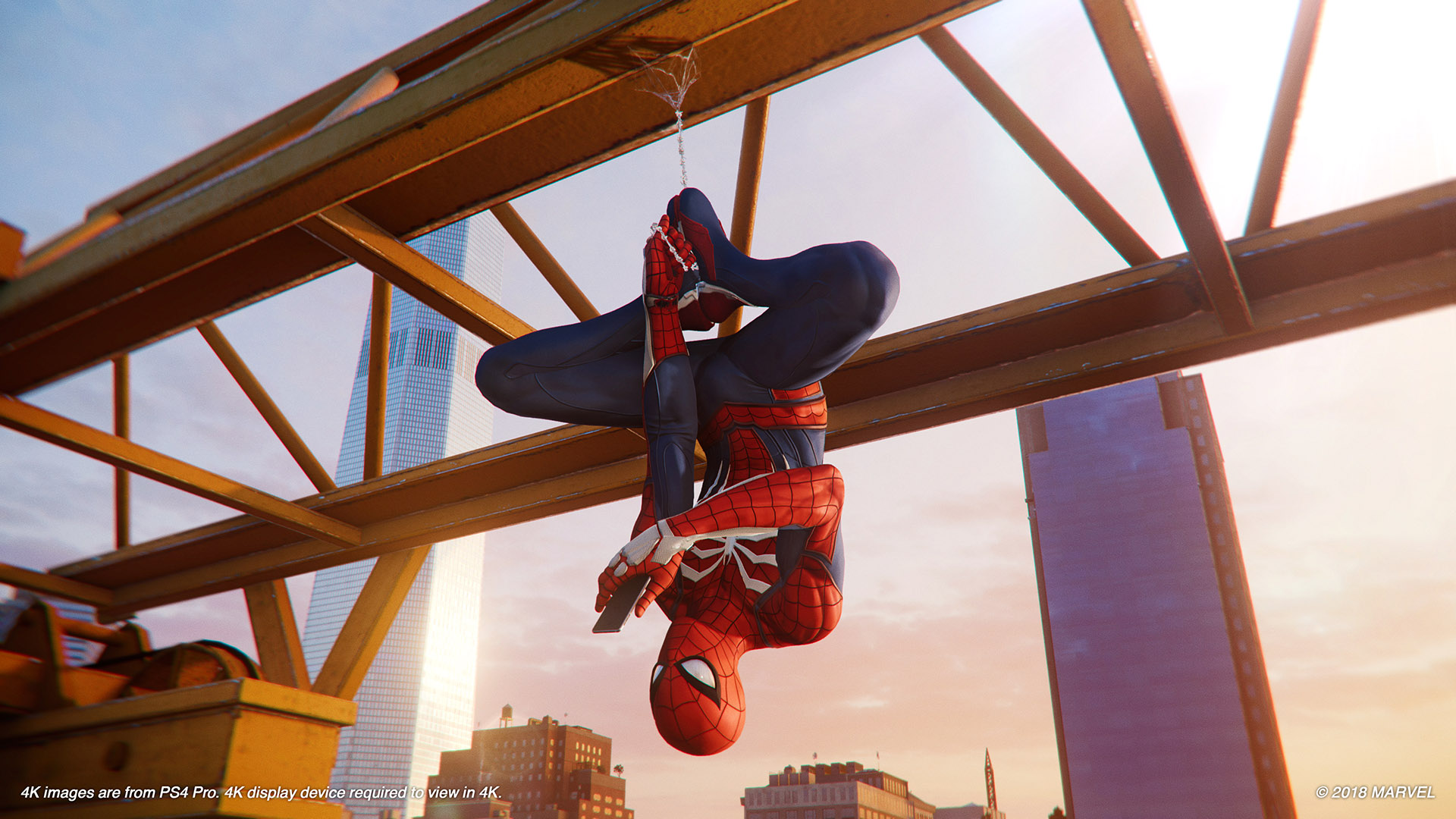 Insomniac Games has created the single greatest Spider-Man game and one of the best based on a comic book. It has a beautifully-rendered world, an addicting combat system and a compelling story that, while won’t win any awards, provides cinematic and highly-absurd scenarios. Swinging across Marvel’s version of Manhattan not only looks good thanks to the beautiful lighting and attention to detail, but it has never felt so good either, being a relaxing and peaceful experience. Unfortunately, nothing is without its faults, as controls can be a bit finicky, and like all open world games, you’ll find occasional graphical anomalies. That’s not mention the side quests are a little lacking. This seems like a perfect fit to tell stories of lesser known or lower profile Spider-Man villains, but among the various side quests in the campaign, there’s only one that fits the bill. Regardless, Insomniac Games perfectly captures Peter Parker’s comical bravado, all while establishing a world ripe for its own unique expansion. In the end, Marvel’s Spider-Man is the most realized Spider-Man game yet.