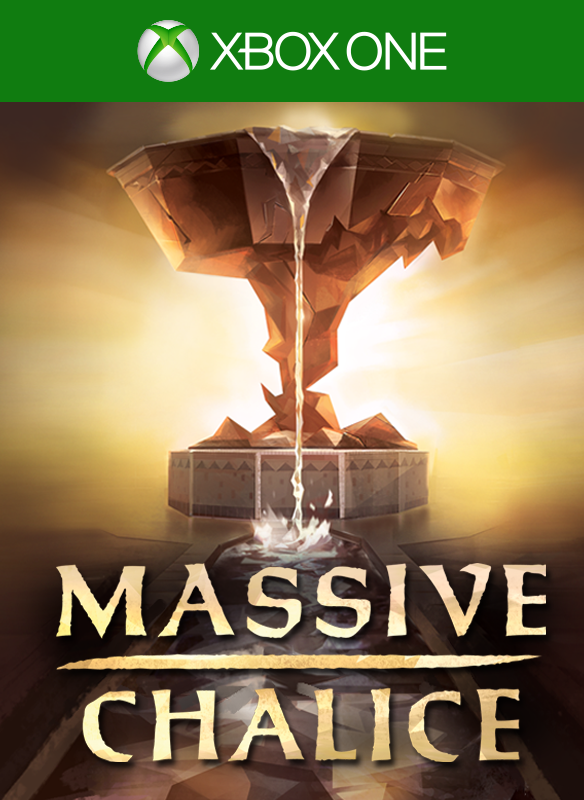 Much like ice cream sundaes, the Atlanta Hawks and those mildly addictive Chicken Soup story collections, in Massive Chalice, the whole is greater than the sum of its parts. Every now and again a title will come along whose best traits are difficult to explain in a vacuum, where critical analysis often does it a disservice. Massive Chalice is a deep game, but it isn’t even the deepest turn-based tactics game to come out this year. It’s combat is strategic and exciting, but it isn’t superb enough to rope in those who despise games of its ilk. Double Fine made a visually appealing title, but it isn’t necessarily anything to write home about from an aesthetic point of view. Still, even though it can’t be without its fair share of criticism, Massive Chalice is a fun, addictive title that finds a way to eat up hours and hours of time in what seems like the blink of an eye, and that’s really what’s most important here.

In a nutshell, Massive Chalice is XCOM-lite meets a genetics simulator with a sprinkling of Don’t Starve‘s vibe on top for good measure. Players are tasked with running a kingdom for three-hundred years while the titular, godlike chalice charges up an attack that will repel an ambiguous central foe known as the Cadence. Obviously no normal humans could last for three hundred years, so in order to maintain a strong domain and fight off the Cadence, players will have to breed new heroes in an efficient manner. That’s right reader: you get to play around with your very own virtual forced marriages. By building keeps, appointing an official Regent and giving him or her a partner, players are going to be able to populate their hero roster for as long as they can survive. In case you were wondering, same-sex marriages are entirely possible, though having to spend valuable, critical research time on child adoption sadly prevents this exciting inclusion from ever being mechanically ideal. Still, even though the mechanics don’t back up Double Fine’s progressive game-design, some level of praise should still be thrown towards the San Francisco-based developer and publisher. Even though Massive Chalice‘s turn-based combat is exciting enough to keep players engaged, running this civilization from an omniscient perspective is far more intriguing. 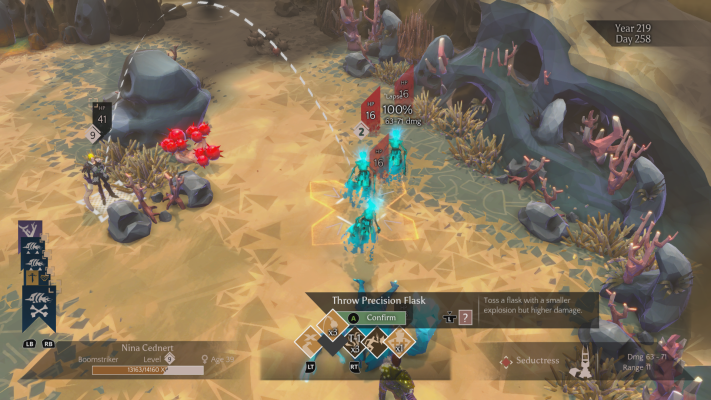 Each character has a specific, pre-defined set of physical and personality-based characteristics that influence them in and out of battle. Everything from fertility potential to health points to movement speed is determined from these traits, and it’s the player’s job to figure out a way to extract the good while eliminating the bad. It’s pretty difficult to defeat higher-level Cadence foes after the two hundred year mark with slow, sickly heroes that aren’t able to protect themselves, so marrying the correct citizens is of utmost importance. The general strategy involves building at least three keeps, appointing at least one Regent from each of the three playable classes (battering ram wielding Caberjacks, ranged archery-focused Hunters, and potion-throwing glass cannon Alchemists), and avoiding throwing anyone with unfavorable traits into the breeding pool. If all goes well, your late-game heroes will be set up for success, but of course that success comes as a result of all of your actions, not just your ability to play matchmaker.

Every action you take in during the kingdom management phase takes a certain amount of time off of your three hundred year chalice-charging countdown. Whether you’re building new keeps, researching new armor or weapons, searching for new heroes or constructing buildings to reduce your research time or add character XP, you’re going to need to wait for a certain amount of time. What makes this waiting period equal parts anxiety-producing and fascinating is that you can only work on one of these research projects at a time; there’s little to no way to succeed if you dedicate all of your time to one endeavor, meaning that forethought and strategy are always important. Think about it: if you spend all your time building new structures, how are your heroes going to handle high-level enemy attacks? Without proper strategy or high-level thought, campaigns will fail over and over again, leaving you wondering whether or not the Cadence can ever be dispatched. 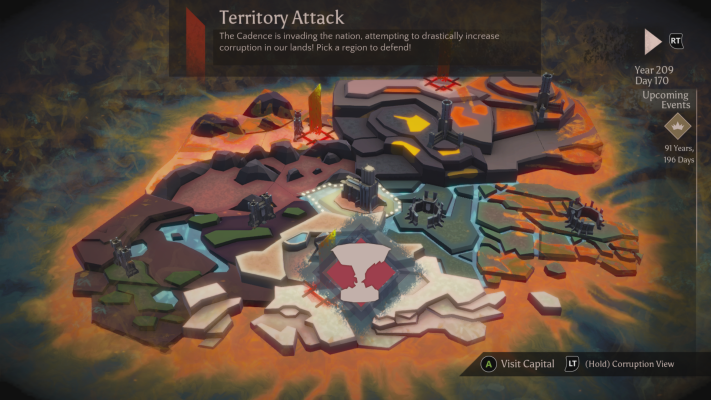 After roughly ten to fifteen years, the Cadence mounts up for another attack on your lovely kingdom, meaning that all of that battle-preparation you’ve been doing finally gets to translate into true action. Being that everything in Massive Chalice is strategy-heavy, there’s a pretty major twist on each fight. The Cadence generally attacks two specific regions of the map, so players have to decide which region they will let slip closer to corruption and which they’ll attempt to liberate. Every time the Cadence wins a battle, be it through the player being unable to fight in a second region, by skipping a fight or simply by losing, a region receives a notch against its existence, with three losses eliminating the entire area and everything inside of it. The constant mental debates that come from wondering whether fighting an easy battle against simplistic foes earns a more valuable reward than a harder battle in a more contested region. The smartest players find a way to avoid unwinnable fights and slowly prevent the most important areas from falling victim to the Cadence’s corruption.

The fact that over eight-hundred words have been spent describing Massive Chalice before detailing the intricacies of combat speaks how wonderful the kingdom-simulation aspects are. This isn’t to say that there’s anything inherently wrong or bad with its turn-based battles (while they’re somewhat repetitive, they’re always entertaining), but rather that the actual fighting is perhaps the least interesting aspect of this incredibly interesting title. 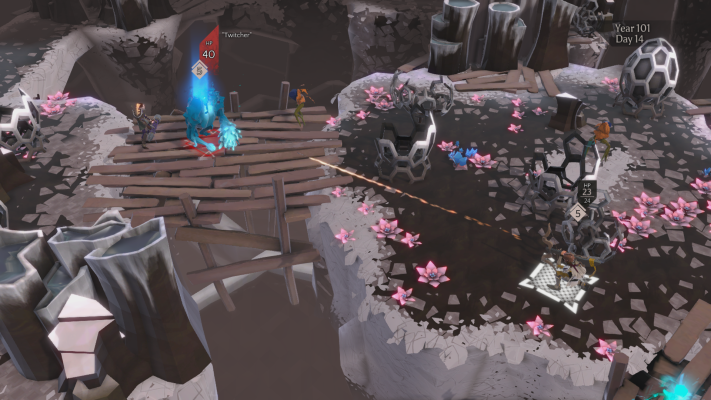 Before each battle, players assemble a Vanguard of five of their heroes in order to defend the region of their choosing. Though every Massive Chalice campaign is different, there’s still a general line of thinking that players should follow in each situation. It’s always better to have at least one character of each class in a fight, as even though Hunters and Alchemists can attack from afar, there’s always some benefit in having spongey Caberjacks soaking up damage on the front lines. The name of the game is always to seek out and destroy all of the Cadence Pawns in the area. These foes can take a number of intriguing forms, all of which have a certain twist that must be attended to at all times. Ruptures will explode upon dying or at the start of a turn after spotting the Vanguard, causing a massive corrosive patch to remain on the playing field at all times. Cradles have the potential to unleash explosive blasts that deal massive damage when they connect with heroes or spawn life-sapping Seeds when they miss. There are even more enemy types that’ll cause players headaches but the most interesting foes are Wrinklers, which increase a hero’s age whenever it lands an attack (this, obviously, can lead to death from old age). Massive Chalice may not have a massive amount of enemy variety, but the members of the Cadence that are present are all interesting enough to make battles engaging.

Being able to fight off enemies involves balancing ranged and melee attacks with careful positioning and detailed forethought. Every turn grants each hero two action points, with movement inside a yellow area costing one point, attacks costing one point, and movement past the yellow area costing two points. Finding a way to do more with these attack points is the simplest way to achieve victory, as wasted turns could quickly add up and cause absolute chaos at the end of the battle. There are a number of shortcomings that cause fights to drag on, namely the fact that the Xbox One seems to lack a dedicated select all function and the fact that enemy attack animations can’t be sped up. The latter of these faults is the most damning, as encounters with ten or more foes feel like they take way too long to complete. While Massive Chalice‘s battle system is good enough to not bog down its better aspects, it isn’t polished enough to cause Double Fine’s latest title to utterly amaze. 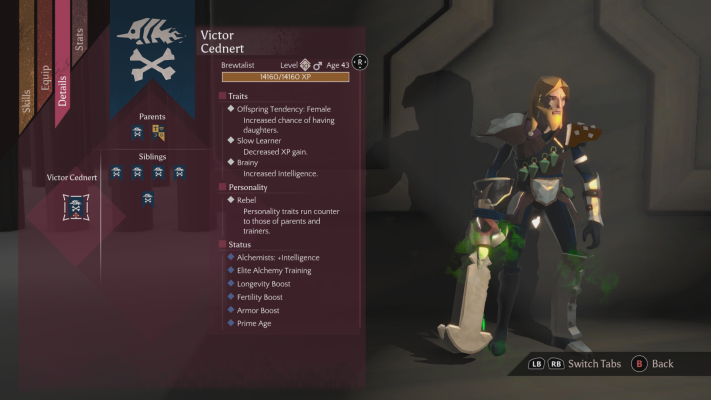 Massive Chalice is the best turn-based strategy title of 2015 so far, and its unique simulation aspects make it especially intriguing. This isn’t going to be thought of as a title that can contend with XCOM on the back of its combat alone, but managing each hero’s genetic traits adds another level of depth to an already deep genre. One of the most challenging titles to come out in quite some time, Massive Chalice will cause players to fail over and over before they taste the sweetness that is victory, but every shortcoming eventually leads to an important lesson. The culmination of these small lessons is what makes Double Fine’s latest game to be addicting, consuming and utterly enjoyable. After all, that last quality is one of the most important characteristics of good game design; pick all the nits you want, Massive Chalice is incredibly engaging and that’s truly what matters.