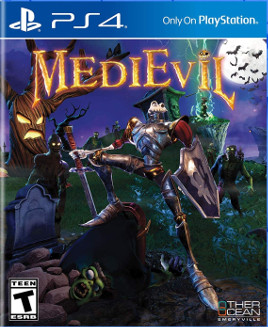 MediEvil was originally released in 1998 on PlayStation. This title stood out on display racks at stores thanks to the art direction that was heavily inspired by Tim Burton’s film The Nightmare Before Christmas and was generally well received due to the enjoyable gameplay. The game’s protagonist is the fallen knight Sir Daniel Fortesque and much like our hero this game is getting a second chance at life, being resurrected just a couple days after its 21st birthday. The question at hand is whether MediEvil’s second coming is something that should be embraced or should Sir Forteseque remained buried, rotting beneath the soil in Gallowmere?

Sir Daniel Fortesque was a great knight, a hero’s hero worthy of celebration who completed deeds of epic manliness. Legends speak of his heroic slaying of Zarok, the evil sorcerer who threatened all of Gallowmere. While his courage and valor was unmatched, he couldn’t withstand the grievous wounds he sustained in the conflict with Zarok. The stories of the hero’s legendary deeds are passed down generation after generation. Like most legends, there may be some embellishment and creative liberties taken with the truth, which is only slightly different. Some lucky or unlucky (depending on which army) shot had an arrow pierce his eye while was marching into battle, killing Sir Daniel before he ever got to do any deeds, great or otherwise. As is the case with most royal blunders, the king opted to hide this disgraceful deed by concocting this great legendary Hero of Gallowmere persona, lest he face mockery from peasants. The rumors of Zarok’s death are also greatly exaggerated, as he went into hiding.

One hundred years pass and Zarok has reappeared. He decided to cast a cast to plunge Gallowmere into eternal night and awaken the undead. To prove that blundering owes no allegiance to any set of morality this spell inadvertently resurrects the Hero of Gallowmere. Despite being reduced to a skeleton with his one good eye mysteriously not decayed, Daniel decides to leave his crypt and beat Zarok to become a hero for real. The ambitious goal of becoming a legendary hero is tough for even the most able-bodied warrior, and being a skeletal corpse puts Sir Daniel at a disadvantage. But his failure was so bad in the first go round against Zarok that the bar is set so low that just wandering out of his crypt is a step in the right direction. 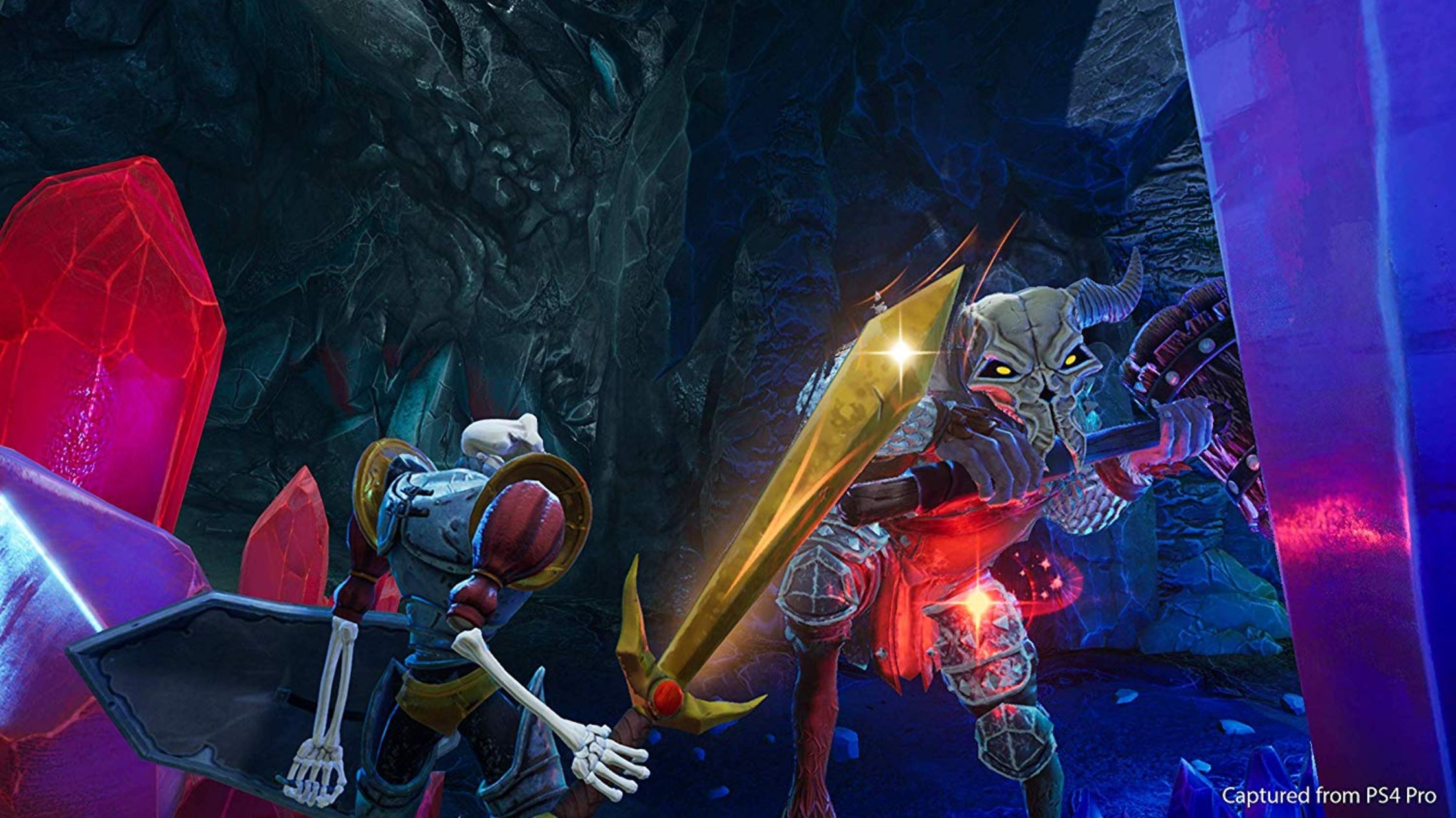 Even at the time of its original release MediEvil had some points of criticism rightfully attributed to it. 3D action games were still relatively new and the mechanics were far from as streamlined as they are now, but even with that acknowledgement there were other games from that year and even earlier than controlled better. The biggest points of contention with MediEvil are controls that can be best described with the word janky, but since that isn’t an actual word sloppy and loose and are also applicable. The second, and probably worse, offender in MediEvil is the camera. Most of the time things are okay, but there are some sections where the player is not being unreasonable in suspecting that the camera has a personal vendetta against them, their family and everything they stand for. During the review I’d say about half of my deaths were honorable, meaning I died because of my own lack of skill at the game or playing like an idiot where the other half would rightfully be blamed on camera and controls. This is an area of the game that should have been updated and improved, but purists who want HD remasters to feel exactly as they did back in the day will have nothing to complain about here.

Despite that little rant there about some technical gripes, they are noteworthy complaints but they don’t mar the experience of playing MediEvil to any significant extent. Having to start a level over because of death due to a misjudged jump can frustrating but the levels aren’t that big so the ennui of trying again is relatively minimal. Part of the charm of MediEvil comes from the writing, art design and atmosphere. Describing the game as having an overall feel of being the illegitimate love child of The Nightmare Before Christmas and Monty Python and the Holy Grail isn’t entirely inaccurate. 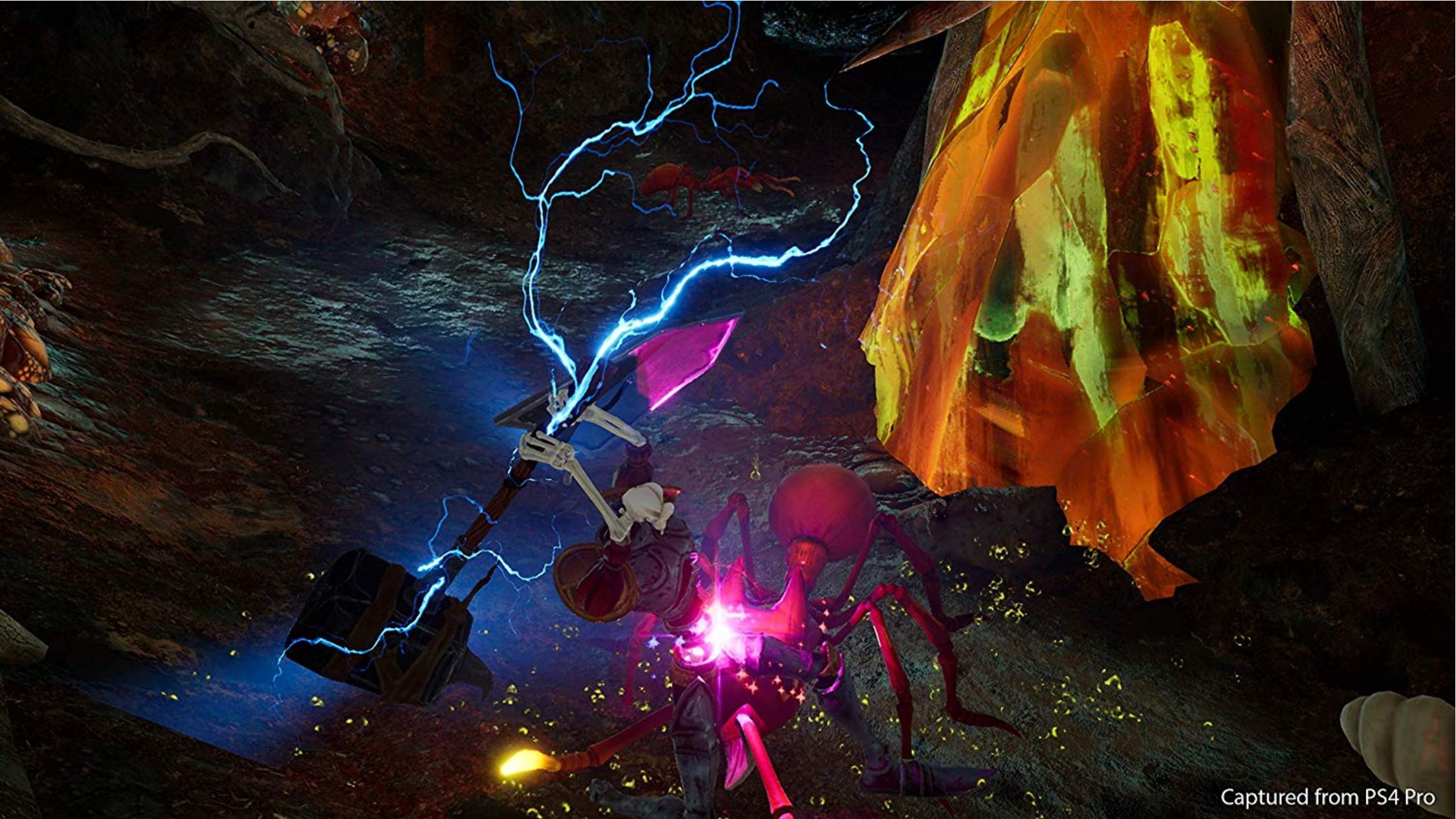 The levels of MediEvil all involve Sir Daniel fighting Zarok’s undead army, and complaints of jankiness aside this is a fun game. While the controls might not be spot on watching Daniel run around battling the dead impaired corpses has a certain comical quality as his fleshless limbs flail about with whatever weapon he has equipped, and all the zombies say he’s pretty spry for a dead guy. The levels are primarily driven by the need to deanimate the reanimated corpses but there’s a mix of some platforming, puzzle solving and hunting for secret areas. Some levels have interestingly designed boss battles that require some strategy beyond charging at it and beating it with a club. It’s usually more along the lines of running around and shooting it while trying not to die. If Daniel is able to fill the Chalice in each level he can go to the Hall of Heroes to collect a reward and engage in a brief conversation with historical warriors who have actually unearned a place in the Hall, unlike our jawless protagonist who’s legend is built on nothing but a web of lies.

The main adjustments to MediEvil is a visual makeover, bringing the iconic art to life in modern 4K so everything looks how we remember it except great instead of how bad late ’90s 3D games would really look if played on an HD TV. The gameplay is exactly as we remember it which retro purists would probably find refreshing but people who are just getting introduced to MediEvil now might not be as forgiving. Despite the aforementioned flaws, MediEvil is a enjoyable title with good pacing. There is enough storytelling to keep the player’s interest but the quick levels allow the player to feel like they’re progressing quickly. Most people should be able to complete the game in under ten hours. 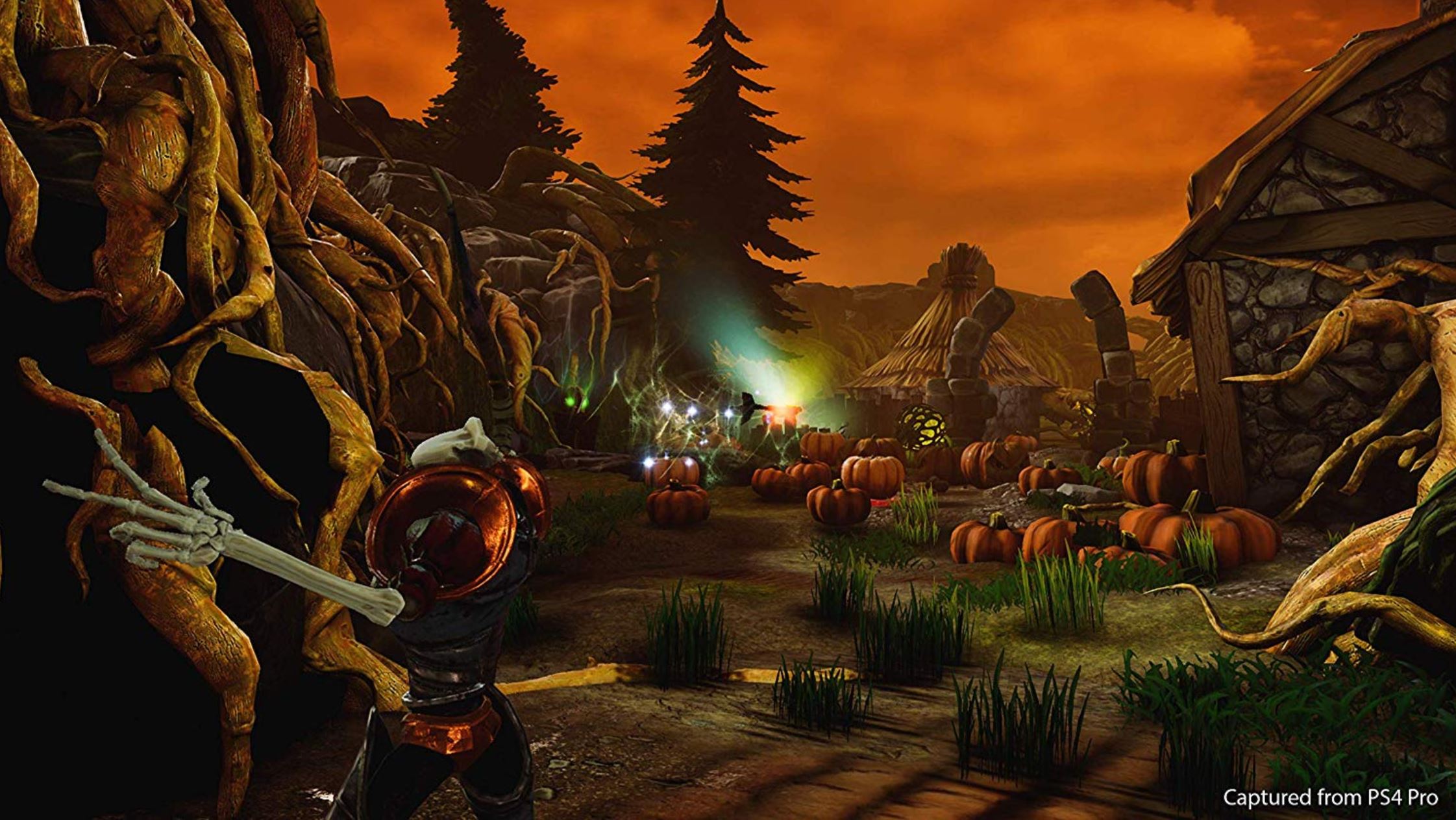 MediEvil is a resurrected game from the past millennium, and like Sir Daniel, some of the legends steeped in nostalgia may have depicted MediEvil as something greater than it is. It shows its age in some spots but for the most part it’s enjoyable. People with fond memories of it would probably enjoy this update over the original if for no other reason than the visual facelift. Its style has as much to do with its legacy as the gameplay but this is one of the more memorable titles to grace the original PlayStation. In spite of the areas where this title has not aged well, MediEvil is still fun and darkly charming adventure, and like Sir Daniel this HD remake still shows there’s life left in this corpse.