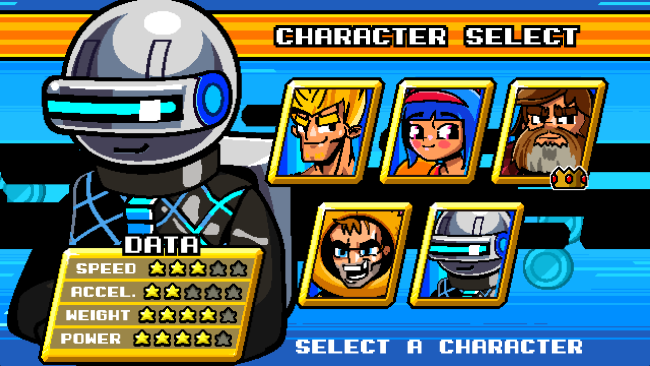 There’s a certain addiction of collecting when it comes to platformers; those shiny gold coins in the original Super Mario Bros. had a powerful allure about them, and you just instinctively wanted to collect all of them even if it meant taking a risky leap of faith. This collect-a-thon aspect of platformers would go on to became a primary hook of Rare developed platformers, and has always remained a staple of the genre in some form. Mega Coin Squad— which comes from Big Pixel Studio and is published by Cartoon Network’s own Adult Swim Games– uses the appeal of hoarding coins as the main gameplay objective, but there is much more taking place around this basic goal. Mega Coin Squad has bits of Super Mario Bros., Sonic the Hedgehog, Dig Dug, Super Smash Bros., and even some lead pumping shooting and rogue-like elements, all tossed into a blender to create something that may seem like a mess at a cursory glance. However, moments into the game you’ll discover a fun arena-style action platformer that has clear direction and substance in midst of all the chaos.

The basic objective in Mega Coin Squad is simple: collect the target number of coins and bank them all into the Piggy Bank in record time. Having that simple and clear gameplay objective is the cornerstone of a fun pick-up-and-play arcade romp, which then makes the introduction of subsequent gameplay mechanics and features less jarring. Mega Coin Squad throws all sorts of crazy things at you; the enemy variety never lets up, there’s plenty of guns to play around with, and best of all the arena-style levels are constantly changing and morphing in real-time to present all kinds of platforms and areas. It’s a bit like Super Smash Bros. in that sense, as you have one main level but the platforms, their designs and even the enemy patterns are constantly being switched around. 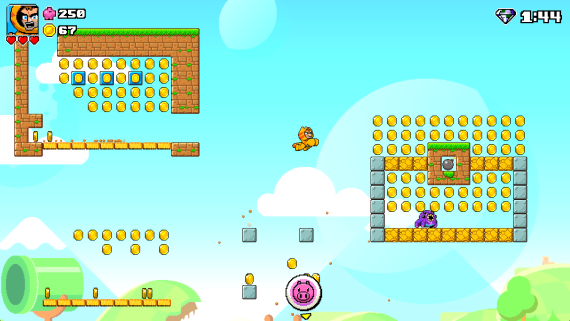 The appeal of the single player is to unlock all kinds of new weapons, skill upgrades, multipliers, and other useful support items (such as the coin magnet), and you get these opportunities of unlocking new gameplay content when you earn diamonds by completing level objectives. These generally involve completing the level within a certain time limit (the action is fast, encouraging an efficient speed-run approach), not losing any lives, and the most challenging of all: banking all the required coins in one single go. The last objective is a tough one, because like Sonic the Hedgehog you drop all coins upon taking a hit from an enemy, and this can be pretty nasty feeling when you see all your loot spill all over the floor with the clock ticking. But you are allowed to make Piggy Bank deposits in nice little installments, which is probably the safest way to do it but definitely not nearly as satisfying or rewarding as getting it done in one go.

There’s a fun cast of characters varying in terms of speed, power and weight. One of them includes a charming looking homeless man dressed in a cat suit, but for starters you want to go with the hunk of lumberjack manhood. The main attack is a dash that lets you ram into enemies and walls for some destructive results. You also have a fireball, which can be occasionally useful, but you definitely want to grab hold of the machine guns, rocket launchers and other explosive goodies that randomly pop up. The action is always fast and frantic — a lot needs to be juggled in a single level– and yet everything feels under control because of the inherent simplicity of the controls, allowing you to get into this rhythm which involves chaining and timing your dashes in cool ways.

Visually, the game is vibrant and detailed for being sprite-based , as the animations have a lot of fluidity and character to them. The game’s aesthetic strongly resembles Scott Pilgrim (the comic and video game) which makes the character designs likeable. The music is upbeat too, complementing the fun party nature of the gameplay. Speaking of party, everything feels genetically engineered for crazy multiplayer mayhem. Unfortunately, online multiplayer is not supported, which is a sad because given the online gaming culture of today, many are probably going to miss out on this mode. Still, there’s nothing wrong with a good old fashioned couch session at all, and if you have enough peripherals and um… real friends lying around, then you’re going to get the most out of Mega Coin Squad. That said, the single player campaign is still very engaging and playable thanks to some satisfying and progressive challenges, encouraging you to play faster and better. 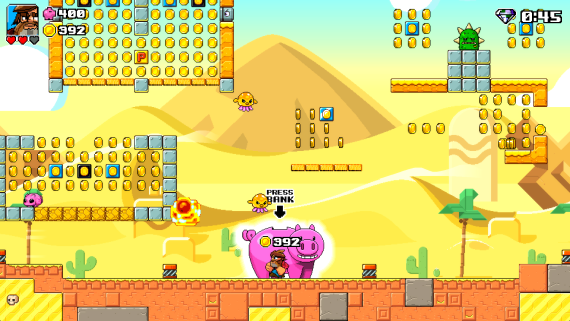 Mega Coin Squad is a fun, frantic and wholly unique action platformer with all sorts of crazy ideas and mechanics built around a clear and engaging objective of collecting and banking as many coins as possible. It dives right into the basic primal gamer instinct of collecting shiny golden coins, and throws in countless obstacles and useful tools to make things interesting. It’s a highly playable arcade style experience, and players with real friends and extra controllers can double, triple and even quadruple the fun.