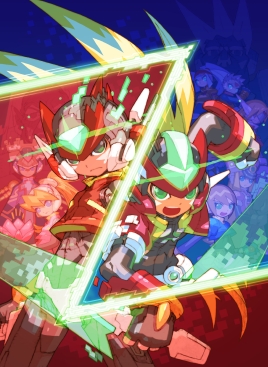 The Mega Man Zero and Mega Man ZX games always seem to have occupied a bit of an odd place in the Blue Bomber’s history. The Classic and X series are remembered easily, but after the X series was finished (well, after the fifth game when it was intended to be finished), the next two incarnations went to handheld consoles. And unfortunately, sometimes even the best handheld games will be ignored in favor of console games. And given that the later games are more story-heavy, it can be hard for new players to dive in. But now with the Mega Man Zero/ZX Legacy Collection, the Zero and ZX games are brought to the forefront. But are they still worth checking out over a decade later?

Taking place a century after the X games, Mega Man Zero finds Zero being revived by Ciel, a human scientist that’s part of a resistance trying to prevent the genocide of innocent Reploids by the heads of the supposedly utopian Neo Arcadia. So now Zero has to protect them, all while trying to recover his memories. And then more than two hundred years later, Mega Man ZX sees more utopian cities emerging in the wake of the Zero series’ events, and an ordinary transporter suddenly finds themselves taking on the role of Zero, joining up with a group called the Guardians in order to protect the lands from rogue Maverick attacks. There is actually a lot more to the story across all of these games, but that would involve spoilers and cause us to be here all day. 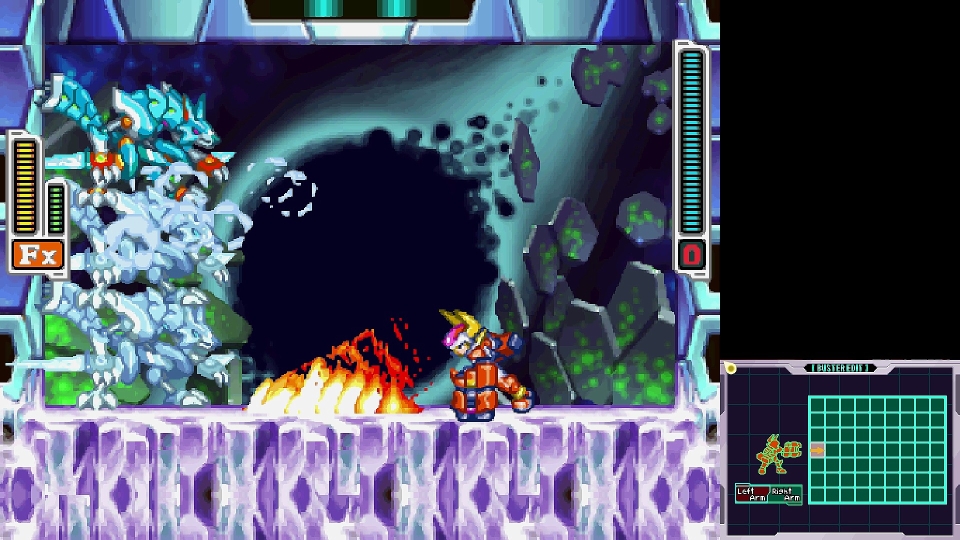 I think it goes without saying that I doubt I need to elaborate much on the basic gameplay mechanics for any of these games, though. Jump, shoot, dash, wall climb, charge shot, saber attack, switch weapons and equip ones with appropriate strengths when needed/given, et cetera. It’s simple, it’s fun and if you’ve ever played a Mega Man X game (or even a regular Mega Man game), you’ll feel right at home. Granted, you may have to get used to some of the controls at first (especially since the two series here have different default layouts), but once you do, you’ll be zipping around in no time. As such, it’s best to simply just go through each game included, one by one, and see what unique flavors each one brings to the table, along with certain features of the collection that enhance them.

So first off is Mega Man Zero, and just shortly into it, the game immediately reminded me why my younger self eventually stopped playing them: these games are hard. Extra lives rarely ever drop and they don’t replenish in between levels. Instead of anything like the familiar E-tanks, you can find Cyber Elves that assist you in several different ways, like replenishing health or stunning enemies. They’re single-use, however, and the ones with the more powerful effects or ones that provide permanent buffs require you to feed them E-Crystals you find, which requires a lot of grinding. Likewise, you need to use weapons over and over to upgrade their strengths as well. And on top of that, using Cyber Elves affects your end-level rank.

In addition, the level design in the first game just feels off. Like there weren’t enough checkpoints, and the smaller playing screen means more cheap hits and leaps of faith. The levels seem to occupy a weird area where they’re too short to feel satisfying, yet long enough that you feel annoyed whenever you die and get kicked back to the start. This may actually be a good time to mention that aside from a Casual mode that can be toggled on and off, the collection allows you to flip on instant save points in the levels when you need, which is a nice touch. 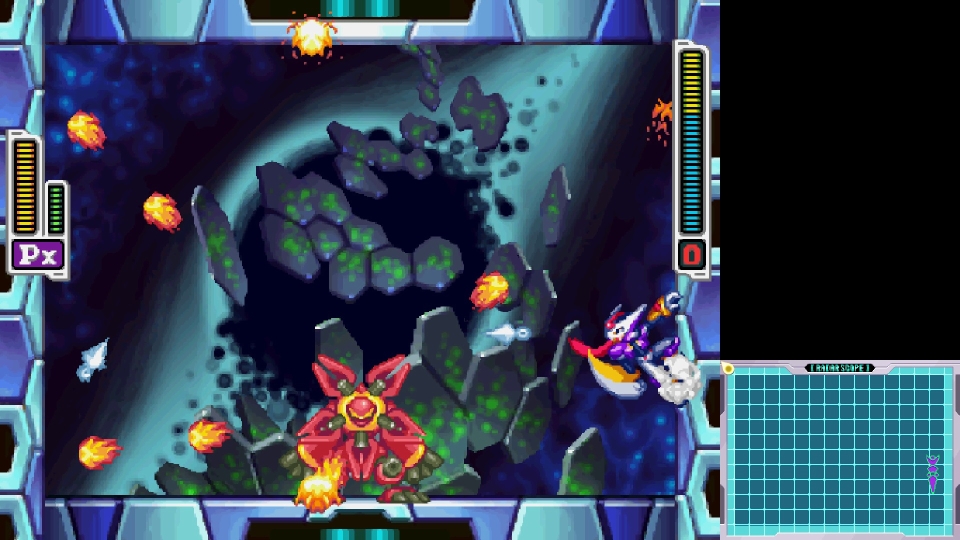 Also impressive is the Resistance Base, which acts as the hub area in between levels. It’s a sprawling underground area which allows you to speak with the Reploids within and it adds a good amount of flavor to the plot. The plot itself is also good, even if the key parts of it take a while to get to. The graphics are incredible, with a distinctive style and crisp, detailed sprites that would carry on throughout the rest of the games. The collection even has filters that either smooth things out or provide a touch of static, just like you’d get on the GBA. Overall, a bit of an awkward start, but an enjoyable one nonetheless.

Mega Man Zero 2, though, is where things start to improve. The story gets a much better presentation, the level design is vastly improved, and even the stage select layout gets a much-needed boost, replacing the plain text and awkward structure of the first game with something more in tune with older Mega Man games (beat four bosses, interlude, another four bosses, finale). There are also EX skills to be gained by defeating bosses with an A rank, different forms to unlocks via various means with their own stats and effects, and a new Chain Rod weapon that allows you to cling to ceilings, swing around and grab objects, all cool additions. So a huge upgrade to the series, without changing anything at its core. Well, except possibly for the bosses, who seem to become much more difficult…

And then we have Mega Man Zero 3, which goes even further and is clearly the high point of the series. The changes this time around are simple, but provide notable boosts, with Satellite Cyber Elves that that can float around you and provide passive effects, Secret Disks to collect that either have character bios, E-crystals, Cyber Elves or even Customization Chips that can help toggle Zero’s stat and optional Cyberspace areas in each level that you can enter with less enemies and more health, at the cost of your rank at the end possibly being reduced. All amazing stuff, and top that off with even more well-developed characters (including the bosses), a great story and even more fun levels, and you have a game that arguably alone makes this all worth the price of admission. 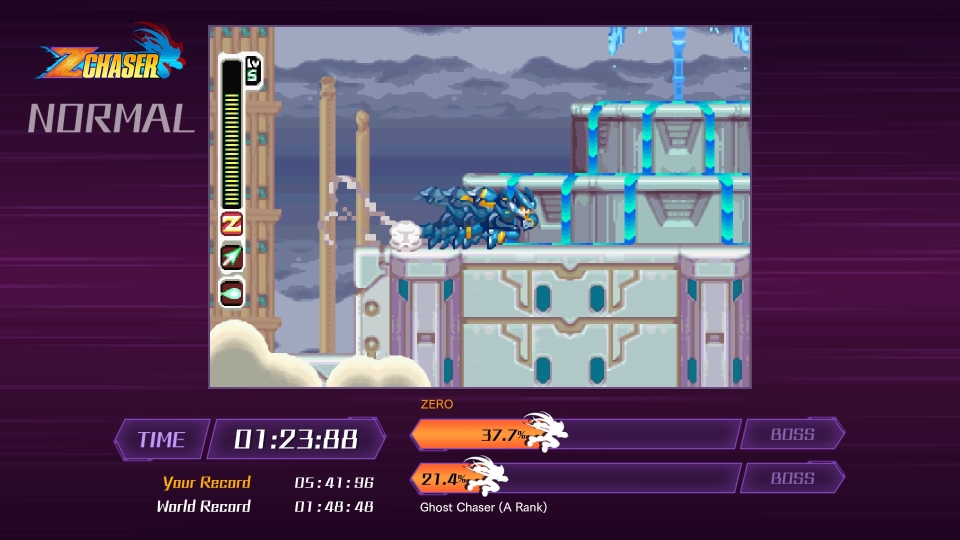 But that’s not all! See, the Mega Man Zero/ZX Legacy Collection actually restores a feature for Zero 3 that Western audiences likely haven’t seen yet: e-Reader Modification Cards! Yeah, remember the Nintendo e-Reader? It was a peripheral for the GBA that allowed you to collect cards which could unlock new levels, mini-games and more. And Mega Man Zero 3 had a set of cards for it, but alas, they were only released in Japan until now. So through playing the games, you can unlock Modification Cards that provide effects which you can turn on and off. As the name suggests, they’re mostly cosmetic, allowing you to do things like decorate the Resistance Base and add more Reploids to it, but some can increase your power a bit. Either, it’s a nifty part of the game’s history that’s welcome.

And now we move on to Mega Man Zero 4, and given that the third game is the high point, you can guess that a drop was coming. Actually, a quick history lesson: The Zero series was originally planned to be a trilogy, but as Capcom wanted one more game to publish and the developers actually still had one major loose end in the plot to tie up, we received a fourth entry. The end result is a game that arguably serves as a terrific grand finale in terms of story, but not so much in terms of gameplay.

The Resistance Base is reduced to a mere four rooms, a mechanic that allows you to select the weather before each stage feels near-pointless, the Cyber Elves are now basically skill trees, and finally, we have crafting elements. They’re additions that just feel forced. It’s still good overall, mind you, but this game is to the Zero series what Mega Man 5 is to the Classic series: A solid, decent entry, but one that still feels creatively bankrupt. 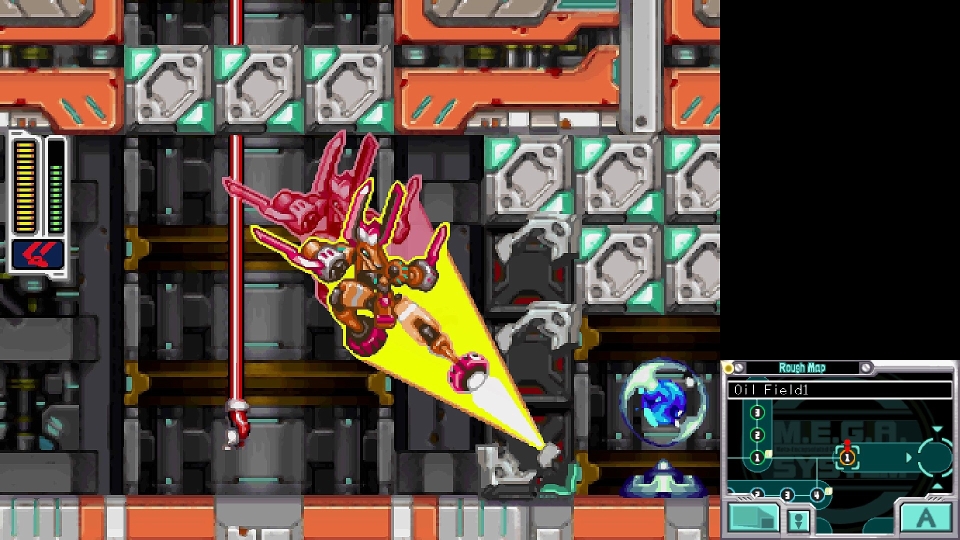 And now, one year and two in-game centuries later, we received Mega Man ZX. The game and series that dared ask the question “What if someone made Mega Man X into a metroidvania game?” And as it turns out, the answer is that it would be good! Choosing from either a male or female character, you wind up in the possession of a Biometal, an artifact that essentially contains the soul of a legendary hero from the Zero games that can provide someone with that hero’s powers. So the game is spent unlocking new Biometals and card keys in order to progress and discover secret areas. Basically the same action you’ve loved so far, except now with classic metroidvania action.

Now that the series is on the DS, the graphics are even better and more colorful than before, including animated cutscenes, with several impressive levels and touches, including areas where you can even switch to your non-powered form. Enemies won’t attack you, and you can even just walk around regular cities, taking everything in. It’s a simple, yet highly effective touch that adds to the game’s world…which makes up for the horrible map system, which actually detracts from the game’s world. Yes, I realize my current mission is in Area F, but it would be nice if the game actually provided hints on how to get to Area F. And you can only take one mission at a time, meaning you can go through one entire area trying to see if it connects to different area, only to find a dead end with a goal that’s not active. Whee.

Finally, we have Mega Man ZX Advent. Quite notably, it starts with a new cast of playable characters, Grey and Ashe, each with different plots. The changes this time around include homing attacks, super attacks that recharge, and most importantly — at least in my eyes — A-Trans forms that allow you to play as a the Pseudoroids (this game’s version of Robot Masters or Mavericks) that you defeat. Ever since the NES days, I have dreamed of a Mega Man game where you can play as the bosses, and now we finally have it (well, this and the Powered Up remake of the first game). We even get voice acting this time as well, though the voice for Biometal Model A could be better. Plus, as these games were made for the DS, that means the second screen is sort of awkwardly wedged in, making the slightly improved map hard to see. There’s also an issue with more linearity this time around, but it’s still a fun romp.

As for extras, we get the usual galleries, music tests and an extra Z Chaser mode that allows you to test your speedrunning skills and face off against the world. It’s all easy to navigate as well. All in all, even if the games have their flaws, it’s one excellent bundle. 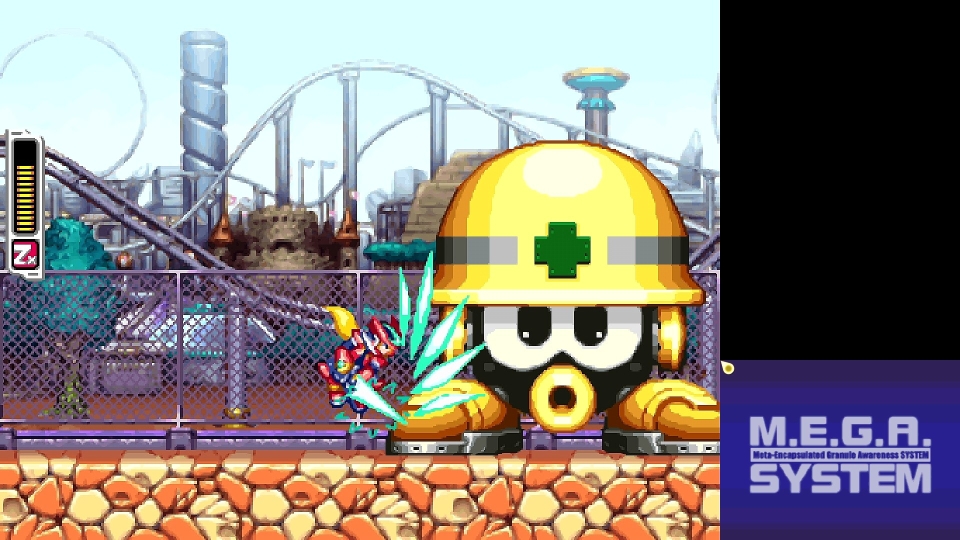 The games included in the Mega Man Zero/ZX Legacy Collection aren’t always perfect, but they’re still a ton of fun to take on thanks to some impressive stories, graphics and a nice level of challenge. Like the previous Legacy Collections for the Classic and X series, it’s something fans will love to rediscover or even discover for the first time and is worth picking up. It’s an odd chapter of Mega Man history, but one worth learning about again.