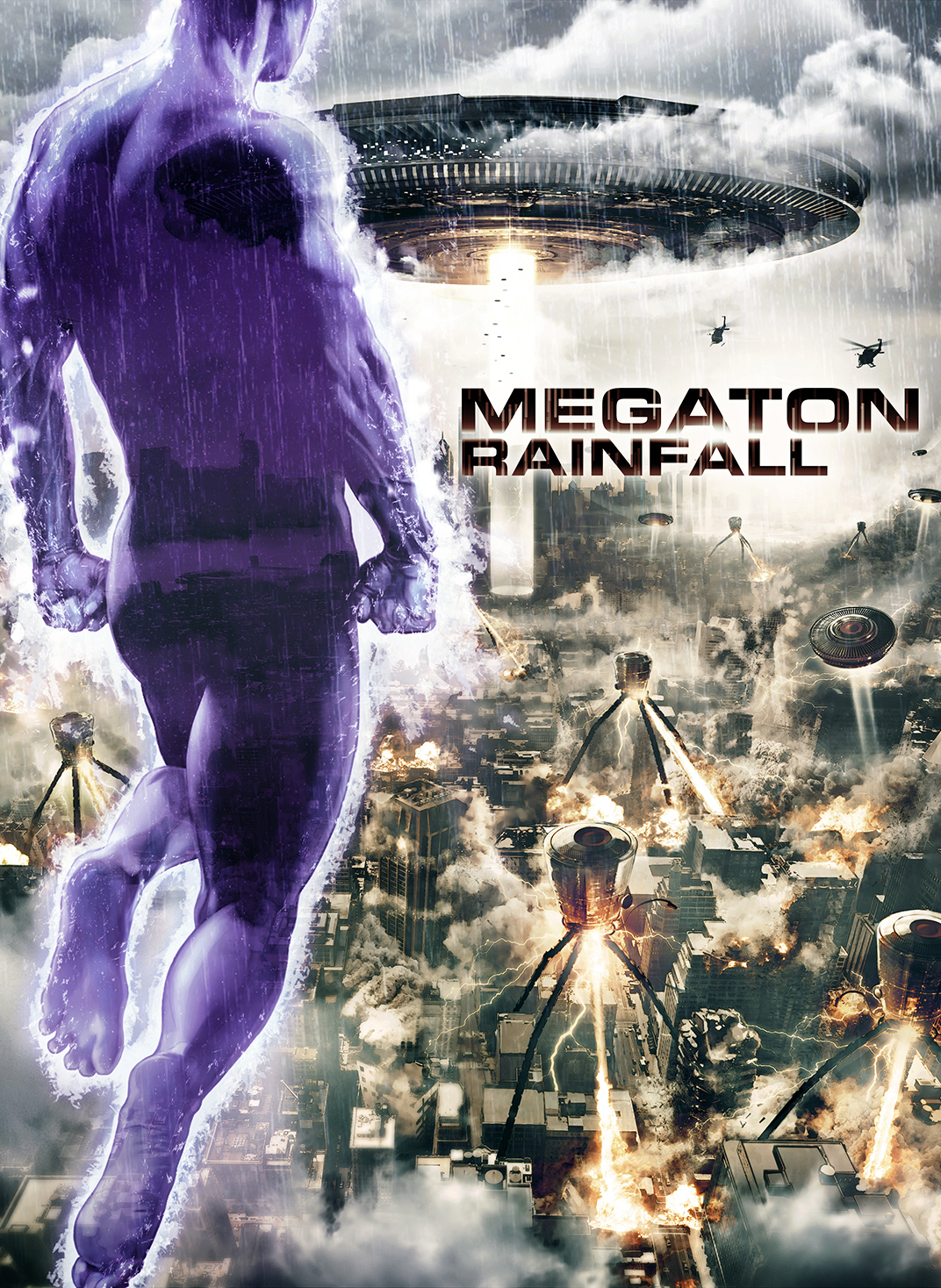 Power is a lovely thing, but there are limits on what’s practical.  Spin a web any size and you’re fine, but unleash a power blast that levels half a city and maybe it’s best to use extreme caution when letting it loose.  The unnamed hero in Megaton Rainfall is overpowered beyond all practical measure, with the result being that the world he’s trying to protect is in just as much danger from his efforts as it is from the attacks of the strange invaders decimating Earth’s cities.  Sure, the eventual result of the invader attacks is the utter destruction of the planet, but up to that point they’ve only got a body-count in the hundreds rather than high thousands that the hero can cause.  Acting heroic is easy; being an actual hero, on the other hand, takes skill, caution and the pinpoint aim of a sniper.  Or you can pass on the hero thing to unleash a charged ultra-blast straight into the heart of a city just to watch the buildings crumble down as a wave of devastation spreads out from the point of impact, so long as you don’t mind restarting from the latest checkpoint.

The hero starts his journey having been created by a voice emanating from a mysterious box, and it sounds remarkably like Elohim from The Talos Principle decided to take a break from puzzles and create a superhero instead.  As the offspring of a box-shaped god you fly around the world doing his bidding, which basically amounts to “destroy the invaders”.  The reward for each successful encounter is a new power, which starts with a purple energy blast and then expands to include time freeze, a charge shot, dash attack, and energy beam.  Even flight gets an upgrade after one mission, allowing you to fly “a trillion times the speed of light”, because why stop at being a little overpowered when you can be ludicrously overpowered instead?

Once you’ve got the preliminaries out of the way, earning flight and the energy blast, it’s time to start defending the Earth from its invaders.  The Earth is a full-sized globe, 197,000,000 square miles, and while not an exact recreation it’s still a huge place to protect.  The planet is covered in cities, most of them procedurally generated but a few having familiar landmarks, and the invaders love showing up to wreak havoc in them.  As a hero you’re invulnerable but the cities aren’t, so each mission’s health bar is measured by the human body count, and it doesn’t really matter if it’s the attacks of the invaders or the defending hero which causes the loss of life.  A missed shot at an invader can easily cause as much damage as their attacks, so you need to be careful.  Not so careful as to take the fun from combat, because checkpoints are spaced generously, but spamming energy bolts isn’t going to help your mission ranking. 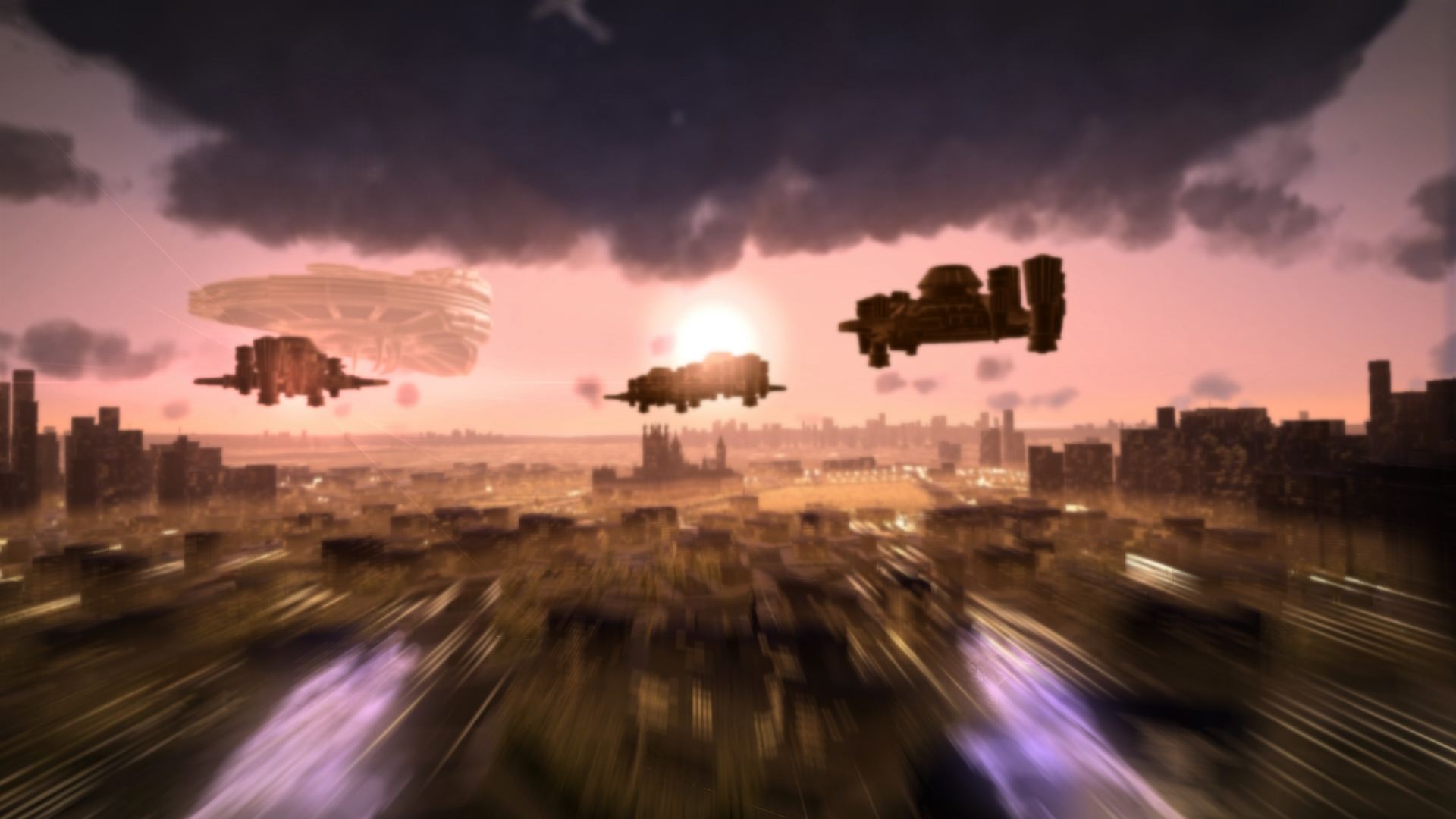 To reinforce the idea of careful target selection each enemy has a red or green spot on it that acts as a weak point, allowing it to be defeated in a single precise shot.  While you can aim at the body and wear it down, it’s much more efficient to target the insta-kill spot and move on to the next invader, but that’s easier said than done.  Red points require an energy blast, and green is susceptible to the dash attack, but the invaders move fast and it can be tricky to line up either type of hit.  The invaders also come in a fantastic variety of robotic forms, from squid-like creatures that tear buildings from the ground, to robo-worms burrowing through skyscrapers, saw blades that cut up one side of a structure and down the other, and massive motherships sending shockwaves that pulse the landscape in ripples and guarantee a checkpoint reset if you let them take the shot.  Megaton Rainfall does nothing small, but if Earth still seems restricting then there’s a whole universe out there to explore.

There’s a reason the hero can travel a trillion times light speed, and that’s because his creator isn’t telling him everything.  There’s more information out there to find between one mission and the next, but with an entire universe to explore it can take some searching.  The hero’s speed is determined by proximity to an object, whether that be a galaxy or a planet, although the scale does tend to fall apart when dealing with interstellar distances.  It’s hard not to see a stellar cluster floating in a dust cloud as only a few feet across rather than being a majestic structure extending millions of light-years through space, especially when the speed the hero moves is so quick it’s basically like walking around a shrub.  The perspective-change as you get closer or farther away can be a bit abrupt, but there’s no question that, when you take a minute to slow down and feel the size of everything, the enormity of the universe becomes a bit overwhelming.  True, it’s mostly waste-space seeing as the stars and planets are barren, but there’s a lot of it extending basically forever, plus some very pretty views if you want to do some intergalactic sight seeing.  Mostly, though, I found myself looking for the telltale glimmer of the next information beacon (out of seven total) and flying straight to it. 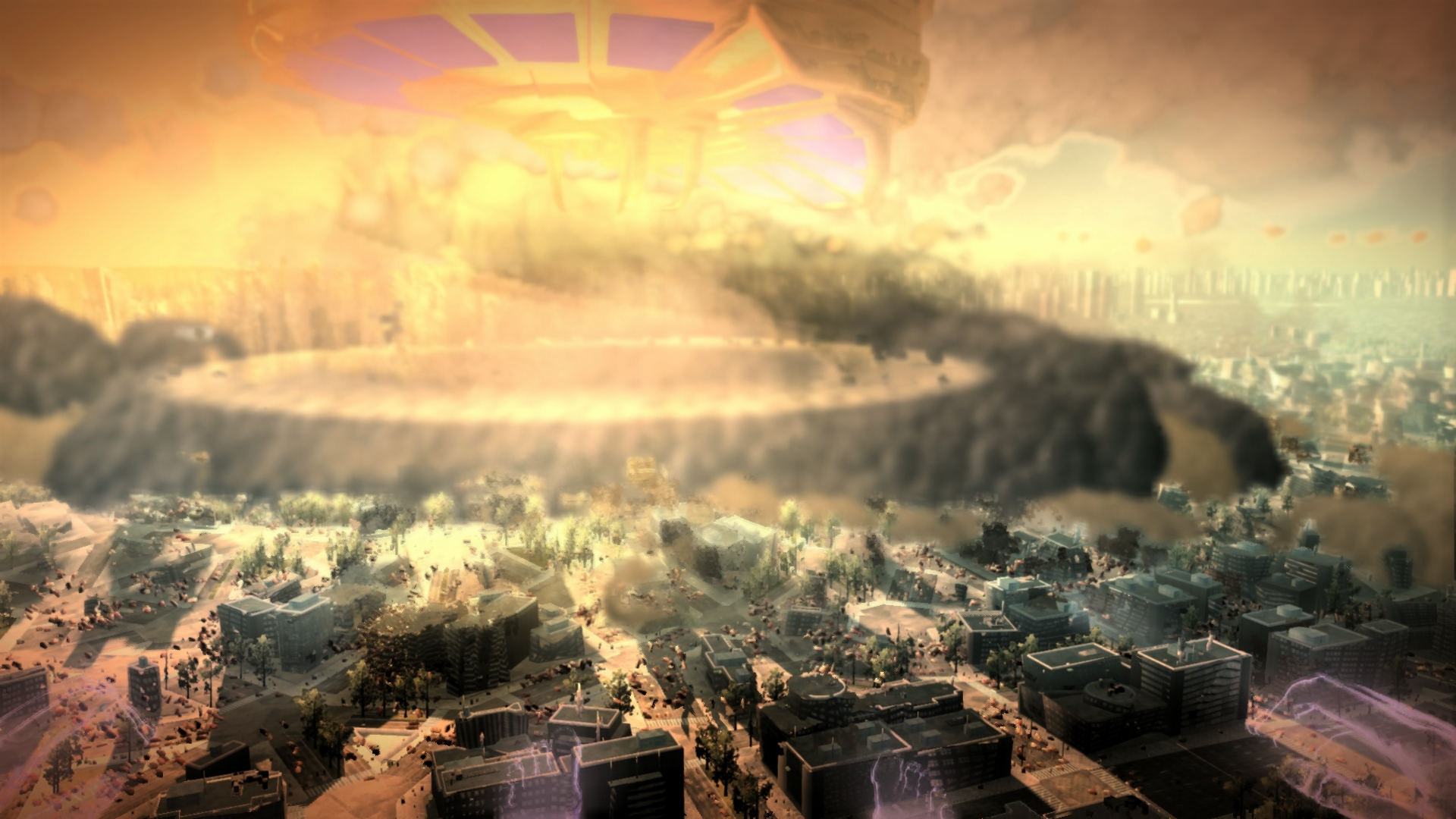 Megaton Rainfall has aspirations as big as its universe, but like it’s universe it feels somewhat underdeveloped.  While the cityscapes are impressive backgrounds to fight against, taking a minute to fly down and look at the people reveals them to be a bit more advanced than Lego minifigs but less animated.  The dash attack, when you miss your target, drills into the earth, but the hole it leaves is basically an octagon that would have looked semi-passable on the old PS1.

Like the scaling out in the universe, the level of detail on Earth tends to pop in and out in a distracting way, and if you’re not in a city then the landscape gets very simple, very quickly.  I wanted to explore my real-world home but the the globe doesn’t turn, leaving the US constantly in darkness.  Even something like the flowers that cover hillsides in the wild are also growing at the bottom of the Pacific ocean.  Megaton Rainfall has epic aspirations, and when viewing the action from a macro scale it works nicely, but take a moment to look at the small details and it’s impossible to ignore the seams in the world. 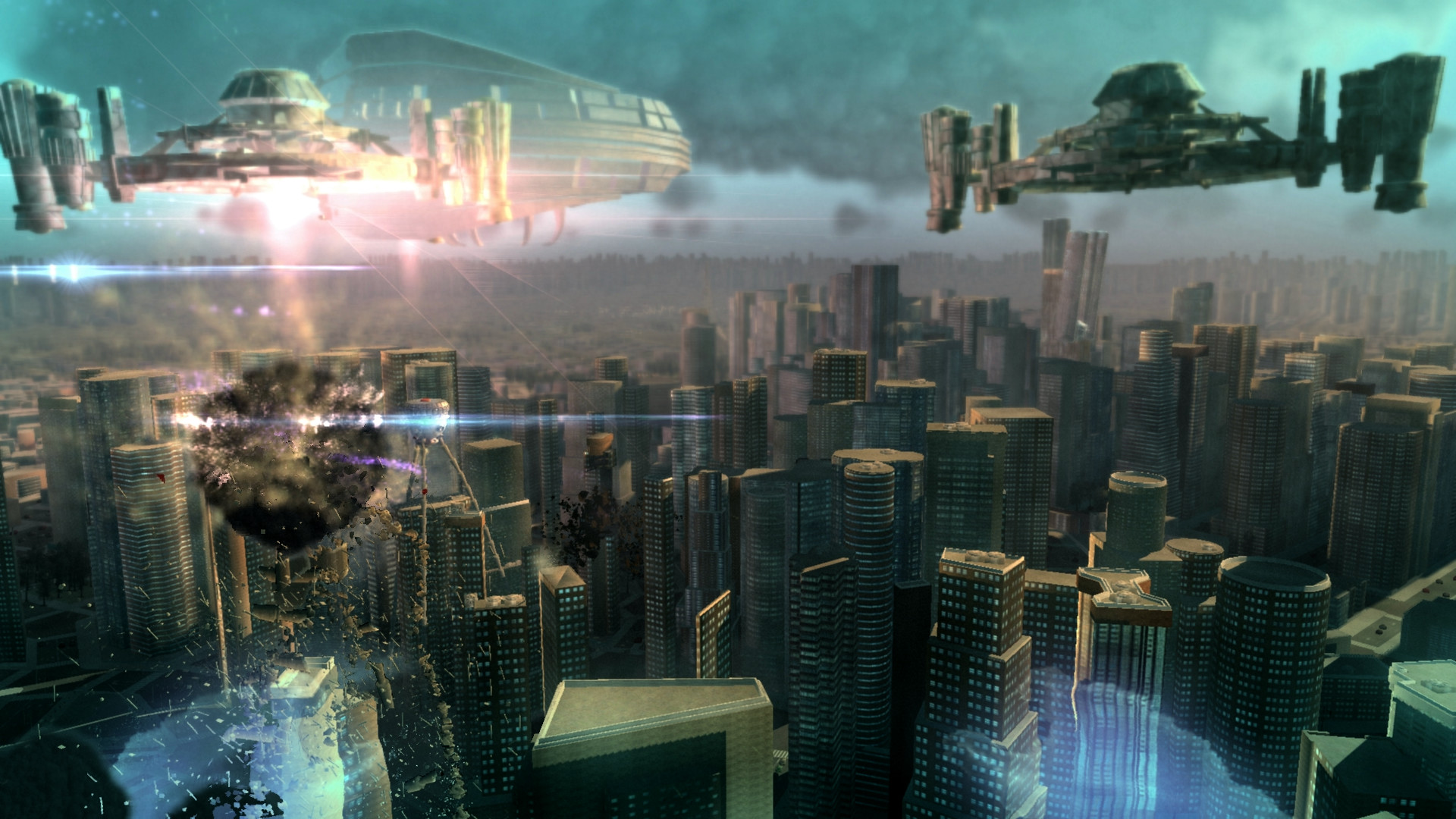 While Megaton Rainfall may have bitten off more than it can chew in regards to the stage it takes place on, the alien-fighting action is a fantastic spectacle.  Buildings crumble dynamically, shockwaves ripple the earth, zippy little enemies fly out of massive motherships and I even failed a mission once when a laser cut the entire planet in half.  The enemies are constantly changing, with new ones showing up all the way to the final mission, and while there are only nine missions total each one is memorable.  The only truly weak part is the story, which left me hoping there’s an alternate ending somewhere I haven’t seen yet.  With the size of the universe away from Earth it’s hard to imagine that all the action is focused on one little globe circling a yellow star on the outside of an arm of a pretty galaxy.  More likely, though, it’s the mark of a good game that, when the fighting is done and all that’s left is score attack and Hard mode, it still leaves you wanting another epic battle against the destructive alien threat.