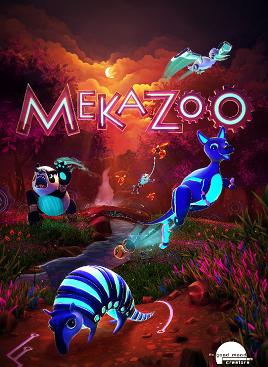 Mekazoo might be the most colorful, loud and fun thing to come out in recent memory. If there is one thing this game does, it pops. Mekazoo is quite simple on the surface. It’s easy to see it hearkening back to 2d platformers past, all while bringing its own stylized visuals/game play to the mix to create an experience that rivals that of the best platformers.

Mekazoo is straightforward, the game starting out with the player as a mechanized armadillo, who awakens in whatever random lab meka animals happen to be in (because who really cares, right?), immediately realizing something has gone wrong with all his mechanized animal friends, essentially being nowhere in sight. This of course leads to the first tutorial level and just what the game is all about.

It becomes immediately apparent the armadillo only has one ability, mimicking that of Sonic. A rolling ball that can speed up, thus allowing the player to easily speed through the first few levels if they can pick up the pace (no pun intended). Rather quickly, the armadillo comes faces to face with his first boss, in the form of a giant toad. Of course, if one has played any game ever, it will be apparent that three hits in some way should do the trick and that it does. This is where the game really shows its colors, though, and just why so much enjoyment can be had. As with many platformers, a new ability is acquired upon defeating the toad. It does not however go to the armadillo. Instead, the player unlocking a new animal to use. What is it? That’s right, a frog! Having unlocked another animal, the real game begins, and thus ultimately the thing that will lead to the meta game of Mekazoo, because trust me there is one. 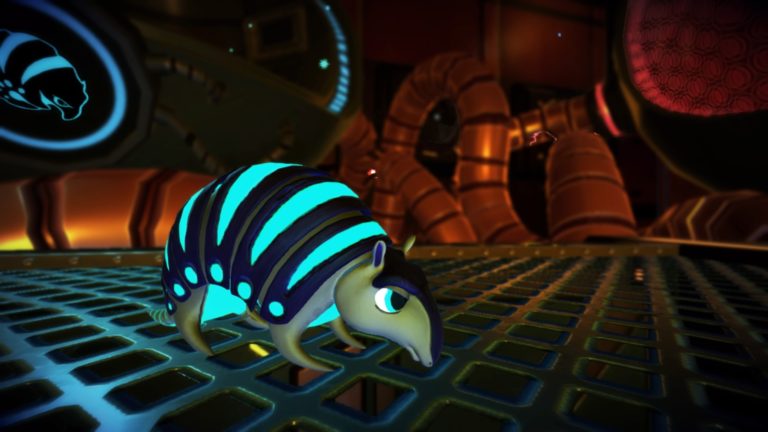 After acquiring the new frog friend, the first real level is introduced, showing the player that they will be combining the abilities of the armadillo with the frog to get the ultimate platforming experience. This is done in the simplest of ways, making it fun and easy. Platformers where one ends up banging their head against the wall can be frustrating and Mekazoo is nothing but nice and simple. Literally, only two buttons plus movement need to be focused on. The switching of animals is done, with the touch of a button, and with no delay time. If a player is really good, they can even use this to their advantage switching at moments of life or death, thus pausing the game in a sense, allowing for a quick save if in peril (of one’s life, not a literal quick save).

The gameplay is something to be praised. The Good Mood Creators have put every ounce of passion into creating a new age platformer for any seasoned player and those new to the mix. In total, there are five animal friends one can switch between, each coming with their own unique ability. While not freely able to switch between every animal simultaneously, it remains different combinations of two. As one begins to unlock more animals, more abilities are gained, and new areas in the levels themselves will open. All in all, one will be combing all abilities in whatever fashion the deem necessary. Mekazoo allows for the freedom of being able to approach situations in many ways, ultimately, coming down to how clever one can be. More than a few times I would approach a situation in a level only to realize if I approached it with a different animal pair it would be much easier. While the gameplay may be smartly designed with heart to show, it doesn’t always perform up to the task at hand. More than a few times, when switching between animals, if I was in motion my animal would become stuck behind something in the environment or freeze altogether. While this didn’t happen consistently enough to make me want to put the game down, it happened enough to frustrate me. Especially if it was a level I had been having trouble on, only to have finally mastered it. I’m sure a patch will fix this. 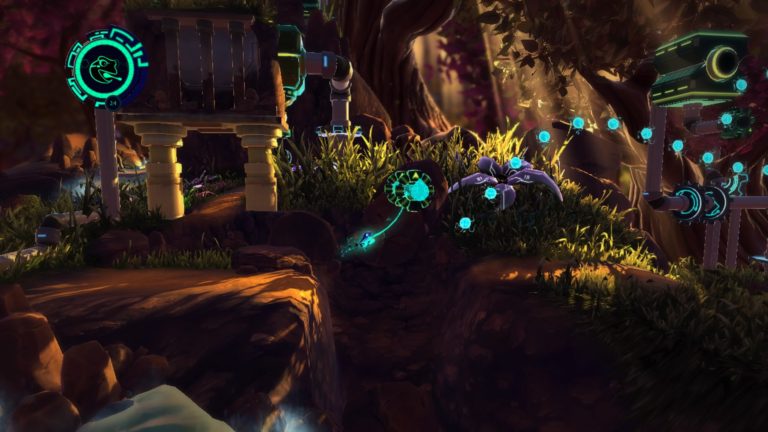 Speaking of levels, the level design mimics that of platformers past while staying modern. It combines aspects of both 2D/3D much like any recent platformer. In total, there are five areas to explore, each presenting new challenges and levels within to fit the theme. The themes, being of course, what most platformers showcase: jungle level, ice level, desert level, etc. This is not tiring though, Mekazoo is all about presenting a platformer tipping its hat to previous generations. Each level is smartly designed, creating challenging courses, while allowing for mastery over said courses. There is more than enough busy work to keep any player going. The levels include a slew of goals to achieve. This ranges from; completing the level in general, to time trials, to defeating certain enemy types. There were a few frustrations out of the levels as well. The camera at times would position itself in a way that it would become hard to see where my animal friend was because of how far back the camera had pulled. Combined with the striking neon visuals and how fast the gameplay can be, it would become even harder to figure out where exactly my animal was. The animals themselves are neon, creating for a camouflage effect when the camera is pulled out as such. The other problem I encountered, and this only really happened with one area of the game, was heavy frame rate drops. It happened in a level where there is a ton going on screen and it seemed the game had a hard time keeping up. This didn’t help with the fact that the area was comprised of such difficult levels late in the game.

The simple idea of not having too much of a backstory tied to the animals themselves is a blessing, allowing one to focus on the game itself, instead of becoming overly invested in the characters. While many may love Mario/Sonic, it’s nice to have a game that doesn’t allow for too much attachment, while maintaining just enough. More than anything this game heavily borrows from games more akin to Donkey Kong.  I was happy to unlock all my animal friends, even becoming dedicated to a few (I’m looking at you frog/bear), each animal being subsequently unlocked, as such the first boss. By far my favorite thing about the animals were the customization options. This includes changing the color of the animals, to the glow, and even giving them silly costumes. I found one costume set in particular I ended up not changing for the rest of the game. It’s ridiculously wonderful. 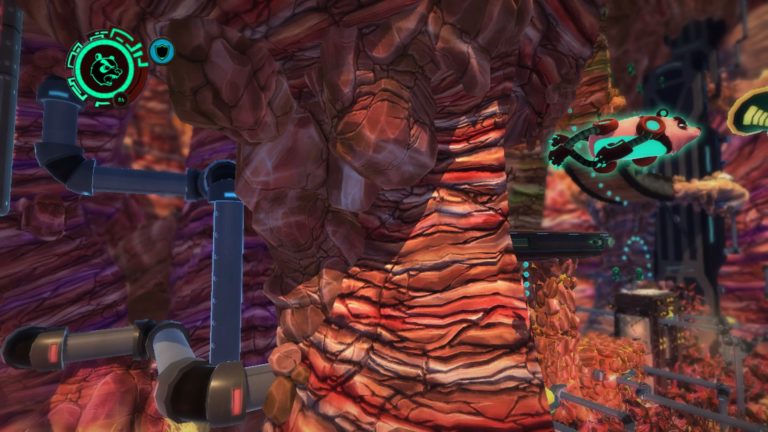 By far the most prominent thing in Mekazoo are the visuals. This game is overflowing with a color palate composed of dazzling neons and vivid complimentary colors, creating some striking backdrops. As stated, this game is so loud it will burn your eyeballs out, and that’s a good thing. There is always something to be looking at when not focused on the platforming itself. This game is easy on the eyes; I died numerous times because I was focused on something in the environment, instead of the platforming itself.

Yet, even dying wasn’t a hassle, because of just one more thing that makes this game a pleasure to play: the music. The soundtrack is outstanding, again repeating the pattern of everything else in Mekazoo of combing the new with the old. It didn’t matter how much I died, because the beats were so lush I remained in a Zen-like trance while playing. I could not be happier bobbing my head to the beats, while matching it with the rhythm of my own gameplay. 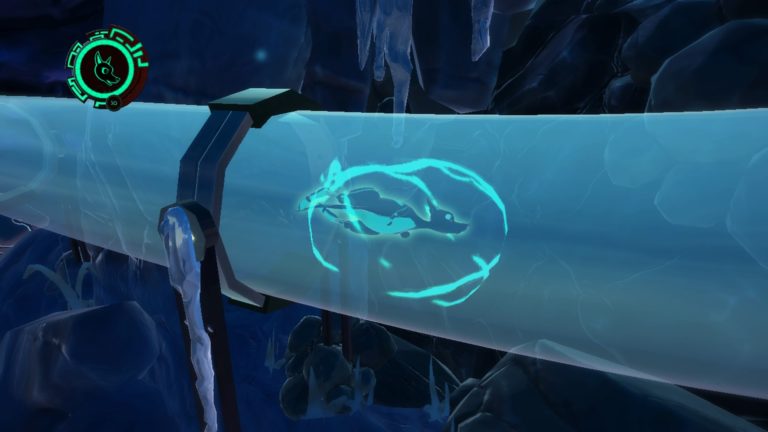 Mekazoo proves to be a joyous platformer built on the ideas of just about any platformer one can think of, specifically sticking to ones that came out of the 80s and 90s. With its vibrant visuals, wonderfully fun, yet challenging, level design and of course beats to match, it’s easy to see why Mekazoo is worth one’s time. Those who take enjoyment from a good platformer will probably find comfort in Mekazoo. For the minor flaws encountered, this deters in no way from the overall experience of such a lovingly-crafted game. Mekazoo proves once again, like many games to come out this year, that doing it old school sometimes creates the best experience.