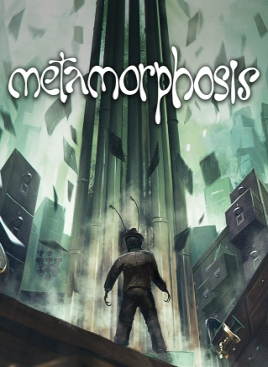 The works of the German author Franz Kafka have inspired many other creators across several mediums, and video games are no exception. Even major franchises like Resident Evil have paid tribute to him, with Resident Evil: Revelations 2 using Kafka’s tales as a central theme for the story. But Kafka’s most famous novella has always been The Metamorphosis, and while we may have seem other games create homages to that particular bit of fiction before (Bad Mojo immediately springs to mind, being an adventure game you play as someone turned into a cockroach), developers Ovid Works seem to be aiming to create one of the ultimate memorials to Kafka and his signature piece with Metamorphosis, their latest title. But did they end up paying proper respect to a literary great?

In case you’re unfamiliar with the source material, Metamorphosis sees you playing as a salesman named Gregor, who wakes up one morning to find out that he’s suddenly transformed into an insect. Instead having to deal with his family and figure out how to adjust to his new life, however, Gregor instead desires to be human again, coming across a job offering from a mysterious place called the Tower that promises him just that. But getting to the tower requires having to navigate several mysterious nooks and crannies around his friend Josef’s house, who’s suddenly being arrested and put on trial with no explanation for what he’s done. So in order to help Josef and return to normal, Gregor has to navigate an almost literal maze of bureaucracy in the insect world in order to fully gain access to the Tower. 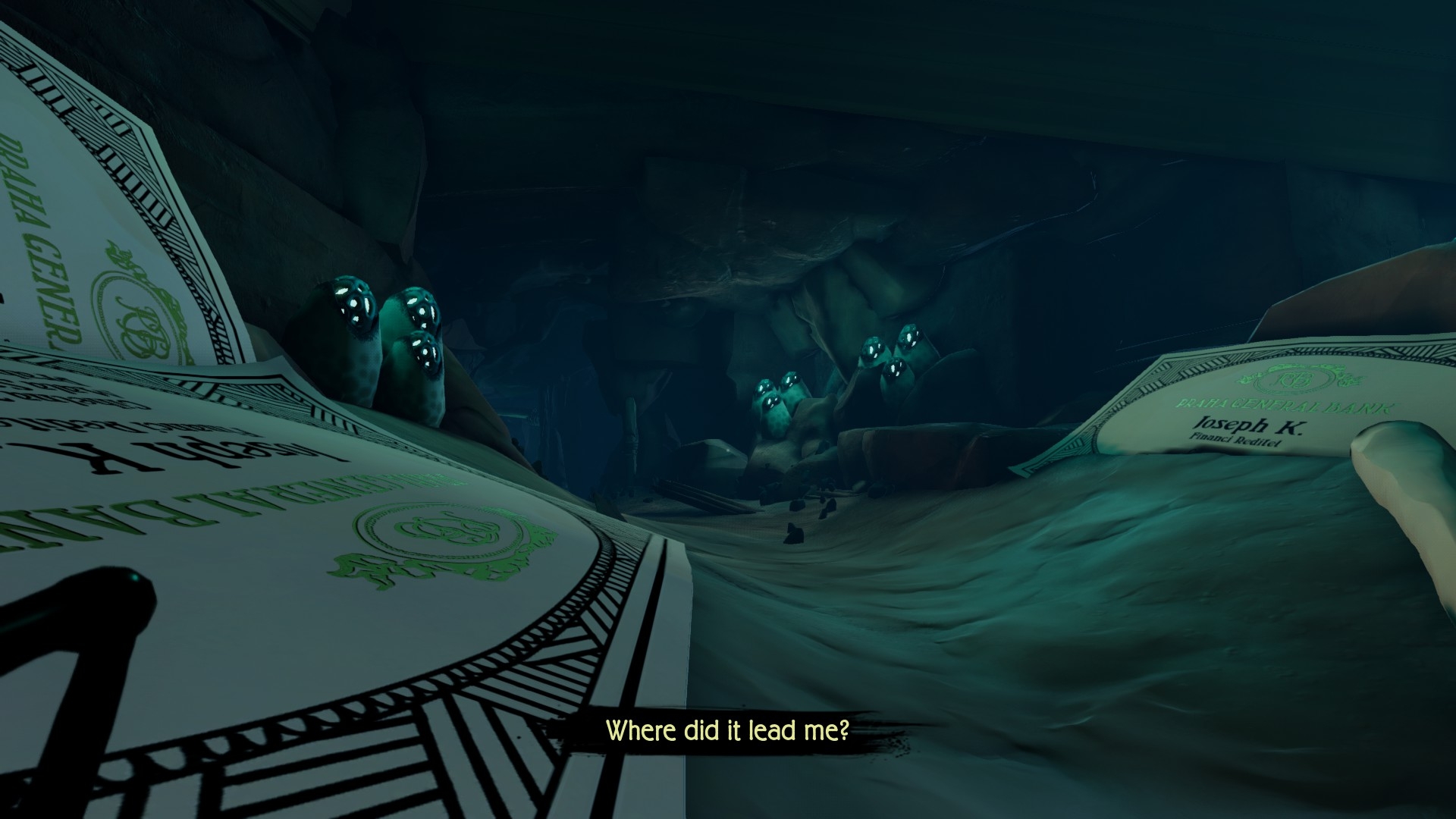 Despite the title of the game, what we have here is actually more of a mashup of several of Kafka’s works, including The Metamorphosis, The Trial and The Castle. Not that this is necessarily a bad thing, mind you. In fact, the game actually does a good job of merging together Kafka’s stories, crafting an intriguing and surreal, unique take on all of it, while keeping The Metamorphosis front and center. It almost gets dreamlike at times, with Gregor rarely ever being shocked at his new form, and the focus being more on the absurdity and awe of his new surroundings, such as the inside of an actual printed letter that he’s sunk into or a massive filing cabinet filled with pneumatic tubes and crude robots.

The world design is easily the highlight of Metamorphosis. The devs clearly had a blast playing around with the size of the character and building levels around it, like mold-filled caves in the walls with fungus and business cards littered throughout it, an entire insect lounge hidden in a gramophone, houses built out of playing cards, matches and driftwood, and more. The scenery is a feast for the eyes…the character design, less so. Metamorphosis isn’t exactly a graphical powerhouse, but it has an amazing art style. Unfortunately, that makes the handful of iffy human models (with one officer constantly looking like he’s skulking about, ready to pounce, regardless of the situation) and the repetitive insect designs (spiced up only with the occasional accessory) stand out more in their awkwardness.

Luckily, what the characters look like is overpowered by what comes out of their mouths (even though the insects basically speak in subtitled gibberish). That is to say, the writing is incredible, managing to mix such a fantastical world with more mundane aspects of life such as paper-pushing, creating several neat doses of humor in the process. It’s worth seeing everything through to the end just to see what pops up next and where this bizarre journey goes, but how do we travel along this journey? Mainly via platforming. Skittering across everywhere on six legs, running and jumping between chair legs, stacks of paper and whatnot. 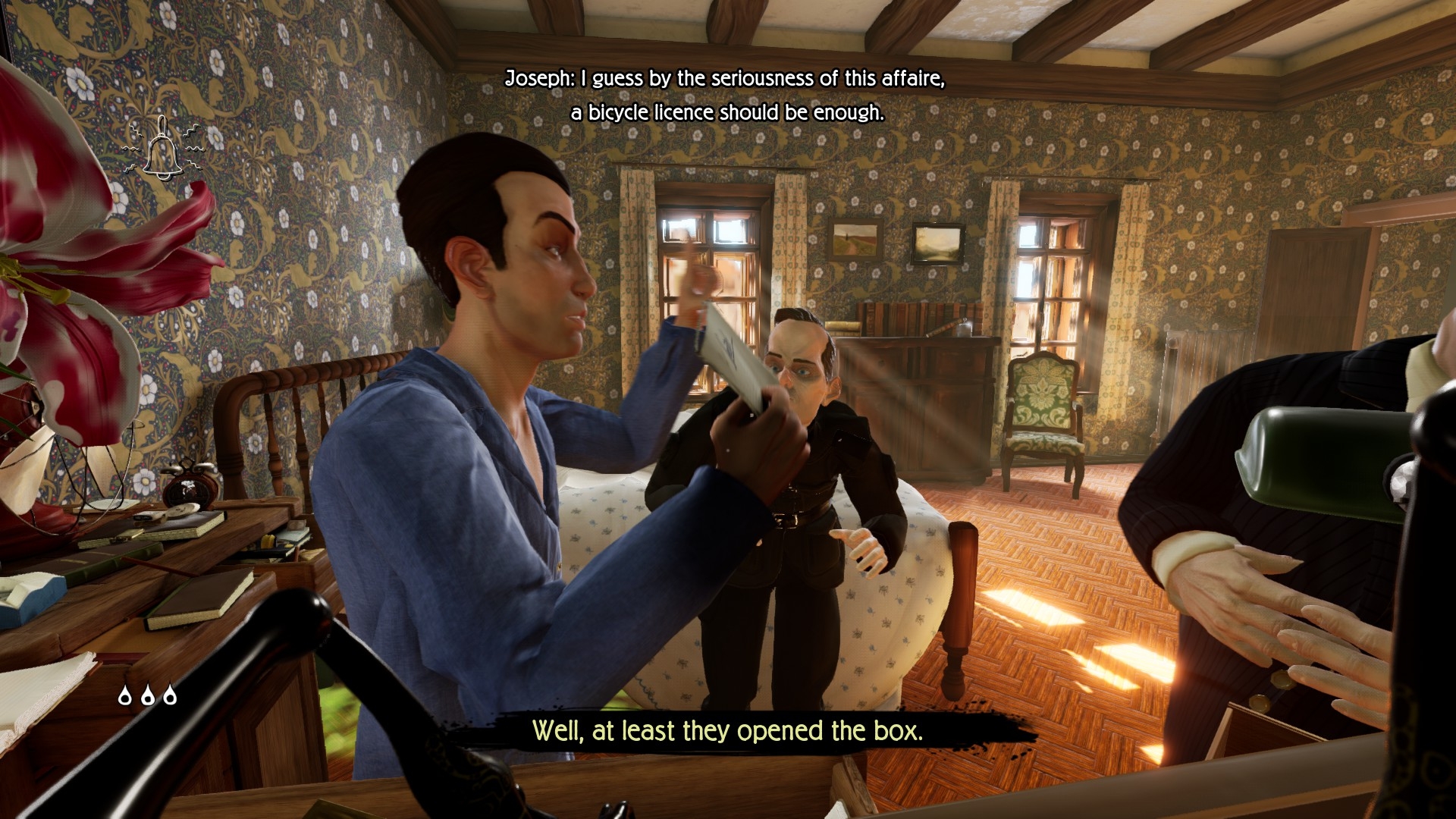 It’s standard procedure, but it’s pulled off well. Levels are nice and big, even when linear, there are a fair share of natural hazards like pesticides and massive drops to avoid, and even with a viewpoint close to the ground, jumps are easy to pull off. There’s a notable twist in that Gregor can come across glue or ink to use in order to climb vertical structures or use to cover surfaces, which creates a lot of possibilities and natural puzzles. It’s a nice touch, and the climbing controls are perfect, although the ability to stick to almost anything means confusion over the right route to take on certain occasions. But for the most part, though, Metamorphosis is a solidly-constructed, fun platformer…up until it stops being a platformer.

After you complete an extensive platforming section through a giant piece of machinery to get a certificate that Gregor needs, you head into a rather large insect city. All of a sudden, random NPCs are walking around instead of being stationary like before, there are more insects to talk to, and you’re thrown into a fetch quest with open-ended solutions and moral choices. The platforming basically disappears in favor of a more traditional adventure game. And it just feels sudden. There’s no transition into this portion of the game, so I was rather shocked after learning that I had somehow condemned three insects into slavery that there was a second way to go about achieving my goal. 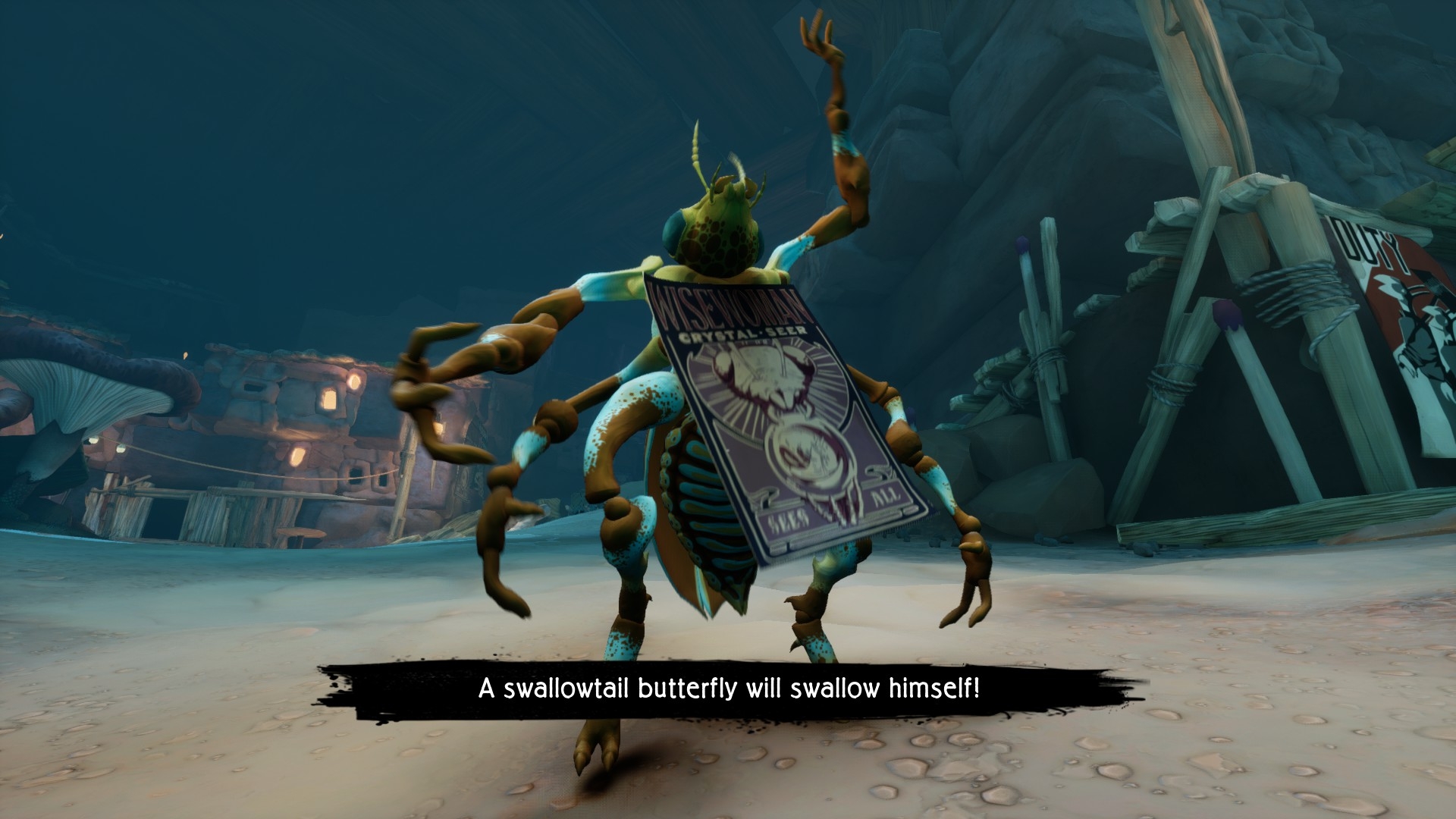 The whole twist there is jarring and it basically sums up what may be the biggest problem holding Metamorphosis back: The fact that it seems rather indecisive when it comes to what kind of game it wants to be, or that it knows what it wants to be, but doesn’t execute it all smoothly. It feels like it’s aiming to be a platformer/graphic adventure hybrid, except it kind of botches the “hybrid” part. For the majority of the game, it’s all platforming with occasional NPCs scattered about to ask where you should go next, but they all kind of just direct you to the same place. There are a few puzzles as well, like having to spread glue on a wire to get it to connect or reaching a stamp to get it to fall on a document, but they’re all more related to the platforming segments.

But the second you enter the city, boom, sudden graphic adventure. There are a couple of minor platforming sequences afterwards, but they’re short and linear. And the climax instead basically involves a giant puzzle where you have to manipulate a machine in a certain way and/or order, heading back heavily into adventure territory, and how you handle it plays a major part in the conclusion (the various choices do allow for a decent amount of replay value, along with some hidden effigies to try and hunt for). It’s not that Metamorphosis is bad when it comes to any of these segments/genres. Aside from some awkward controls when talking to a few insects, the platforming, adventure and puzzle bits are all pulled off well on their own. But in trying to mix them together, Gregor’s captivating and odd tale sadly becomes more awkward in its presentation. 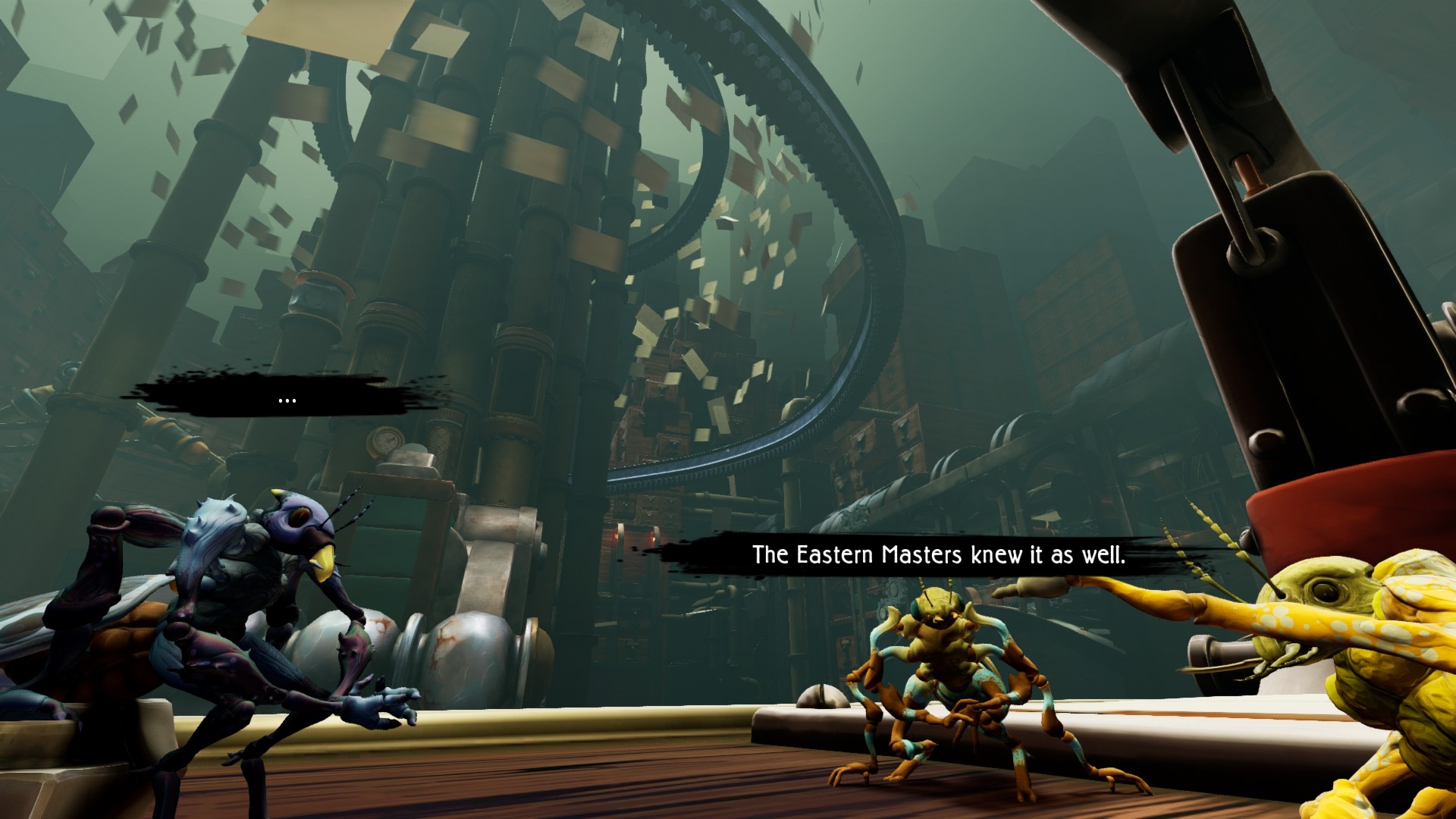 Metamorphosis manages to whip up an impressive tribute to Franz Kafka in its quick story thanks to its offbeat sense of humor, style and eye-catching world. It’s just a shame that the game flounders when it comes to figuring out how merge together the various gameplay aspects needed to keep going in this tale of transformation. Still, it does have enjoyable platforming and a few surprises here and there, so if you have about three to four hours to kill, this is a crash course in abridged Kafka worth checking out.