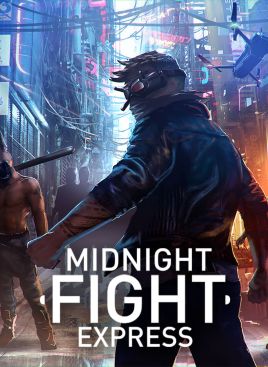 Midnight Fight Express, the latest game from developer Jacob Dzwinel, immediately hits the ground running with both guns blazing. It’s a gonzo isometric action about fighting of hordes of colorful criminals, gang members and the like, constantly shifting scenes at the drop of a hat. One moment you’re leading from speedboat to speedboat while shooting down a helicopter, another bashing in a pirate’s head in with a frozen fish, maybe fend off makeup-clad dancers armed with twirling blades in a diner. It is the type of game to make sure every moment feels like it came straight out of one of the most insane action movies ever made, one where you control the hero as they bash their way through everything thrown at them. Non-stop action everywhere.So with that in mind, why was I starting to feel bored while playing it after a few hours?

First, I want to stress that overall Midnight Fight Express is good, but after a while, something just stopped clicking. Something made it start to feel like playing it was dangerously close to becoming a chore. And yet, it shouldn’t. There’s a lot to love about the game, yes. And yet, something felt wrong, even though it almost felt like that shouldn’t be the case. What went wrong when so much was going right, and why does it still feel like it’s not enough to truly kill the game as a whole? Well, let’s try and find out.

Set in a city under siege by seemingly every single criminal possible, Midnight Fight Express sees you playing as someone known only as Babyface, recounting their tale to a pair of police officers. It would seem that on the night of this siege, Babyface was sent a talking drone that told them how they were actually a sleeper agent programmed with a ton of fighting skills, and that they were now being activated in order to take down the boss behind all of this sudden chaos, preferably via the method of beating the crap out of everyone in your path. And that is all I will say about the plot, because it quickly starts to go off the rails after a while. In the best ways possible, mind you. 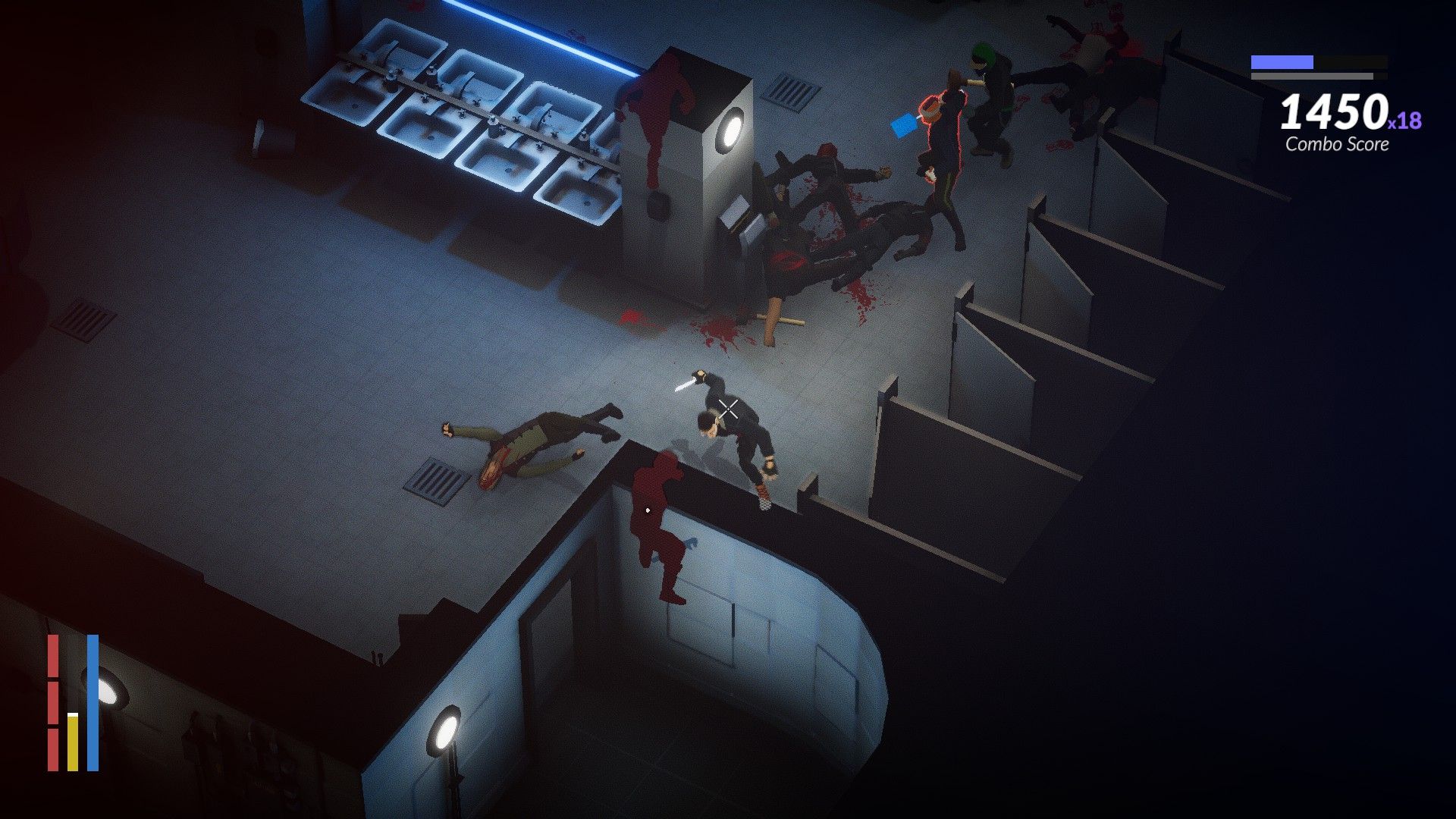 The numerous twists and turns in the plot to Midnight Fight Express easily make up one of the best reasons to keep playing it, just to see where things go from here. The number of connections between each crime boss and their lackeys and every other group practically hits “six degrees” levels after a while, and it’s delightfully absurd. It helps that for the most part, the game has a good sense of humor all around, with each gang having their own unique flair and your drone friend nicely delivering a good supply of snark and quips in between fights. And yet there’s still genuine intrigue to be found here as well, especially given the hints to Babyface’s history, all worth paying attention to.

But the meat in Midnight Fight Express, of course, is its combat. While the obvious comparison when it comes to gameplay is Hotline Miami, there’s a hint of Arkham Asylum in the combat as well with how fluid and intuitive things are, allowing you to seamlessly jump to other enemies and deliver a stunning blow or a finisher, then have you successfully parry an attack and deliver a successful counter, all with intuitive controls and prompts. There’s also a ton of skills to learn that you can try out in a playground in between levels, not to mention a nice variety of weapons to wield, ranging from guns to makeshift bladed clubs or even just good old cardboard boxes to kick into an enemy’s face at the push of a button. 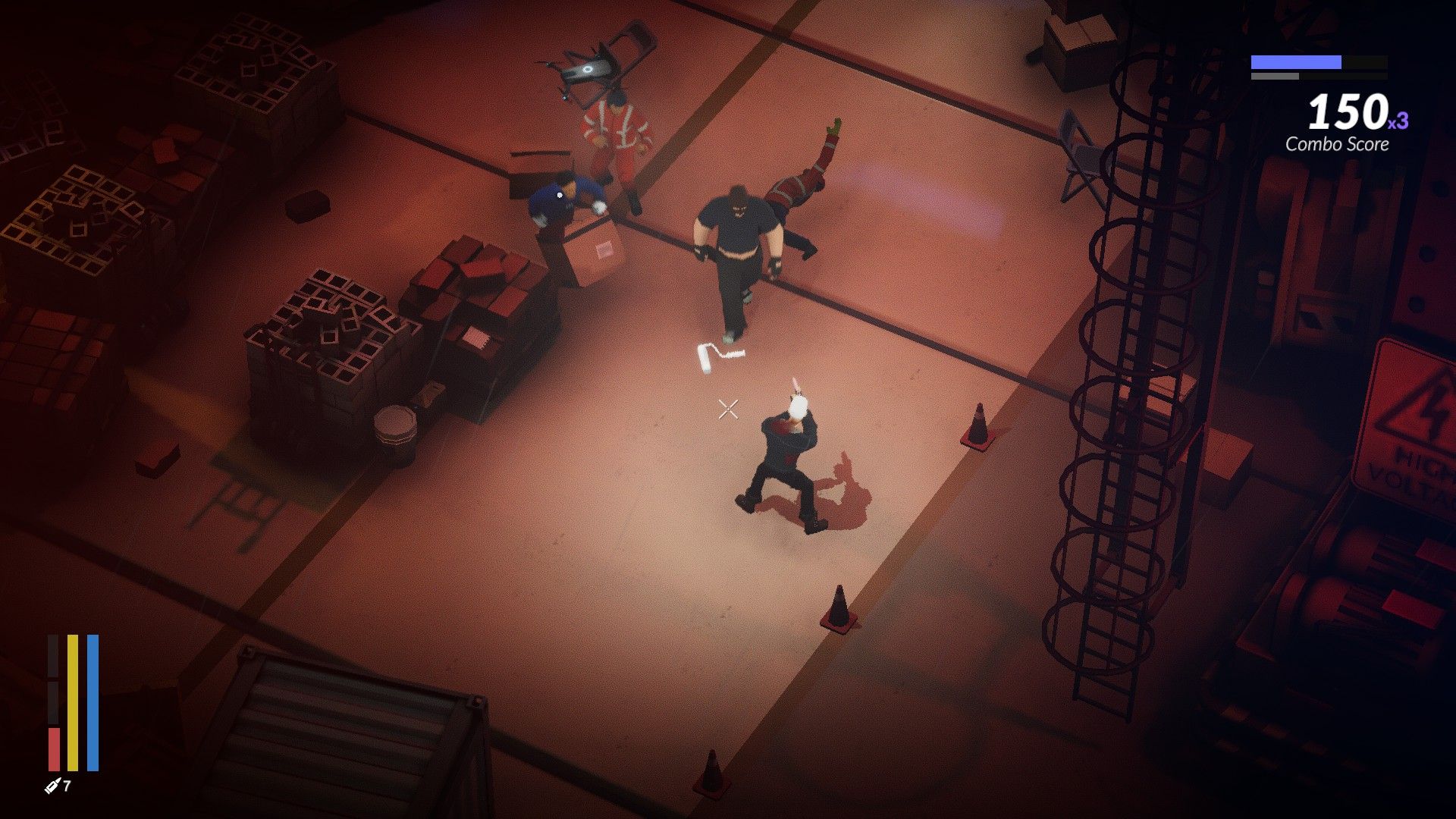 Speaking of the levels, Midnight Fight Express also features unique setpieces that make for memorable levels. One set on a dock has you battling enemies while avoiding a crane trying to crush you with a shipping container for a good stretch of the level. Another is just one massive brawl in a huge restroom, like a version of the fight scene from Mission: Impossible – Fallout on steroids. And then there’s one level that has you taking a detour to a video game developer’s office, which I won’t try to spoil that one too much, aside from maybe an out-of-context screenshot. But mix in a variety of insanely colorful enemy designs (with new ones seemingly being introduced with each level) and the level design is a easily a highlight here as well.

The colorful enemies mentioned there might not be the greatest up close when it comes to the visuals in Midnight Fight Express (though the environments and style in general are still fine-looking), but the battles are accompanied by a feast for the ears. Noisecream provides the soundtrack for this twisted brawler, and it features a ton of pulse-pounding electronic jams that perfectly fit the chaos, with each unique track giving off that perfect burst of audio adrenaline while each blow lands with a satisfying crunch. The music is easily one of the biggest highlights as well, and probably worth purchasing on its own.

Midnight Fight Express has some great action accompanied by inspired level design, a killer soundtrack and a twist-filled story with a grand amount of absurdity. So going back to the original question, why did I feel bored with it? Well, bored may sound harsh, but there’s just something about the progression and escalation in Midnight Fight Express that feels off. While the game does its darndest to keep things spicy by adding a new enemy in virtually every level, the emphasis on speed and the fact that they all keep attacking in groups means that there’s barely enough time to give most of them any notable attention. For that matter, even with new skills to purchase from a skill tree in between levels, most of them never come across as necessary, and things are always too frantic to focus on pulling them off. 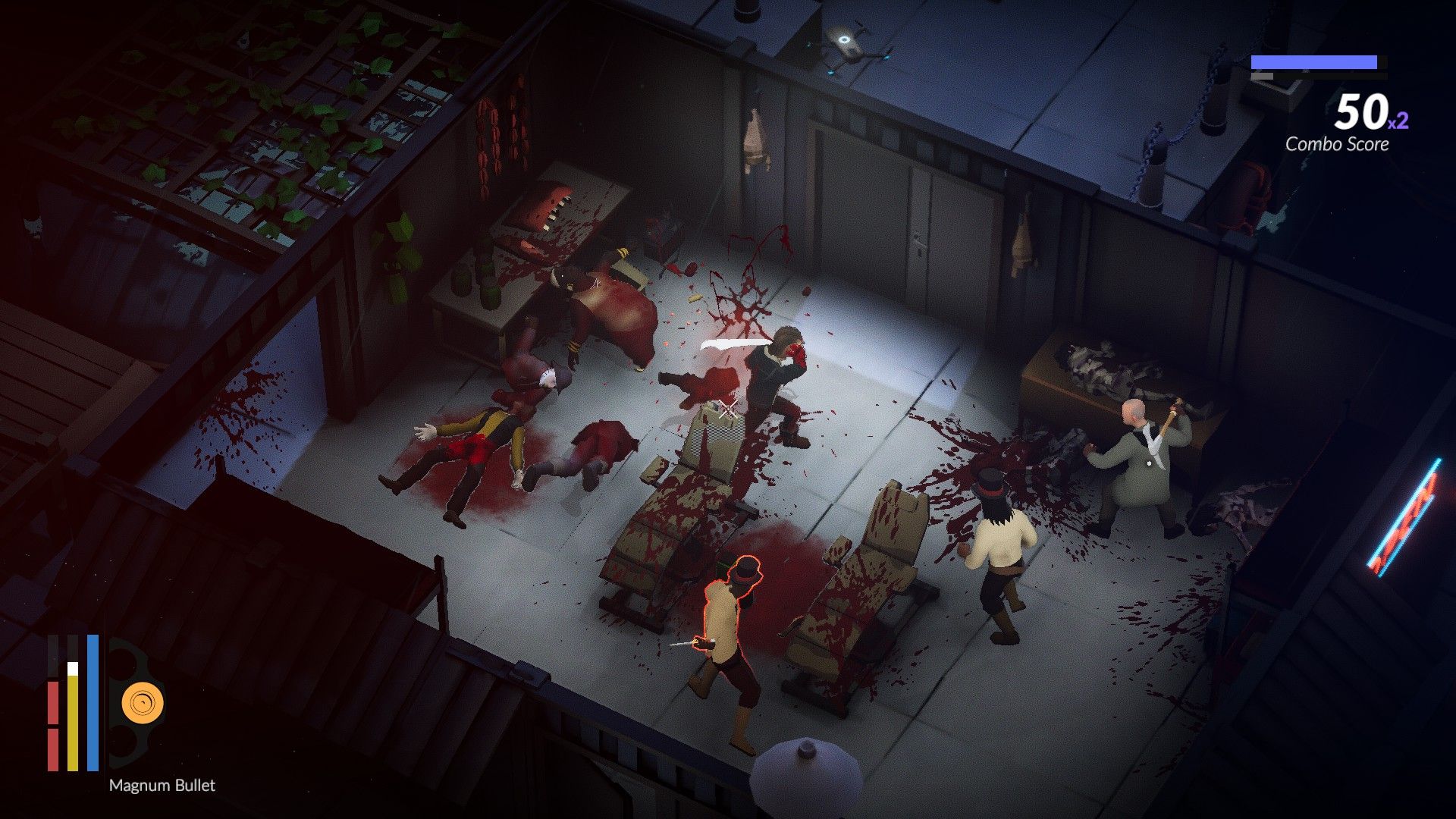 Combat just sort of becomes a blur of sameiness after a while, an exercise in chaotic button mashing, not helped by the perspective making things cluttered at times. It’s just rush, right, rush, fight, with the occasional intro banter and whatnot. And in that, I think I’ve finally discovered what killed the momentum in Midnight Fight Express for me. Its biggest strength is that it’s non-stop crazed action…and yet that’s arguably its biggest weakness as well. It never feels like there’s a lot of breathing room either inside or outside of the combat, which all blurs together too much to feel fresh after a while. And at the same time, it constantly throws new enemy variations, plot twists, weapons and such, but now that means the game never finds a comfort zone. It aims for that arcade-style rush and gameplay loop, yet it’s always throwing either not enough or too much to succeed in hitting that target perfectly.

True, you are encouraged to master the skills in order to go back and complete the various challenges in order to unlock new clothing, skins and more, giving you different goals to reach for, but I never felt a desire to do so. Collecting gold teeth from enemies is a chore, the hidden individuals you can talk to to learn more about the world don’t add much (and some are barely hidden), and the unique tasks per level never felt inspired. There are those in search of a larger variety of challenges who might appreciate these additions, but after a while they just started to feel more and more like padding.

One last thing: while the commitment to over-the-top absurdity is something to commend, this does not extend to its use of pop culture references, which start to increase as the game progresses and become more eye-rolling as they pop up one after the other. There are blatant nods to The Warriors, Call of Duty, Fight Club, Sons of Anarchy, Chef, and yes, even Hotline Miami just to make the comparison more blatant, among several others. And yes, the emphasis is on references moreso than any actual jokes. Again, it just feel like throwing too much, as if the game is afraid it might lose the player’s attention. You already have a talking drone quipping about players beating up mutant rats after watching gang members get run over by trains, Midnight Fight Express. You already have our attention, you don’t need to stoop to this. 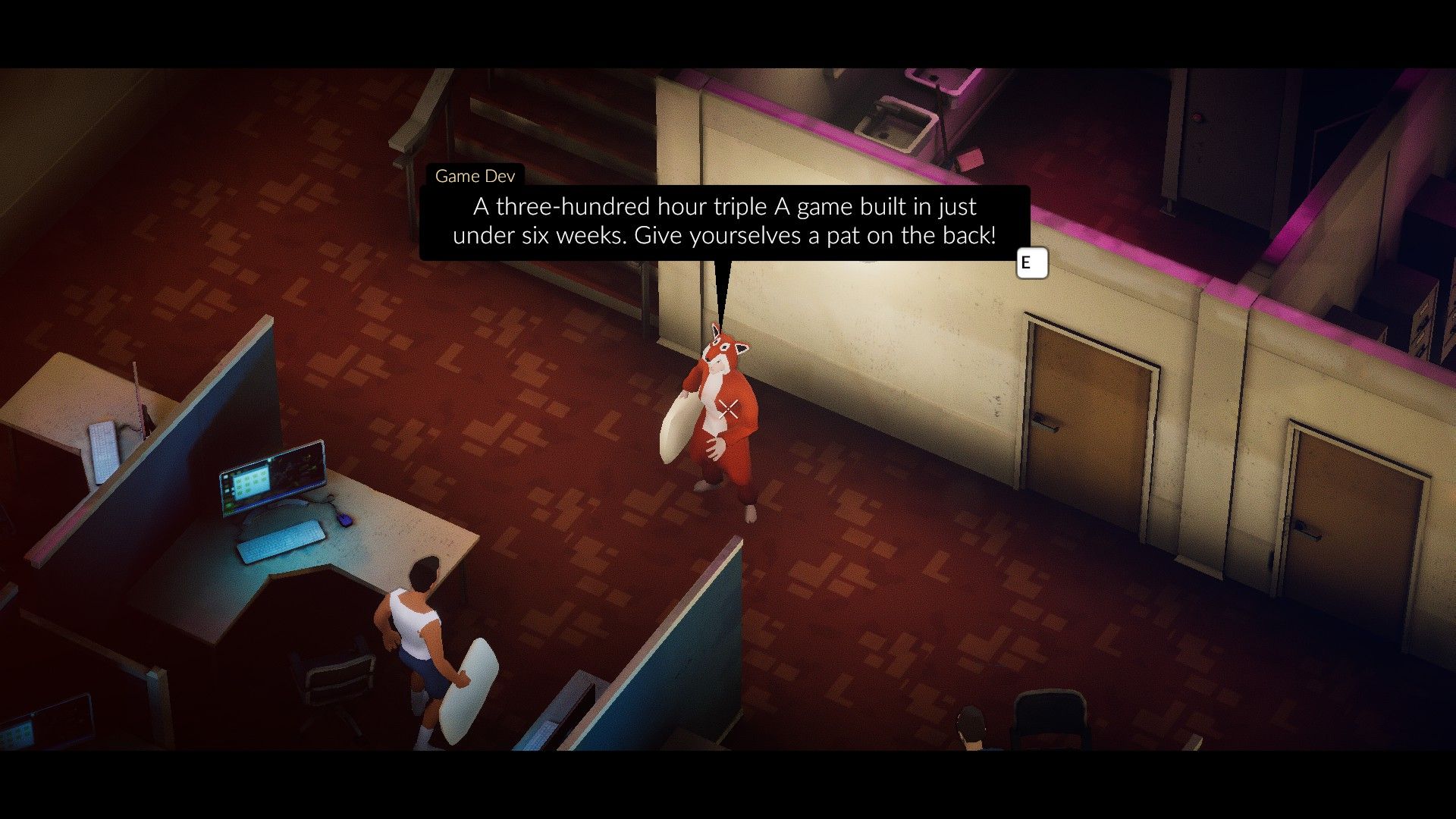 While Midnight Fight Express falters when it comes to keeping things fresh, there’s still enough of a nicely-twisted plot, impressive levels with great action setpieces, and a terrific techno soundtrack that goes alongside the fast-paced combat to keep things enjoyable overall. Beat-’em-up and/or fighting game enthusiasts and speedrunners will probably get the most satisfaction out of the game, but there’s still enough here for anyone that’s worthy of giving things a whirl.