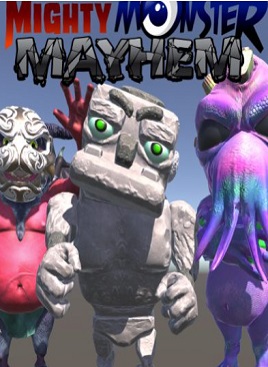 As a concept, turning Midway’s classic city destroyer, Rampage, into a VR game doesn’t get more perfect. Melding old school, tried and true gameplay with the power fantasy of inhabiting the body of a giant world wrecking monster is so obvious that one has to wonder why it hasn’t already been attempted. Considering that VR is still a very niche space, the fact that I didn’t learn about Rank17’s Mighty Monster Mayhem until the day it launched on Steam didn’t raise any alarm bells. Instead, I was more eager to jump in as soon as possible and get to razing towns. That eagerness quickly gave way to crushing disappointment, though, as expectations were crushed like a sleepy hamlet under the ministrations of a kaiju with a stubbed toe.

It’s not as though the developer didn’t have some good ideas for the implementation of the concept, as basic movement is handled extremely well. Using the Vive wands, the player simply needs to hold down the side buttons on each controller and swing their arms as though they are walking with a purpose to move forward. Changing directions is as simple as turning in place. Translating the exaggerated movements into gameplay goes a long way to getting in the giant monster headspace, and it’s easy to feel like a kid pretending to be a dinosaur while doing this. Climbing buildings also works perfectly in theory. The player puts one hand above the other, holds the trigger to latch on, and continues up.

The way these two inputs are handled makes everything else so much more frustrating. Leaping, for example, is supposed to simply involve pressing a button on each wand while holding them behind the hips, then swinging them forward and releasing. This didn’t work once despite ample time spent on experimentation. Simple things like grabbing items such as stationary cars or trees to throw were also futile half of the time. Same goes for tearing chunks off of a building, where the player is supposed to grab on and turn the wrist to pull a piece off. More often than not, the game will take the input as climbing.

With the controls in dire need of tuning, it’s up to the gameplay itself to make up the brunt of the fun. Lamentably, Mighty Monster Mayhem struggles here too. Much of it comes down to some major technical and design issues. One of the most baffling issues comes in the form of the building designs themselves. Instead of feeling like an actual skyscraper, or a cartoonish facsimile thereof, it seems as though they are stacks of steel with a concrete candy coating, meaning there is a noticeable gap between the outer layers of the building and the interior, as though the innards are the Earth and the exterior is the ozone layer. Commonly, the player will open a hole and then climb up the inside of the building with the outer concrete behind their back, making for a confusing, almost unplayable mess. 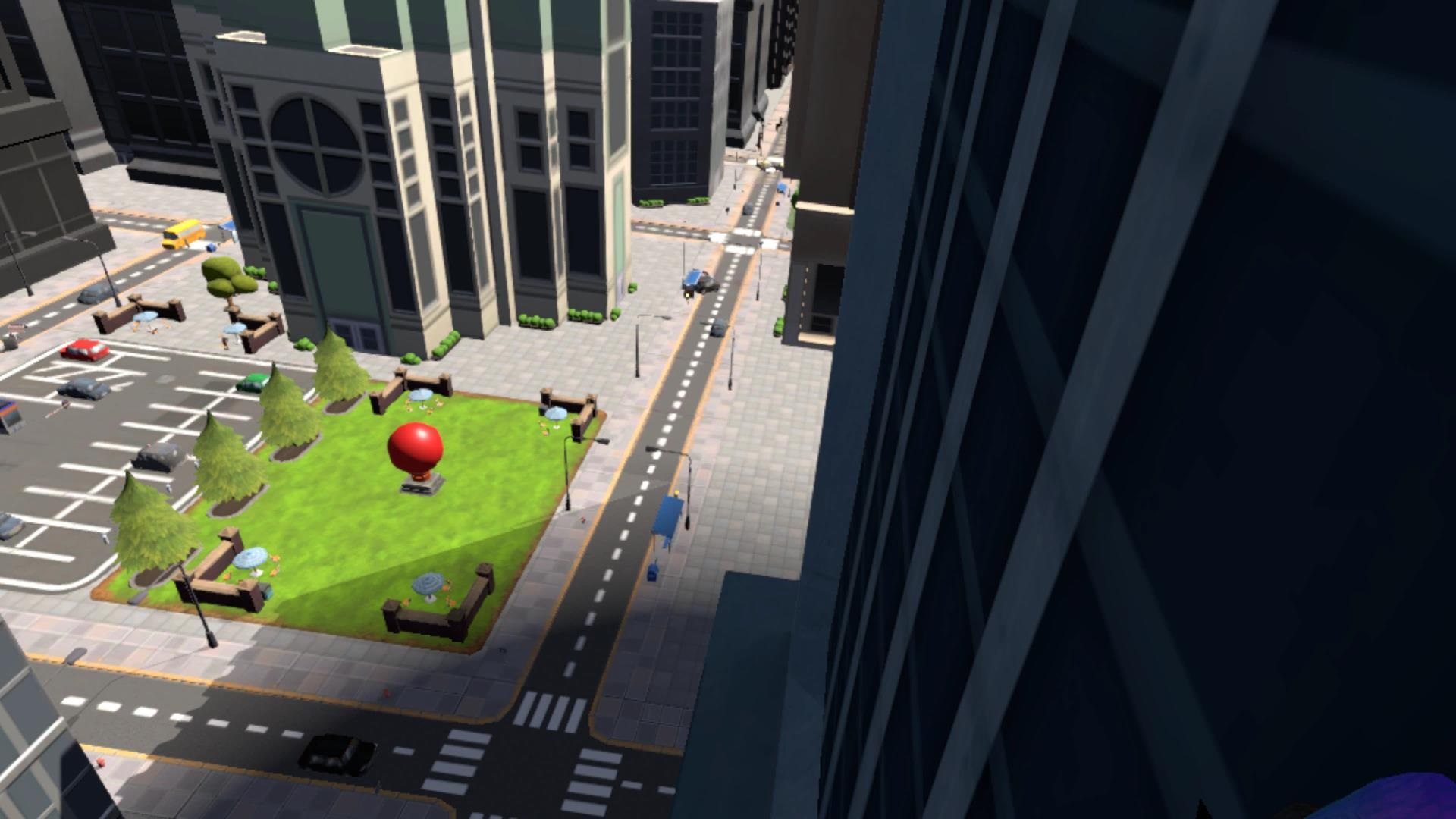 There is also the matter of the severely constrained field of play. Each level is surrounded by an invisible forcefield, with buildings and other items outside of it completely immune to the tender loving an enormous abhorrent creation of science run amuck can bestow. As a result, each level starts with throwing objects in random directions to learn the narrow boundaries before getting down to the serious business of extreme urban renewal. Then it’s a matter of performing some building destruction until the military or another monster comes along, while eating people and power ups to keep the health at a… healthy level. Certainly this is something that can be said about Rampage, but it didn’t feel as claustrophobic simply due to the fact that the 2D plane and quickness of completing stages meant that there was little time to consider it. Not so here. These buildings can take a beating, and the levels overstay their welcome like a persistent rash on a delicate area of the body (Editor’s note: They do make a cream for that. For your rash that is, no cream can help this game).

Despite the confined areas of play, and the extremely simplified graphics, there is also an issue with dropped frames. I have a pretty powerful rig with a 1070 handling the rendering end (Editor’s note: Bro, but does your rig even lift?). It hasn’t stuttered on anything I’ve thrown at it until this game. Obviously, there is something up with the optimization. This is something that can be remedied with a patch or two, but the current state of the game is extremely frustrating, especially considering the low-fi graphics. When a title is brave enough to allow free range of movement without resorting to teleportation tricks, it needs to be backed up with a stable high frame rate to avoid potential motion sickness. Fortunately, my VR legs are solid enough that I escaped unscathed, but others might not be so lucky. 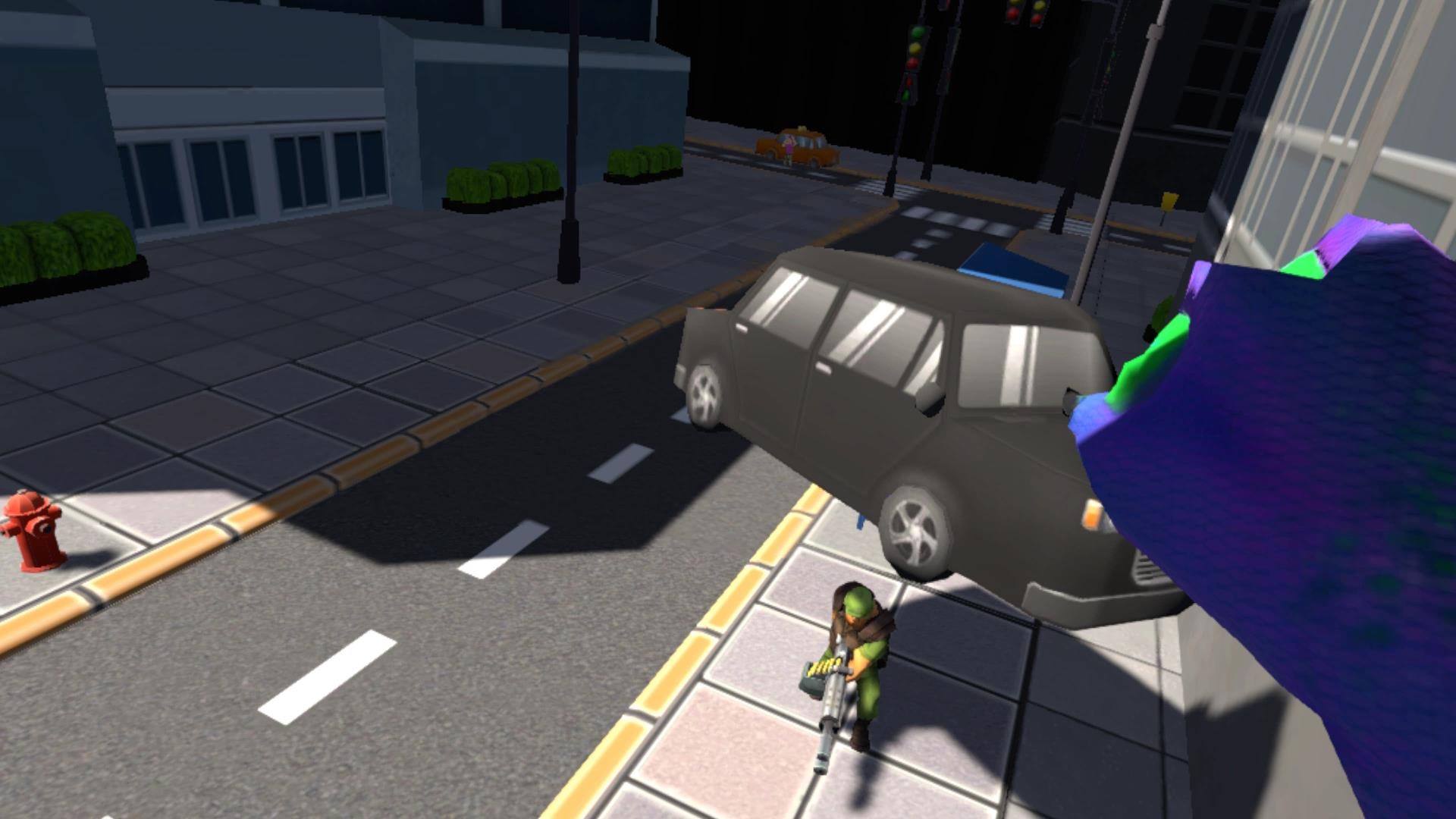 When approaching Mighty Monster Mayhem, it’s fair not to expect top of the line, wiz bang graphics. Rank17 is a low budget indie studio and needs to make some understandable compromises. Instead, it’s reasonable to hope for a title to competently take the narrow focus of emulating a game from the 80’s using simplified graphics, allowing the novelty of the input to carry it the rest of the way and have it come out playable. The developer got some of it right, but the vast majority of this game is riddled with too many cracks in the facade, indicating it was launched way too soon.