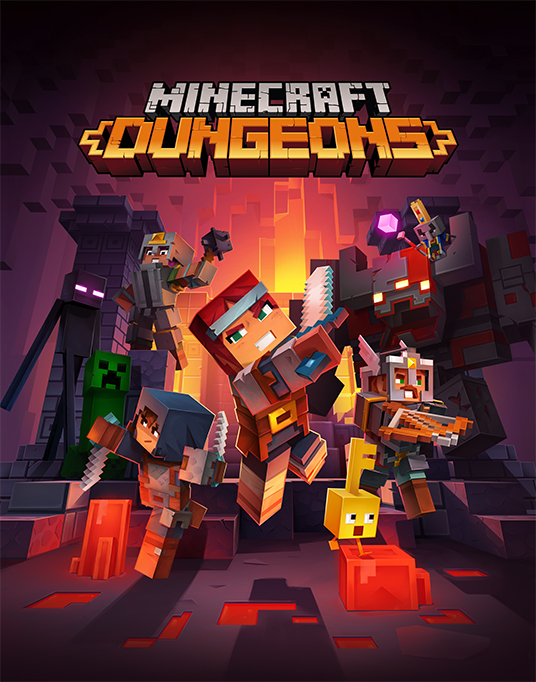 There’s probably a good reason people build dungeons.  At first it seems like a great plan to construct a subterranean labyrinth, because maybe the kingdom needs a place to store its surplus supplies or random undesirable people.  Why build a giant construct from wood and rock when there’s so much unused space underfoot, other than mining being crazy-hard to get right.  The point is, eventually all that space attracts things.  Big, mean, hungry things that no society can function around.  Zombies and skeletons are only the start of the problem, and it doesn’t take long for an evil overlord to come along and put this undead labor to use devastating the countryside.  Dungeons are an archaeological trap, useful right up to the point they’re the base for the downfall of the realm, and the ones in Minecraft Dungeons are a perfect illustration of how it all goes horribly wrong.

Minecraft Dungeons is a hack & slash action-RPG in the vein of Diablo where you take a character, beat on monsters, find better gear, and use the new toys to beat on bigger and tougher monsters.  The paper-thin plot is that an outcast villager was corrupted by an evil orb of power and down came the smiting, and only a hero etc etc etc.  The story is “hit monsters, get loot, search out secrets,” which really is all this genre needs.

The lack of plot means the action needs to carry the game, which Minecraft Dungeons nicely pulls off.  It’s a fairly stripped-down entry in the genre, with no character classes or specializations, but instead focuses on character customization through loot.  At the start you choose a character skin, none of which have any advantage or disadvantage over another, and then through the course of the adventure find gear to fit your play style.  There are six slots to fill, three of which are for action accessories assigned to the controller face buttons and the others being the equipment of weapon, armor and ranged, and while it’s tempting to go for straight power over anything else, it’s better to find things that suit your play style. 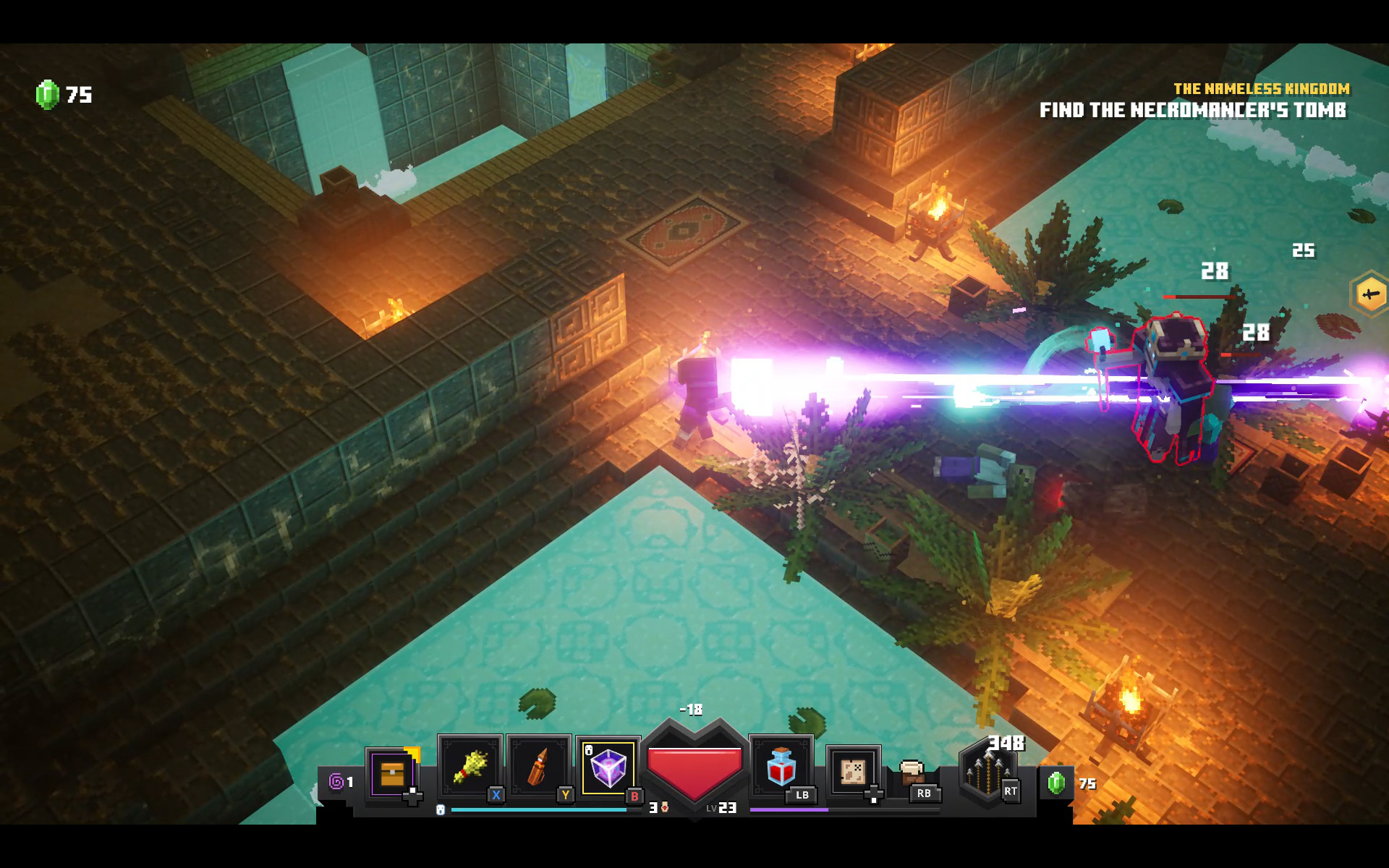 Daggers, for instance, are fast but weak, while a halberd is noticeably slower but better for slicing enemies at range.  The Spelunker armor comes with a pet bat that flies out to attack enemies for you, but the hunter’s armor gets a bonus ten arrows per pickup.  Equipment also comes with a number of abilities, further complicating the selection.  Abilities such as weaken enemies or lightning strike are only rarely pre-equipped, but rather must be chosen.  A sickle might have two ability slots with three options each, but once you’ve chosen one the other two go away.  There’s a hard choice to be made between “move faster for five seconds after dodge roll” and “heal allies in small radius” and it can take a surprising amount of thought to pull the trigger.  Each ability also can be upgraded twice and this is where character leveling comes in.

Each level grants a purple gem/swirly-thing and these are used to buy equipment abilities.  Once committed there’s no taking the gems back until trashing the item, at which point they’re refunded in full.  Level one is one gem, two is usually two gems, etc, but there are also rare powerful abilities that get more expensive.  I held on to the Harp Bow longer than practical thanks to it not only shooting five arrows per shot but also having a chance of an arrow dividing into another five on hit, despite how expensive it was to power up.  That kind of crowd control is worth saving up for, after all, but there’s always going to be more loot later that will finally make swapping out an irresistible prospect. 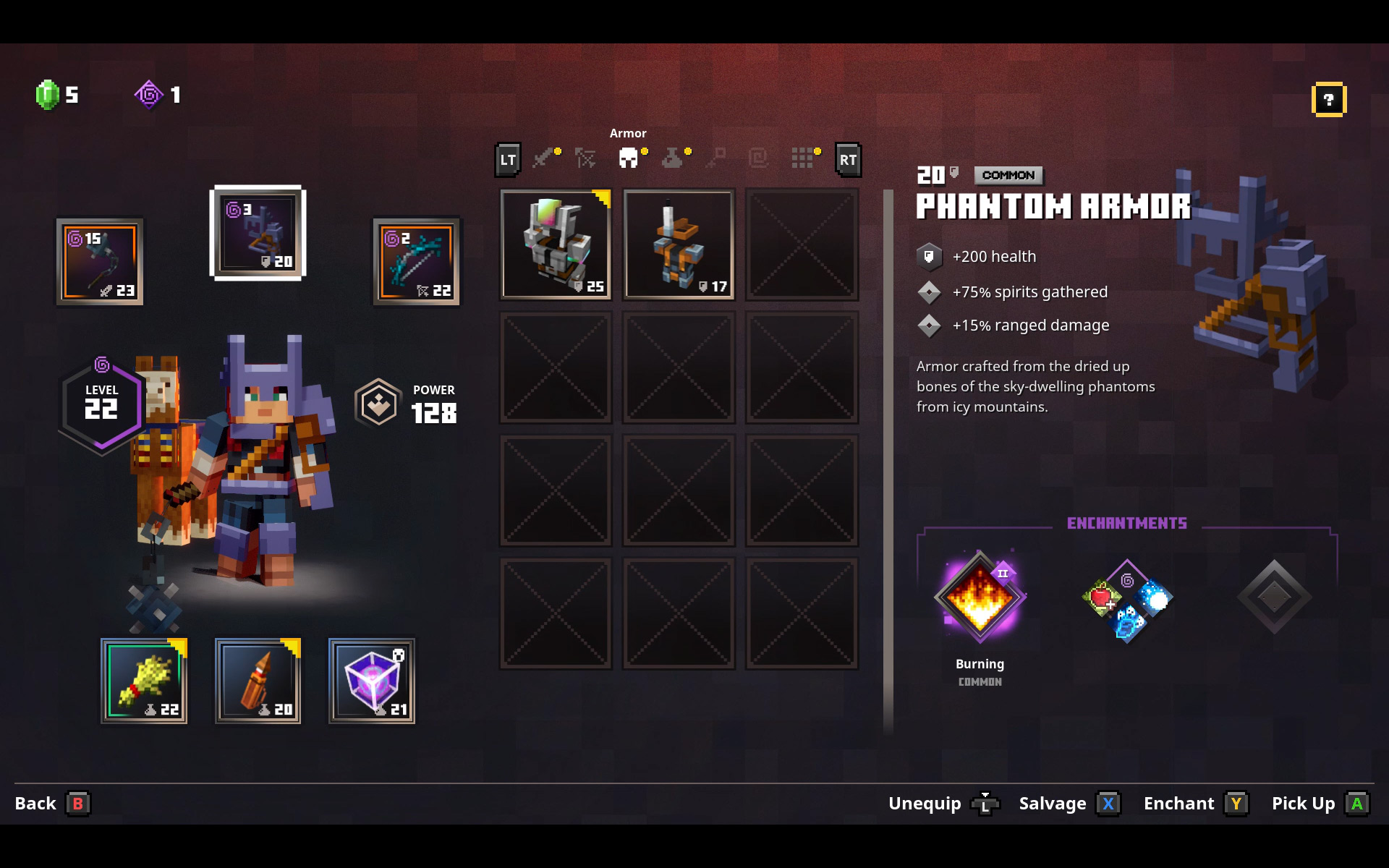 The other type of item is accessory and each one grants a different skill.  The feather, for example, does a quick roll that stuns an enemy, while the soul cube lets out a powerful arcane jet of energy blasting through everything in its path.  A bundle of wheat summons an attack-llama, there are healing pendants, berzerk mushrooms, magic shields and plenty more to turn up.  These let you create a personalized loadout of three skills, defining character class by what you choose to carry.  The more powerful accessories are powered by souls, which are released and automatically gathered as you take out monsters, but it doesn’t take many to fill the bar.  The skills are there to be used rather than hoarded.

It takes a while to build up a full arsenal, especially due to how many gems are required to level up equipment skills, but once you’ve got a foothold the game opens up into a fun combat romp.  Minecraft Dungeons is designed with younger players in mind, so on standard difficulty it’s too easy for any kind of seasoned player, but after a few levels you can crank it up to the hardest and eventually get a decent challenge that can actually run the risk of killing you.  Enemies attack in large numbers, whether they be familiar Minecraft creatures like zombies, spiders and skeleton-archers or newer threats such as the corrupted Illagers (like villagers but ill) or zombie-summoning sorcerers.  Combat is initially a simple matter of holding down the attack button and letting the combo animation play out, broken up occasionally by needing to shoot archers that don’t want to hang out in melee range.  The final levels do a nice job of putting all your abilities to the test, though, requiring regular use of magic, support pets, keeping an eye out for traps in the environment and giving the bow a good workout. 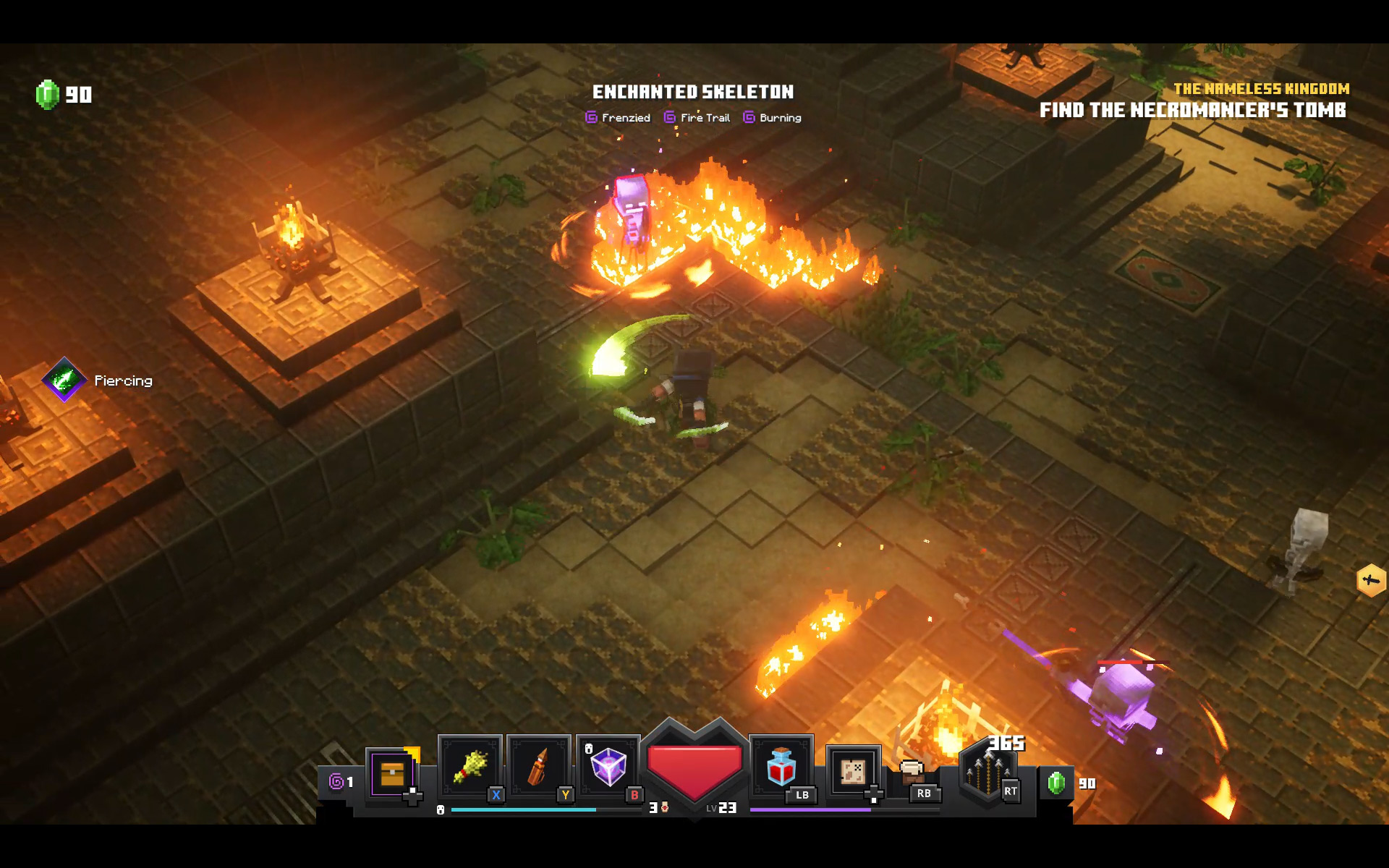 Between each level is a brief stop back at base camp, which is a fairly empty area that honestly feels like it’s missing content.  The shops let you spend the green gems found throughout the levels on a random piece of equipment or accessory, and…that’s it.  There’s a map on a table to choose the next level or you can just hit the Select button to do the same thing.  Sometimes there’s a random chest somewhere in the scenery if you wander about.  It’s a good amount of space, nicely decorated, with little in it.

The big semi-mystery of Minecraft Dungeons, though, is what this has to do with Minecraft.  It’s a fun, light action-RPG, sure, and the world needs more games parents can play with their kids, but Minecraft is a skin draped over the action rather than having any real effect on the game’s design.  Everything looks right but that’s as far as it goes.  Not a single block in the game is breakable and there’s nothing to build.  This could just as easily have been My First Diablo as anything else, and the Minecraft license ends up feeling like a check box filled in on the marketing list. 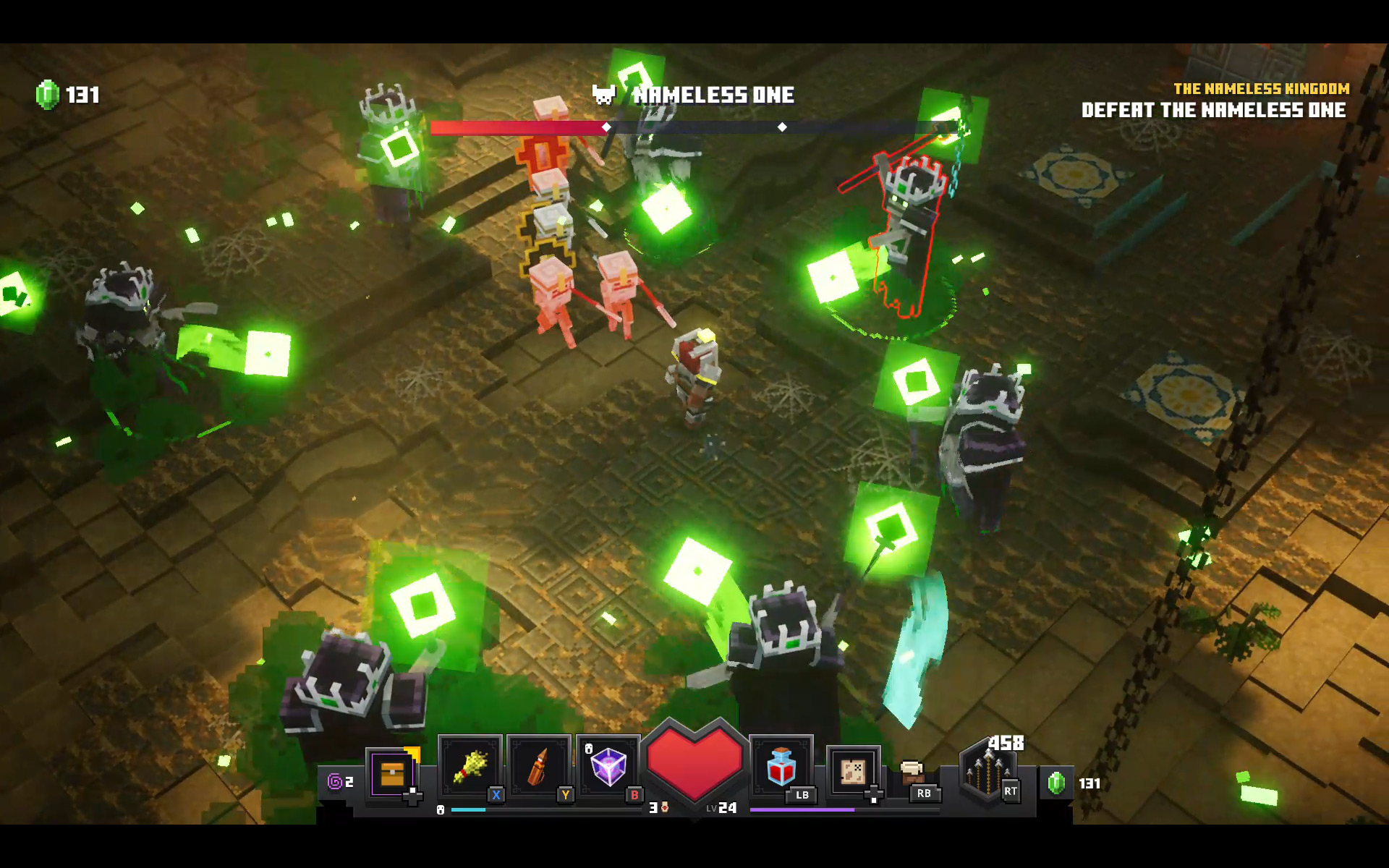 Minecraft Dungeons is a capable all-ages dungeon crawl that, while doesn’t use its license to anything like its full potential (see Dragon Quest Builders 2 for how to do it right), is still good fun once it gets moving.  The variety of enemies keeps you on your toes, and the various skills and weapons make for plenty of experimentation in figuring out the best way to take them on.  Each level has at least a couple of secrets to chase after, ranging from obvious to head-scratchingly obscure, and finding everything while collecting all the gear will keep players busy for hours whether fighting single- or multiplayer.  Just be aware that if you’ve got any experience with the genre, the difficulty selections on the levels are there for a reason.  The younger crowd deserves a good intro to the world of dungeon crawling and Minecraft Dungeons provides that nicely.